In the absence of any major news or economic indicators, the main theme in the FX market Friday was the rise in US Treasury bond yields, which pushed up US yields relative for foreign bond yields and pushed the dollar higher.

US 10-year yields started rising from the beginning of the London day, while yields of most other G10 countries (with the exception of Canada) moved lower. The dollar’s widening yield advantage pushed USD higher. 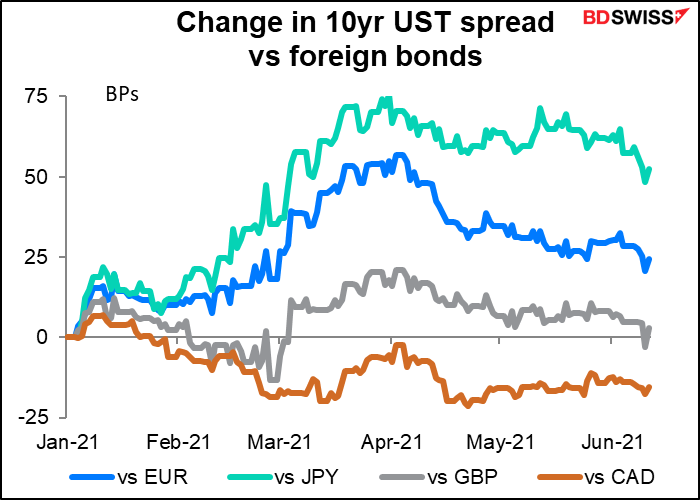 The move up in US yields was somewhat reinforced by a better-than-expected U of Michigan consumer sentiment survey, although the one-year inflation expectations unexpectedly moved lower (to 4.0% from 4.6%, whereas it was expected to rise to 4.7%).

Currencies have somewhat followed the change in the spread over US Treasuries over the last week. 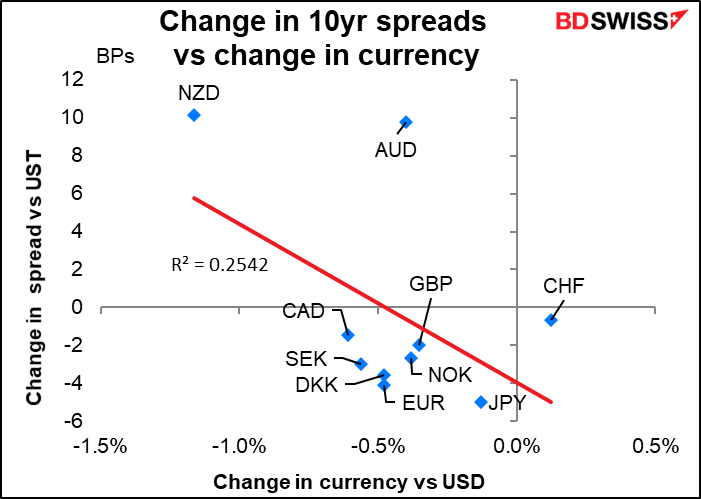 The big feature for today isn’t an indicator. It’s whether UK PM Johnson decides to end all social restrictions in the country from June 21st. An announcement is due today. It’s looking like maybe it’s going to be a “no.” According to the BBC, the PM has warned that any lifting has to be “irreversible.” A delay of up to four weeks is said to be possible.

Although UK new cases are a lot lower than they used to be (at the peak in January there were nearly 60,000 new cases a day!!) nonetheless the direction recently is worrying. Hospitalization levels are also up, especially in areas where the new Delta variant has been spreading among the unvaccinated. Fortunately, Britain has had excellent take-up of the vaccine – close to 80% have had one shot and over 55% have had both. And bookings are skyrocketing as eligibility increases – last week a record 1mn+ bookings were made in one day. The government may think it’s worth waiting a week or two for more people to get vaccinated so that they can reopen with confidence once and for all. 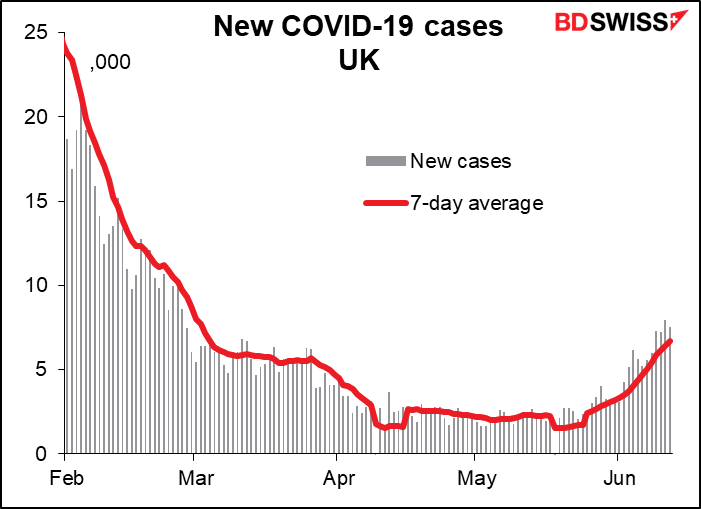 There will also be a NATO summit in Brussels today, including a meeting between US President Biden and Turkish President Erdogan.

Same story as always: specs increasing their short USD position, but this time it was only by a little bit. Most of it came through trimming JPY shorts and a modest increase in GBP and CHF longs. Otherwise specs reduced their EUR and CAD longs and increased their AUD shorts. 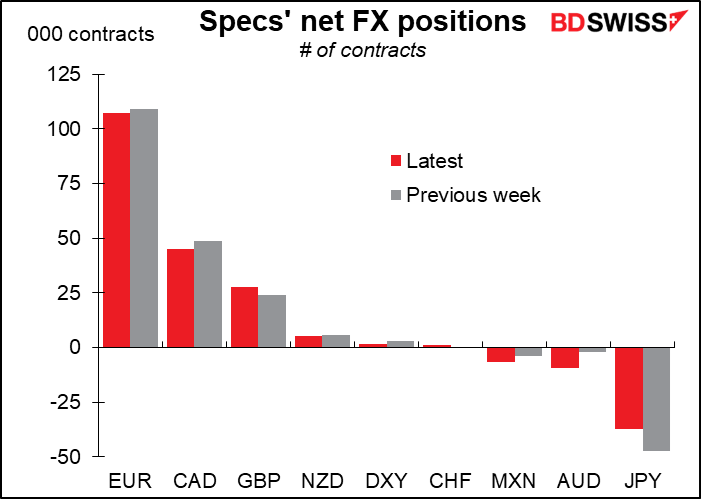 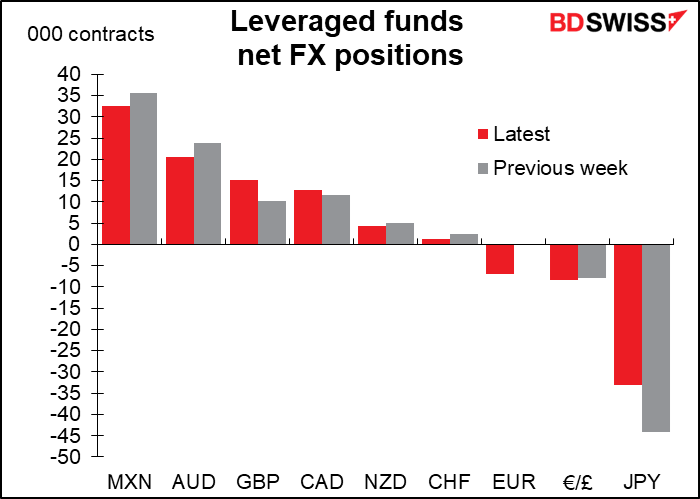 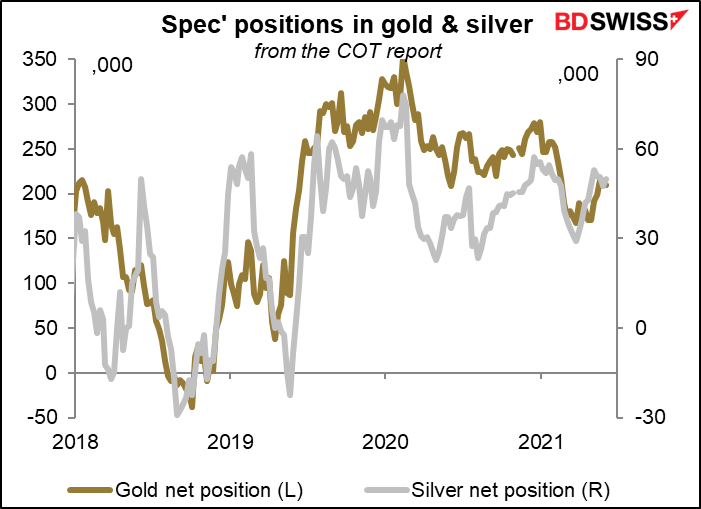 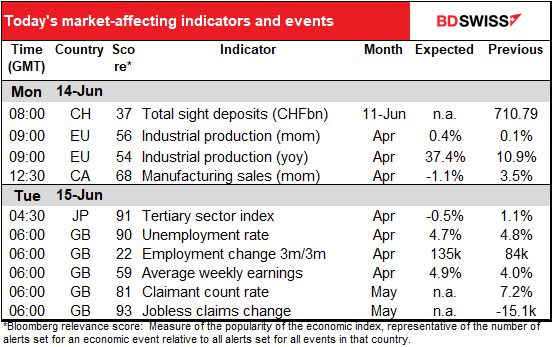 The odds are good that today will not be the most exciting day of your trading career. Or if it is, it’s not because of the economic indicators coming out today.

During the European day, we only have the usual weekly Swiss sight deposits. Not much happening with them for the previous two weeks as EUR/CHF is headed in the right direction by itself. Of course, we might find out that the upturn in EUR/CHF was due to “supernatural forces” in the FX market. Also EU-wide industrial production for April. It’s expected to be up only a tiny bit (+0.4%) mom, but that translates into an enormous yoy increase (+37.4%) because of course output collapsed in April 2020. This means all my graphs are going to be messed up like this for years. 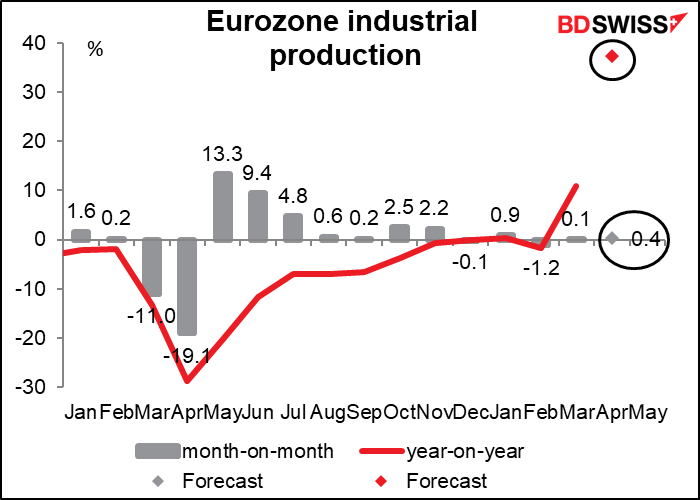 Even with that tremendous yoy increase, output would still be 1% below the pre-pandemic level. 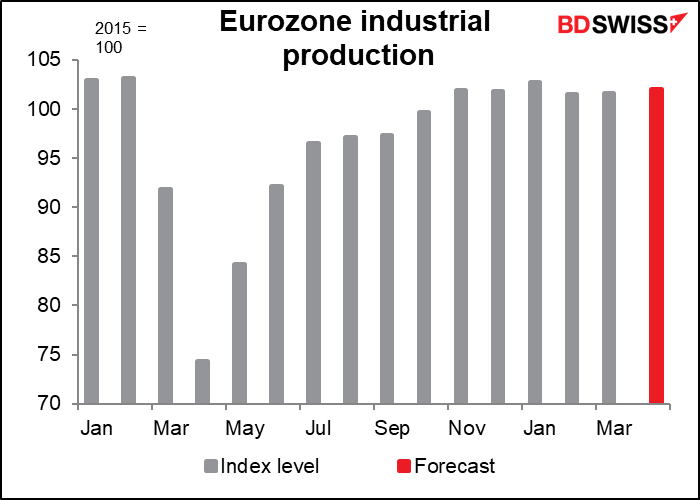 I stopped following Canadian manufacturing sales when I saw what a low relevance score it had, but since there’s little else on the schedule, here’s a graph anyway. 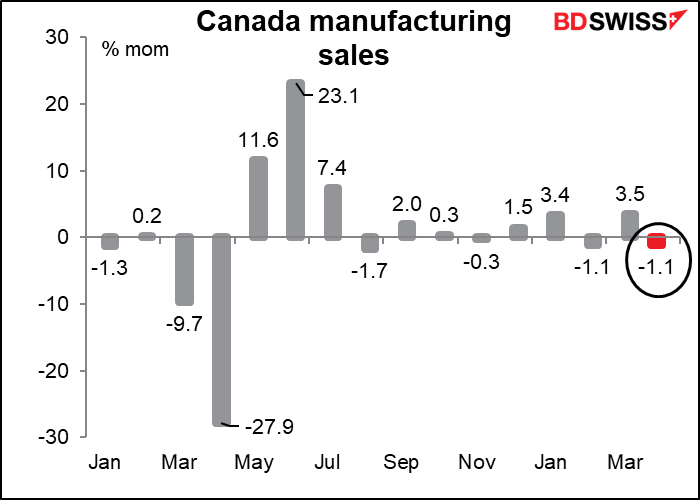 Then that’s it until Japan comes into the market – in fact, until the Japanese afternoon, when they release the tertiary sector index, which probably no one in the foreign exchange market cares about anyway. It’s expected to be down from the previous month, in line with the abysmal performance of the Japanese service sector. 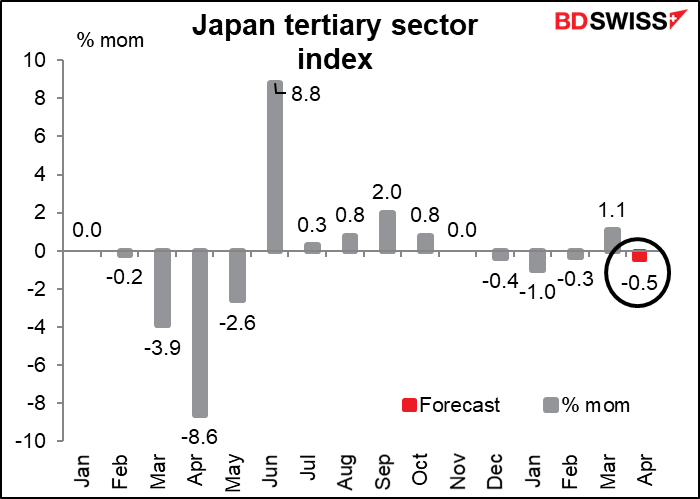 At this rate, the service sector would still be 4.4% below the pre-pandemic level of output. 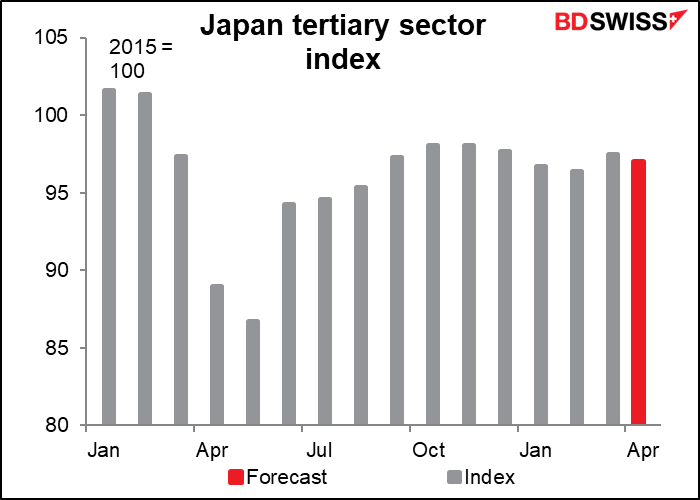 Japan’s service sector has done noticeably worse than that of other developed economies. Ok so we wait until it’s good morning time in Britain and we get the UK employment data. It’s expected to be encouraging – the second consecutive increase in employment and the largest since the pandemic began, plus a further fall in the unemployment rate. 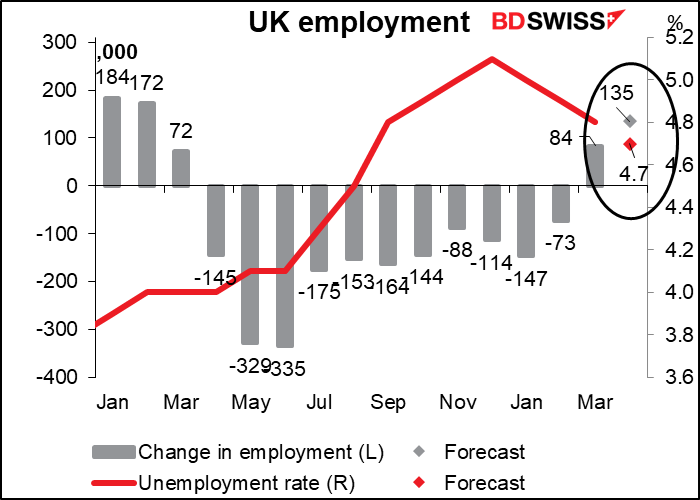 A lower unemployment rate with a higher participation rate would be doubly good. 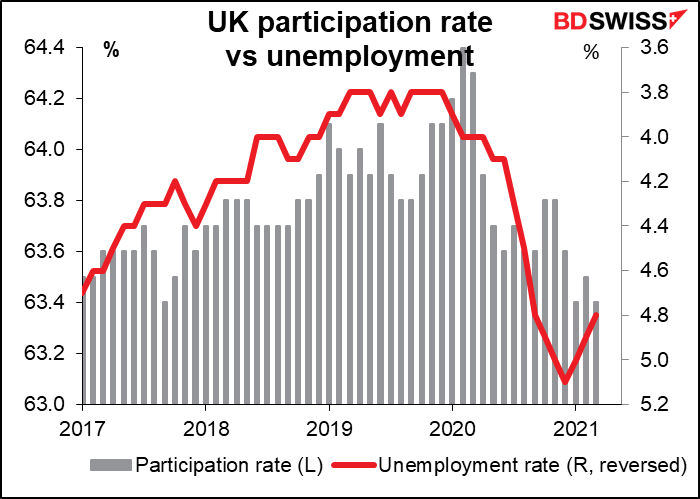 People may also start to pay attention to the change in wages as more employees return from furlough. Higher wages would mean employers might have to raise their prices =  higher risk of inflation = earlier normalization of monetary policy = higher sterling. 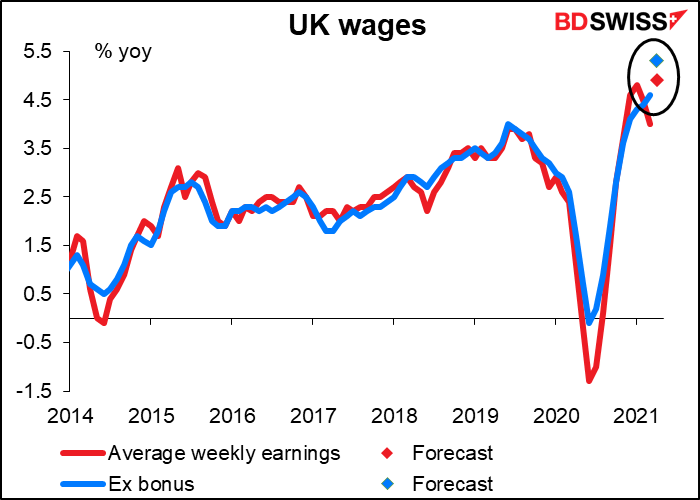 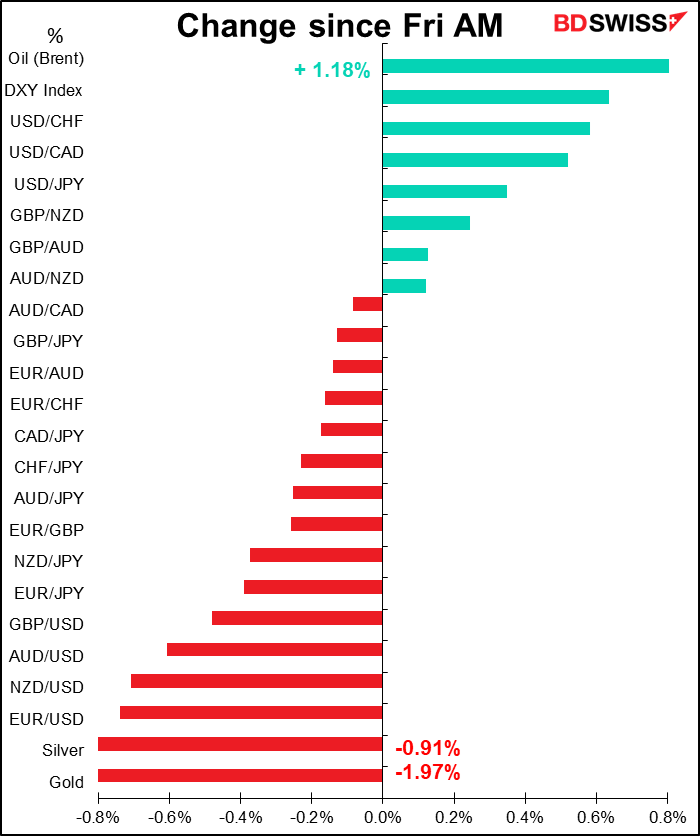