You are at:Home»MARKET PREVIEW»EUR Up, JPY Down in quiet FX Trading; US PPI, retail sales

The S&P 500, Europe’s STOXX 600 and the MSCI World index all hit record highs. In contrast, sovereign bond prices fell (yields rose) in both Europe and the US on nervousness that perhaps the Fed might decide to accelerate their timetable for tapering down their bond purchases. Ten-year Treasury yields rose 4.2 bps, their biggest daily rise in over a month and a sharp contrast to the decline in yields we’ve seen over the last month. Implied fed funds rates for end-2023 rose by about 1.5 bps. 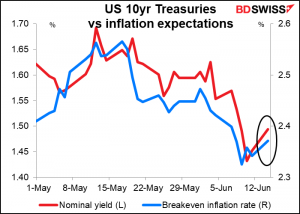 As usual, it’s hard to weave a cohesive story around FX moves of ±0.1%, which I consider to be the financial market’s equivalent of Brownian motion. (Or maybe in finance I should be comparing it to a Wiener process, if only I could understand what that is.)

There’s no particular reason why EUR should’ve been at the top of the list. Eurozone bond yields rose, but not as much as US yields did. 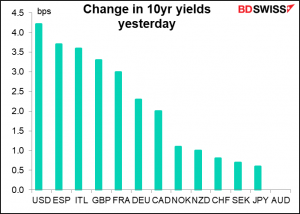 I was surprised by the resilience in the pound after PM Johnson announced a four-week delay to reopening the economy. The new date is July 19th, not June 21st as originally scheduled. The delay does not come with any additional financial aid to companies, which will have to start kicking in 10% of the cost of furloughed employees plus start paying some local taxes on businesses that had been suspended. 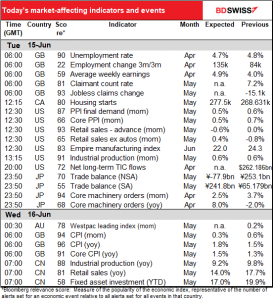 The UK employment data is already out. It was slightly worse than expected (employment change a bit lower) but the key point in my view is the much-higher-than-expected rise in wages. This is bound to be a point of discussion at next week’s Bank of England meeting. It’s positive for GBP as it makes normalization of monetary policy more likely.

While normally the US retail sales would be the big indicator of the day, today I think it’s the producer price index (PPI), because inflation is the market’s main concern nowadays. Economists will be picking through the details to see what components might point to a more lasting inflationary impetus from upstream. 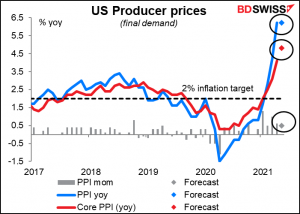 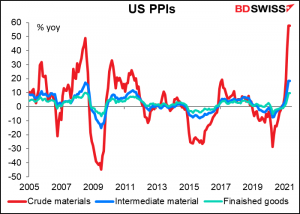 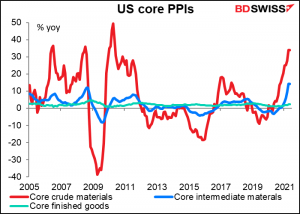 Later today I’ll be posting a separate piece comparing the PPI with the CPI and discussing how they influence them. Look for it in our Market Insights section.

US retail sales are a major US indicator. They’re expected to decline after two months of strong sales. 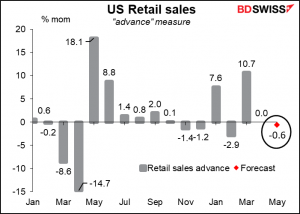 Even so, the consensus forecast would put sales17.1% above the pre-pandemic level – far better than other major countries. 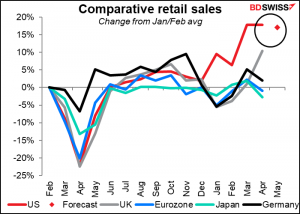 The main reason for the expected fall in May is a decline in auto sales during the month. Apparently, a lot of people used their March stimulus payments to go out and buy a car.

This is good news for the inflation data, by the way. Remember that one-third of the rise in the headline CPI in both April and May was caused by a rise in the price of used cars. Bt if demand for cars is starting to wane, then price rises are likely to wane, too. 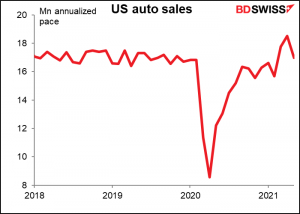 Excluding autos, they’re expected to be up a bit. This is likely to confirm the narrative of a demand-driven rebound in the US economy, which should be good for stocks but negative for the dollar. 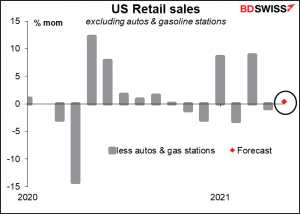 The Empire State manufacturing survey is expected to be down a bit, as is the Philly Fed survey, which comes out on Thursday. But this is not significant as they’re both at relatively high levels and still expected to be signaling a robust expansion. 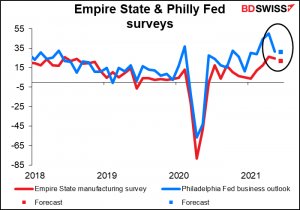 In any case, people will probably be looking more at sub-indices such as order backlogs and prices paid indices to judge inflationary pressures – which as you can see are quite high. 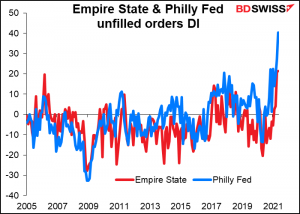 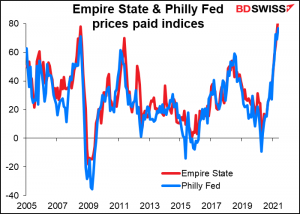 US industrial production is a big indicator for the stock market, especially for manufacturing stocks, but not so crucial for the FX market, according to my research. In any case another month of solid increase should only confirm the narrative that the US economy is recovering nicely, which is what the retail sales and Empire State index should show, too. 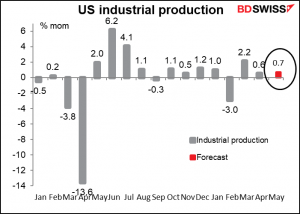 Then that’s it until Japan opens up for business.

Japan’s trade balance is expected to move further into surplus on a seasonally adjusted basis. 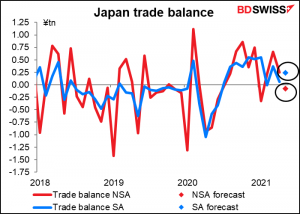 Both exports and imports have been recovering nicely. The trade surplus is likely to rise further as the global economy recovers. Economic theory says that a higher trade surplus should boost the yen, but if at the same time it increases Japanese investors’ confidence in the global economy it could increase capital outflows and thereby weaken the yen. Nowadays it’s capital flows, not trade flows, that determine a currency. 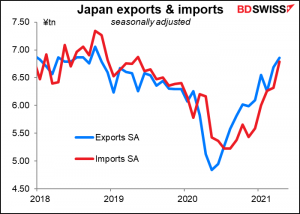 Japan machinery orders are expected to be up for the second month in a row. Personally, I find this series to be too volatile to make much sense out of it, but the market places a lot of importance on it. 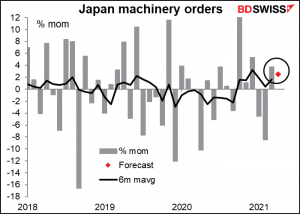 Then we wait until the sun rises over the mighty Thames and Britain releases its May consumer price index. This is an important indicator ahead of next week’s Bank of England meeting. It’s expected to be up 1.8% yoy, almost the mid-point of the Bank’s 1%-3% target range. This should come as no surprise to the Monetary Policy Committee. At their meeting last month they said, “In the central projection, CPI inflation rises temporarily above the 2% target towards the end of 2021, owing mainly to developments in energy prices.” They said this was “transitory” and that they expected inflation to return “to around 2% in the medium term.” Still, hitting the target could tilt them toward a more hawkish stance, which could be positive for GBP. 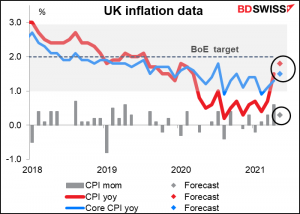 And for some reason, after that China announces its usual trio of retail sales, industrial production, and fixed asset investment. Usually it’s released at 02:00 GMT, I don’t why it’s being released at 07:00 GMT. These figures are only given in terms of year-on-year change, and considering what was happening in May 2020, we can’t really divine much about the state of the world by looking at the yoy change (except to note that things are substantially better than they were a year ago, which I think is obvious to most of us in the developed world). 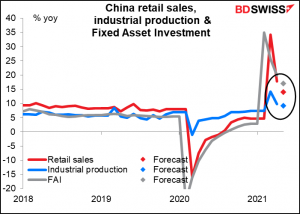 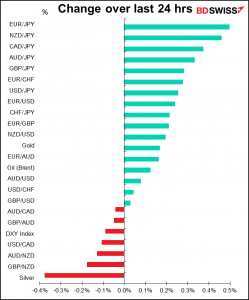