While the world watched live streaming of scenes that could’ve been from the French or Russian revolutions – minus the bloodshed, fortunately – it was  Georgia on My Mind for the financial markets. As Trump gets ready to go out “onto the dustheap of history,” the Biden administration now has control of all the levers of government:  both houses of Congress and the White House. This dominance should enable the new leaders to pass (much of) their agenda, which means more fiscal stimulus and a faster recovery. That’s good for risk assets and the reflation trade, but bad for the dollar.

The signs were evident in stock and bond markets around the world. In the US, bond yields rose while the yield curve steepened. This indicates the market expects stronger economic activity (and/or more bond issuance – I’d say both, probably) but for the Fed to keep short rates unchanged for some time. 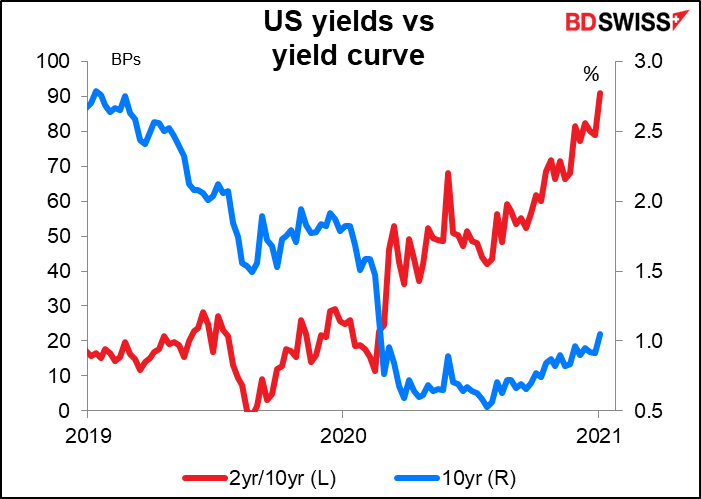 The price of high-yield (i.e., risky) corporate bonds has almost returned to its level of a year earlier. 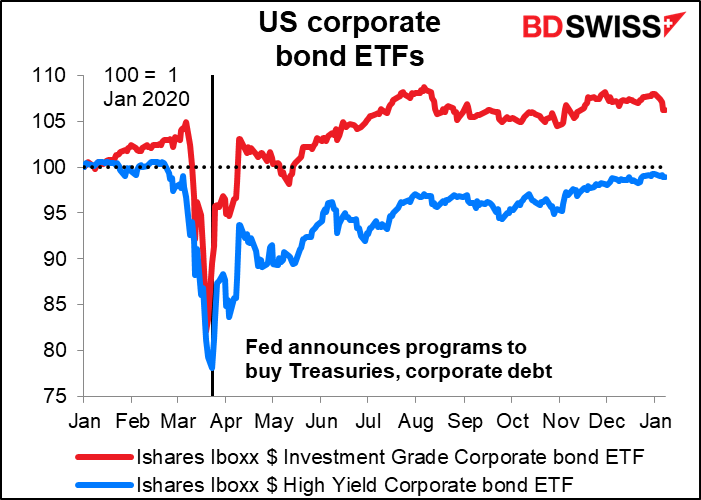 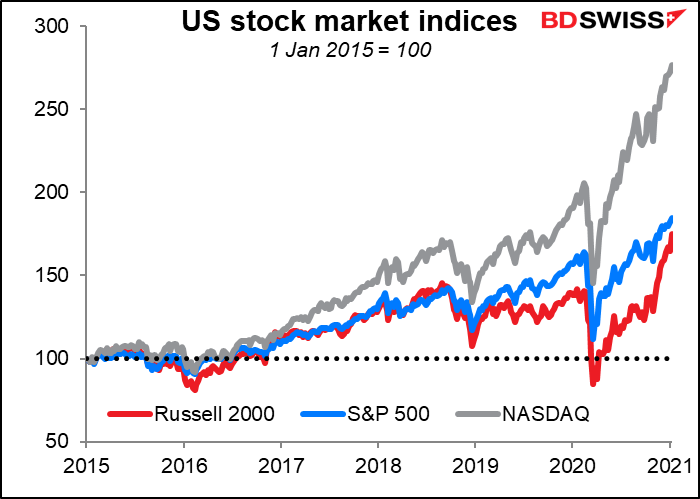 The trend wasn’t just confined to the US. In Europe, spreads of risky peripheral bonds tightening in relative to Germany (= risk-seeking behavior) even as yield rose overall (= expectations of faster economic activity). Italian spreads tightened to a four-year low while the Spanish 10-year spread fell to its lowest in over a decade. 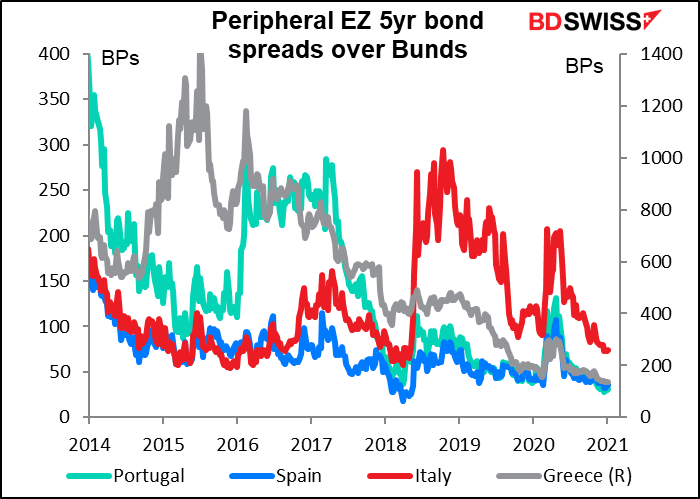 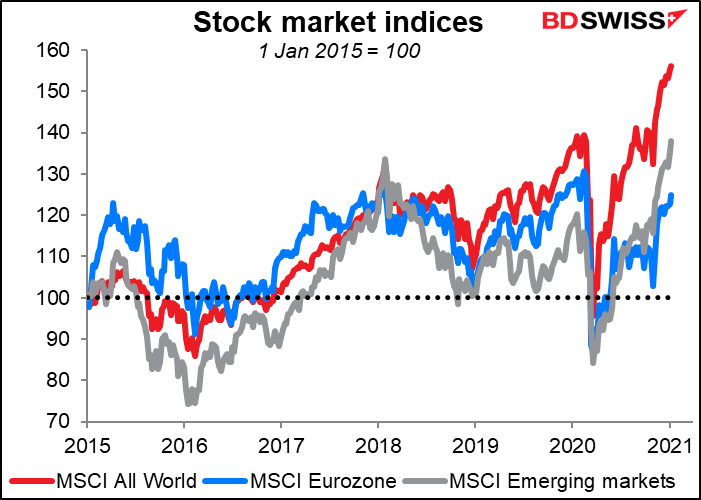 The assumption is that US economic growth – and therefore global growth – will be stronger than it would have been had the Republicans maintained their palsied and necrotic grip on the US body politic. But at the same time, interest rates are expected to stay low indefinitely, both in the US and elsewhere. Interest-rate futures markets don’t see any rate hikes in much of the developed world until 2023 at the earliest. 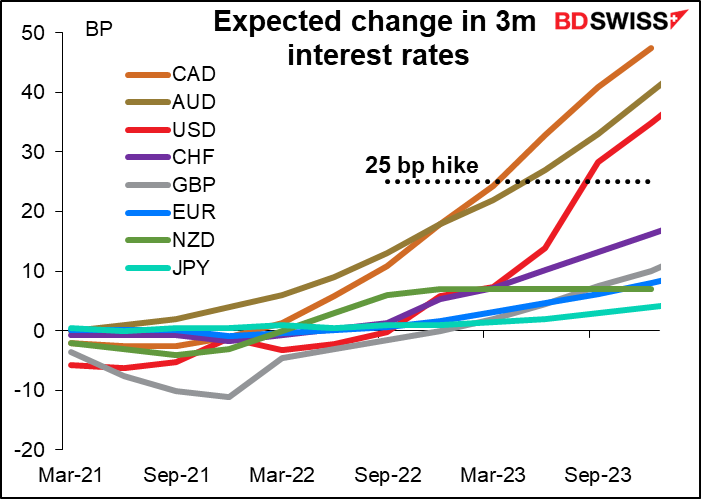 What this means for currency markets is clear: 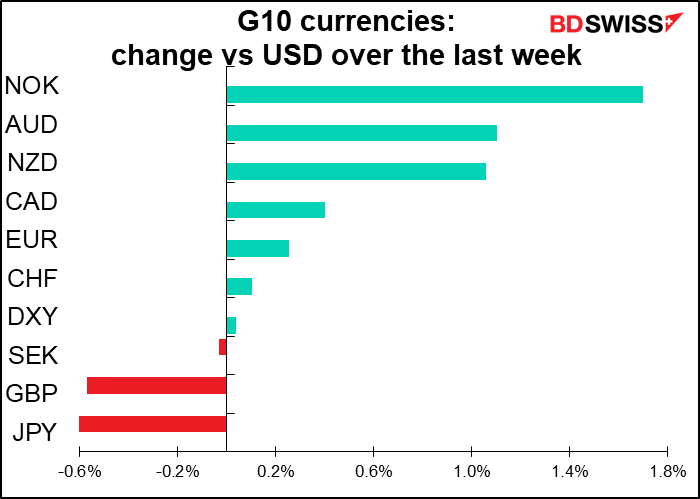 US politics:  the endgame?

Following Wednesday’s astonishing scenes of mayhem in the US Capitol, there are increasing calls for the government to do something about Trump. Another impeachment bill is in the offing and there is talk that some Cabinet members are considering exercising their ability under the 25th Amendment to the US Constitution to declare a president “unable to discharge the powers and duties of his office” and replace him with the Vice President. Leaders of the Democrats tried to call the VP to urge him to do this, but unfortunately the VP refused to take their phone calls, which suggests it’s not likely to happen. Meanwhile, a whole bunch of rats deserted the sinking ship administration officials have resigned in the wake of the events, including two Cabinet ministers.

Who knows what removing Trump from office at this late date would do? Ideally it might split the Republican Party. Trump and his allies could form an extreme right-wing party and the remainder could form a traditional center-right party. Trump was recently named the most admired man in the US in a Gallup poll, with 48% of Republicans choosing him – but I’m sure if they asked who the most reviled man in America was, he’d win that poll too. Splitting the Republican party into a Trump- and non-Trump wing therefore makes a lot of sense philosophically. That could open up a new era in US politics.

As for Trump, the rumor is that he’ll abscond to his Scotland golf resort the day before the inauguration. Unfortunately the country is on Tier 4 lockdown and entry is only allowed for essential purposes. Scottish First Minister Sturgeon has said that “Coming to play golf is not what I would consider to be an essential purpose.”  I still expect him to defect to Russia, where he will build Trump Tower Moscow, which by the way renewed its domain name this year. We’ll see soon enough!

This week:  US CPI, retail sales

The second week of the month normally has fewer indicators of interest, although this week a number of them sneak in on Friday. The question is, will anyone be interested in them to begin with? There wasn’t a whole lot of discussion about the statistics this week. The surprise decline in the ADP report, the Institute of Supply Management (ISM) soaring “prices paid” index, better-than-expected jobless claims…nothing seems to have moved the dial significantly. US politics has been dominating the market, because after all that will affect the outlook for the next four years. Besides, many market participants are glued to their desks staring at unbelievable events being beamed live into their browsers. I was a history major in college and took classes in the French Revolution and the Russian Revolution, but I never thought I’d see scenes like those I read about played out in Washington. What we need is for someone like Trotsky to tell Trump “You are bankrupt. Your role in history is played out. Go out where you belong – onto the dustheap of history.”

There are no central bank meetings, but there are a number of Fed speakers, including Fed Chair Powell on Thursday at “a virtual event of Princeton University.” No details available yet.

The US consumer price index (CPI) on Wednesday used to be the main event of the second week of the month, but nowadays people aren’t so excited about inflation. First off, inflation is dormant – at the moment, deflation seems to be more the concern than inflation. Secondly, since the Fed has shifted to average inflation targeting, inflation isn’t going to trigger any reaction from the Fed until it gets much much higher. Chicago Fed President Evans, admittedly a long-standing dove and now a non-voter, Tuesday it would “not be so bad” if inflation hit 3%.

The Fed doesn’t see much danger of that any time soon, though. According to the minutes of the latest FOMC meeting, the Committee members expect prices of goods and services affected by the pandemic to continue to be weak during the winter as concerns about the virus intensify. Prices may start to rise later in the year as activity gets back to normal after the widespread distribution of vaccines, but “a couple of participants suggested that, as a result of ongoing technology-enabled disruption to business models and practices or lasting pandemic-induced restraint on firms’ pricing power, downward pressure on inflation could persist.” They don’t expect even to hit their 2% inflation target until 2023, much less exceed it.

In any case, the market consensus forecast for next week is for a slight rise in the yoy rate of increase in the headline CPI but an unchanged rate of change in core CPI. No big worry. 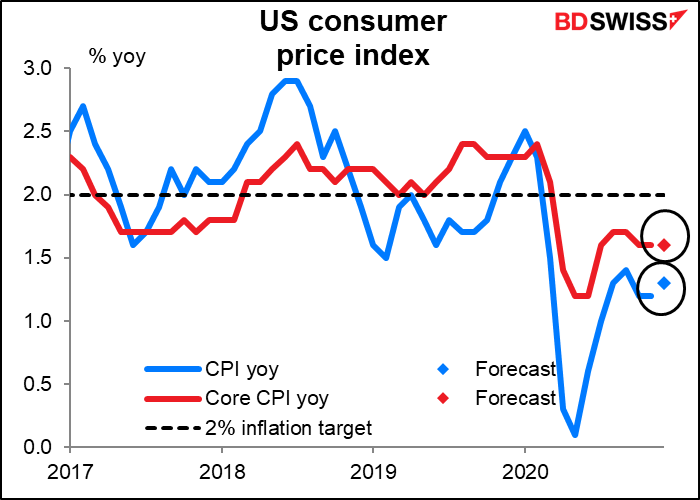 US retail sales, out on Friday, are not expected to do particularly well. They’re forecast to be down mom for the third consecutive month. This is only to be expected though as many people were no doubt worried that their supplementary benefits would run out at the end of the month. 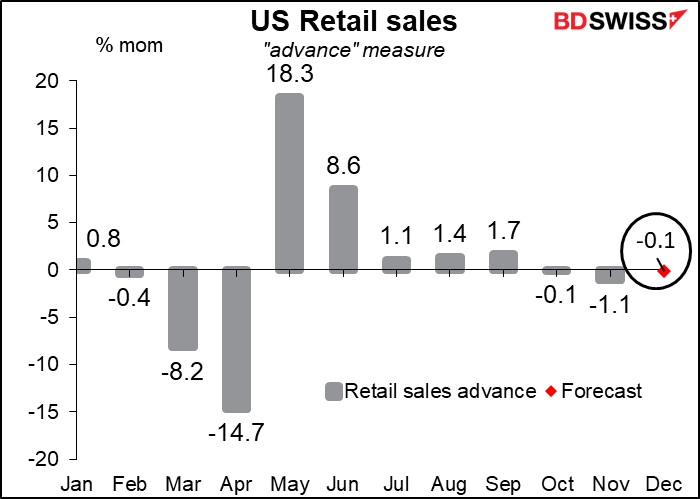 Even with three consecutive months of decline though retail sales are expected to be 3.3% above the pre-pandemic level. This shows how the government’s support has been keeping the economy afloat and what a disaster it would’ve been if they hadn’t renewed the payments, even at the miserly level that they did.

Given the headwinds, I think a small decline like this would be considered as good as could be expected and should not derail sentiment. 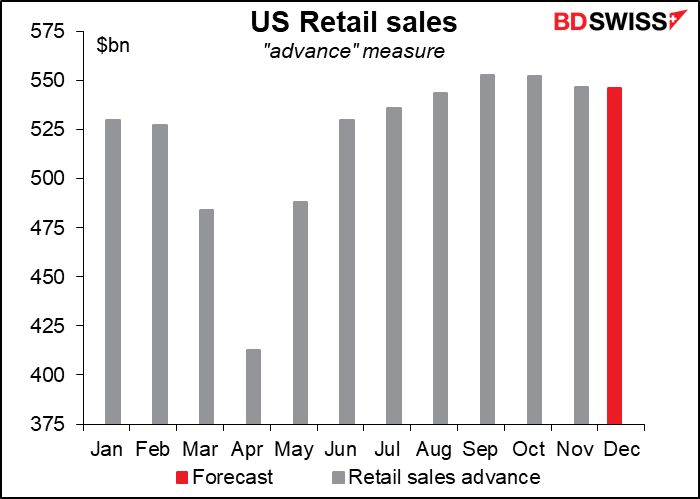 Meanwhile US industrial production, which comes out 45 minutes after the retail sales figure on Friday, will 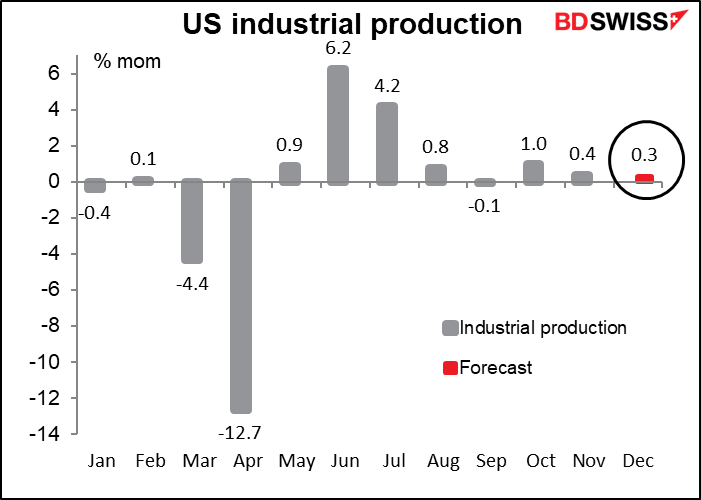 Anyway this is about parf or the course internationally. It shows the US in line with other major countries, neither far ahead nor behind. 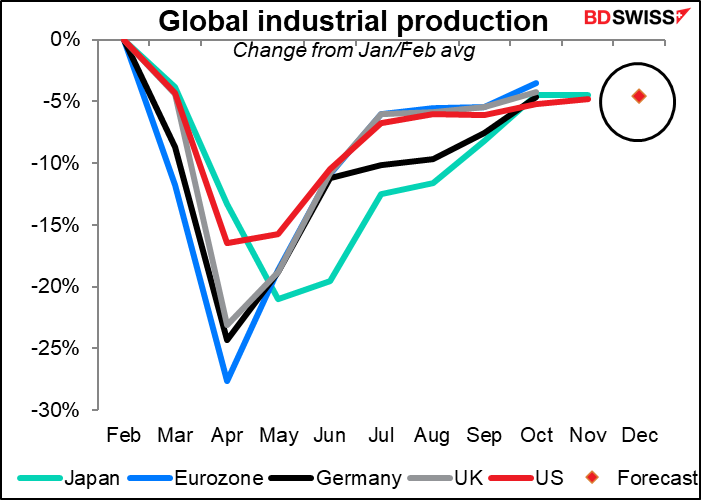 The US also announces the Job Offers and Labor Turnover Survey (JOLTS) report on Tuesday, which may see a revived interest in coming months when former Fed Chair Yellen, a close follower of this indicator, becomes Treasury Secretary, and the Empire State Manufacturing Survey on Friday, which will give us the most up-to-date reading on US manufacturing.  The Fed releases the Beige Book on Wednesday, as always two weeks before the next Federal Open Market Committee (FOMC) meeting.

It’s short-term indicator day for Britain on Friday. That sees the release of monthly GDP, industrial and manufacturing production, and the trade balance.

The GDP figures are probably the most important, and they’re expected to be poor. The market is looking for the steepest mom decline in output since the big global fall in April. And December and January are likely to be even worse as the country went into an even stricter lockdown. 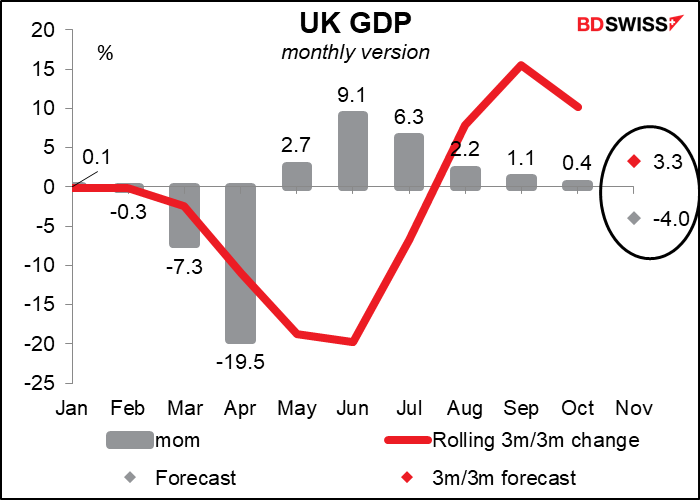 But I don’t think the indicators are the main issues for Britain nowadays. I think the market is focusing on two other things. One, the pandemic is spiraling out of control as the government’s handling is an absolute disaster. This debate about giving the second dose of the vaccine is unbelievable – why are government ministers even expressing an idea about something that should be left up to experts? 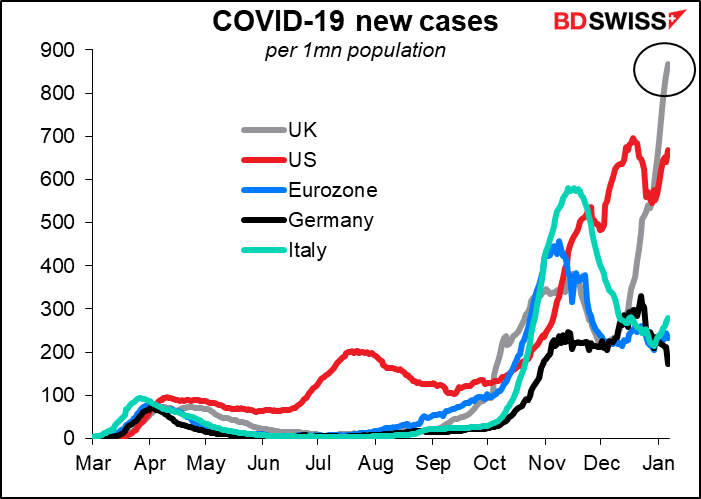 Secondly, every day the papers are filled with new problems that they’ve found in the Brexit agreement. A typical headline in the FT:  With Brexit done, reality dawns that frictionless UK-EU trade is no more The one that got me was UK retailers stumped by post-Brexit trade deal with EU; Brands review supply chains to Europe threatened by terms of accord with Brussels I’ll be honest, I read it but I was stumped too. I couldn’t understand it. No one seems to know what happens when a company imports something into England and then tries to distribute it to Northern Ireland, which is still in the EU while still in Britain. It’s sort of like a qubit that is both positive and negative at the same time. That may work on the quantum level but it’s hard to manage a country like that. I think the pound is likely to suffer further as the problems with the Brexit agreement and the invisible barriers it throws up to trade become clearer.

Japan is also having its problems with the virus. Although its caseload is nothing on an international comparison (4k cases a day for a country of 127mn, vs 58k cases a day for the UK’s 67mn), the rapid increase and the discovery of the new, more contagious strain is worrisome. 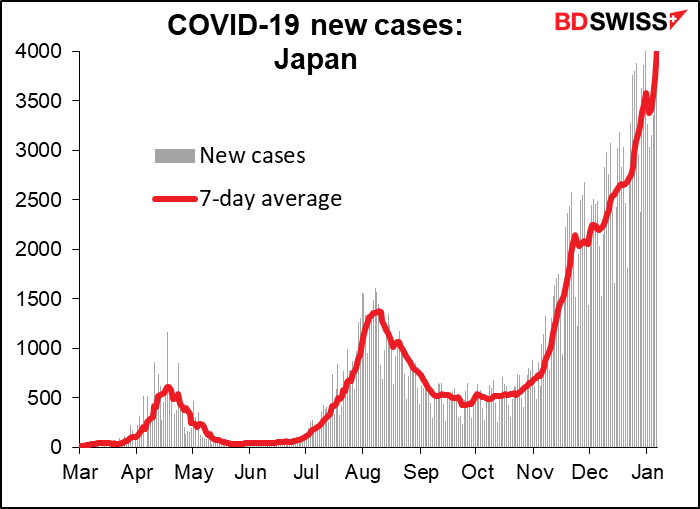 The country’s regulations are not very stringent, and even the “state of emergency” that was declared for Tokyo and the surrounding area this week is not particularly harsh – most of the measures are voluntary. PM Suga asked the public to avoid going out unnecessarily in the evening and said there would be restrictions on sporting and cultural events. Restaurants will be asked to close by 8 PM. However, shops and schools will remain open. Japan tends to have better compliance with voluntary measures than Western countries do, but not as much as China, where they welded peoples’ doors shut. I think the rising virus cases could be a “risk-off” factor for the yen even while the general global mood improves. That could mean JPY gaining on CHF, or growth-sensitive pairs like AUD/CHF or NZD/CHF doing better than AUD/JPY or NZD/JPY. 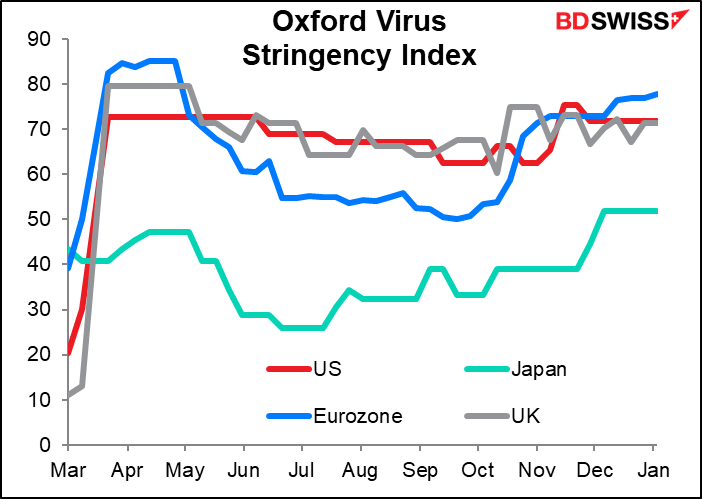 As for the country’s indicators, Japan announces its current account balance on Tuesday. The market follows the non-seasonally adjusted figure for some reason (probably because for many years the country’s seasonal adjustment was pretty bad, although that problem has been fixed). I prefer to look at the seasonally adjusted forecast. Now what’s called the “consensus forecast” is the median of all the forecasts on Bloomberg, and this time it happens to be exactly the same as the previous month. So that’s the forecast – unchanged. If that’s it, I wouldn’t expect much impact. It might be seen as slightly negative for the stock market though as people would probably like to see the trade surplus continue to rise. 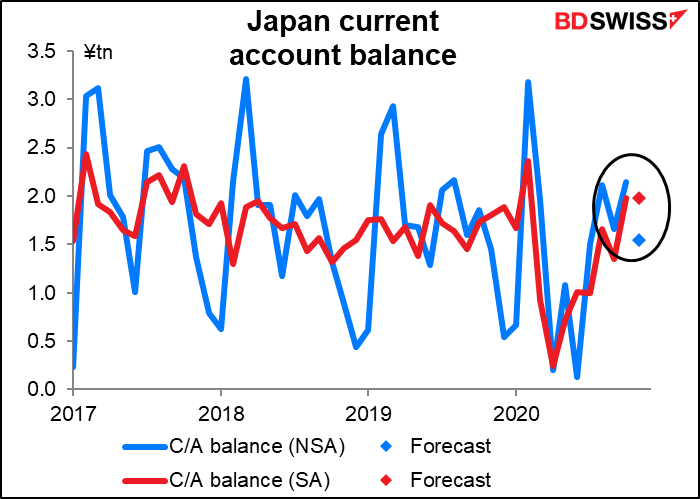 Also machinery orders come out on Thursday, but I don’t like that indicator so I’m not going to write about it.