You are at:Home»MARKET PREVIEW»GBP up with more Hawkish Bank of England; US Nonfarm Payrolls 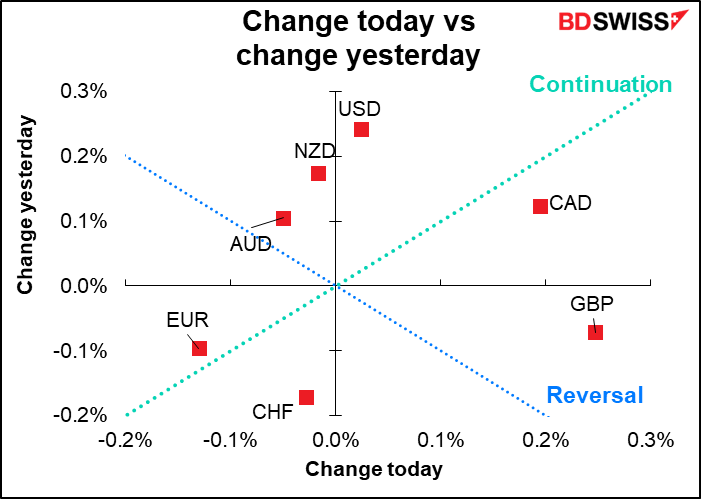 Not that much action in FX overnight. While the Euro STOXX 600, S&P 500, and NASDAQ all hit record highs, movement in the FX market was muted.

GBP was the best-performing currency, although the gains were modest, as the Bank of England took a more hawkish stance, but not necessarily more hawkish than the market had expected. (In fact most of the move in GBP/USD took place before the meeting, not after.) The 7-1 vote on asset purchases (one member voting to stop purchases “as soon as practical after this meeting”) was slightly disappointing as many people had expected a 6-2 vote. 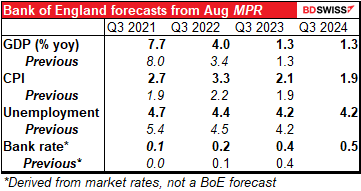 The forward guidance changed completely. They now specifically say that “some modest tightening of monetary policy” is likely.

The Committee judges that, should the economy evolve broadly in line with the central projections in the August Monetary Policy Report, some modest tightening of monetary policy over the forecast period is likely to be necessary to be consistent with meeting the inflation target sustainably in the medium term.

This is totally different from the guidance from the previous meeting:

The MPC will continue to monitor the situation closely and will take whatever action is necessary to achieve its remit.  The Committee does not intend to tighten monetary policy at least until there is clear evidence that significant progress is being made in eliminating spare capacity and achieving the 2% inflation target sustainably.

As for the question of sequencing, the Bank confirmed that it would start hiking rates first and only later begin unwinding the mountain of bonds that they’ve acquired through their Quantitative Easing (QE) program. They said that would begin reversing their QE program when rates were at 0.5%. This is much lower than the 1.5% rate that they set before. However, at 0.5% they would only stop rolling over existing debt; they won’t start actively selling bonds until rates hit 1.5%. Heaven knows when that might be. Note that the rate forecast in the table above doesn’t hit 0.5% until Q3 2024, so we’re talking at least three years down the road. (NB: that forecast is derived from market rates and is not an official Bank of England forecast.)

Furthermore, the Bank said it was now in a position to implement negative rates if necessary, although their view makes it clear that they don’t think it will be — quite the contrary.

Overall, the results were a hawkish tilt to their thinking but no more than what people had expected. In particular, the pace of tightening is not likely to be that rapid. Accordingly, there’s little reason for this announcement to boost the pound. 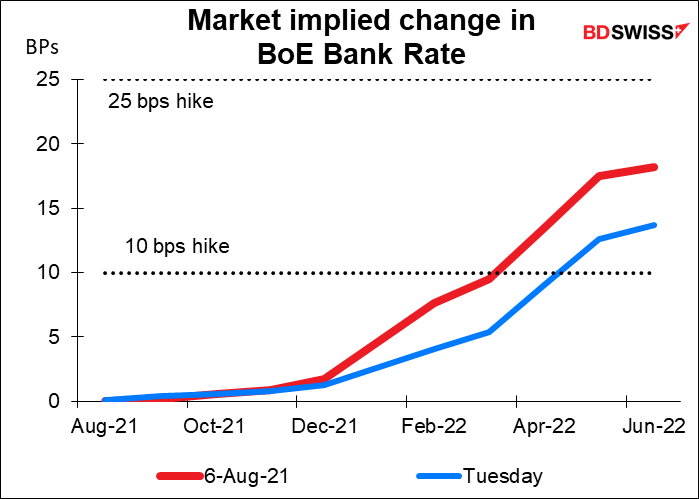 However aside from an earlier start, there seems to be no thought that the tightening might proceed faster than previously expected. Hence the “hawkishness” of the statement and its impact on the currency was limited. 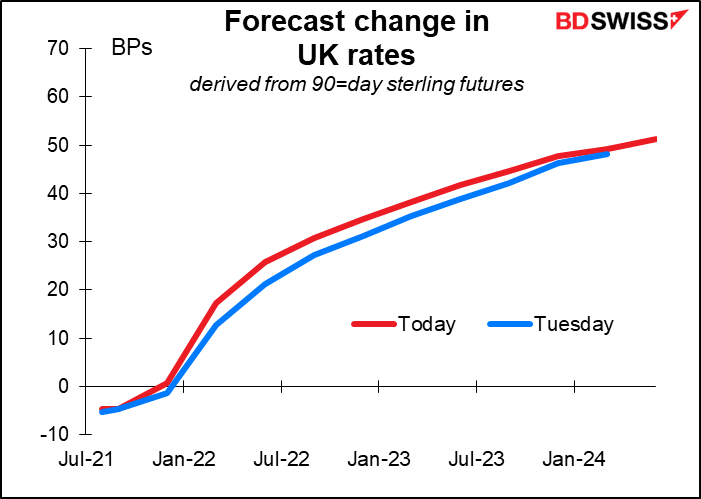 Meanwhile, AUD is under pressure from falling iron ore prices. The price of 62% Fe Australia to China CIF has fallen 22% since peaking on July 16th, with other grades falling similarly. 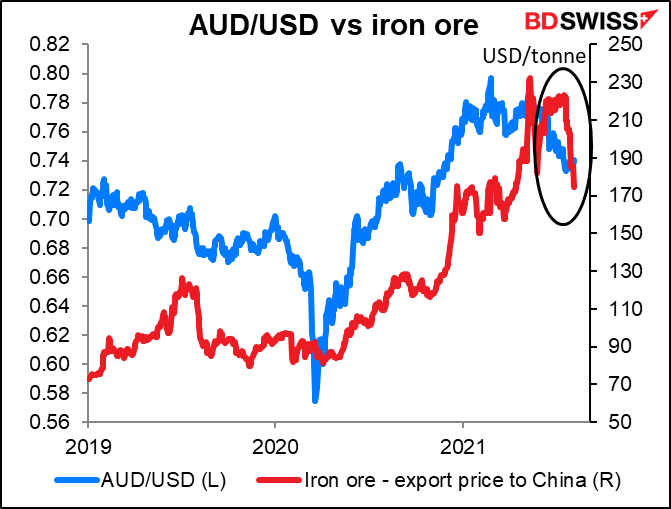 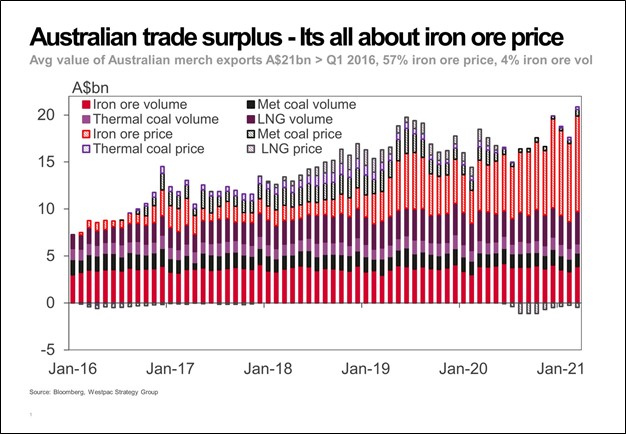 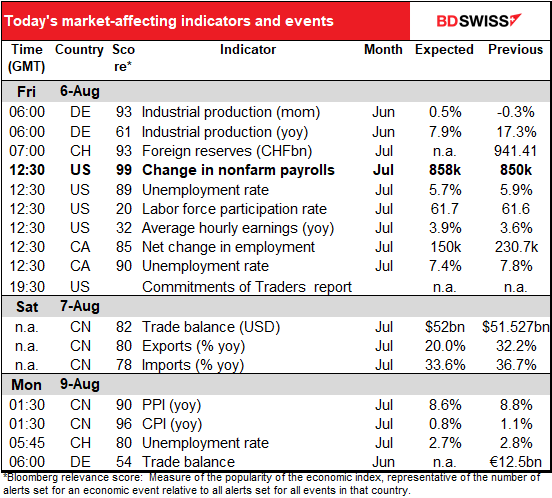 OK gang – it’s NFP day! The markets are likely to be holding their collective breaths today until the fabled US nonfarm payrolls hit the wires.

Although the NFP is the big number that everyone watches, in fact there is nearly limitless data available about the US labor market. The Fed has said that they want to see “substantial further progress” toward their goal of “maximum employment” before they begin tapering down their bond purchases. When asked what would constitute “substantail further progress,” Fed Chair Powell replied, “We monitor a broad range of data about different aspects of the labor market… and we look at all of it to try to arrive at a picture of what is maximum employment.” In this week’s Weekly Outlook (A picture of Maximum Employment) I illustrated several of the metrics that he mentioned.

The NFP is far from the only number they would use to evaluate labor conditions. Nonetheless, it does seem to sum everything up for the market: is the number of jobs increasing, and if so, at how rapid a pace?

The nonfarm payrolls (NFP) are expected to be good, but one good figure isn’t a string. It’s expected to constitute “further  progress” toward the “maximum employment” goal, but not “substantial further progress.” The Fed will have to see several months of such figures for it to be “substantial.”

The median of forecasts on Bloomberg is currently for payrolls to be up 858k, but forecasts range from 350k to 1200k. The consensus would be a good number but still a little disappointing. It would show little improvement from June and would still be below the +916k in March.

A week ago by the way the market was looking for +925k, which would’ve been a bit higher than March. 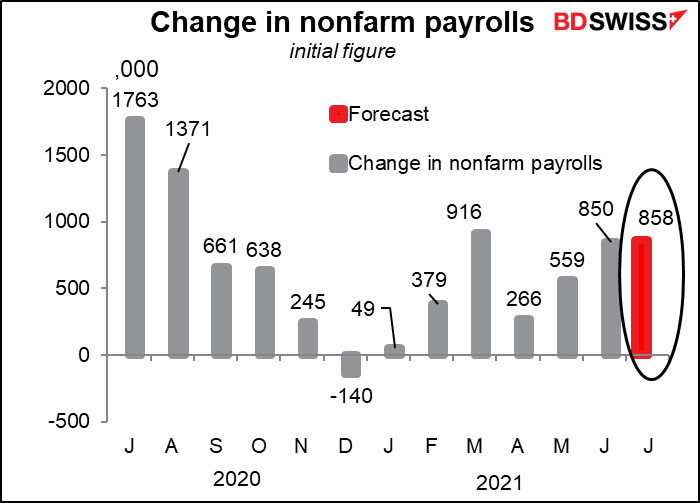 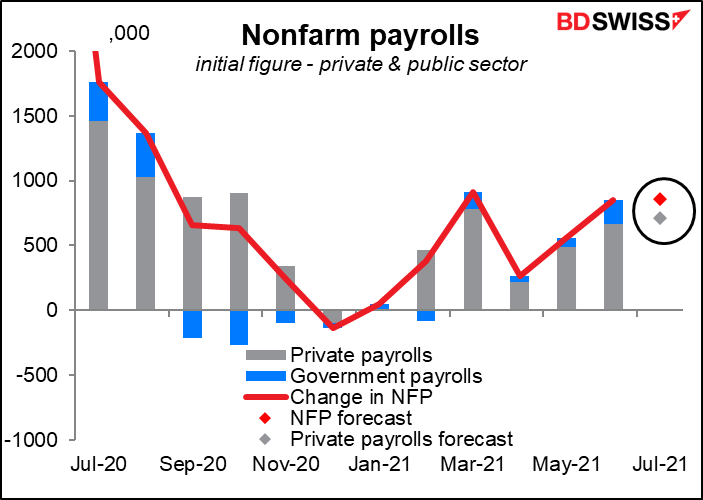 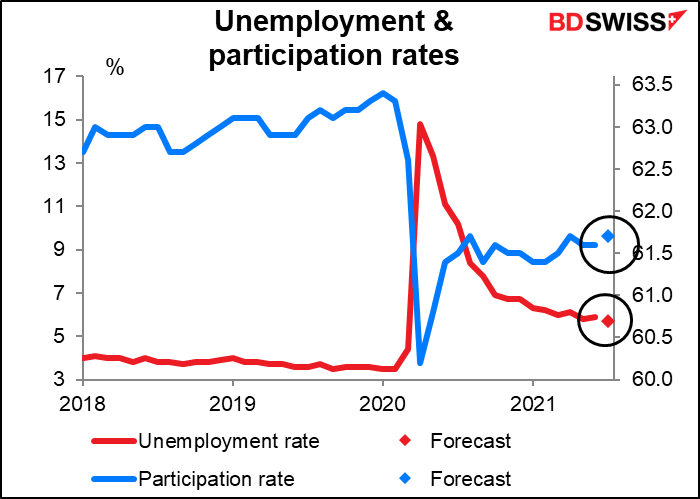 It’s hard to say what the market reaction would be to a figure like this. It’s certainly “progress” but it’s not showing any acceleration in the rate of progress. Therefore I think it would leave the dollar pretty much unchanged, except that the fall in the unemployment rate and rise in the participation rate is favorable.

I think the key then will be what happens with earnings. Market enthusiasm for the dollar may be dampened somewhat by the hourly earnings figure. Earnings are expected to grow at the same 0.3% mom pace as in June. Although that would result in a faster yoy rate of growth, I think it would be seen as slightly negative for the dollar. One of the easiest ways to determine whether the labor market is tight or not is whether wages are rising. If the rate of growth in wages isn’t accelerating on a mom basis, then the labor market probably isn’t tight yet and the doves on the Fed can argue against tapering. 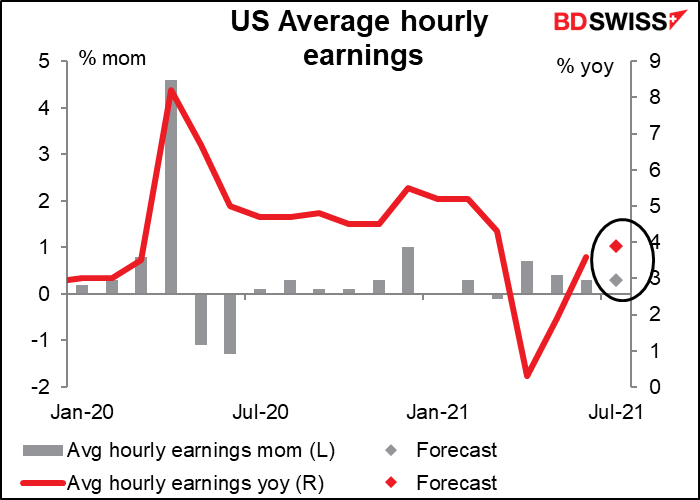 Market response: There seems to be more of a response when the figure beats estimates than when it misses. The last six times it’s beat the market forecasts, EUR/USD has on average declined (USD has strengthened) for a few days afterward. (The average would show this even more clearly without the outlier of last March.) 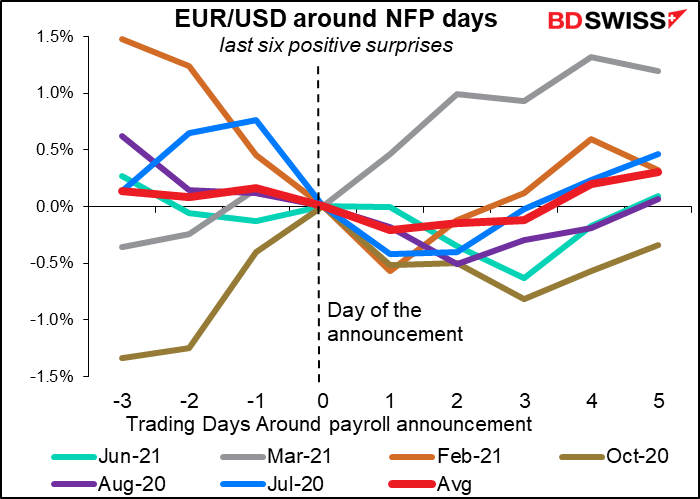 On the other hand, the last six negative surprises showed no clear trend, with EUR/USD rising half the time and falling the other half. 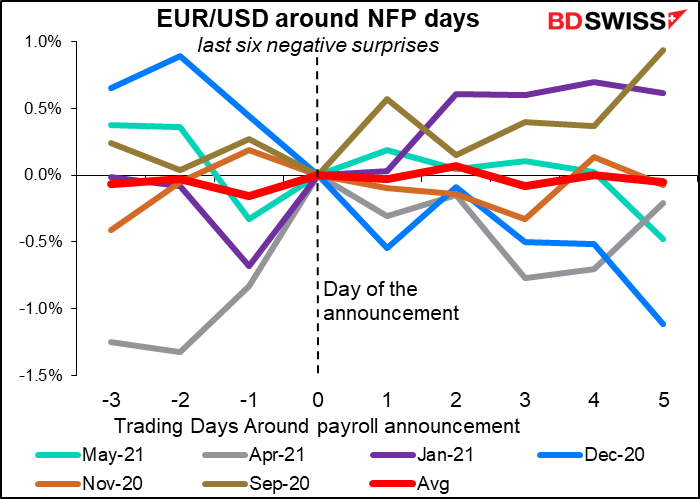 As usual, Canada’s employment data comes out at the same time. The number of jobs is expected to grow again… 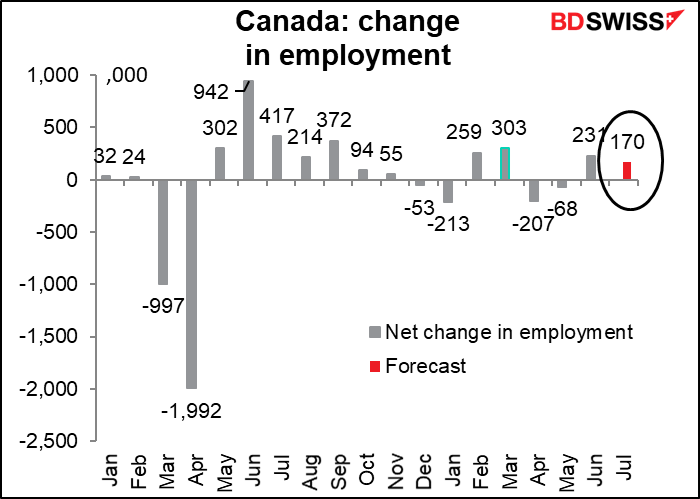 …while the unemployment rate is forecast to decline markedly to 7.4% from 7.8%. These are likely to be seen as good numbers that could boost CAD. 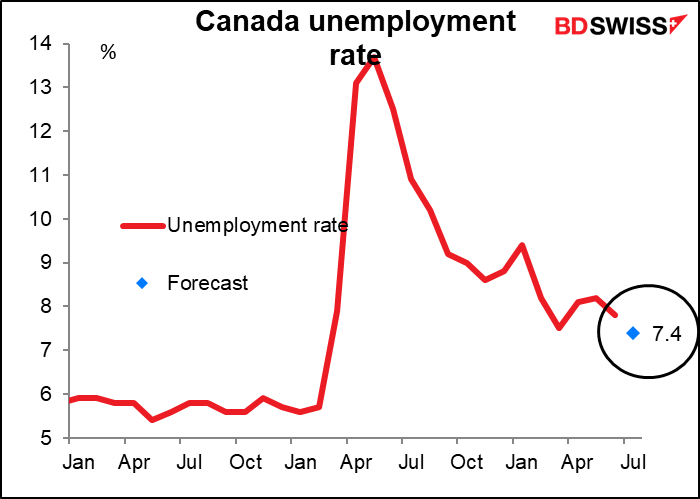 Then over the weekend we have two important indicators from China. They could influence the mood of the market when business starts up again on Monday.

China’s trade surplus is expected to be little changed from the previous month. Exports are not growing as quickly as imports as the reopening of the global economy proceed in fits and starts. Especially the virus is becoming an increasing problem for developing countries, which take 35% of China’s exports. 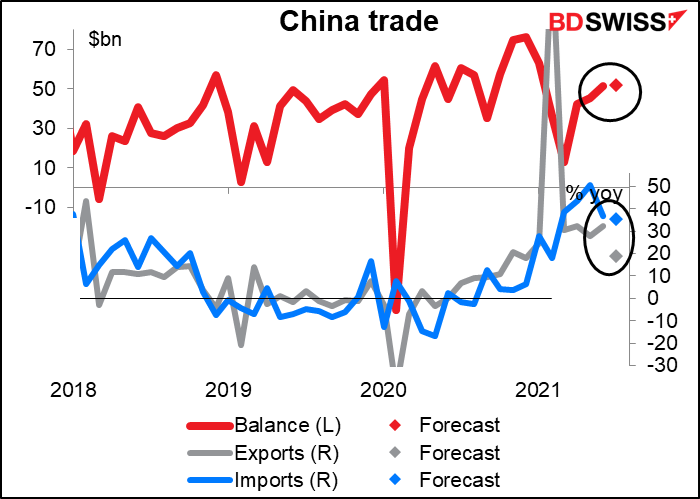 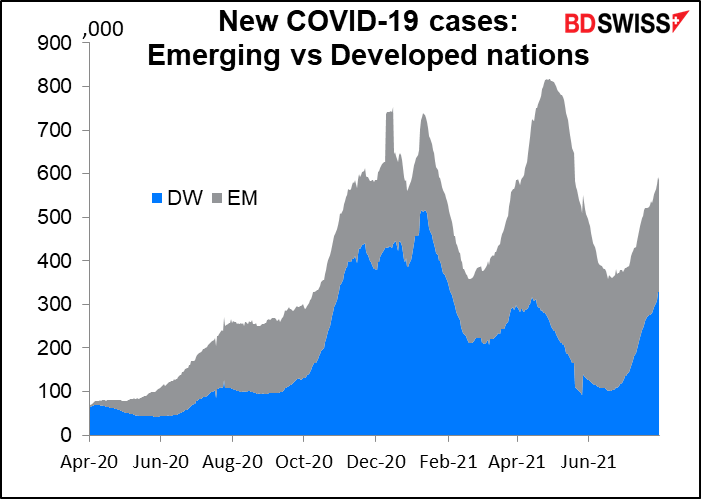 China’s inflation is expected to slow somewhat, both at the retail and wholesale levels. That’s good news globally because China often sets the minimum global price through its exports. China’s PPI is other countries’ import price index. 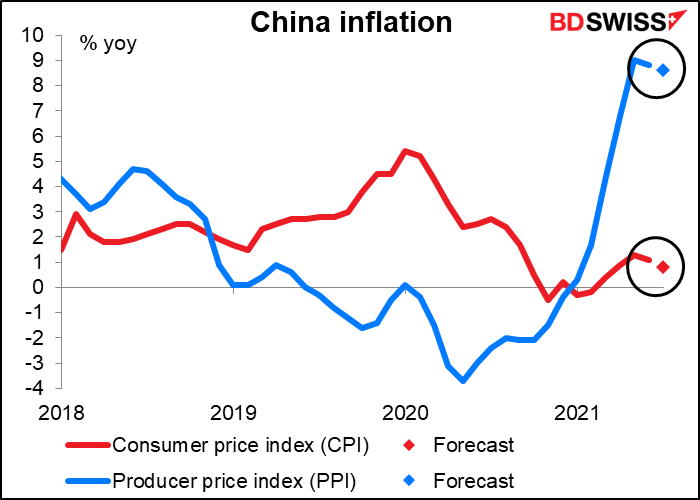 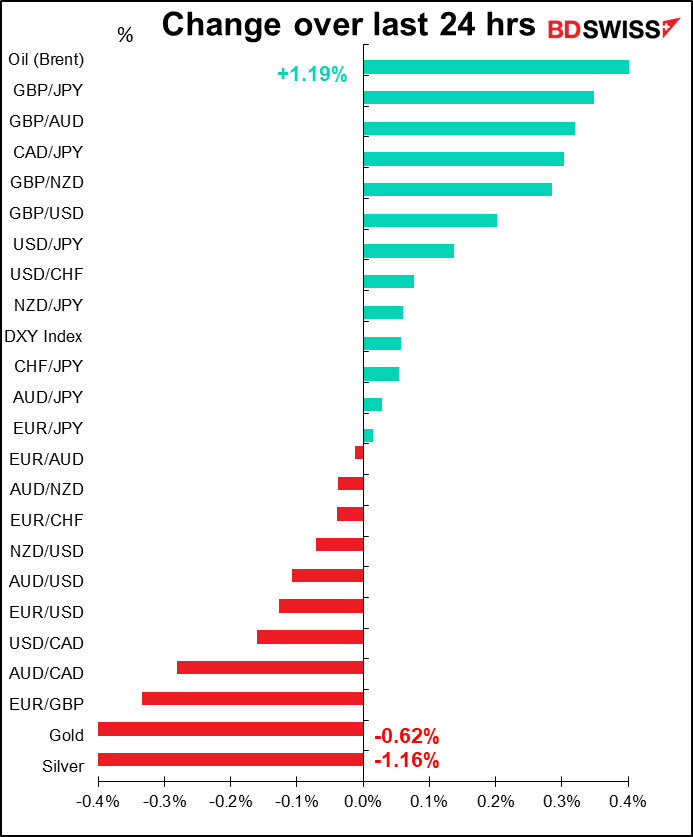