You are at:Home»MARKET PREVIEW»GBP Up, USD Down, EUR Little Changed after Central Bank meetings; Ifo index 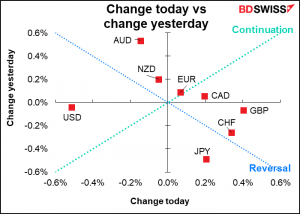 Boy what a day! Somehow the financial world managed to get through all those central bank meetings and data.

The big surprise was the interest rate hike by the Bank of England.

The Monetary Policy Committee (MPC) members really need to take a course in communicating with the press. They guided the market into expecting a rate hike in November but didn’t deliver. This time around it was Michael Saunders, who said on Dec. 3rd that “… given the new Omicron COVID variant has only been detected quite recently, there could be particular advantages in waiting to see more evidence on its possible effects on public health outcomes and hence on the economy.” Yet he voted for a rate hike this time along with all the other members of the MPC except for Ms. Tenreyro. The MPC argued that their mandate is inflation and they have to take a medium-term view rather than react to the immediate problem. With inflation now expected to peak “around 6% in April 2022,” up from the previously expected peak of 5% (it’s already 5.1% now), they had to act.

The market still expects 25 bps hikes at the March, June, and August meetings, and maybe one at the November one. That may support GBP for now, although I think the risk is that given the political and economic problems the country faces thanks to Brexit, they may not be able to hike as expected. 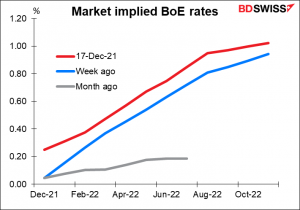 Or will they? BoE Gov. Bailey said afterward in a BBC interview that “We’ve seen evidence of a very tight labor market and we’re seeing more persistent inflation pressures, and that’s what we have to act on.” It could be that Brexit pushed up the underlying rate of inflation by removing so many people from the workforce, thereby pushing up wages. Although this is a problem faced by many countries, not just Britain.

The European Central Bank (ECB) meeting also had some surprises. The Governing Council said they would be ending net asset purchases under their Pandemic Emergency Purchase Programme (PEPP) at the end of March 2022. However they said purchases in Q1 would be “at a lower pace than in the previous quarter.” I had expected them to increase PEPP purchases as a compromise to offset the decision to end them since the Omicron variant is causing hardship anew for many countries. Instead they stepped up purchases by the Asset Purchase Programme (APP) to EUR 40bn a month in Q2 2022 from the current pace of EUR 20bn. Then they will taper down purchases to EUR 30bn in Q3 and back to EUR 20bn a month from October “for as long as necessary to reinforce the accommodative impact of its policy rates.” They also said that they expected net purchases would conclude “shortly before it starts raising the key ECB interest rates.”

There are other more small tweaks but it’s TMI.

Net net this was a somewhat hawkish decision. Although the increase in APP purchases will offset the decrease in PEPP purchases, the APP isn’t as flexible as the PEPP is — they have to allocate their purchases more rigidly among the countries & bond markets and thus can’t respond to the needs of individual countries as well. On the other hand, they made it clear that they’re not raising rates during 2022. That’s in line with their new forecasts, which as expected assume that inflation will not be sustainable at or above 2% for the forecast horizon (although clearly not as “transitory’ as before – they expect inflation to be substantially higher next year than this year!) 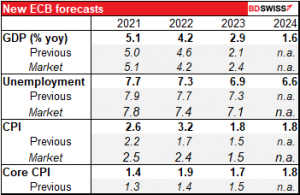 The Swiss National Bank (SNB) just repeated their usual statement about the CHF being “highly valued” and being willing to intervene in the FX market as necessary. Since they’ve clearly pulled back from intervening while the franc gets more and more highly valued, this didn’t clarify anything for anyone.

As for the Bank of Japan, no surprises there. No change in policy. As for their version of the PEPP, they’re letting it expire on schedule at the end of March for large firms that can access the bond market themselves but keeping in place the loan support for small- and medium-sized firms until September 2022. This is exactly as expected.

Meanwhile, the preliminary purchasing managers’ indices (PMIs) showed slowing growth momentum everywhere, with both manufacturing and service-sector PMIs falling in most of the countries surveyed. While Germany’s manufacturing PMI rose instead of falling as expected, its service-sector PMI was down much more than expected and indeed slipped into contractionary territory, which contributed to the larger-than-expected fall in the Eurozone composite PMI. The UK data was also notably weak, especially in services, and with more lockdown coming, we can expect it to be even weaker next month.

Why would US inflation expectations rise after the Fed was more hawkish than expected? Perhaps people don’t believe the Fed. Unusually, the fed funds futures are discounting less tightening than the Fed’s own “dot plot” implies. Usually it’s the other way around. Maybe the market doesn’t think the US economy can take such rate hikes, or that the Fed will have the political independence to impose them. 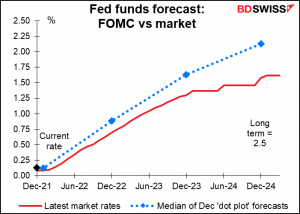 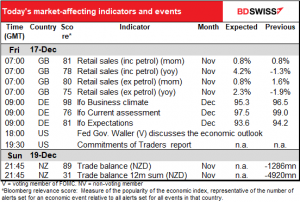 After the super-busy day we had yesterday, it’s real quiet today.
The UK retail sales are out already. They were better than expected across the board.

That leaves only the Ifo business sentiment survey on the schedule. It’s expected to show a deterioration in sentiment. That could go either way. Yesterday’s German manufacturing purchasing managers’ index (PMI) was supposed to be lower but instead rose slightly. On the other hand, the German service-sector PMI plunged. Together this resulted in a larger-than-expected decline in the composite PMI. I don’t know if the Ifo index is weighted more toward the manufacturing or service sector. 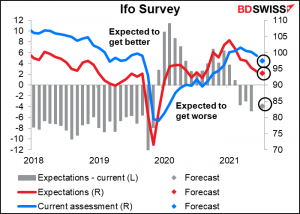 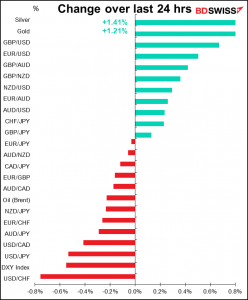