You are at:Home»MARKET PREVIEW»GBP up on Mixed Bank of England Message; US PCE, Brexit Day 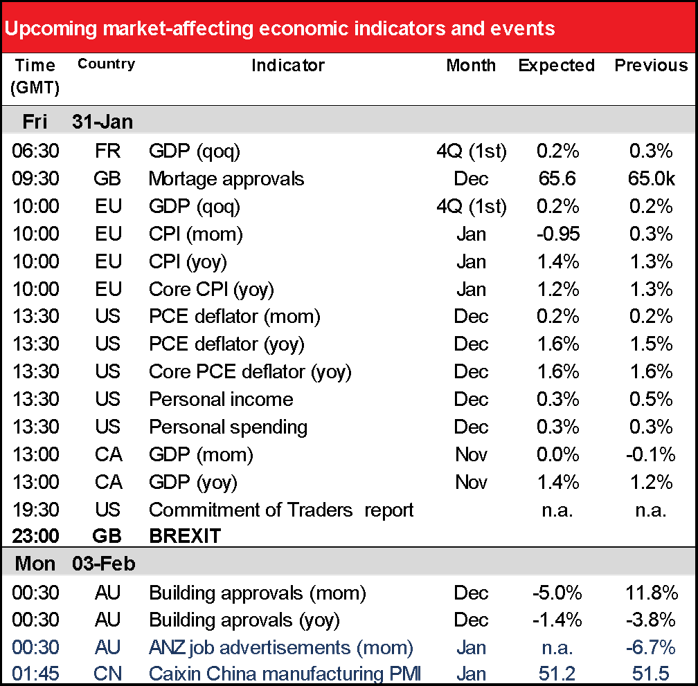 GBP was the stand-out currency after the Bank of England’s Monetary Policy Committee (MPC) came out with an oddly mixed conclusion. Their statement was fairly dovish:  they lowered their growth forecast, particuarly their prediction for excess demand, while they expect inflation to remain close to their target for the next three years. Moreover they dropped their reference to “limited and gradual” rate hikes and changed it to a “modest” tightening, which is less severe. Nonetheless the 7-2 vote to keep rates unchanged was a surprise as most commentators (including me) had expected at least one, maybe two more votes for a cut. As a result, the odds of a rate cut in the near term diminished, simply because it appears there aren’t the votes for it even if the MPC’s tone is more dovish.

It was extremely noticeable that cable went shooting up about a minute before the announcement came out – naughty naughty! 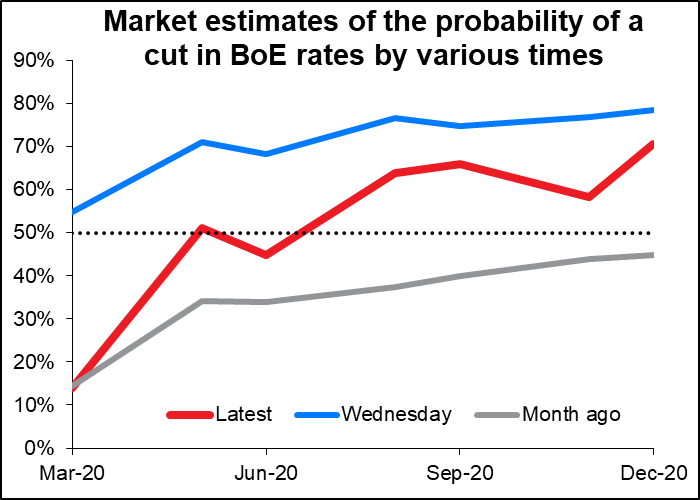 Outside of that, the market once again focused on the coronavirus. The World Health Organization (WHO) declared it a Public Health Emergency of International Concern, but did not call for blanket travel or trade restrictions. The declaration will enable WHO to give aid to other countries. Oddly enough, the declaration caused a “risk on” reaction in markets, with US stocks and Treasury yields closing higher, perhaps because the delaration could’ve been worse – they could have called for a ban on travel to China, for example.

Personally, I think the market relief is too early. The following graph by Bianco Research shows the likely progression of the infection based on data to 29 January. It predicts something like 88,000 people will be infected by Monday. (Note that the graph is in log scale.) This is really something we’ve never seen before. I expect AUD/JPY, oil and stocks to go much, much lower and gold & silver to go much, much higher before this whole thing is under control. 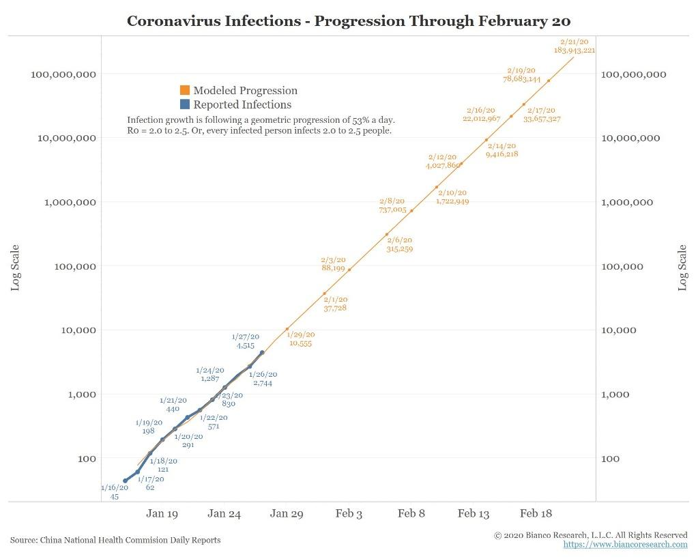 A few words about Brexit Day

(note: this is an abbreviated version of what I wrote in my weekly comment):

There are a few special days in my career that stand out because of the historical events I was privileged to live through and comment on – memorialize, perhaps – to my colleagues. The two that stand out most:  I remember the morning meeting I gave on 10 November 1989, the day after the Berlin Wall fell. Luckily in those pre-internet days I had a copy of Trotsky’s The Russian Revolution and so could get the quote right:  You are bankrupt, your role in history is played out. Go out where you belong – onto the dustheap of history. I remember the day Barack Obama was elected; choking back emotion, I quoted to my colleagues the words of Martin Luther King:  “I have a dream that my four little children will one day live in a nation where they will not be judged by the color of their skin but by the content of their character.” I thought Obama’s election signaled that that day had arrived in the US. How wrong I was.

But what am I to say to my colleagues today, Brexit Day? A day nearly as heavy with historical import, but for me, totally bereft of the hope and vision of a new, better future that these other landmark dates were imbued with. On the contrary, this seems to me to be a country rejecting the future and turning to a mythical past, and in the process committing economic and political suicide:  the impoverishment of the people leading, most likely, to the dissolution of the centuries-old alliance among the several nations of the United Kingdom. This time the map is being redrawn out of fear, not out of hope.

What can I say this time except to quote the Welsh poet Dylan Thomas:  “Rage, rage against the dying of the light”?

Even the British government admits it’s going to be bad, bad, bad. You can see a PowerPoint presentation giving their estimates for the impact of Brexit. Or you can read a more detailed analysis here.

I must admit, I didn’t read all 83 pages of this report. Nonetheless, in my brief examination I did not find one single instance where the Government predicted that the UK economy would be better off by leaving the EU. Even granting that economics isn’t everything, especially in politics – pride and independence are important – but will Britain really be prouder to be poorer and smaller? Smaller because the incentive for Scotland and Northern Ireland to break away from the United Kingdom and remain within the EU.

This is why I am structurally bearish on GBP until further notice. There will of course be occasionally uptrends within the overall downtrend. Nothing moves in a straight line. But as growth weakens, the Bank of England is likely to have to cut interest rates to support the economy even as the country’s primary balance moves more into deficit (larger current account deficit, less money coming in on the financial account). I suspect that by the time the UK and EU have to settle on their long-term arrangements at the end of this year, we will finally be able to hold that “Parity Party” that I first wrote about in 1984. If not GBP/USD parity, then at least EUR/GBP parity.

The day starts out with UK mortgage approvals from the Bank of England. Given what else is going on in Britain today, I’d quote Shakespeare this time (end of King Lear), that’s but a trifle here.

EU-wide Q4 GDP is forecast to grow at a slightly slower pace than in Q3, on both a qoq and yoy rate. While this isn’t good news, I don’t think it will come as a surprise, nor is it likely to disturb the market that much. 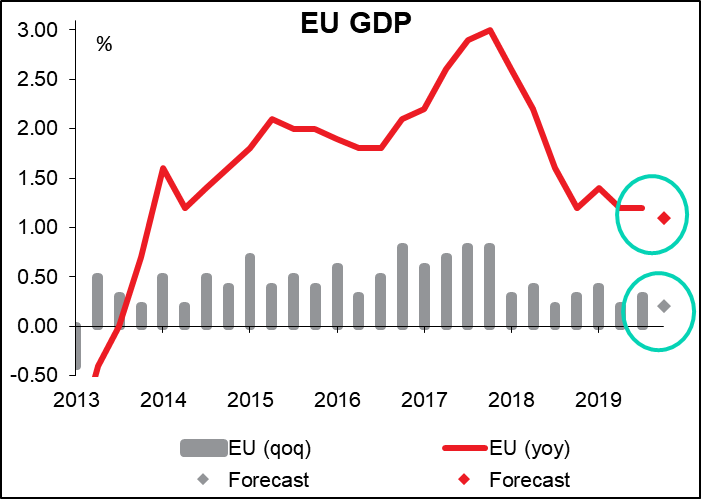 The prevailing view in the market is that Q4 was the trough and things are likely to get better from there. The market consensus is currently that growth bottoms out at 0.2% in Q4 2019 and Q1 2020 and then picks up from there. Accordingly, I think this is likely to be EUR neutral so long as it doesn’t slip below the consensus forecast. 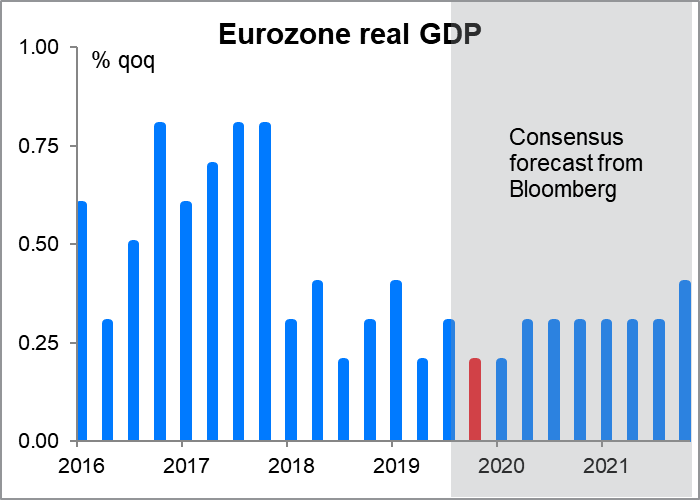 EU January consumer price inflation is expected to accelerate a bit at the headline level, but core inflation is expected to slow a bit. This compares with yesterday’s German inflation figures, which showed a slight acceleration in inflation to +1.6% yoy from +1.5% (although this was below the market estimate of +1.7%). Wait a minute…the ECB last week said that “While inflation developments remain subdued overall, there are some signs of a moderate increase in underlying inflation in line with expectations.” It’s kind of embarrassing that the next week, underlying inflation actually slows, no? Maybe not. Maybe they’re beyond being embarrassed by this kind of thing. Nonetheless it will make it harder for them to pretend that inflation is going back to their target level any time soon. EUR negative 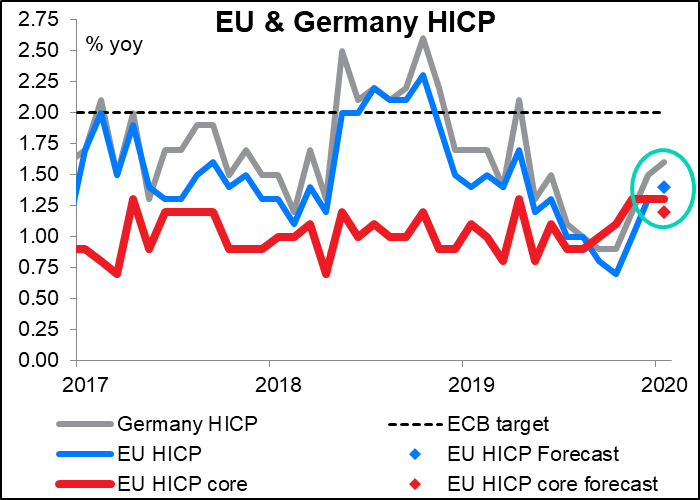 It’s also troubling that EU inflation expectations are firmly anchored well below the ECB’s “close to but below 2%” target. How the ECB can overcome this problem is probably one of the main topics of discussion for their strategy review. 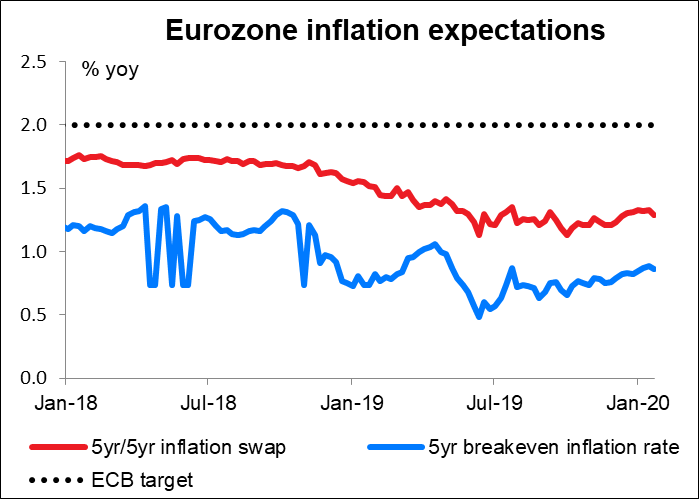 Now we get what I think should be the key statistic for the month, although people keep fixating on the nonfarm payrolls instead. This is the personal consumption expenditure (PCE) deflator, the Fed’s preferred inflation gauge. With unempoyment well beyond what the Fed considers to be full employment, it would take an earthquake (or a coronavirus?) to affect the Committee’s thinking about that side of their dual mandate.On the other hand, inflation – as measured by their preferred gauge, the core PCE deflator — continues to fall short of their 2% target, and is trending lower. So why does everyone pay so much attention to the indicator that’s deep into “mission accomplished” territory and pay much, much less attention to the one that’s still not hitting the target? This is the one that the Fed is worried about, not employment, and therefore this is the one that we can assume is going to be the driving force for policy.

My guess? Inflation is not as variable as payrolls, especially the core PCE deflator, which is pretty stable and can be forecast fairly reliably. It therefore doesn’t provide the same kind of shocks to the market as the NFP does. Moreover, traditionally the labor market has been a leading indicator of inflation, although that relationship has fallen apart over the last few years.

But the PCE deflators are probably more important at this point than the NFP. If the Fed does cut rates sometime, it’s going to be because inflation is falling short of their target, not because unemployment is. And at the moment, it is. Core PCE is trending downwards. This month it’s forecast to be steady (in terms of the yoy growth rate), but still it’s pretty amazing that inflation is so low with unemployment at a 50-year low. USD negative 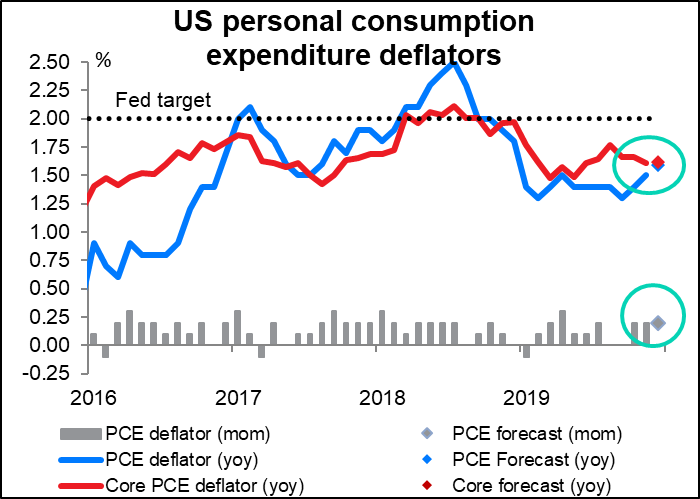 The PCE deflators are  released as part of the US personal income & personal savings series. These are important indicators for some stocks but not for the FX market, in general. Both are expected to slow somewhat from the previous month down to about the trend rate. That’s worrisome as weak income growth is related to weak spending growth, which of course is connected to the recent weak retail sales figures. USD negative 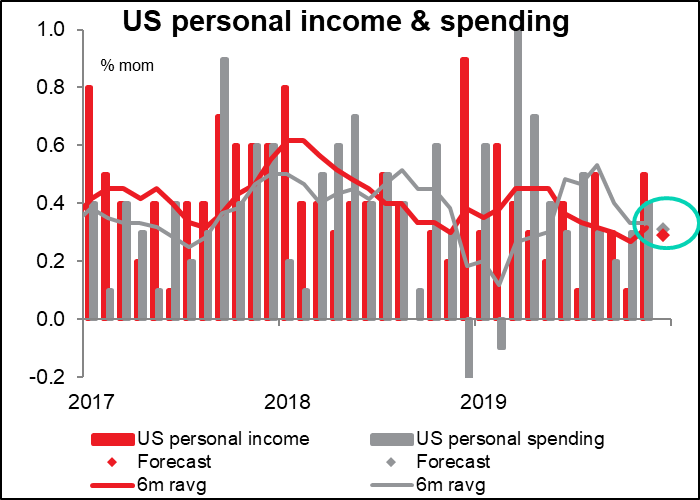 Canada’s November GDP is expected to show no growth from the previous month. I guess that’s better than contracting, like it did in October, but it’s not great. It’s going to be tough to meet the Bank of Canada’s prediction that output would be up 0.3% in Q4 as a whole. The question is, why the slow growth? The Bank  isn’t sure. “Some of the slowdown in growth in late 2019 was related to special factors that include strikes, poor weather, and inventory adjustments,” the statement after the last BoC meeting read. “The weaker data could also signal that global economic conditions have been affecting Canada’s economy to a greater extent than was predicted.” Their reaction depends on whether they believe it’s due to “special factors” that will pass or to “global economic conditions,” which are not improving now thanks to the coronavirus. CAD negative 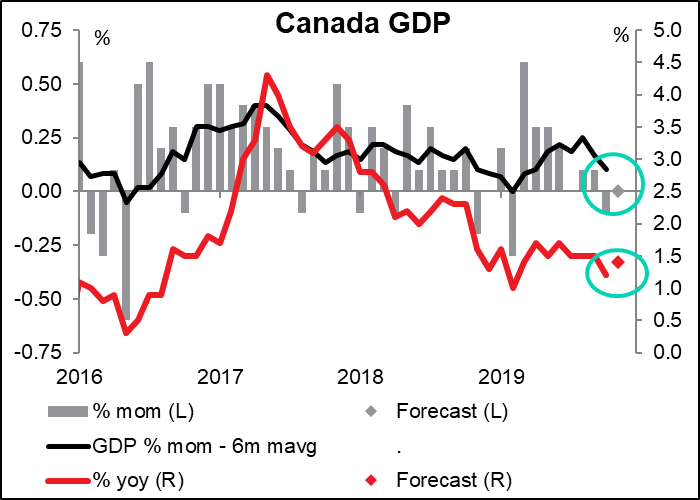 Then Monday, before the Western world wakes up, the Caixin China manufacturing purchasing managers’ index is expected to be down slightly, as was the official manufacturing PMI, which came out this morning. I don’t think this will be watched much however as the situation in China is vastly different now as the country is gripped by coronavirus fears. 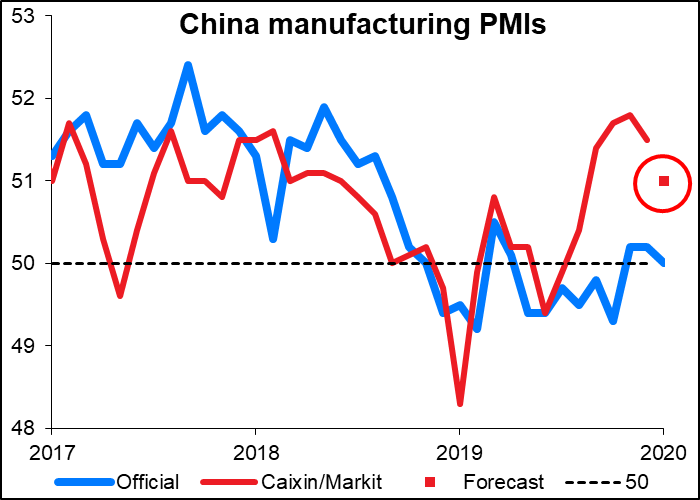