Another day, another leg lower for GBP. Selling sterling seems to be the market’s main occupation nowadays.

Once again the selling of sterling may have been connected to buying of euros, which gained for the fourth day to recover the 1.19 level, last seen in the morning when I open my spreadsheet on March 23rd. It looks like perhaps people are getting more optimistic about the rollout of a vaccine in the EU and less optimistic about the comparable move in the UK. EUR didn’t react much to the release of the minutes of the March 11th European Central Bank meeting, which revealed that the Governing Council agree that the recent tightening of financial conditions in the euro area was premature.

Also another day, another record high for the stock markets, with the S&P 500, STOXX 600 and MSCI World Index all moving further into record territory. At the same time, markets are apparently getting more reassured as the VIX index of expected stock market volatility fell below 17 for the first time since the pandemic began last year. 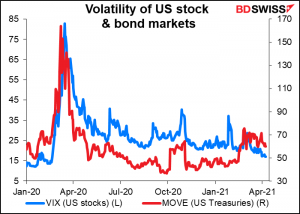 Bond market volatility however remains high as the skittish market assesses how the Fed may react to the recent good US economic data in light of its new “average inflation targeting” monetary policy framework. Fed Chair Powell yesterday mostly just repeated his usual dovish message, but that was enough to reassure investors who have responded to the recent strong economic data, such as Friday’s stunning US nonfarm payrolls, by moving forward their expectations of when the Fed might start tightening policy. You can see how expectations have fallen just this week: 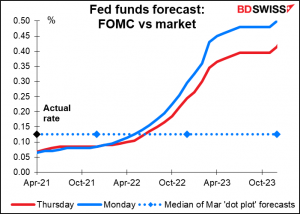 Notably, the focus of Powell’s comments was not on inflation but rather on the labor market. He stressed the damage to the economy and the labor market compared to how it was before the pandemic and in particular the impact on lower-paid workers, noting that the “burden is still falling on lower income workers, the unemployment rate in the bottom quartile is still 20 per cent.” While he welcomed the larger-than-expected 916k rise in payrolls in March, he said “we want to see a string of ones like that so we can really begin to show progress toward our goals.” (Remember that “substantial progress” is their buzzword for what would get them to move.) This will only reinforce attention to the monthly NFP figure, which is already the object of almost cult-like attention.

I think it’s also significant that he stressed the unemployment situation for lower-paid workers. Equality is now a big issue for the Fed. For example, earlier this month Atlanta Fed’s Bostic (V) took part in a National Bureau of Economic Research (NBER) panel discussion on inequality and discrimination and the financial system, while next Tuesday there’s the fifth event in the Minneapolis Fed’s series of discussions on Racism and the Economy. 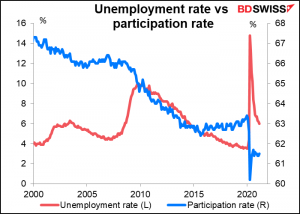 Speaking of unemployment, yesterday’s US initial jobless claims were a big disappointment, rising 25k instead of falling 39k as expected. But note that there’s a lot of week-to-week variation in the data, as indicated by the wide one-standard-deviation band. What’s worrisome to me is that the four-week moving average, which is what we used to watch before these figures became a market totem, seems to have bottomed out. Hmmm… 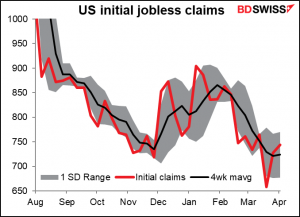 Meanwhile, some puzzling moves in the FX market. If we had such a “risk-on” market, why were CHF and JPY the biggest gainers? It may just be position-adjusting, like what’s going on with GBP. As of Monday, GBP had been the best-performing currency of the year while JPY and CHF had been the worst-performing, so perhaps people are just selling the winner and buying the losers. 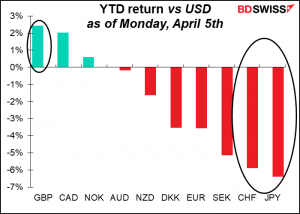 CAD, the year’s #2 so far, seems to have avoided that trend however. CAD was up as oil gained on an interview with the Saudi oil minister, who said he was still confident that OPEC+ had made the right decision to increase production slightly. Optimism about today’s Canadian employment data (see below) may also have played a part. 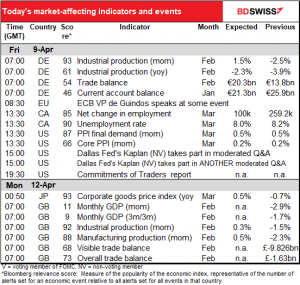 So the next thing we have is the Canadian employment data. Usually it comes out at the same time as the US payrolls, but not this month. 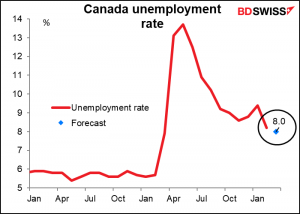 The number of jobs is expected to increase, but not by that much as significant restrictions were still in place. Still, that’s better than the drop in employment that happened a few months ago. 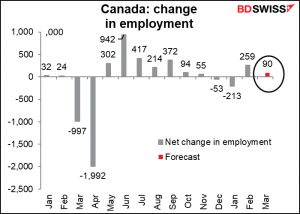 The US producer price index (PPI) has a high Bloomberg relevance score but I’m not sure it has much impact on the FX market. Nonetheless I’d pay attention to it this month as the possibility of higher inflation is a big topic in the market. It looks like producer prices are going through the roof. Overnight we saw China’s PPI leap from +1.7% yoy to +4.4% yoy, well above estimates of +3.6% yoy. 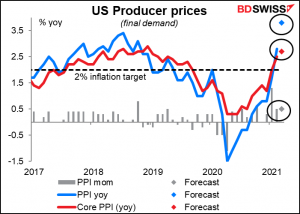 The forecast for the headline figure, +3.8% yoy, would be the fastest rate of increase since 2011. Of course what happened back then is instructive – it didn’t set off a wave of retail price inflation, but rather the rate of change gradually came down until by 2015 producer prices were falling on a yoy basis. 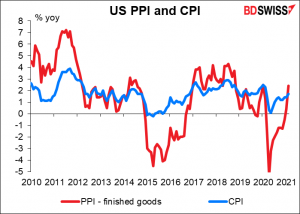 Also, as you can see, core producer prices (excluding petroleum products) tend to be less volatile. 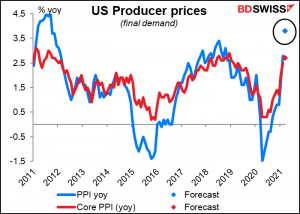 Speaking of producer prices, early Monday we get Japan’s corporate goods price index. In Japan, home of deflation, this is still expected to be falling on a yoy basis, although the rate of decline is forecast to narrow somewhat. 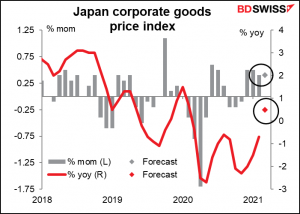 Then also early early Monday in Europe, it’s short-term indicator day in Britain, when they release the monthly GDP, industrial & manufacturing production, and the trade data. At this point we only have forecasts for the industrial & manufacturing production, which are both expected to be up 0.3% mom. I can’t say how this is likely to affect the pound because a) the GDP number is probably more important, and b) the pound seems to be moving recently according to market positioning and sentiment rather than economic fundamentals anyway.