Only small changes in FX rates Friday & this morning.

GBP continued what seems like its inexorable decline, the fifth day out of six that it’s been lower when I opened my spreadsheet in the morning. Nothing new here that I can discern – just people trimming their long positions, which haven’t made any money since they peaked. 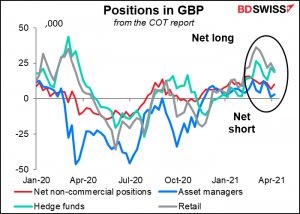 The UK will lift some of its restrictions today. That’s likely to give the economy a boost as households spend some of the money they’ve accumulated while cloistered in their homes. UK retail sales have lagged behind other countries, indicating that there’s probably a lot of pent-up demand for goods (and pints) waiting to explode once people are allowed to. Nonetheless it will take some time before any additional spending shows up in the statistics. 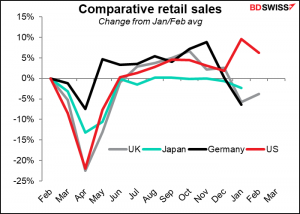 In the FX market there’s no discernable “risk-on” mood, nor “risk-off” for that matter – AUD was the #2 loser and JPY the #3 – normally these two would be going in opposite directions.

AUD declined but CAD was the best-performing currency despite a fall in oil prices. Friday’s Canadian employment data far exceeded expectations, with 3x as many new jobs created as expected (303.1k vs 100.0k expected) and the unemployment rate plunging to 7.5% from 8.2% (8.0% expected). February’s employment number was also a big surprise – it was forecast to be +75k, it turned out to be +259.2k. 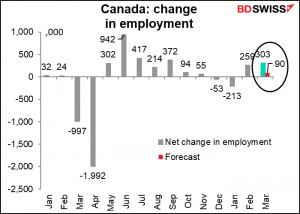 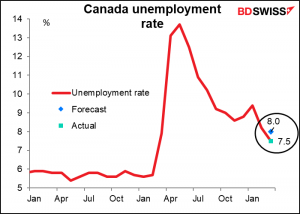 The report showed that while restrictions have been imposed in a number of places in Canada recently, the Canadian economy was rebounding and adding jobs at a rapid pace before that. It suggests that once the current restrictions are lifted, Canada is likely to rebound again.

Canada’s economic indicators have been consistently surprising on the upside this year and the degree of surprise has been increasing recently, in contrast to the other commodity currencies, which have been beating expectations less and less. This is yet another reason why I’m most bullish CAD of the three commodity currencies. 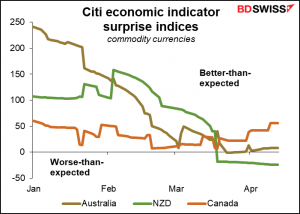 Same old same old…specs cut their short USD (long currency) positions for the fifth week in a row. This week they cut all their long currency positions (EUR, GBP, AUD, CHF, NZD, and CAD). However it’s hard to say that they’re getting bullish USD as they also reduced both of their net short currency (long USD) positions (JPY & MXN) and cut their long DXY position (although that’s quite small). So maybe it’s just a reduction in risk or a reduction in confidence in the trend. 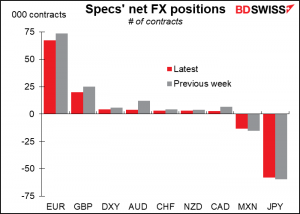 Hedge funds also reduced some of their long currency positions (AUD, GBP, CHF). And trimmed their short JPY positions. But they increased their short EUR and long MXN. 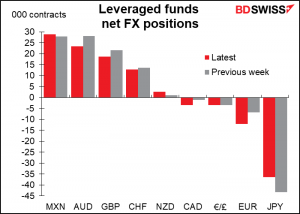 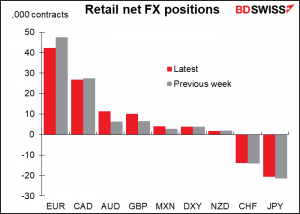 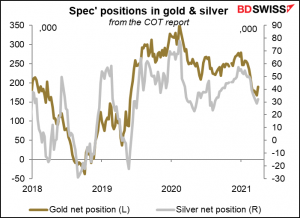 There are no extreme positions evident. 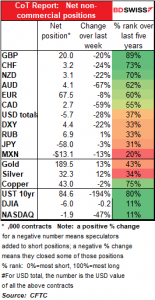 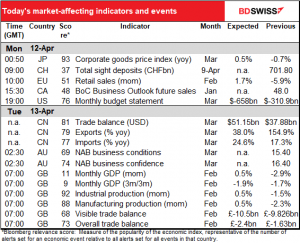 It appears that the Swiss National Bank (SNB) has mostly held off intervening this year. Swiss sight deposits have fallen seven out of the 12 weeks so far, for a total decline of CHF 938mn. Let’s see if they still stayed out of the market as EUR/CHF started to go in the other (= wrong) direction. 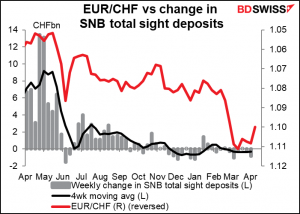 Eurozone retail sales are not going that great. The forecast is for a significant rise of 1.7% mom, but this increase – which normally would be quite substantial — is rather disappointing as it comes after a big decline. 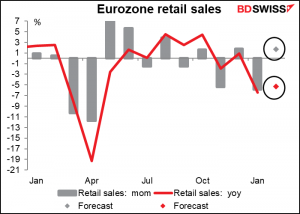 It would leave EU retail sales some 4.9% below pre-pandemic levels – back to where they were in 2017. 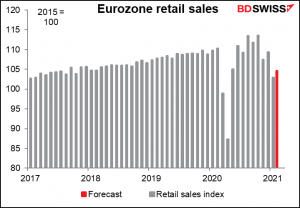 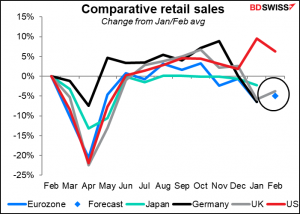 The US budget deficit is expected to blow up (or down, in graph terms) in March. 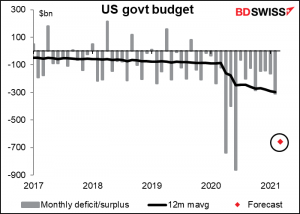 This puts the US on track to beat last year’s deficit. This is probably already discounted in the bond market however so I don’t think it will make many waves in the financial world. But it is fun to track. 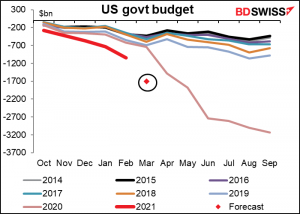 Overnight, China’s trade figures are expected to show a rise in the trade surplus as exports grow faster than imports. This is to some degree the counterpart of the widening US trade deficit, I would imagine. It’s also likely to prove beneficial for AUD. 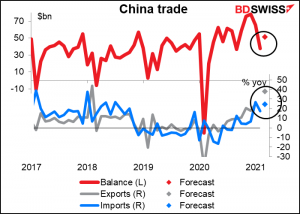 Speaking of AUD, the National Australia Bank (NAB) business sentiment indices sometimes move the market even though there are no forecasts. So I’m going to include a graph. Why? Because we like you! 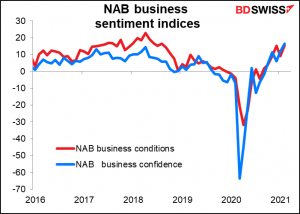 Finally, early Tuesday, before I could even dream of getting my daily comment out, Britain announces its short-term indicator day, including industrial & manufacturing production, trade balance, and the all-important monthly GDP figure.

UK GDP collapsed in January as a result of the lockdown, supply disruptions from Brexit and an end to stockpiling. February should show some increase as household spending increased and more people got back into work. Showing an increase in GDP from the previous month – even a modest one – could help to restore confidence in the beleaguered pound and spur some buying, in my view. 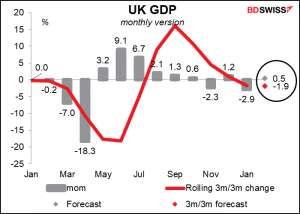 Industrial and manufacturing production are expected to be up slightly after the January disruptions caused by Brexit and destocking. 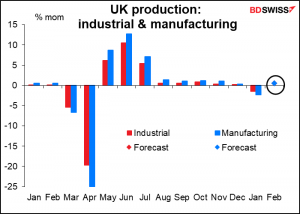 The trade deficit is expected to widen although to remain narrower than the trend. This is probably because UK firms stockpiled a lot of imported stuff ahead of Brexit and are now destocking. It’s hard to untangle the impact of Brexit though, as trade both ways – both imports from and exports to the continent – has become more difficult. 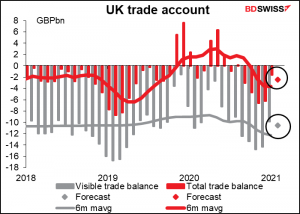 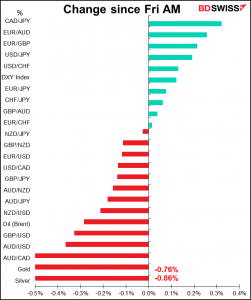