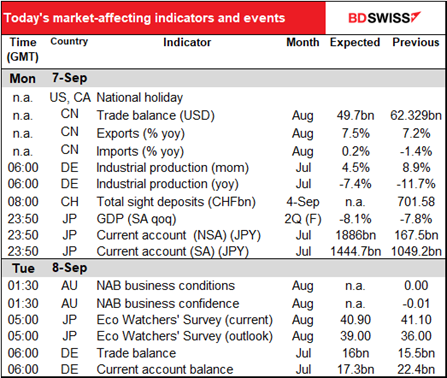 The S&P 500 opened slightly higher on Friday but couldn’t hold and by midmorning was down 3%. However it gradually recovered from those losses to end down only 0.8%. Nonetheless that’s still down 4.3% from Wednesday’s record high. This morning the mood in Asia is mixed, with most markets showing small losses but several showing equally small gains.

The mood in the FX market is better than that in the stock market, though. Currencies are reflecting a typical “risk-on” pattern. The safe-haven CHF is the biggest decliner while the three commodity currencies are topping the gainers. It’s particularly noticeable that CAD is the best performer even though Brent is down 3% this morning after Saudi Arabia cut its pricing for October.

AUD outperformed NZD, contrary to recent performance. Reserve Bank of New Zealand (RBNZ) Gov. Orr last week said he was working on a package of measures to head off low inflation or even deflation. Sunday the RBNZ put out a media release saying the package would include “negative wholesale interest rates and direct funding to banks.” Although inflation expectations have risen somewhat in NZ recently, they remain well below the 2% inflation target and also below Australia’s expected inflation.l 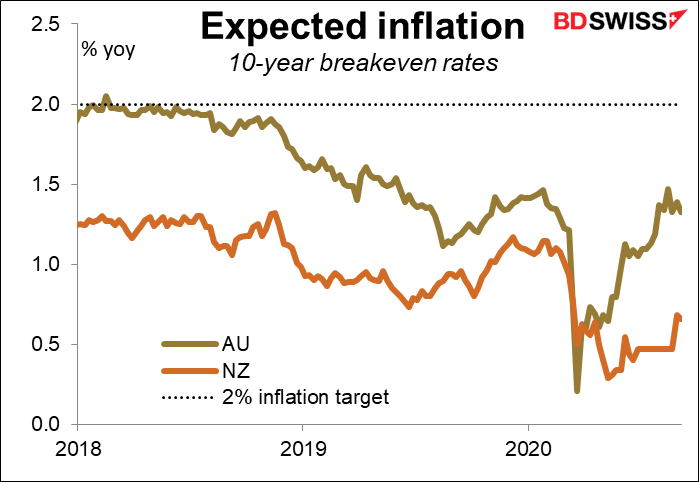 GBP is in focus this morning on concerns about an article in the Financial Times (FT), UK plan to undermine withdrawal treaty puts Brexit talks at risk The article says,

“The UK is planning new legislation that will override key parts of the Brexit withdrawal agreement, risking the collapse of trade negotiations with Brussels. Sections of the internal market bill — due to be published this Wednesday — are expected to “eliminate the legal force of parts of the withdrawal agreement” in areas including state aid and Northern Ireland customs, according to three people familiar with the plans. The move would “clearly and consciously” undermine the agreement on Northern Ireland that Boris Johnson signed last October to avoid a return to a hard border in the region, one person with knowledge of the plans said.

If Britain goes ahead and undermines this crucial part of the agreement, it will be saying to Brussels “our signature on an agreement doesn’t mean anything.”

The impact was heightened by an interview with UK Chief Negotiator David Frost in the Mail on Sunday, where he said, “We are not going to be a client state.” “We are not going to accept provisions that lock us into the way the EU do things,” he said, which of course is the chief goal of the EU – to ensure a “level playing field” between the two sides by making Britain play by the EU’s rules. Frost said the UK government was “fully ready” to trade with the EU without a formal deal.

The eighth round of Brexit negotiations begin in London tomorrow. Some of this talk may be just bolstering the UK’s bargaining position, but in my view it’s a silly approach. A “no deal” Brexit would hurt the UK much more than the EU.  Britain makes much of the fact that the EU has a big trade surplus in trade with the UK, which they say makes the UK more important for the EU than the EU is for Britain. However, the EU represents fully 49% of Britain’s merchandise trade (49% of both exports and imports), whereas the UK represents only 4.9% of the European Union’s merchandise trade, including 5.9% of exports and 3.9% of imports. Which will be hurt more: the side that suddenly has restrictions on 49% of its exports or the side that has restrictions on 5.9% of its exports? And that doesn’t include trade in services, which are even more important to Britain.

Friday I mentioned the extraordinary activity in out-of-the-money calls on the major tech stocks. Then in Friday’s FT it was revealed that Softbank was the “whale” behind the purchases of billions of dollars worth of these equity derivatives. Of course the question people want to know now is, will Softbank continue to buy? Sorry but I have no connections in the company so I don’t know.

Although Softbank is said to be buying in huge amounts, there has also been a lot of activity in short-dated options, options that have only a week or two to maturity. Retail speculators are the major participants in this highly volatile part of the market. Many of these people may be new traders who just started trading to make some extra money during lockdown. This was an important but expensive part of their education:  stocks go down as well as up.

Regardless of who was doing it, dealers’ hedging exacerbated the upward move when stocks were rising and on Thursday and Friday exacerbated the downward move. This is one reason why the VIX index of expected stock market volatility rose as the market rose – usually it falls when the market is rising. 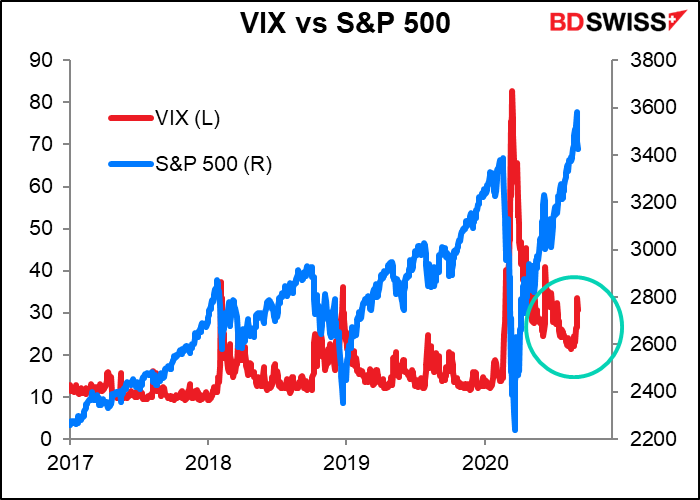 It’s going to be a relatively quiet day – the only major European indicator is already out, and the US and Canada will be out of the market for the Labor Day holiday.

The Swiss National Bank (SNB) keeps intervening steadily as EUR/CHF rallies. Should that be “even though” (EUR/CHFrallies) or should it be “therefore” (EUR/CHF rallies)?  It looks to me like the amount of intervention hasn’t increased but the rate of change in EUR/CHF has, so I’d say “even though.” EUR would probably be gaining on CHF anyway but they’re not taking any chances. 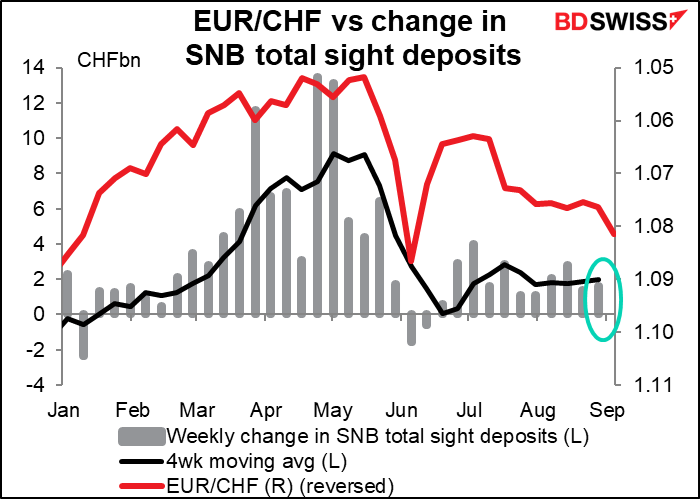 OK that’s it for today.

Tonight we get the final revision of Japan’s 2nd quarter GDP. Actually it’s not the final revision, the figures are revised again years later once all the tax payments are in, but it’s the last revision for now. I don’t think people will care much about it because 2Q GDP was record bad everywhere in the world, so whether it’s a little bit more bad or less bad than it was originally isn’t much of an issue. In any case, it’s likely to be revised down due to weaker-than-expected private capital investment.

Japan’s current account balance is forecast to rise somewhat as the merchandise trade balance flips from deficit to surplus. 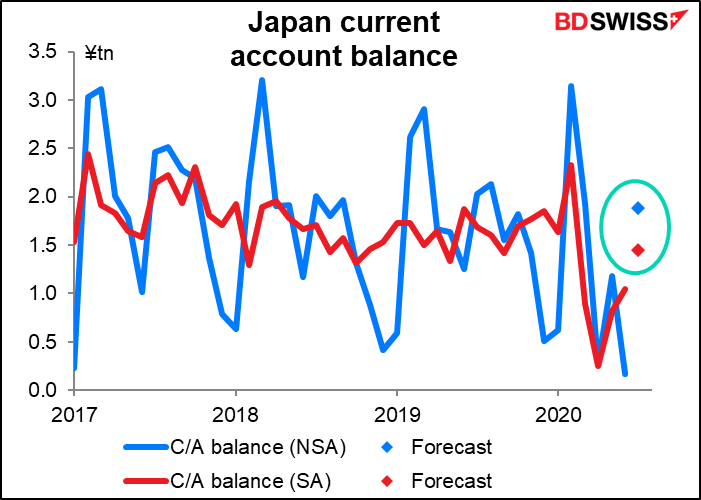 The campaign for the leadership of the ruling Liberal Democratic Party (LDP) – and therefore the Prime Minister of Japan – officially begins today. For those of you who aren’t familiar with Japanese politics, the LDP has basically ruled Japan since around 1955, with only one brief interval out of power that I can remember. But that doesn’t mean there’s no politics in Japan – just that the politics take place within the ruling partiy, which is divided into various factions.  As far as I can tell, these factions basically exist for no greater reason than to get their leader into power, at which point their leader will appoint his followers into various plum positions.

Nonetheless the leaders of the factions have to have some policy positions to differentiate themselves from each other, and so they will now be revealing their platforms. Chief Cabinet Secretary Yoshihide Suga has so far emphasized continuing Abenomics. Within that broad topic, he’s focusing on cutting mobile phone charges, a surprisingly small goal compared to the larger issues that Abe himself wanted to tackle. (Suga held a high position in the Ministry of Internal Affairs and Communication in 2005 and has been concerned with telecoms ever since.) LDP Policy Chief Fumio Kishida is stressing addressing social inequalities while former LDP Secretary General Shigeru Ishiba is emphasizing decentralization.

People will be waiting for the details of these positions. We will also want to hear what if anything the candidates have to say about monetary policy and the 2% inflation target.

Japan’s public broadcaster NHK has reported that five of the LDP Diet members’ seven factions have expressed support for Suga, who therefore starts off with a decided advantage. The LDP Presidential elections is 14 September, followed by an extraordinary Diet session on the 16th, which will elect the new PM – who is always the leader of the main party, in this case the LDP.

We already know a lot about what Suga thinks, because he held a press conference last week. His comments about monetary policy and the Bank of Japan were particularly interesting:

“My impression is that since the inauguration of the Abe administration, we have been working on economic policy as a top priority. Having looked at the situation in Japan before the change of administration, with the yen heading toward a level below ¥75 against the US dollar, and the Nikkei Stock Average at ¥8,000, we have been working on the economy as the foremost priority. As a result of Abenomics, even in the current very difficult economic situation the yen is trading at about ¥105, and the Nikkei around ¥23,000. In this context, we were also able to increase jobs. I would like to take over Abenomics with firm responsibility and take it even further”

“With regard to relations with the Bank of Japan, I want to proceed in the same way as Prime Minister Abe.”

“In the current circumstances, I will of course work on protecting jobs and sustaining private businesses. To do that, I think the government would like monetary policy to be advanced further if the situation indicates that is required. I think we’re truly at a crucial point.”

There’s no forecast for the National Australian Bank (NAB) business sentiment indices, but the market watches them nonetheless and they can be market-moving. 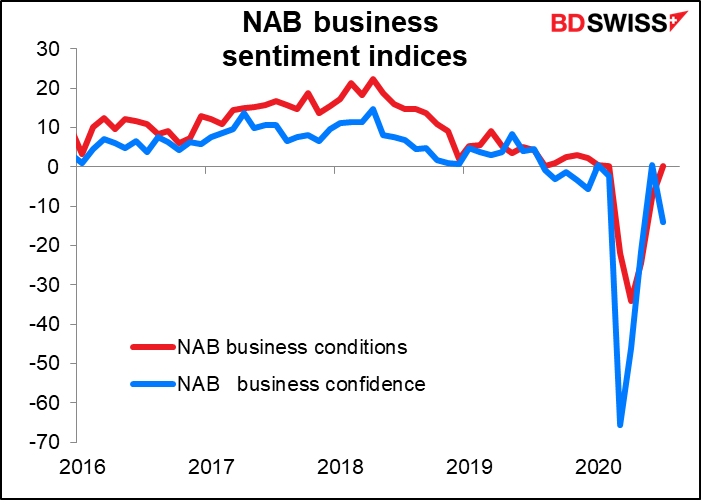 I have to admit, the Japan Eco Watchers’ Survey is one of the leasto-watched indicators I’ve ever seen. Its Bloomberg score is only 8.3 and 7.3, meaning only around 8% of the people who set alarms for Japanese indicators set alarms for this one. That could be me! Maybe I’m the only one! But I think it’s worth watching this indicator nowadays, because it seems to be a more sensitive version of the service-sector purchasing managers’ index or even the tertiary sector index, which is closely watched (Bloomberg score:  90.6). The Eco Watchers’ Survey seems to lead the Tertiary Sector Index by a month or so. I can’t understand why the market pays so much attention to the latter but not to the former. 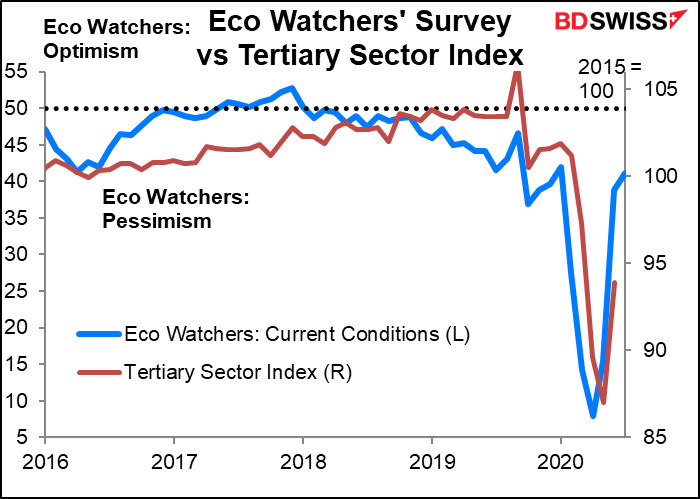 In any case, after all that explanation, the sad fact is that the current conditions index is expected to be pretty much unchanged, so probably no impact. The Outlook is forecast to be up a bit, but not enough to make much of a difference in anyone’s view of the future, I’d guess. 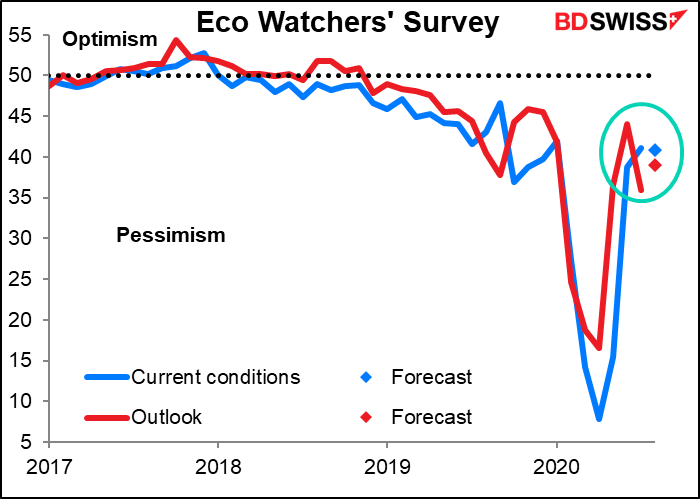 Finally, as the sun makes its daily appearance from over the Polish border, Germany announces its trade and current account figures. The trade surplus is expected to rise almost back to pre-pandmic levels (EUR 16.0bn vs average EUR 17.0bn for Jan & Feb). The current account surplus on the other hand is expected to fall noticeably. I say “noticeably” but probably no one will notice this indicator at all, as it gets a pretty low Bloomberg rating – only 54 (trade) and 46 (current account). Normally I wouldn’t bother with such a low-rated indicator, but trade is crucial for the German economy and besides, over the longer term the currency of a country (or currency bloc in this case) is affected by the current account as well as the financial account. 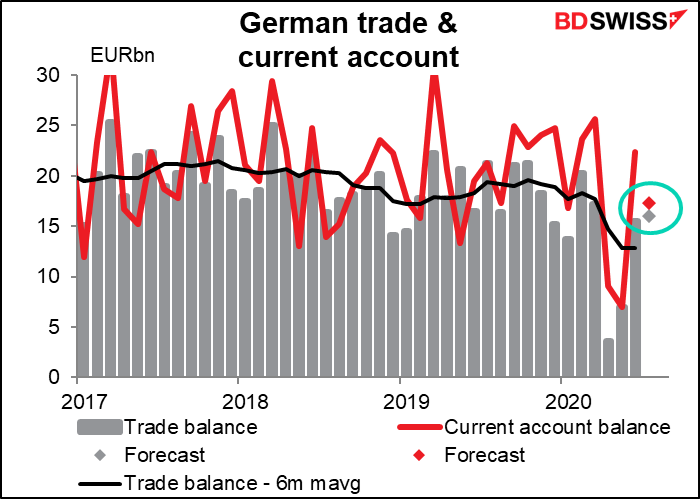 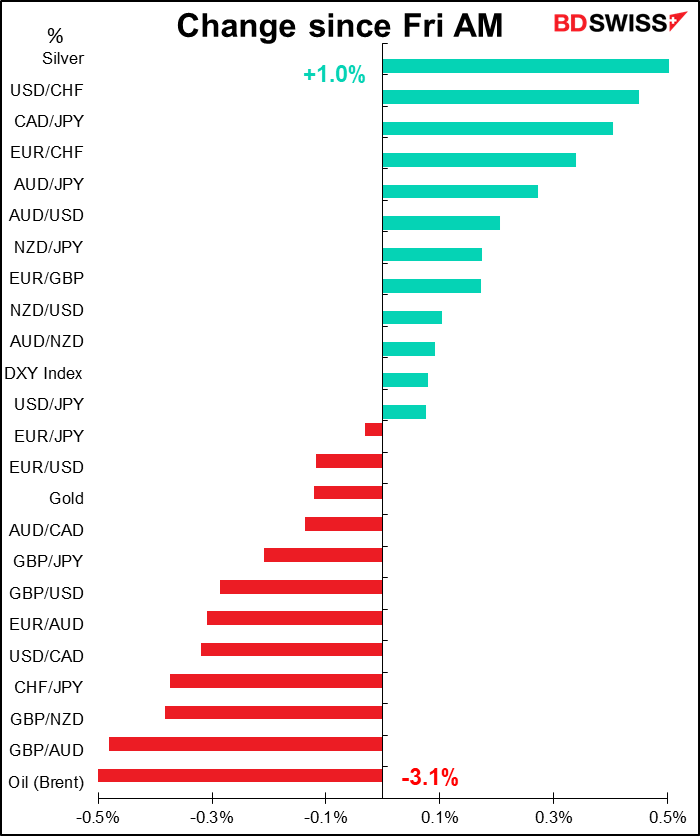