You are at:Home»MARKET PREVIEW»Forex Preview: Dollar Rallies Against The Yen Ahead Of Strong NFP

1. Dollar Rallies Against The Yen Ahead Of Strong NFP
The dollar edged higher against the yen after signs that U.S. job growth likely picked up in December. The news encouraged investors to hope for a stronger than expected Nonfarm Payroll report due to be released later within the day. Specifically, US wages are expected to have increased solidly, which could help to soothe fears about the economy’s health. The dollar was supported by the NFP optimism adding 0.5 percent against the Japanese yen at 108.14 JPY as of 7:00 GMT this morning.*

Don’t miss our Live NFP webinar at 13:15 GMT today. Watch our experts trade the first NFP of the year and analyse the markets live. Register here

2. Gold Steady, Oil Prices Inch Higher
Gold prices hit their highest in 6-1/2 months on Friday as volatile equity markets and the recent releases of weak U.S. data heightened fears of a global economic slowdown. Spot gold was last seen trading flat at $1,294.69 per ounce, as of 7:00 GMT, having earlier touched $1,298.42, its highest since mid-June. Meanwhile, oil prices edged higher after China said it would hold talks with Washington on Jan. 7-8 aimed at solving trade disputes between the two world’s biggest economies. U.S. West Texas Intermediate (USOIL) crude oil futures were at $47.59 per barrel at 7:00 GMT, 20 cents, or 1.1 percent above their last settlement, while International Brent crude futures (CL_BRENT) were last seen trading at $56.39 a barrel, up 43 cents or 0.8 percent.** 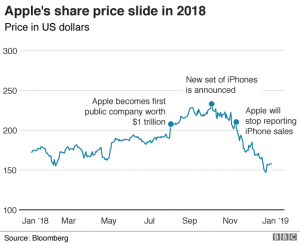 Apple’s stock price dropped almost 10 percent yesterday to close at $142.19, marking the company’s biggest single-day loss in six years. The steep drop came a day after CEO Tim Cook announced a revision to Apple’s revenue guidance for the last quarter of 2018. Cook stated that the primary drop in revenue could be attributed to challenges in emerging key markets, mainly China, and a waning in the sales of iPhones. Meanwhile, Huawei and Oppo, two of Apple’s competitors in Chinese markets, have reported higher valued market shares within the last year.***

You can find and trade all of the above mentioned assets on BDSwiss Forex/CFD platforms.