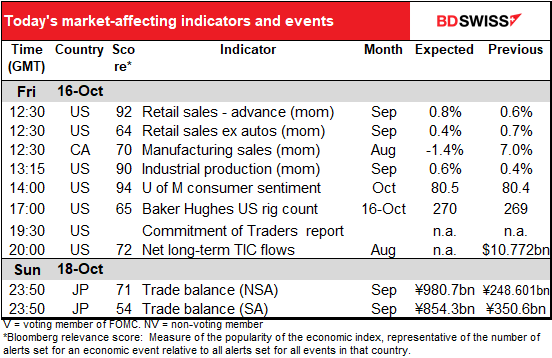 The “risk-off” mood continued as expectations for more fiscal stimulus before the election faded further and further. Trump keeps raising his figure in an effort to compromise with the Democrats, who continue to make progress in talks with Treasury Secretary Mnuchin, but there’s no hope as the Senate Republicans firmly reject the idea that anyone who doesn’t have money already should get any. Thes stalemate shows how important it is that the Democrats not only retake the White House but also the Senate too, otherwise no fiscal measures will be possible and the country will go down, down, down in a burning ring of fire.

The response of the FX market was as one might expect, with USD, JPY and CHF the #1, #2 and #3 gainers and the commodity currencies falling.

That leaves only one question to be explained, namely, why is GBP at the bottom of the list? No extra credit for guessing that one – it’s our old friend Brexit. (I will be so glad on 20 January after which, I hope, I will never have to discuss Brexit or Trump again.)

EU leaders agreed to continue negotiations and called for the UK to make concessions on fisheries, fair competition, and dispute resolution. They said the UK need to “make the necessary moves to make an agreement possible.” This comment didn’t go down well with the UK. Chief UK negotiator Frost said with typical British understatement that he was “surprised by the suggestion that to get an agreement all future moves must come from the UK. It’s an unusual approach to conducting a negotiation.” The Irish Foreign Minister noted that the two sides remain “miles apart” on fishing.

The British have said they’ll set out their next steps following the summit, so we await PM Johnson’s statement later today. My guess is that he will double down on his “we don’t need no deal” position and threaten to walk away from the talks. This is probably just his negotiating position. I expect him to fold eventually like the Big Umbrella he is. However such remarks would still probably be negative for the pound because of course we can never be sure until 1 January.

The EU summit took a strange turn early on when one of the key participants, EU Commission chief Ursula von der Leyen, had to quit the meeting minutes after it began to go into precautionary self-isolation after coming into contact with someone who had the virus.

Oil fell although it recovered later in the day, boosted by the larger-than-expected fall in crude oil inventories and especially in distillates, which fell by 7.2mn barrels or 4.2% in the latest week, the biggest fall since 2003. The market is worried about how the increasing lockdown measures in Europe will affect demand. Mobility data suggests that travel has only recovered to 60% of its pre-pandemic levels in Europe, and it’s about to get a new hit as several European countries restrict gatherings again. 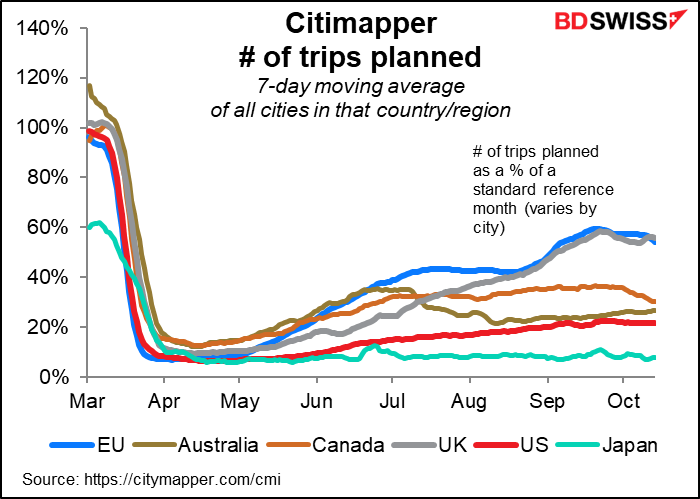 CAD followed oil prices lower yesterday, but hasn’t yet responded fully to the recovery in prices today. I can envision CAD strengthening today if oil can hold onto its overnight gains. However oil seems to be moving lower again.

rsday’s figures for Japanese security transactions showed the largest foreign purchases of Japanese stocks in 18 months, but this was more than canceled out by the second-largest Japanese purchase of foreign bonds this year. I wonder if foreigners are getting more interested in the Japanese stock market with the new PM Suga and his new economic team, who seem to be interested in pursuing more structural reform. .

Australian, Canadian and  US Treasuries offer Japanese investors a yield pick-up over Japanese government bonds (JGBs). In theory this should encourage outflows that would weaken the yen. But this is being offset by inflows from foreigners with the result that there is little net supply or demand to push the yen either way. 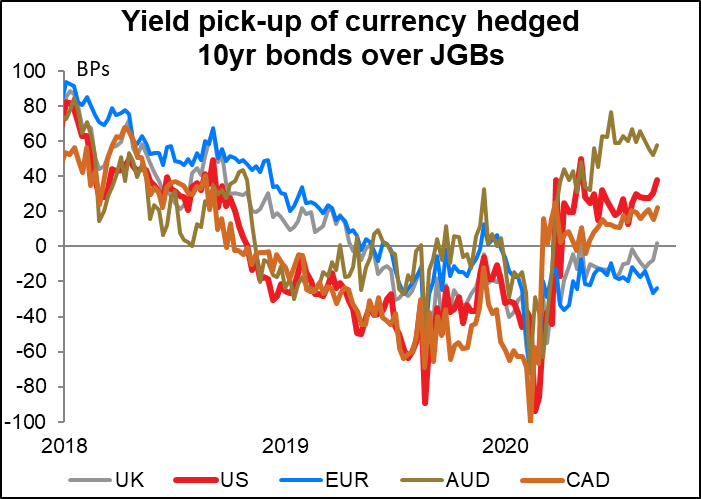 The result has been only a small net outflow of funds from Japan. 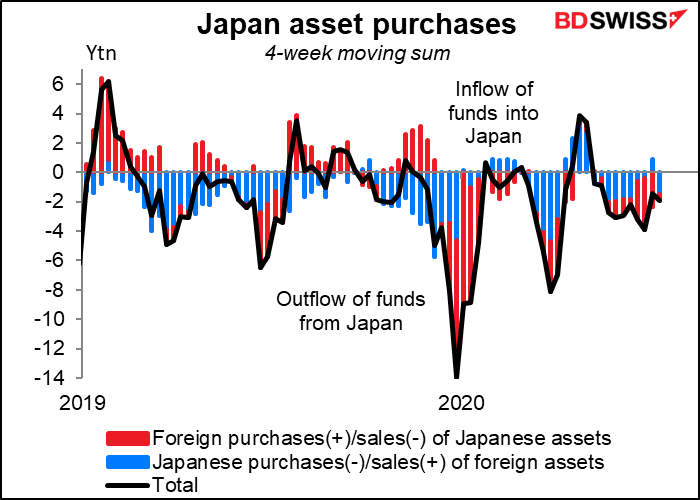 The European day will be dominated by the second day of the European summit meeting. As mentioned above, we’re waiting to hear PM Boris “The Big Umbrella” Johnson’s response to the EU’s negotiating stance.

When North American starts up, the markets are likely to burst into action as we get the loathsome US retail sales. They’re expected to show sales growing at more or less the average pace of the previous two months, i.e. back to normal. That’s not bad, considering that spending on many services is still constrained by the virus. 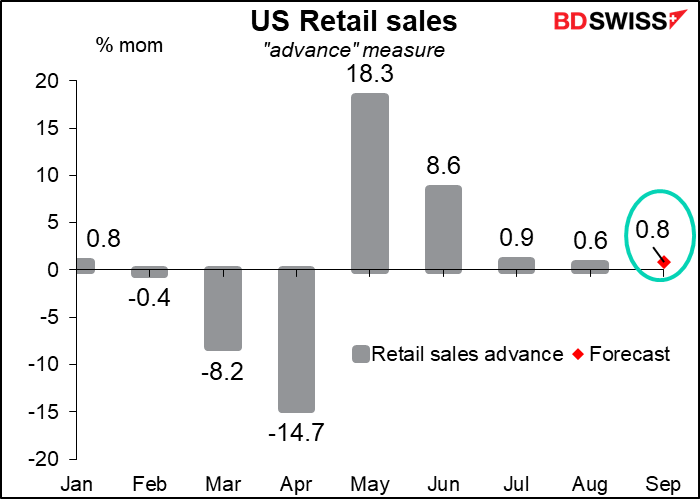 US retail sales are pretty healthy – based on today’s forecast, the headline figure would be 2.5% above the January-February average. 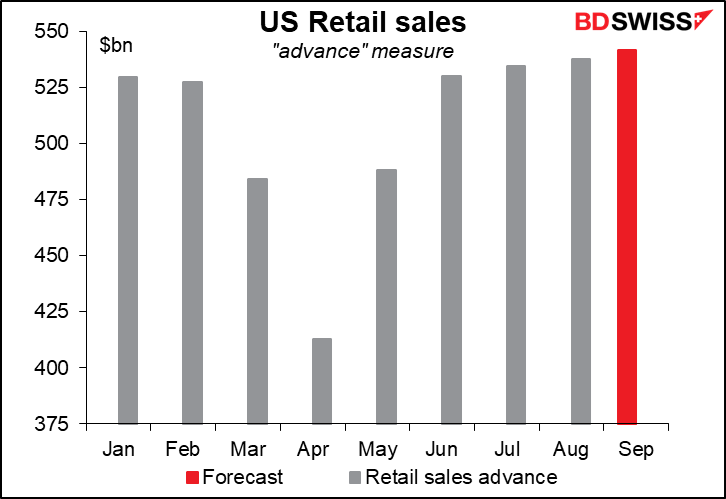 While excluding autos, which may still be benefitting from some pent-up demand, they’re up 1.5% from pre-pandemic levels. 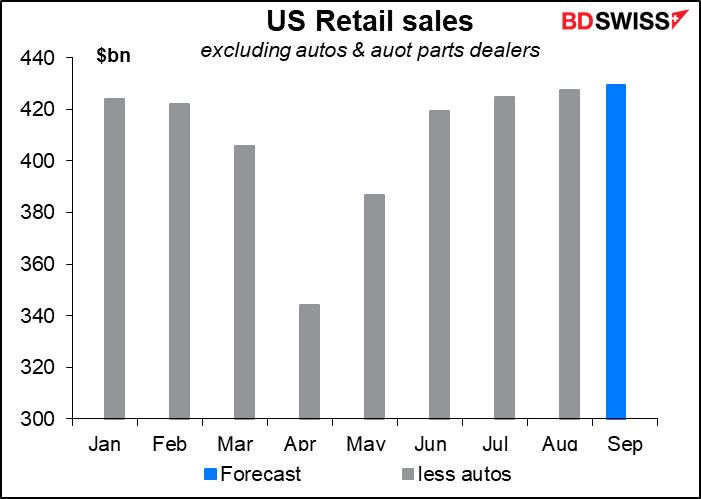 Still, the improvement seems to be petering out. According to experimental weekly data from the Bureau of Economic Analysis, spending was pretty flat in August and September. As more people exhaust their unemployment benefits and the politicians in Washington refuse to allocate the money to keep them alive, incomes – and therefore spending — are expected to decline by well over $1tn in the second half of the year. Not the background that politicians normally want when they fight an election. Puzzling, isn’t it? I am not among those who think that the Republicans are deliberately sabotaging the US economy on the assumption that they’re going to lose anyway, so they might as well make things as bad as possible for the incoming administration. But some people might think so. 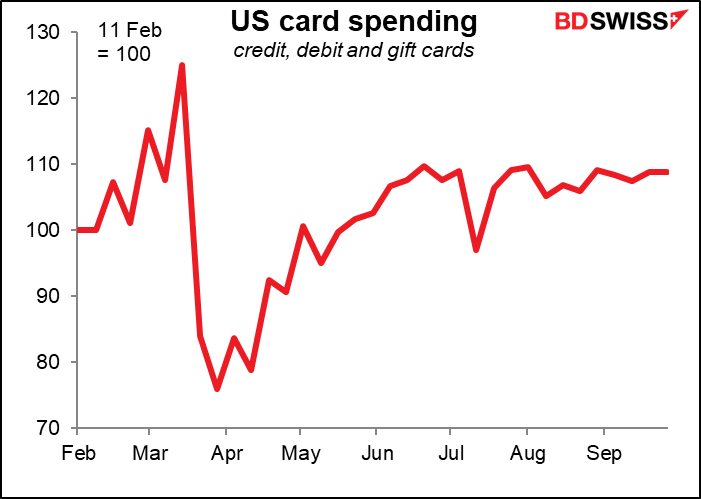 Canadian manufacturing sales are forecast to be down a bit after three pretty healthy rises.  That’s only normal, especially as motor vehicle shipments have fallen. 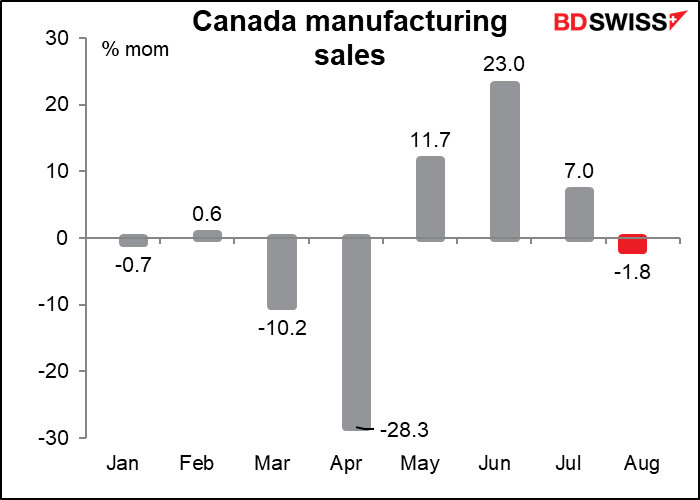 But still, sales aren’t back to pre-pandemic levels. On today’s forecast they’ll be about 6.7% below the January-February average. Again, the same story we’re seeing across so many indicators across the world of the recovery stalling. 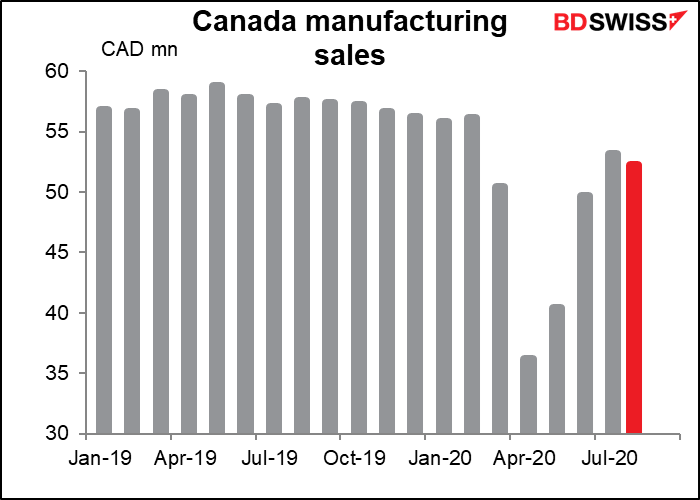 The University of Michigan consumer sentiment index is expected to be more or less unchanged at the high limit of its recent channel. I suppose this sideways move is the result of people whose sentiment is improving because they think there’s likely to be a regime change in the US being offset by those who are depressed because they think there’s going to be a regime change. Or people happy at the rising stock market being offset by people unhappy for having lost their jobs. Still, with so many people dying in the US, I’m always surprised sentiment isn’t lower. 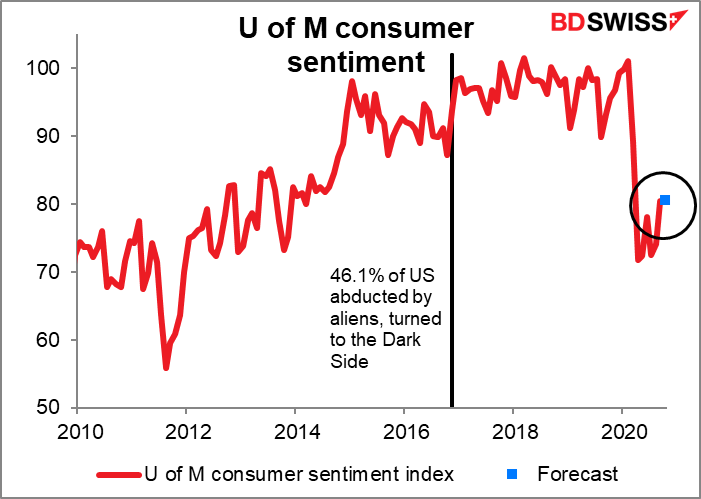 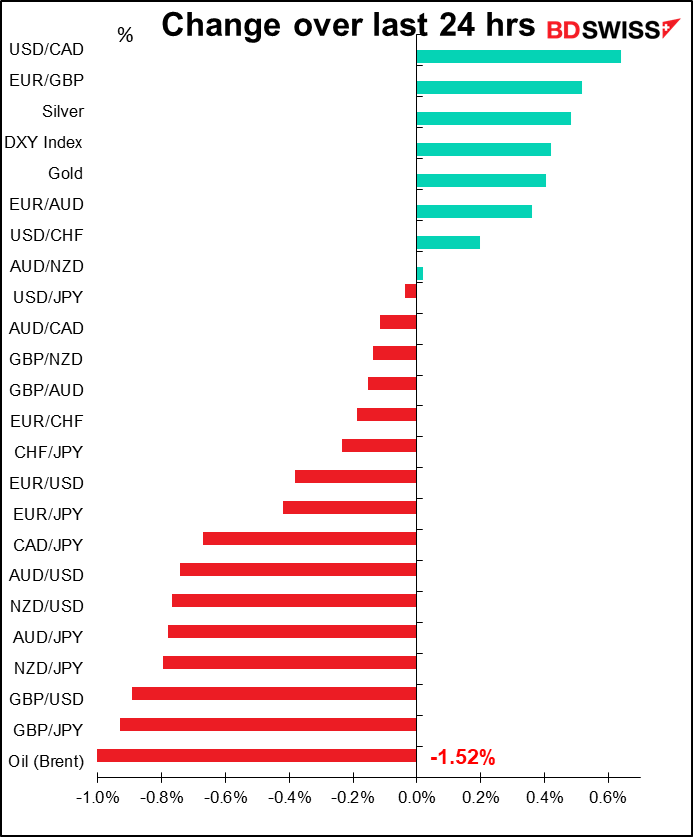