You are at:Home»MARKET PREVIEW»EUR Up, JPY Down; Canadian Retail Sales 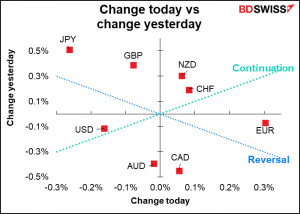 A fairly quiet day in the currency market, with only EUR and JPY showing movements worth talking about.

EUR strengthened for no apparent reason – it seems to be just position-adjustment and profit-taking, which are the all-around catch-all excuses we use when there’s no obvious trigger for the move. Lower EU rates would‘ve suggested a weaker EUR… 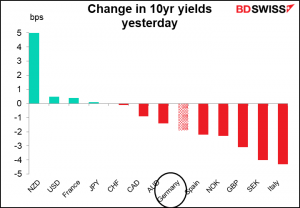 …while lower inflation expectations would suggest less pressure for the European Central Bank to raise rates = a weaker EUR, too. 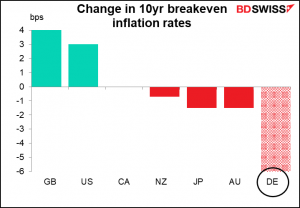 The market has pushed back its expected timing of the first ECB rate following recent dovish comments from ECB officials and the rise in virus cases in Europe, which has caused several countries to tighten or reintroduce restrictions. Germany for example Thursday approved new measures to rein in record coronavirus infections (expanded vaccination, encouraging work from home, and restricting access to public transport for the unvaccinated) as Chancellor Merkel called the pandemic situation in the country “very serious.” (She’s right.) 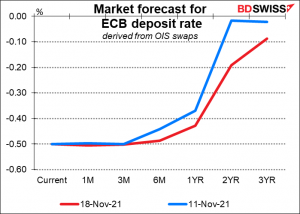 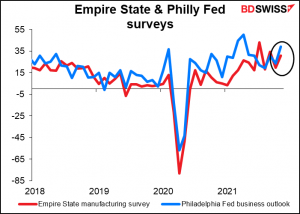 Not to mention some worried comments on inflation by various Fed officials. It was particularly significant that New York Fed President Williams (V), who’s also Vice Chair of the rate-setting Federal Open Market Committee (FOMC) and therefore an influential person, is getting worried. He had been one of the most vocal supporters of the idea that inflation in the US is just “transitory,” but yesterday he warned that Inflation in the US is becoming more broad-based and expectations for future price increases are rising. He said officials would not want long-run inflation expectations to move up significantly more. That’s almost a laugh — according to the research department at his own branch, three-year inflation expectations are already 4.2%, about double what the Fed is hoping for. (On the other hand, a recent paper by an economist working for the Board of Governors cast doubt on the question of whether inflation expectations matter at all. But perhaps Williams hasn’t read the paper yet.) 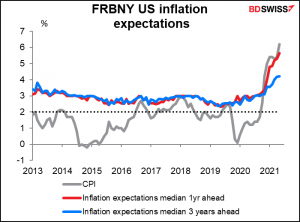 People are getting worried about yet another US government shutdown. The Treasury’s cash balances are getting lower. 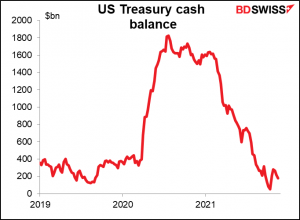 And Treasury bills maturing around the time of the expected shut-down are trading at a discount (higher yield) to bills maturing before and immediately after the problem is expected to be solved. 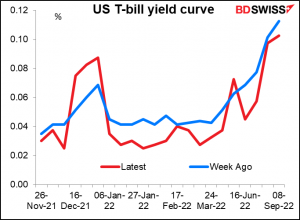 As for JPY, it trended lower (USD/JPY trended higher) during the European and US trading day with no particular trigger except perhaps the “risk-on” mood engenereged by higher US and Japanese stocks.

The Nikkei reported that the government’s expected fiscal stimulus package of spending, investment, and loans would be in the order of JPY 55.7tn or around 10% of GDP, which – surprise surprise! – turned out to be correct. The total size of the package is expected to be around some JPY 79tn. The size of the package is even bigger than the one implemented at the beginning of the pandemic, which is odd as the country’s virus cases are very low now as the majority of the country is vaccinated and they can start lifting their (largely meaningless anyway) lockdown measures, so the economy should bounce back to some degree without any help. 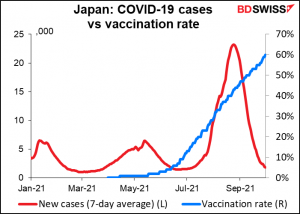 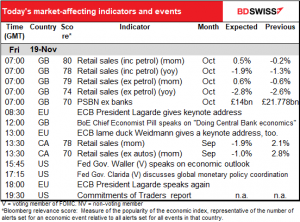 As usual, I discussed the UK indicators (retail sales in this case) the day before, but unfortunately yesterday’s comment didn’t go out. Although the figures are out already, if you’d like to review what the market expectations were, please click here. The data completes a week of generally higher-than-expected data for the UK, including the labor market, inflation, and now retail sales. No surprise that GBP is the best-performing currency this week (+0.66% vs USD, the only G10 currency to gain). 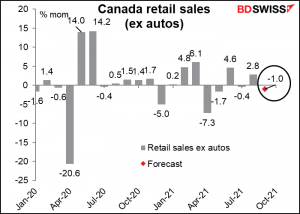 That isn’t so serious, because even at that, sales are expected to be 10.9% above the pre-pandemic level. Poor auto sales probably wiped out any benefit the retail trade may have gotten from the reopening of the economy. 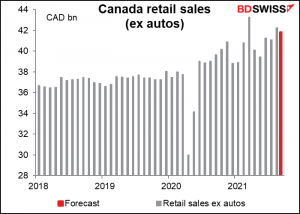 And actually that’s about it today, almost. We have two speeches by ECB President Lagarde, but I don’t know how substantial they’ll be. One is labelled a “keynote speech,” but it looks to me like it’s likely to be about 15 minutes long, in which case it can’t have much detail in it. For the second, Lagarde is the Guest of Honor at the Hessian Europe Reception 2021, whatever that is – the website is in German, which isn’t much help to me unfortunately. The theme will be “Visions for the Further Development of Europe.” I was able to figure out that the reception will be held at Elvis Presly Place in Bad Nauheim. Congratulations to the city for naming something after The King! Also two speeches by Fed governors, although Clarida is a lame duck as he leaves the organization next month. 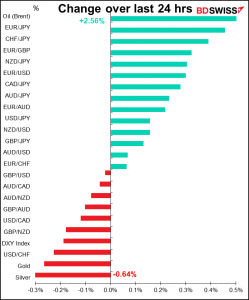