You are at:Home»MARKET PREVIEW»Commodity Currencies Up, safe-havens Down on “Risk-On” move in Bond Markets; EU GDP, US Personal Income & Spending

A classic “risk-on” day in the FX markets, with the three commodity currencies higher and the safe-haven USD and JPY at the bottom. The higher CHF was the only currency to disturb this neat pattern.

Although global equity markets were mixed, the FX move matched that in the bond market, where bond yields moved higher in the major markets. Ten-year US Treasuries were up as much as +7.8bps intra-day yesterday, although they ended the session up a more moderate +2.5 bps at 1.634%. The move was driven by higher real rates as inflation expectations barely moved. There was a similarly large move in Europe, with yields on 10-year German Bunds up +3.8bps to -0.19%, the first time in over a year that they’ve closed above -0.20%. Ten-year French yields (+4.4bps) also closed at a one-year high. 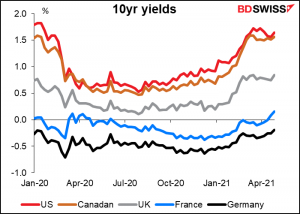 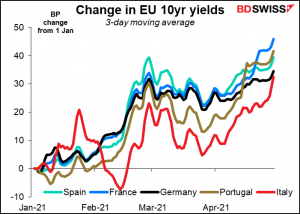 At the same time, gold and silver fell as interest rates moved up and there was less perceived need for a “safe haven.”

CAD was the best performer of the day. It followed oil higher but continued to gain even after oil started to reverse. The currency has been benefiting from several factors: good domestic performance, as shown by Wednesday’s better-than-expected Canada retail sales for February; expectations for spillover from US growth if President Biden’s plans are passed; and monetary policy divergence. In contrast to Fed Chair Powell’s relatively dovish comments on Wednesday, the Bank of Canada was the first central bank to begin tapering down its extraordinary support for its economy when it announced last week that it would cut its weekly bond purchases. 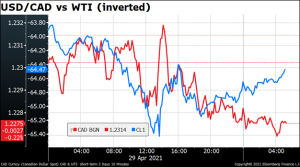 Also, Canadian 10-year bond yields rose more than US Treasury yields yesterday, reversing a bit the widening that we’ve seen in that spread this week. 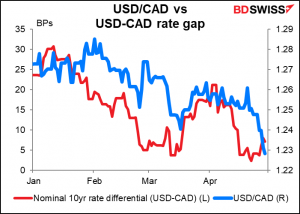 The monetary policy divergence theme could benefit GBP too, as the Bank of England may announce something similar next Thursday. On the other hand, next Thursday is also the local elections in the UK, which may bring separatists to power in Scotland. That’s a big risk for the pound. See this week’s Weekly Outlook, which will be out later today. 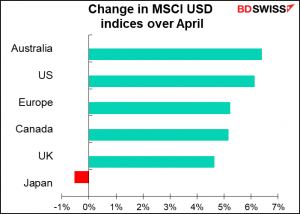 JPY was the second-worst-performing currency even though the data from Japan overnight was better than expected. The unemployment rate fell to 2.6% from 2.9% (had been expected to be unchanged) while the job-offers-to-applicants ratio rose to 1.10 from 1.09 (also expected to be unchanged). Industrial production was up 2.2% mom instead of being down 2.0% mom as expected. On the other hand, Tokyo consumer prices fell a much faster-than-expected 0.6% yoy vs -0.2% yoy expected. The TOPIX index was down 0.4% and JPY weakened nonetheless.

Lots of important data out today!

Unusually, much of it comes from Europe. The day starts with EU GDP figures: first France, then Spain, then Austria, then Germany and Italy, then Portugal, and finally EU-wide. By the time the EU-wide figure comes out, people will have a pretty good idea of what it’ll be, since France, Spain, Germany, and Italy explain 98% of the variation of EU-wide GDP. Even just Germany and France alone explain 89% of the variation with an error that’s usually less than ±0.2 percentage point. 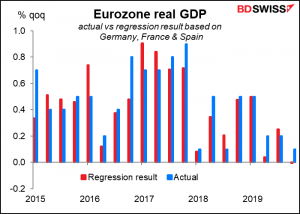 French GDP is forecast to be unchanged from the previous quarter, but all the other countries are expected to show a contraction, as is the EU overall. 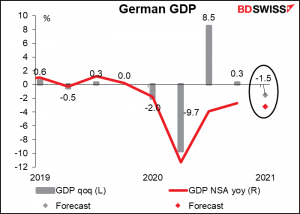 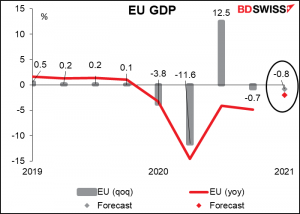 This would be quite different from yesterday’s US Q1 GDP, which was slightly lower than expected but a still respectable +6.4% qoq SAAR (+1.6% qoq).

Next up is EU consumer price index (CPI). (We’re ignoring EU unemployment as that doesn’t have much effect on the FX market.) Headline CPI is expected to rise notably, but core CPI – which still lags far, far below the European Central Bank (ECB) target – is expected to fall somewhat. Umm, bummer, bummer. 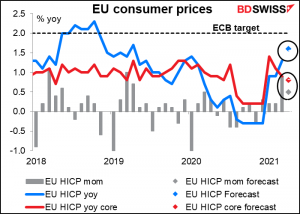 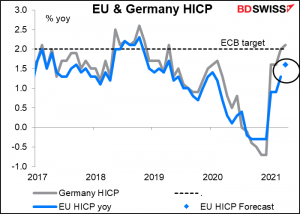 If the rate of increase of core CPI, which is what the ECB worries most about, is falling, then perhaps ECB Chief Economist Lane will start whinging on again about how the strong EUR is a threat to their inflation target. The minutes of last September’s ECB meeting showed that the Governing Council agreed that

It’ll be interesting to see what exactly they consider to be “the euro exchange rate.” EUR/USD has risen from around 1.18 at that time to 1.21 now, but at the same time, the euro’s nominal effective exchange rate vs 19 major trading partners has fallen from 101.98 to 101.08. From an economists’ point of view, it’s the NEER that matters (actually it’s the REER, the real effective exchange rate, but that’s a bit more complicated). I have to admit that in December & January, when EUR/USD was around 1.22, we didn’t hear many complaints, but combined with falling core inflation they could start to get worried again. 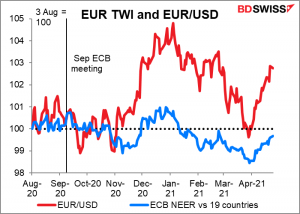 Canada’s monthly GDP is not likely to shock anyone as Statistics Canada has already reported a preliminary estimate of +0.5% mom for February, and – surprise surprise! – that’s the market consensus. The rate of growth should be equal or even higher in March as containment measures were lifted further. 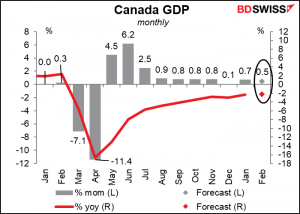 The income and spending figures are expected to be one for the record books! Thanks to the Biden Administration’s $1,400 payments to most Americans during the month, personal income is expected to be up a stunning 20.1% mom, the biggest leap on record. Spending is forecast to rise a substantially lower but still impressive 4.1% mom (well below the record +8.7% increase last May, but that followed a record -12.7% decline in April so it’s an unfair comparison). 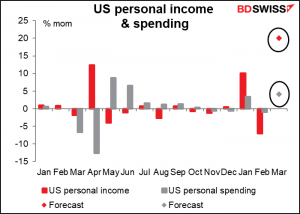 The difference will go into already-high savings, which are being likened to a dam ready to burst and flood the US – indeed the global – economy. 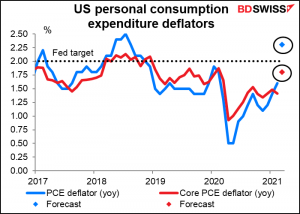 In the old days an inflation rate like this would set off alarm bells as the Fed would tighten policy proactively, that is, six to nine months before it forecast inflation would hit its target rate, but now everyone is well aware that a) they believe the rise in inflation is only temporary, b) a forecast isn’t enough but rather they will have to see it surpass 2% “for some time,” and c) they’re putting more emphasis on employment anyway. So, this figure may be greeted with the same insouciance that the recent higher-than-expected US CPI was. 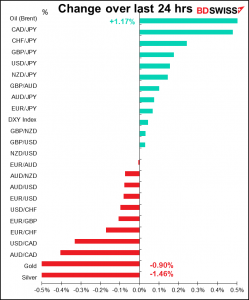