You are at:Home»MARKET PREVIEW»CAD Up, USD Down after FOMC & Biden Speech; Germany CPI, US GDP, Jobless Claims

A day with big events planned resulted in only small moves in the US stock and bond markets as the meeting of the Fed’s rate-setting Federal Open Market Committee (FOMC) went pretty much as expected.

The Fed upgraded its view of the economy in the statement following the meeting, as shown below:

The latter change is the most important, as it upgrades the Fed’s view on the risks. Note that they no longer think the “ongoing public health crisis” presents a specific risk to their policy goals of employment and inflation and that overall, they downgraded the issue from “considerable risks” to just plain ordinary “risks.”

However, the upgrade in view had no impact on policy as the Committee kept both interest rates and the pace of its asset purchases unchanged and made no change to its forward guidance.

Furthermore, in his press conference Fed Chair Powell emphasized the risks, not the improvement, and made it clear that the economy was nowhere near the point where the Fed would start considering normalizing policy. He noted that the “recovery remains far from complete” and said with regards to tapering the Fed’s bond purchases that “it is not time” for that conversation:

As usual, he emphasised that there’s far to go on the employment front, with payroll employment still 8.4mn below its pre-pandemic level and “the participation rate remains notably below pre-pandemic levels.” “The economic downturn has not fallen fully on all Americans, and those least able to shoulder the burden have been the hardest hit,” he observed. 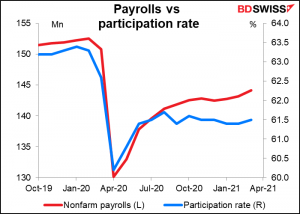 He also repeated his usual view that the recent and expected further rises in inflation are likely to be only “transitory.” 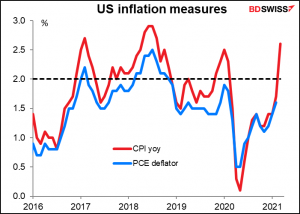 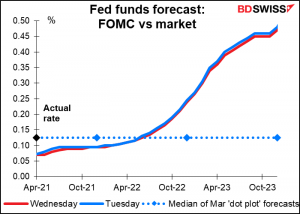 Also, President Biden delivered his first speech to a joint session of Congress in which he outlined his plans on infrastructure, education and other priorities. It features the American Families Plan, which is a $1.8tn package comprised of $1tn in spending and $800bn in tax cuts. To pay for it, the top marginal tax rate would go back up to 39.6% (the Trump tax cuts in 2017 reduced this to 37.0%) and households earning over $1m would also pay the same rate on capital gains (vs 20% currently).

The bill has a notable class bias: it aims to reverse many of the advantages that the wealthy have gained over the years. “The President’s proposal would change the game—by making sure the wealthiest Americans play by the same set of rules as all other Americans,” it said. For example, the bill would increase funding for the Internal Revenue Service (IRS) so that they could audit more of the complex tax returns of the wealthy. It would eliminate the notorious “carried interest loophole” that hedge fund partners use to lower their tax bills.

On the spending side, the bill would provide universal preschool education, make two-year community colleges free, and boost childcare and paid medical leave, among other measures. These improvements affect mostly the lower-paid. President Biden emphasized that 90% of the jobs that the infrastructure spending would create would not need a college degree.

President Biden also took a more hawkish stance against Russia and China than his predecessor, especially with regards to election tampering and the South China Sea.

Politically speaking, the changes may help the Democratic Party to regain traction among the non-college-educated people who should be its natural constituents but have been won over by the “culture wars” emphasis of the Republican Party. Over the longer term this could be good for US stocks – the US stock market has tended to perform better under Democratic presidents than under Republicans, despite the latter’s claim to be “the party of business.” 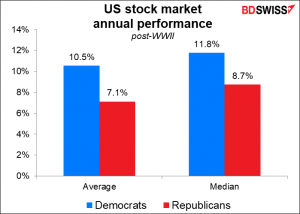 Democrats have also been better for the dollar overall, too. 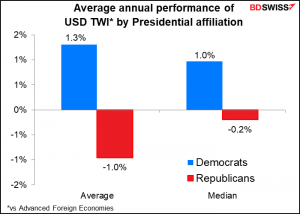 Like the FOMC meeting, President Biden’s speech was pretty much in line with expectations and therefore didn’t cause much of a wave. On the contrary, there was some “buy the rumor, sell the fact” reaction and the growth-sensitive AUD and NZD fell back slightly after the speech. Odd because the S&P 500 rose ahead of and during the speech and kept its gains afterward. Perhaps we will see AUD and NZD regain their previous levels today if stocks keep their gains. 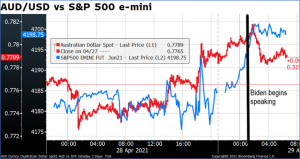 CAD, on the other hand, held onto its gains as oil rose. The US benchmark crude West Texas Intermediate (WTI) closed at a six-week high and kept on rising (falling in the graph below, where the price is inverted)… 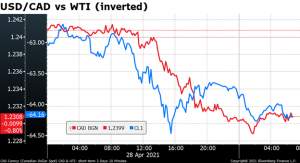 …after Wednesday’s data from the US Department of Energy showed rising demand for oil products and falling inventories of distillates. 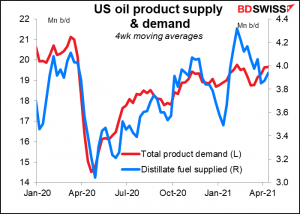 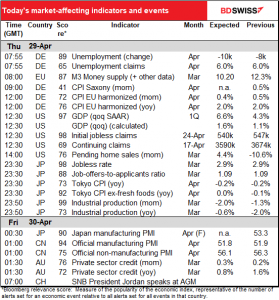 Lots on the schedule today so we better get started. 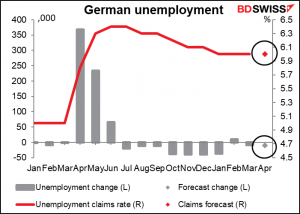 EU money supply data is no longer relevant to the European Central Bank’s decision-making, but loan growth is a matter of interest to them. At the recent press conference, ECB President Lagarde seems satisfied with the rate of growth in bank lending, noting in her introductory statement to the press conference that loan volumes to the non-financial corporate sector have “shown a modest pick-up” over the last quarter. 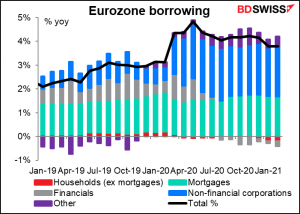 The German consumer price index (CPI) is more important. The mom rate of growth is expected to slow but the yoy rate is forecast to remain unchanged. The figure will be unusually difficult to forecast this month however. April is usually a volatile month because of the effect of the Easter vacation on the prices of package holidays. (This is the West’s version of China’s Lunar New Year problem as the holiday migrates from one month to another.) Furthermore, travel restrictions this year mean that the statistical agencies will have to guess at most prices in this area. Today’s Germany print will be scrutinized to see what impact this issue may have for tomorrow’s EU-wide CPI. 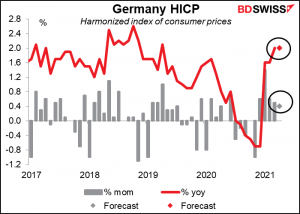 When the US day starts up, US Q1 GDP will be the main focus of interest. It’s expected to accelerate from the already-healthy pace of Q4 2020, driven mostly by high levels of consumer spending. The widening US trade deficit on the other hand should be a drag on growth. Strong growth may be positive for stocks and therefore negative for the dollar, given the logic of the market nowadays. US Initial jobless claims have surprised on the downside for the last two weeks (down = good, in this case). Economists have gotten a bit more conservative as a result and less willing to forecast a big move. Now they’re forecasting the figure will be just a bit higher (+3k) as I guess they figure some mean reversion is inevitable at some point. At this point I think such a small rise after two such big declines would also be seen as positive news. Pending home sales have had a fairly rough few months – not much increase since September. Finally, they’re looking for an increase. I’m not sure how significant this figure is, because while it’s been in the doldrums, home sales have been rocketing. So, I don’t think we’re getting good information about the future pace of home sales from this data series. Or else perhaps the huge surge last May is still working its way through the closing process. 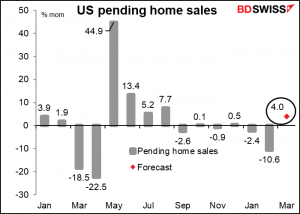 That’s it until the Asian day starts up, at which point we get the usual end-of-month data dump from Japan, with the jobless rate, industrial production, and Tokyo CPI. This week the usual slew of data is followed a bit later by the final manufacturing purchasing managers’ index (PMI). I have to say though that the quantity of data is much more impressive than the quality – the figures are expected to show little change in the Japanese economy. 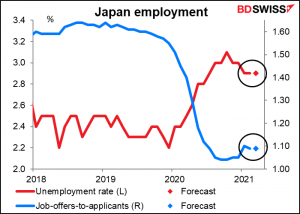 Industrial production is expected to be down from the previous month for the second month in a row. Disappointing considering the strong export data seen out of Japan recently (exports during March, the month in question, were up 4.3% mom.) 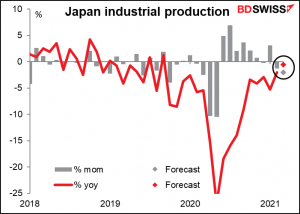 And the Tokyo CPI…At least the core CPI is expected to emerge from deflation. But as we heard from the Bank of Japan earlier this week, the country is likely to see a lower inflation rate this FY than last FY thanks to cuts in mobile phone charges. From China we get the official PMIs, both manufacturing and service-sector. They’re expected to be down a shade but nothing serious – I think this would not have much of an impact on the markets. 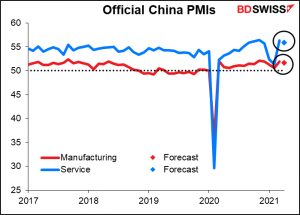 Finally, Australia’s private-sector credit is expected to have a decent rise on a mom rate but see the yoy rate lurch lower as a year ago it was up a record 1.1% mom, thanks to various government programs no doubt. The mom rate has been trending higher as business borrowing stabilizes and housing credit rises. A continuation of that upward trend may prove supportive for AUD. 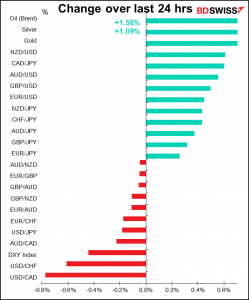