You are at:Home»MARKET PREVIEW»Commodity Currencies Up, Safe Havens Down as Risk Recovers; RBA Meeting 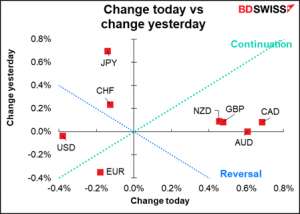 Risk appetite make a comeback with the S&P 500 closing up 1.2% on Friday and most Asian stock markets up this morning. With that, USD, JPY, and CHF fell back and the commodity currencies recovered (as did some commodity prices, notably oil).

It was noticeable though that EUR didn’t benefit much from the weaker dollar. Often the two are mirror images and USD selling = EUR buying. Not now! While EUR/USD was up slightly, EUR/CHF barely budged and EUR/GBP fell (EUR/GBP accounts for 21% of the EUR TWI vs 29% for EUR/USD) and 14% for EUR/CHF.). This was despite – or because of? – Eurozone inflation hitting a 13-year high, as the European Central Bank has made it clear that they consider this rise in inflation to be – wait for it – “transitory” and therefore they do not plan on tightening policy any time soon. The market believes them and thinks it’s going to be a long long time before they hike rates. 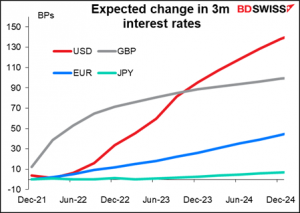 CAD was the best-performing currency. Need I say why?

The rise in oil is particularly significant because it came even as OPEC+ was rumored to be considering raising output today by more than the planned 400k barrels a day (see below). That shows to me the strength of demand in the oil market.
Many other commodities did well too. Iron ore recovered some of its recent losses while coal was around its record highs (China is closed for a holiday today). No surprise then that AUD was up. 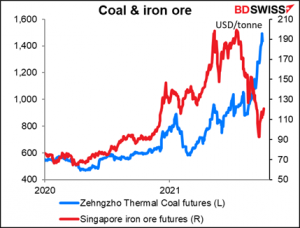 Once again specs increased their long USD (or short currency) positions. The big move this week was the near-disappearance of their EUR longs, once their biggest position but now whittled down to almost nothing. On the contrary, their biggest long is now the DXY index! Next was an increase in JPY shorts. Other moves were fairly small. Specs reduced their CAD shorts a bit.

Long USD and short AUD positions are now at historical extremes (see table at bottom). That sometimes, but by no means all the time, coincided with turning points. 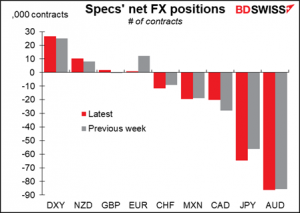 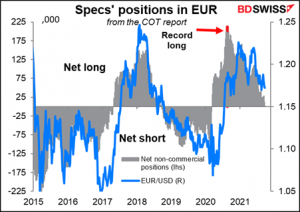 Hedge funds increased their EUR shorts as well as AUD shorts. But they trimmed their JPY and CAD shorts. 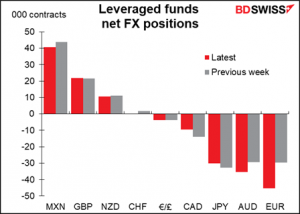 Retail remains long EUR and only trimmed their position modestly. They increased their short JPY, AUD, and CHF while reducing long CAD. 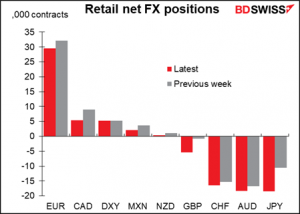 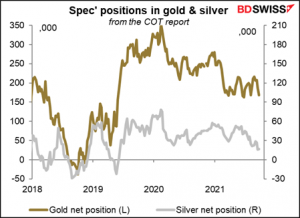 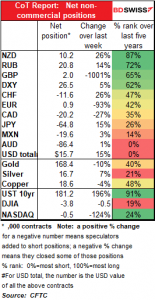 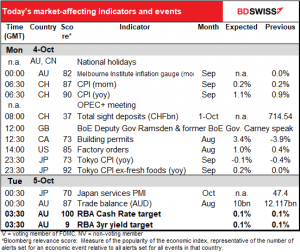 The OPEC+ meeting – the 10-member Organization of the Petroleum Exporting Countries (OPEC) plus ten of their friends (one of whom, Mexico, doesn’t participate in the production agreements). Really, we might as well call this Saudi Arabia, Russia and Friends, since the Saudis and Russians each account for 26% of the group’s total production. Their reference production is 42.1mn barrels a day (b/d), but because of their agreement many moons ago to cut production, they’re now pumping only 36.74mm b/d. They agreed a few months ago to increase that by a constant 400k b/d a month. This meeting should be relatively quick & painless as once again they agree to stick to the plan, but as the price of Brent crude tops $80 a barrel (bbl), some within the group think they should start pumping more.

As you can see, US oil inventories were well above normal earlier in the year but now they’re getting to extremely low levels. 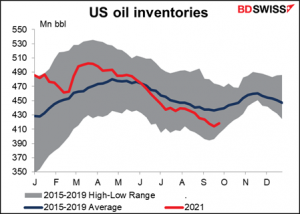 US oil production hasn’t returned to anywhere near where it was before the pandemic hit. 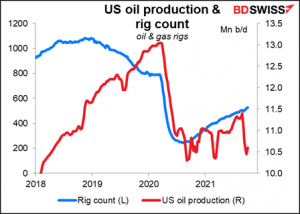 But US demand has! It was well below average last year in the wake of the pandemic, which is why OPEC+ cut production. 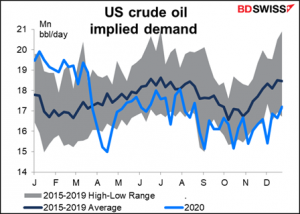 But this year it’s returned to normal. 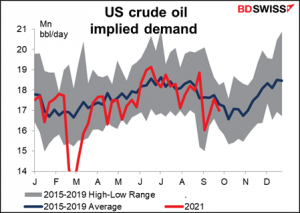 EG US driving, which was well below normal last year, is now back to the high range of normal. 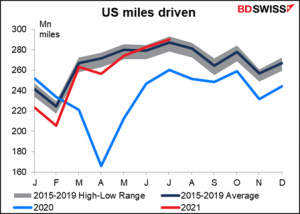 As a result, the market is in extreme backwardation, when the near-term futures contracts are much more expensive than the contracts further out. This indicates a rush to get oil now. 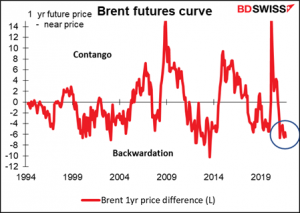 This is why some members of OPEC+ think that they should increase production by more than the pre-determined 400k b/d. The price of both Brent and West Texas Intermediate (WTI), the US oil benchmark, are both up by more than 50% year-to-date. Oil looks set to rise further after China ordered its state-owned energy companies to secure energy supplies for winter at all costs.

It’s especially dangerous as the whiff of stagflation wafts over the economic landscape. Higher oil prices could push up inflation and force central banks to tighten policy before their economies are fully recovered (this is a particular problem for Britain). Saudi Arabia has always been concerned about tipping the major industrial economies into recession because that causes demand for oil to plunge. 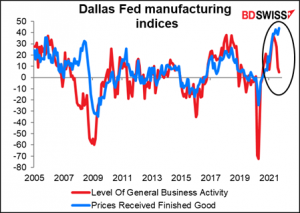 Need I say what impact a larger-than-expected hike in output would have on CAD?
A lot depends though on how much larger – given the strong demand, a small increase (say, 500k instead of 400k) might not have that much impact at all.

The other big event of the day is the Reserve Bank of Australia (RBA) meeting overnight. Of course as usual I wrote the definitive piece on this subject, paying special attention to the impact of higher interest rates on the koala population, in my Weekly Outlook. But since it’s so short, I’ll more or less repeat it here.

The RBA is likely to remain on hold at its meeting Tuesday. Australia is now suffering an unprecedented number of new cases of the virus and continues to operate under a relatively strict lockdown. As a result, I would expect them to maintain their relatively dovish stance (if you remember, last month they extended their AUD 4bn a week bond purchases for three months “until at least mid-February 2022.” 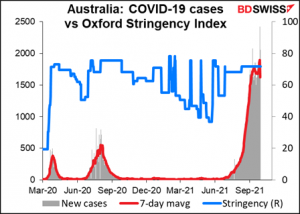 The RBA’s assessment of the economy probably won’t have improved much in the month since the last meeting, especially as the two largest Australian states, New South Wales and Victoria, which together account for some 58% of the country’s population, remain under lockdown. But with progress on the vaccine rollout going better than expected, the RBA should feel comfortable repeating its assessment in the minutes of the last meeting that the outbreak has “delayed, but not derailed” the recovery. That suggests no further action to support the economy is likely to be forthcoming. I expect them to keep policy steady, which may cause AUD to decline somewhat on the “monetary policy divergence” theme as they are expected to be far and away the slowest of the commodity currencies in raising their interest rates. 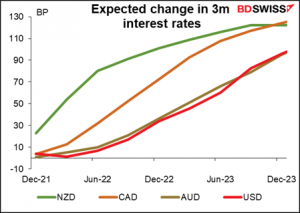 That’s the main excitement for the day. There are a few indicators worth watching, though.

Swiss sight deposits vie with Japan’s unemployment rate as the most boring statistic I follow, except of course sight deposits are weekly, which makes them four times as boring as the monthly unemployment data. Deposits have fallen slightly for four weeks in a row even though EUR/CHF keeps creeping up. What’s going on? At its recent meeting (Sep. 23) the Swiss National Bank said, as usual, that it “remains willing to intervene in the foreign exchange market as necessary, in order to counter upward pressure on the Swiss franc.” So come on already. We’re watching and waiting! 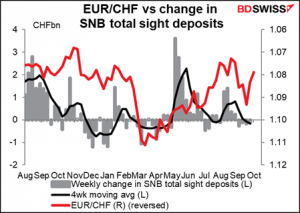 US factory orders have a high Bloomberg relevance index, meaning the market pays a lot of attention to them, but I can never get that excited about them because they seem to be a function of durable goods orders, which are out a week or so earlier (durable goods explains about 94% of the variation in factory orders, which is about as good a correlation as you get in the natural world). So I just present a graph with no particular comment. 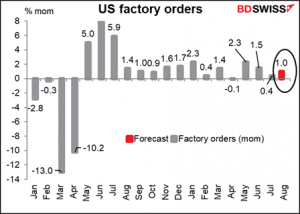 Overnight we get the Tokyo consumer price index (CPI). In theory this should be a big item – the market pays more attention to this than to the national CPI, as the Tokyo data comes out about two weeks earlier – but everyone knows that the Bank of Japan is on hold until Godzilla returns, and anyway bond yields can only move ±25 bps around zero, so what difference does it make? Especially since expectations are that the headline figure should remain in deflation, although the core measure may poke its nose above the line. 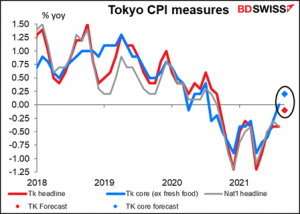 Australia’s trade surplus is expected to fall by about 18% in August. That’s no surprise, since iron ore prices fell 14% in the month… 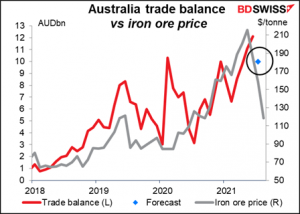 …and iron ore now accounts for about 40% of Australia’s exports by value. 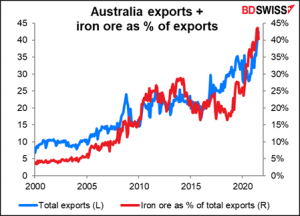 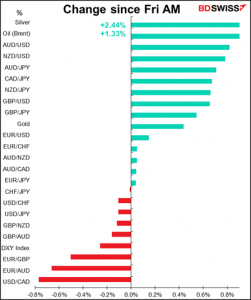