You are at:Home»MARKET PREVIEW»Commodity Currencies Up, JPY & USD down in “Risk-On” mood; Consumer Confidence Figures 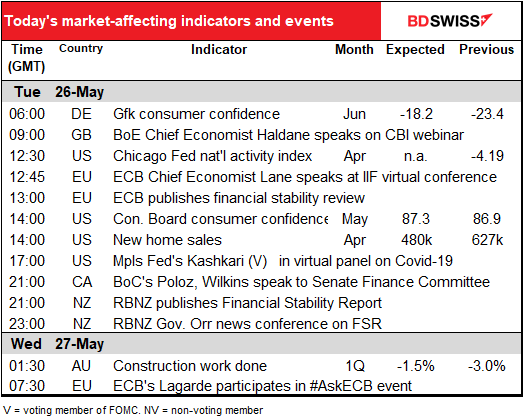 Markets were supported by reassurances from China that its proposed new national security law for Hong Kong “will not change the one country, two systems policy, Hong  Kong’s capitalist system, high degree of autonomy, nor will it change the legal system in Hong Kong SAR, or affect the independent judicial power…” as one Chinese official put it. There has been considerable concern that the law would change Hong Kong’s legal structure, which would impair its function as an international financial center. My view? No comment. But in any event, people who live there seem to be reassured and the Hang Seng index was up 1.9% at the time of writing. 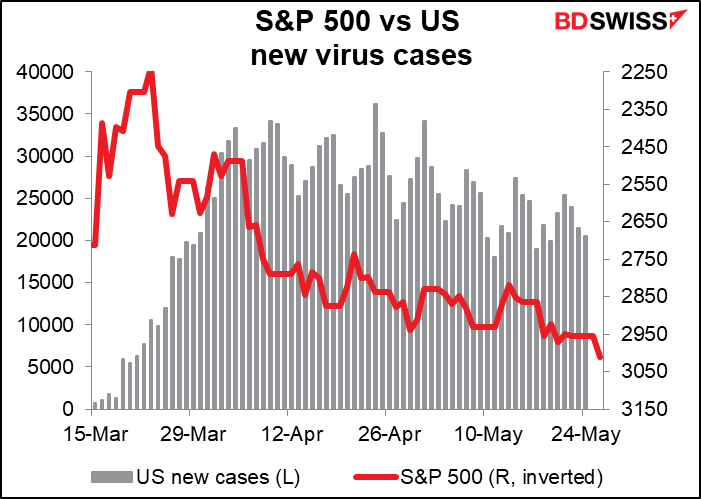 EUR gained on the day even though – or because? – Bank of France Governor and European Central Bank (ECB) Governing Council member Villeroy de Galhau signaled further monetary stimulus. He said that with inflation low, there’s room for the ECB to innovate and act “rapidly and powerfully.” He also signaled he’d like to see limits on the ECB’s EUR 750bn emergency bond-buying program to fight the pandemic loosened even more. “It is in the name of our mandate that we will very probably need to go even further,” he said. Damn straight! With headline EU inflation expected to fall to a mere +0.1% yoy on Friday and core inflation (which is what the ECB targets) only +0.8% yoy, they are nowhere near their target of “close to, but below, 2%”. 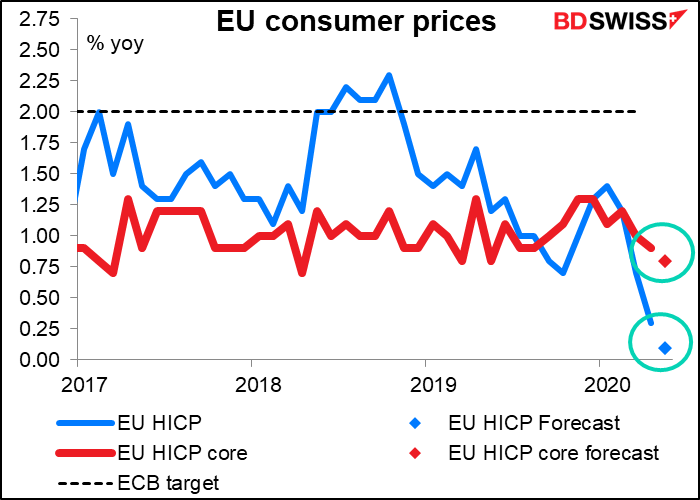 Economic theory says that in general, a looser monetary policy should be negative for a currency, but in this case one might argue that in today’s extraordinary situation, anything that holds out the promise of higher growth is positive for the currency. Not to mention that the more the ECB does, the less the politicians have to agree on, and that’s always good for EUR, since whenever the politicians get involved it starts to look like the euro is doomed to break up.

Oil and silver rose yet again. Oil was up following a prediction from Russia that the market may rebalance in June or July as producers have lowered their output by 14mn -15mn b/d. 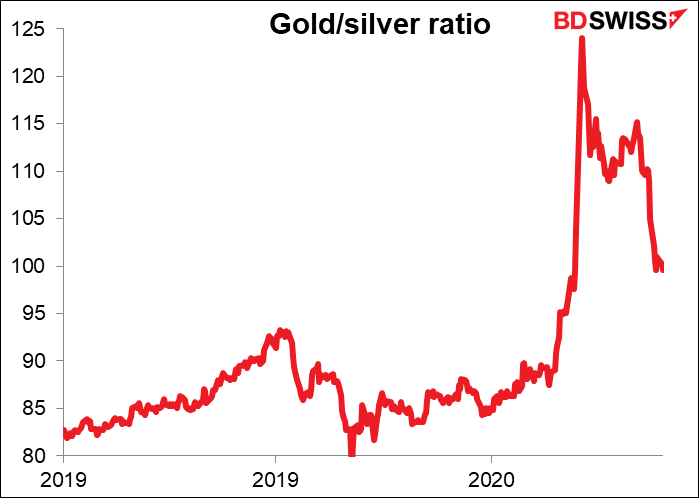 Although both are precious metals, there is no connection whatsoever between the day-to-day movements of gold and silver nowadays. 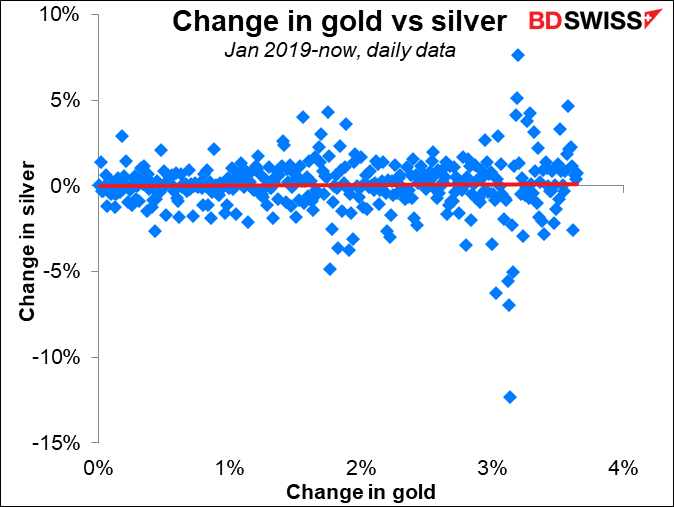 The day starts with Bank of England Chief Economist Andy Haldane speaking on the Confederation of British Industry (CBI) daily webinar. I hope he explains more about his recent comment in the Telegraph newspaper, when he said about negative interest rates, “It’s something we’ll need to look at — are looking at — with somewhat greater immediacy.”

The Chicago Fed National Activity Index (CFNAI) for April is coming out but unusually, there’s no consensus forecast for it. The CFNAI is calculated using indicators that have already been announced. My guess is that the data we’ve had for April has been so outrageously off-the-charts bad that people just didn’t feel it was worth forecasting this. So I’ll make a forecast:  it’s going to be a record low, beating the previous record of -5.17 from December 1974 (oil shock days). In March it was already -4.19 so there’s not much further it has to go to hit a record low. What would that mean? That things were really, really terrible in April. But we knew that already. 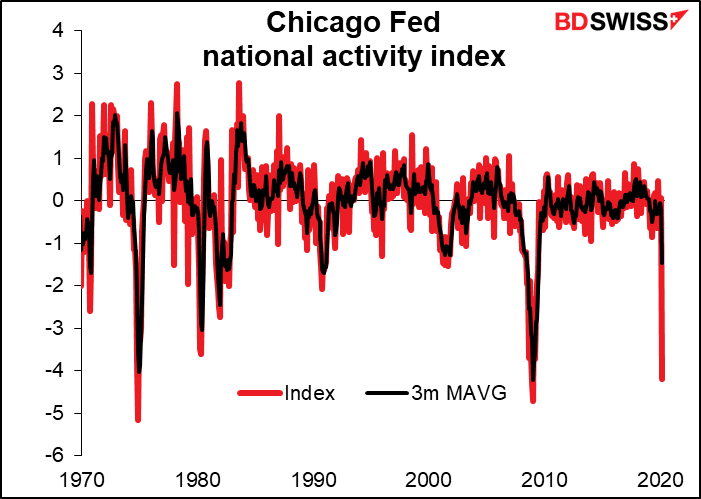 The US Conference Board consumer confidence index is expected to be more or less unchanged from the previous month. This contrasts with the slight rebound in the U of Michigan consumer sentiment index for the same month. That’s probably because the Conference Board measure is more heavily weighted towards the labor market, which obviously is a disaster now, while the Michigan methodology places more emphasis on longer-term macroeconomic expectations, which could be more optimistic. The Conference Board consumer sentiment index has a 95% correlation with current conditions and only 82% with expectations, whereas the U of M index is 39% current conditions and 61% expectations. 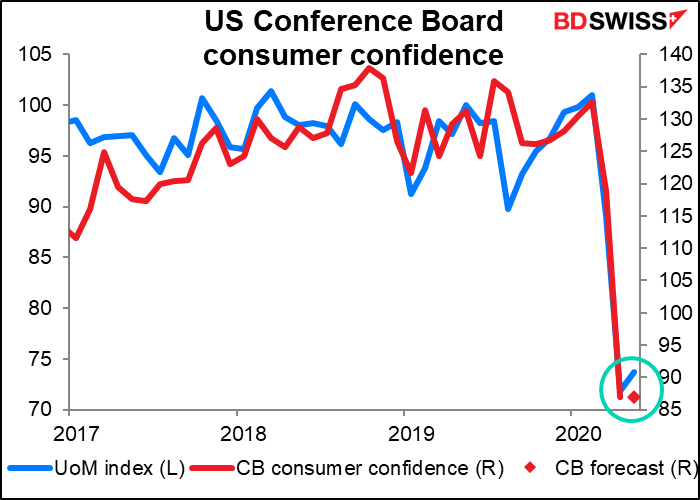 US new home sales are expected to plunge to 480k on an annualized basis in April. This translates into a 23% mom decline and a 38% drop from the recent peak (January). By comparison, existing home sales were down 18% mom in April and off 25% from the peak in February. But recent indications from the mortgage market are that people are taking advantage of lower interest rates to get into the housing market again. I would expect to see a rebound in May or June, especially now that people feel free to walk around without a mask any more. 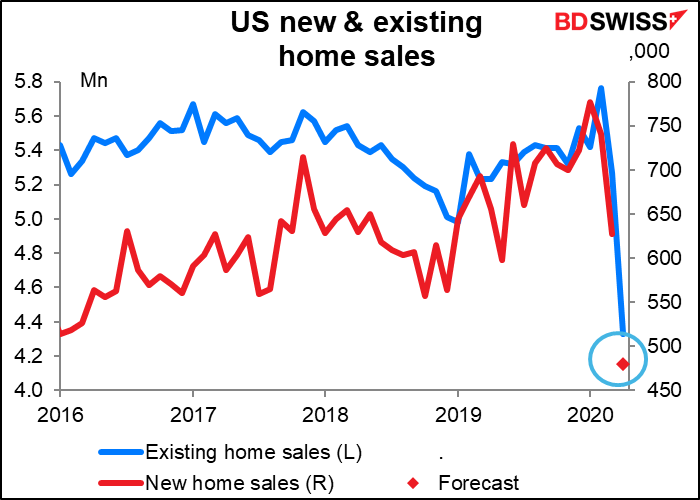 I’m not sure whether anyone will care about the Q1 Australian construction work data coming out overnight – Q1 is ancient history by now. On the other hand, it’s expected to show that construction was weakening even before the virus took hold, which is not a good sign. 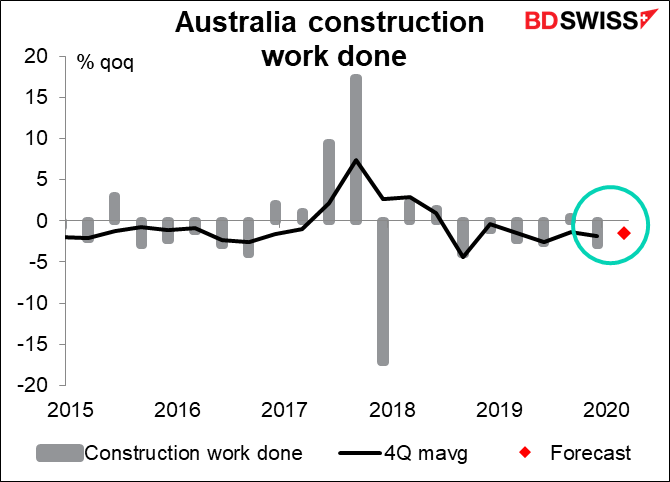 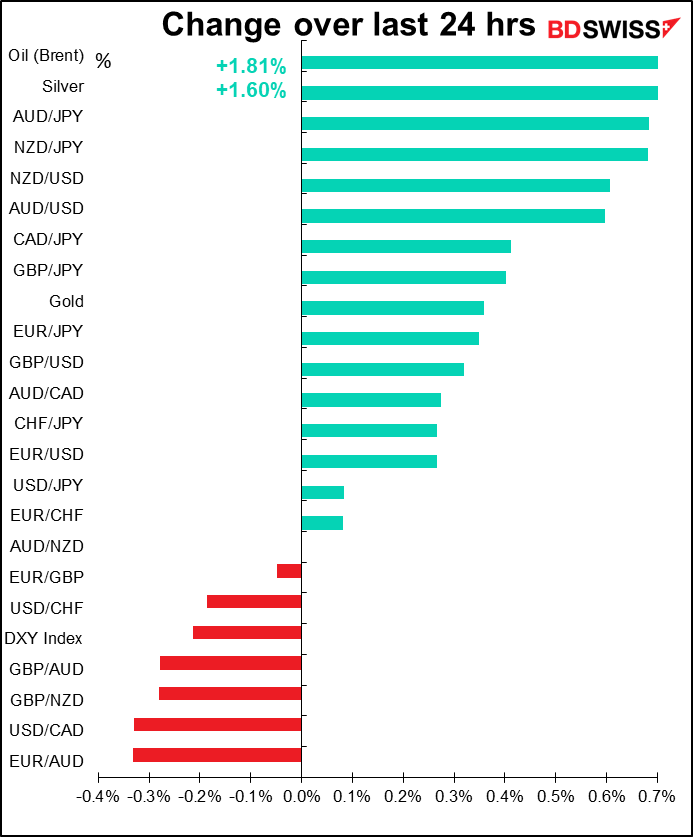