You are at:Home»MARKET PREVIEW»CHF up, EUR Down on Concern over Rescue Fund; Ifo Indices 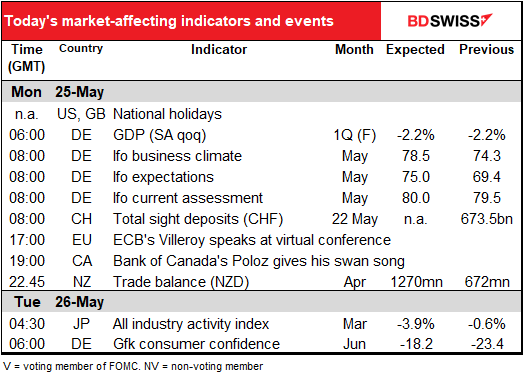 Fairly quiet in markets this morning. Stocks closed slightly higher in New York and are mostly lower in Asia this morning, probably thanks to the increasing tensions between the US and China. Hong Kong is shaping up to be yet another point of friction between the two countries. But S&P 500 futures were indicated up 0.2% at the time of writing, giving the market a general “risk on” mood nonetheless.

The most noticeable trend has been a lower EUR/CHF (higher CHF, lower EUR). I don’t think there’s anything fundamental about this on the CHF side, although the Commitments of Traders report did show an increase in speculative interest in buying CHF (see below).

On the EUR side, it could be due to news of opposition to the German-French plan for the EU recovery fund. Last week, the two countries proposed a €500bn fund that would offer grants to countries to help them recover from the virus and would raise the money by issuing joint debt – the first step towards a unified EU fiscal policy. However, four northern European states — Austria, Denmark, the Netherlands and Sweden – Friday tabled an alternative proposal that would only offer loans, rather than grants. The so-called “frugal four” also said they were against debt mutualization or any “significant increases” in the EU’s upcoming seven-year budget. Instead they proposed a “temporary, one-off emergency fund” to support the recovery and health sectors. The proposal indicates tough negotiations ahead and is therefore EUR-negative. The European Commission is expected to present its plan on Wednesday, which should resolve the issue.

Personally I think that the German-French plan will win the day, because not only do those two countries, the largest EU economies, support it but also Italy and Spain, #3 and #4. Against that, the four tiny countries opposed have little bargaining power. However these things have to be decided by unanimous vote so it’s still possible that it gets rejected.

AUD was higher after Friday’s surprise news that its flagship Covid-19 jobkeeper scheme will cost AUD 60bn less than estimated (AUD 70bn rather than AUD 130bn as initially estimated). Apparently, a lot of the companies filled in their applications incorrectly, plus the government has been able to relax social distancing restrictions faster than initially estimated.

I’ve been reading reports about the reopening of America. Looks like a lot of people there think reopening = all over, even though the number of new virus cases in the US has stopped declining and has leveled off at an incredibly high 22k a day. Nonetheless, from what I read in the news few people are practicing social distancing or even wearing a face mask any more. I expect in a few weeks we’ll see a resurgence of cases in the US. In theory, this should be USD-negative as the US will either have to shut down again or suffer an enormous number of casualties — neither is positive for the economy. 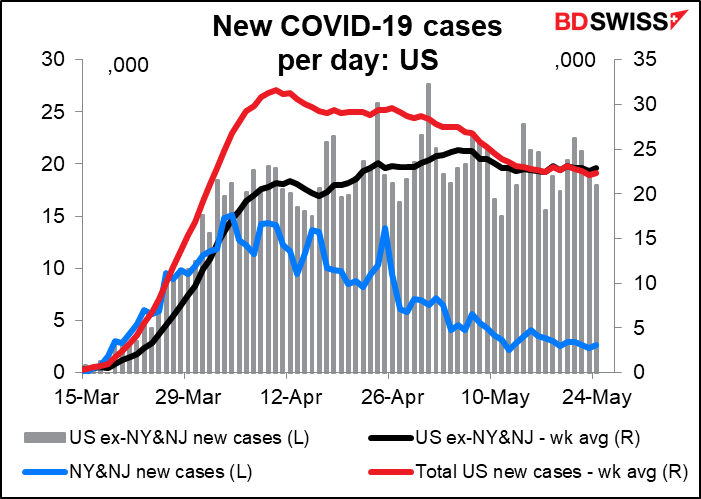 The only question I have is whether it’s going to be the same elsewhere in the world that’s opening up again too. Just looking around where I live, it doesn’t seem to be any different than in the US – most places I go, people aren’t wearing masks. I was in a doctor’s office and even in the waiting room, the one other person there wasn’t wearing a mask. In a doctor’s office, where by definition there are going to be sick people! Personally I would’ve worn a scuba diving outfit if I had had one, complete with face mask and flippers.

Speaking of the virus, I’m amazed that GBP is doing as well as it is when the country is doing as badly as it is. New virus cases in the UK (population 65.4mn) are about the same as in the Eurozone (population 342mn). Added onto that the confusion over Brexit negotiations and it should be continually weakening, in my view. But perhaps all that bad news is already in the price. 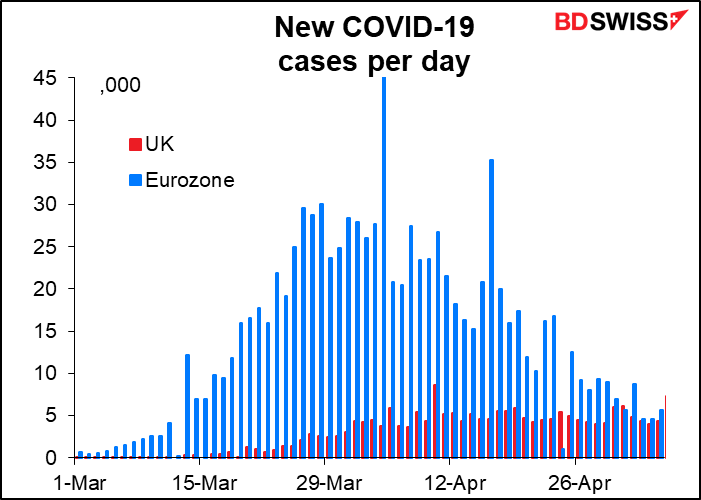 The only currency that bucked the trend was CHF, where there was an increase in CHF longs. This was surprising to me as on Monday EUR/CHF moved up to the 1.06 level from its recent 1.05 range (see below) and the CoT data is taken on Tuesday. A reduction in net EUR longs and increase in CHF longs could mean people going short EUR/CHF. On the other hand, USD/CHF was pretty stable Monday and Tuesday and in fact fell on Wednesday, so it could be just that people who were bullish CHF moved out of EUR/CHF and into USD/CHF.

While speculative positions in CHF are rather long for the last five years, if we look back farther than that, they’ve been much higher previously. People have just preferred to play CHF from the short side over the last few years, perhaps feeling that the Swiss National Bank (SNB) had their backs. My guess is that they’ve probably gotten tired of losing money for two years and have switched views. I don’t think positioning is going to be a problem for CHF for a long time – SNB intervention may be, however (see below). 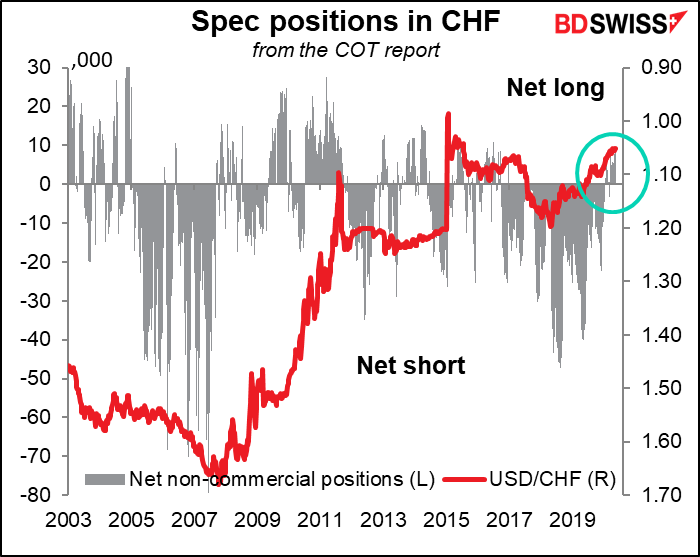 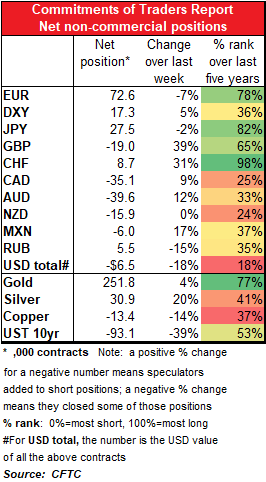 With Britain and the US on holiday today, it’s likely to be a quiet market in FX.

The Ifo indices are expected to recover somewhat. The current assessment is forecast to improve just a bit, but the expectations index is expected to move up noticeably. Both are forecast to remain at exceptionally low levels nonetheless. In other words, things are still lousy and are expected to stay lousy, just not as lousy as they were last month. 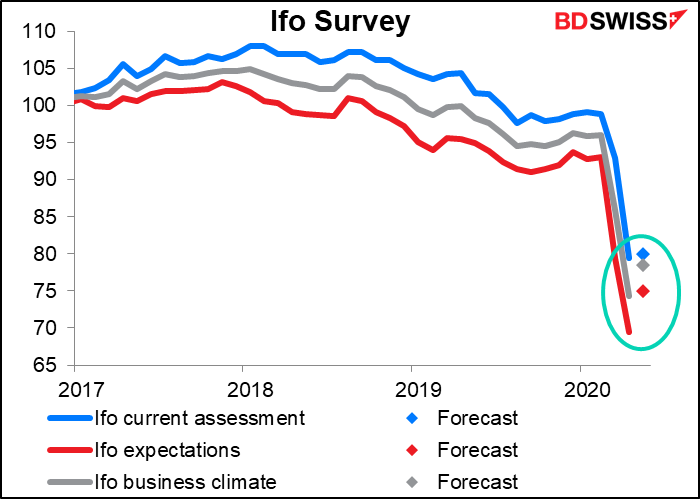 The contrast here with the ZEW survey is noticeable. The ZEW survey shows a much much bigger difference between the current situation and expectations – the 350 analysts and financial people involved in the ZEW survey expect the future to be a whole lot better than the present. 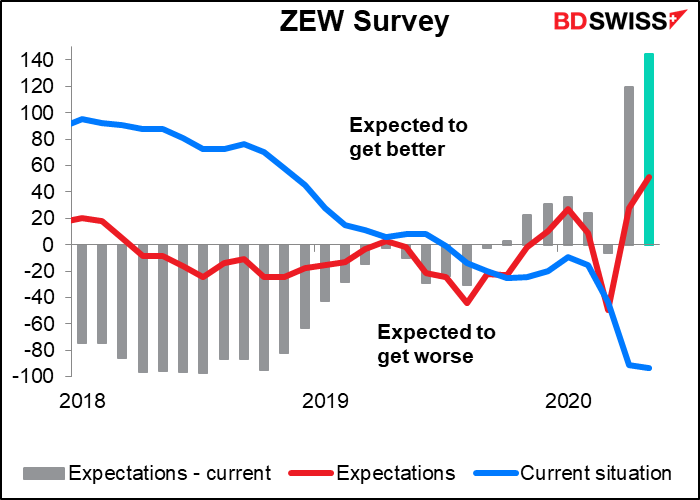 On the other hand, the 6,000+ firms involved in the Ifo survey are much less optimistic. They expect the future to be worse than today, just this month they think it’s going to be less worse (if that’s proper English) than they thought it was going to be last month, not better. 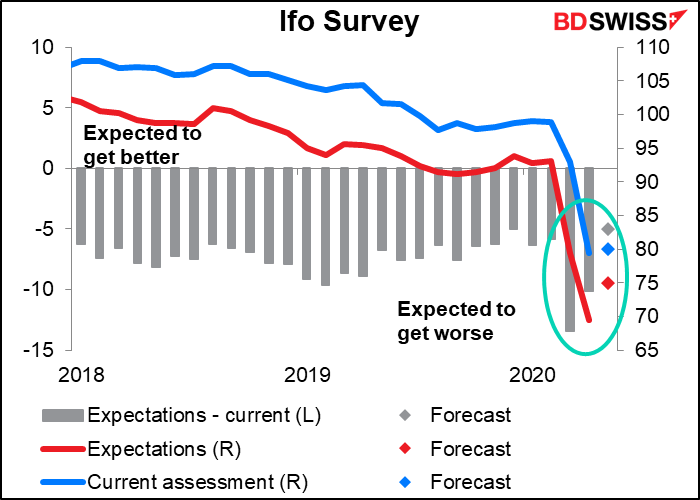 The Swiss National Bank (SNB) has continued to intervene, and although the amounts have come down somewhat, it’s still substantial. It looked like they were defending 1.05 strongly. But last Monday EUR/CHF suddenly jumped up to the 1.06 level without any apparent reason It’s come down again and is now trading below 1.06 now (at the time of writing this morning it’s trading at 1.0567) It will be interesting to see if that sudden jump up in EUR/CHF was due to “supernatural forces*” in the FX market emanating from Zurich or just specs giving up.

*Why do I refer to intervention as “supernatural forces”? Because when I was working in Tokyo, my banks were among those that the BoJ would use to execute its intervention. But it’s illegal – not to mention in bad taste – to reveal your client’s activities. Accordingly, compliance forbade me to write anything about the BoJ’s activities, be it rumor in the market, facts from our trading desk or just speculation on my part about what they might do at certain levels. To get around this, I started talking about “supernatural forces” in the market. 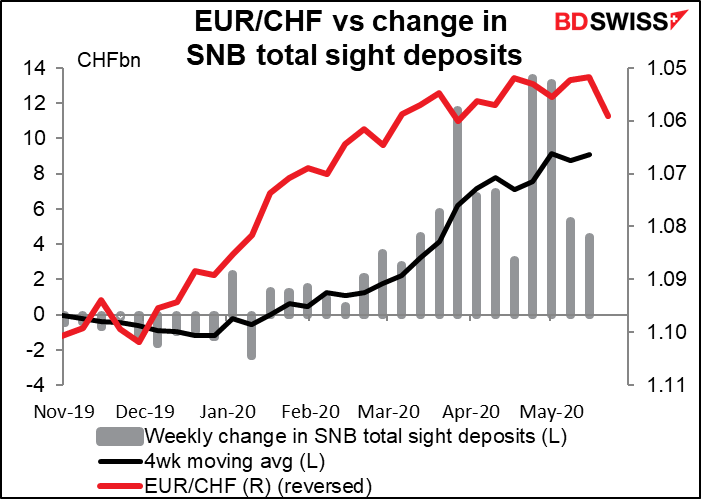 That’s about it for the rest of the day. Later in the day you can hear a speech by Bank of France Gov. Villeroy and the Hanson Memorial Lecture on “Monetary Policy in Unknowable Times” by Bank of Canada Gov. Poloz, his last public speaking engagement before his term ends 2 June. His speech will be streamed live on the Bank of Canada website.

Here’s a different one for you: overnight,  the New Zealand trade surplus is expected to hit a record high in April! That’s a new one recently – the only record highs we’ve been seeing nowadays are in the unemployment data. 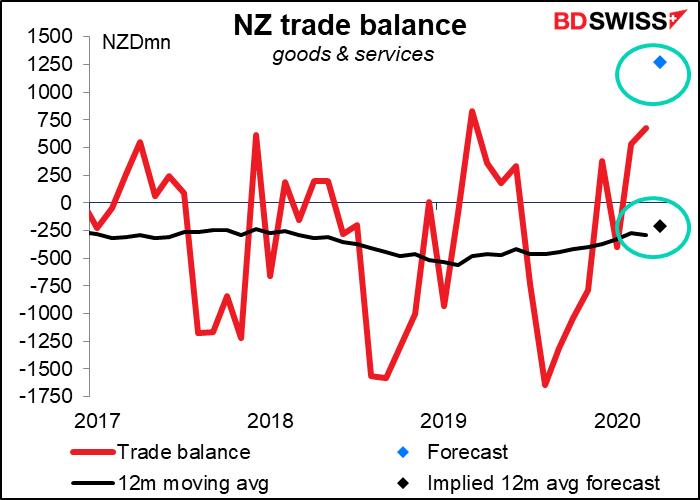 However, this isn’t necessarily a good thing for NZ, although it may help the currency. The improvement is coming largely through a decline in imports rather than an increase in exports. 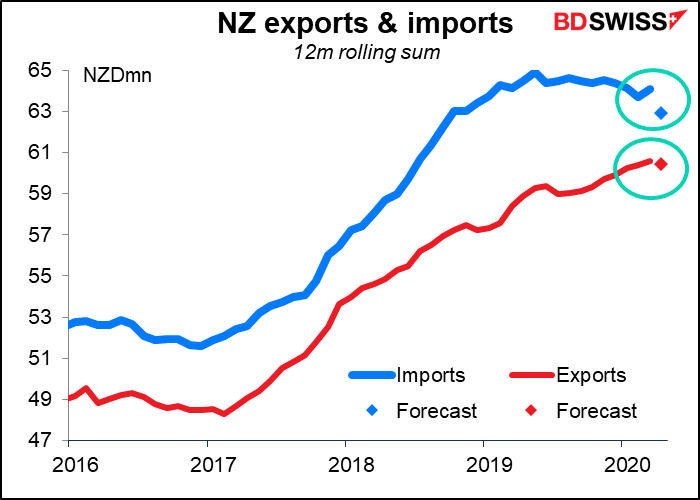 It helps that at least 62% of New Zealand’s exports are edible and only 18% are manufactured goods. Virus or no virus, people still have to eat (and drink – wine is 3% of total exports). 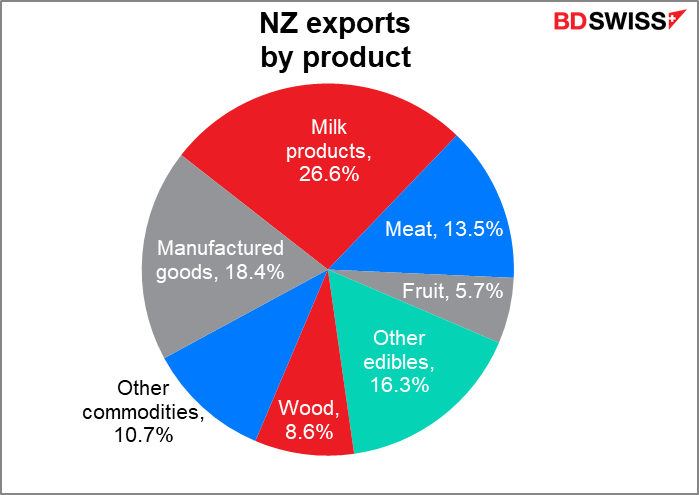 That’s why I don’t think this improvement is likely to be lasting. We’ve seen a big decline in exports from the major manufacturing countries, such as South Korea and Japan. Falling NZ imports is the counterpart to those declines in exports elsewhere. Once activity picks up in New Zealand – as it should soon, because the country has lifted its lockdown – imports should pick up as well as everyone who’s been dying to upgrade their iPhone rushes out to buy one.

Japan’s all-industry activity index is expected to plunge in March. No surprise there. The only surprise may be that it isn’t expected to be a record decline –it fell more last October, after the government raised the consumption tax. Japan has had a relatively lax lock-down and people were still hitting the bars and karaoke in March. 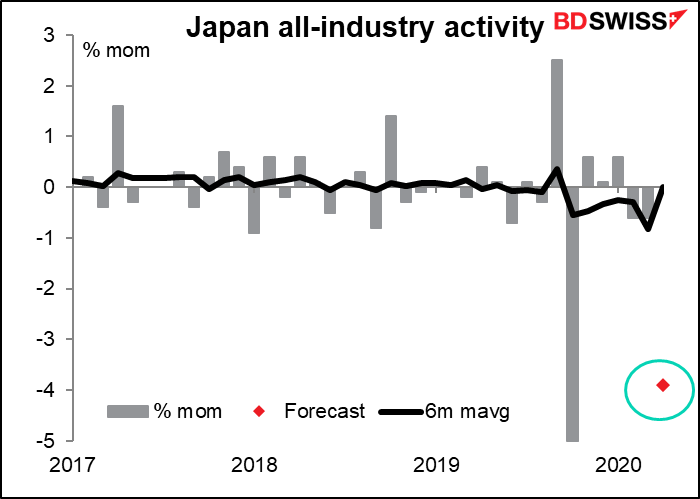 I haven’t followed Germany’s GfK consumer confidence index recently, because as you can see it’s been incredibly boring and not market moving at all. From January 2017 to December 2019 it ranged from 9.6 to 10.8 – i.e. barely moved. Then it fell to 2.3 in April and for May it of course collapsed to -23.4. This is much lower than the previous low of 1.5 set in September 2008 (Lehman Bros month). (This series only goes back to January 2005.) For June it’s expected to bounce back a little, which would be good news. I think consumers all around the world are getting a bit more hopeful nowadays. 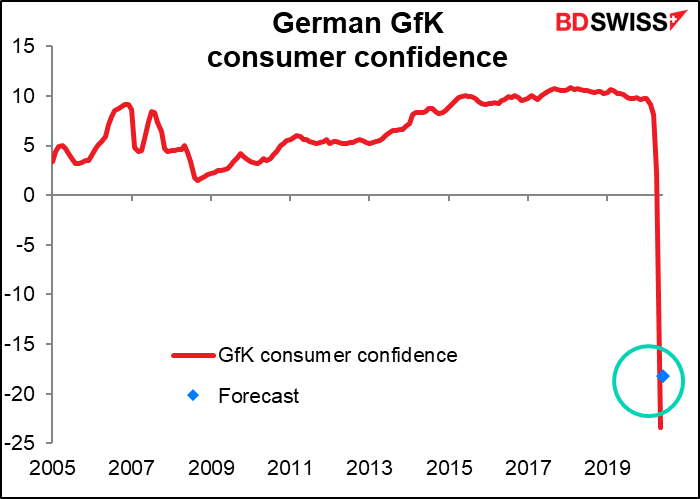 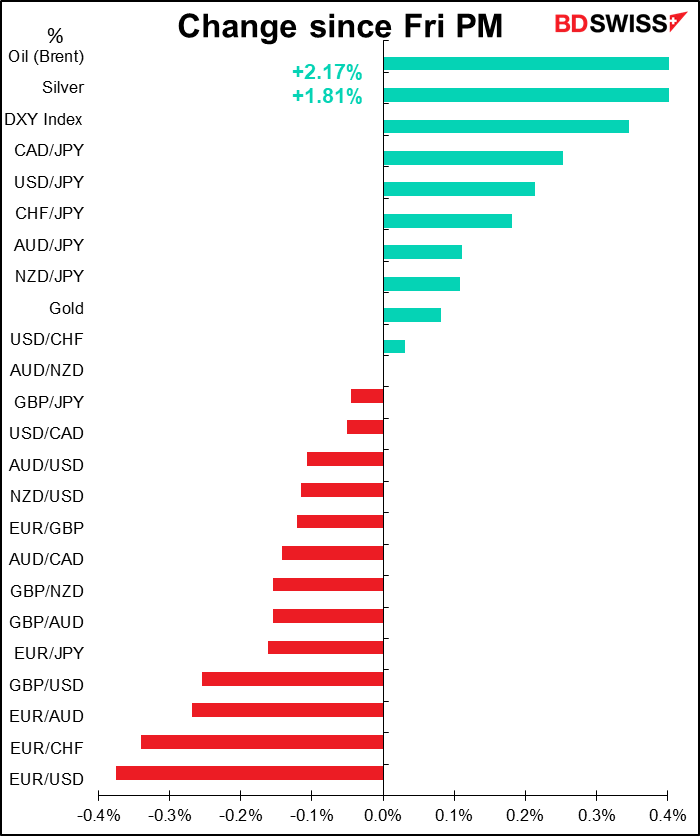