You are at:Home»MARKET PREVIEW»CHF, JPY Up on Safe-Haven Flows; Bank of Japan Meeting 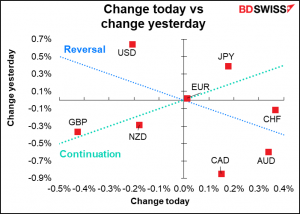 Yesterday certainly qualifies as “risk-off.” Stock markets around the world fell, led by Hong Kong, down 3.3%. Euro STOXX 600 and S&P 500 were both down 1.7% on the day, which is a big move by recent standards. Global bond markets followed suit with yields bull flattening (longer-dated yields falling more than shorter-dated yields) in line with the risk-off tone in the equity markets. Nominal yields fell as did breakeven inflation rates, resulting in lower real yields.

The problem, as you probably know, is the property developer China Evergrande Group. It’s widely reported to have around USD 300bn in liabilities (although others argue that this is grossly overvalued and that most of its debt is in CNY). It owns some 1,300 real estate projects in 280 cities and is associated with 3.8mn jobs a year.

Most importantly, it also owns a bank and a quasi-investment bank that issues what are called in China “wealth-management products.” These are uninsured financial products that sometimes come with a guaranteed return, although how an uninsured product can offer a guaranteed return is beyond me. The problem is that individual investors believe that these are guaranteed and are shocked when all of a sudden they find that they are not. These people tend to take to the streets and the courts to protest and make a big stink, which the government then tries to calm down, sometimes successfully and sometimes not.

The company’s troubles aren’t that new. The stock, which is listed in Hong Kong, has been underperforming the CSI 300 index of Chinese companies since 2018. 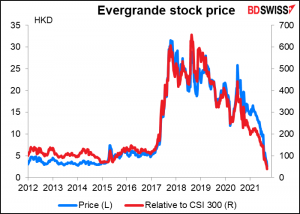 Its bond prices broke par back in September last year and have been struggling ever since. They almost recovered back to par in May but then things quickly went south. (These are a few of the bonds of Evergrande Real Estate Group, which total USD 53.5bn. There’s also another USD 12.7bn of parent company USD debt.) 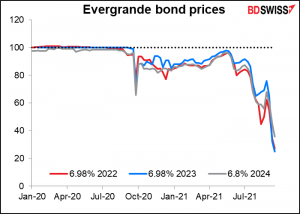 So far there doesn’t seem to be that much contagion from the problem. While Chinese high-yield debt is doing very badly, investment grade – which includes banks – hasn’t been affected. If Chinese IG bonds aren’t affected, then there’s no reason why the S&P 500 should be, either.

But China was closed for a holiday on Monday and is closed today too, so we won’t know for sure until Wednesday. 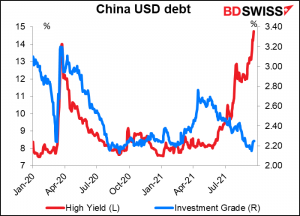 Meanwhile, the Hong Kong market is open and the stock price of mainland banks has plunged, although not that much more than the index overall has plunged. 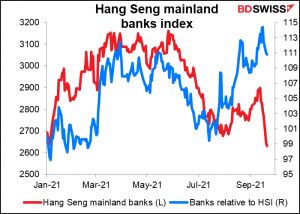 The property sector as a whole has done much worse. 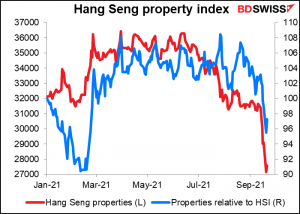 However, the decline seems to have stopped (for now). The Hang Seng index is down only 0.1% this morning.

Standard & Poor’s, the debt rating agency, was relatively sanguine. “We believe the Chinese banking sector can digest and Evergrande default with no significant disruption, although we will be mindful of potential knock-on effects,” they said.

I haven’t read this yet, but I would recommend anyone interested in this episode to read Prof. Michael Pettis’ article, What Does Evergrande Meltdown Mean for China? Prof. Pettis is one of the smartest people around and certainly one of the world’s experts on China, where he lives & teaches. He argues in this article that “The impact of Evergrande has caused financial distress to spread faster and more forcefully than Beijing’s financial regulators expected, putting pressure on them to move quickly to stop the contagion. But they cannot rescue Evergrande’s creditors without also undermining their fight against bad debt.”

Although Evergrande permeated through the stock and bond markets much as one would expect, its impact on FX was less direct. It’s perhaps understandable that CHF was the best-performing currency, since it’s a safe-haven currency that has underperformed recently – so a bit of catch-up there, particularly as speculators are short CHF and might have wanted to close out some of those positions.

On the contrary, the surprise loser of the day was GBP, which is not that sensitive to global risk. There the market is probably pricing in Brexit risk and the impact of rising energy prices (particularly natural gas) on Britain. There’s a shortage of CO2 supplies, which not only hits the vital beer sector but also many industrial processes, including food supplies. The problem is that much of UK of CO2 supplies are a by-product of fertilizer production, which has ground to a halt for now because the soaring price of natural gas, the raw material, has made it unprofitable.

As for the Canadian election, one wonders why PM Trudeau bothered. The result is almost exactly the same as after the 2019 election.

Meanwhile, USD seems to have fallen out of the “safe-haven” basket.

For today, I would expect some mean reversion as the market realizes that, contrary to popular belief, this is not “China’s Lehman Bros. moment.” The Hang Seng index is up 0.6% this morning. Not a full recovery by any means but it indicates some bottom-fishing. I’d expect today to be a day of reversals in the FX market. 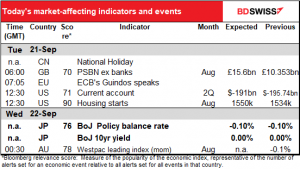 Another day with limited news on the horizon. There is a Bank of Japan meeting overnight, but as I mentioned in my Weekly Outlook, they’re very, highly, extremely unlikely to make any changes (I’m not allowed to say “guaranteed” or “certain,” because of course nothing in life is certain except death and taxes). Please read the commentary there.

During the European and US days, the only indicator that’s likely to move the market is the US housing starts. Starts are expected to be up 1.0% mom while building permits are forecast to be down 1.8% mom. 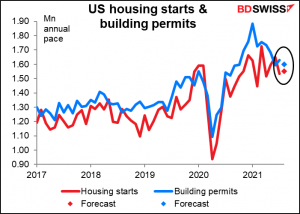 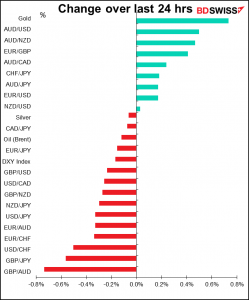