You are at:Home»MARKET PREVIEW»CHF & JPY Up, Commodity Currencies Down in “Risk-Off” move; G20 finmin & CB meeting 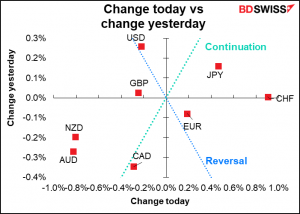 Yesterday was definitely a “risk-off” day as concerns about the delta COVID-19 variant hit investor sentiment.

Even countries where most of the people are vaccinated, like Israel, are seeing rising number of cases (albeit less severe ones). Until recently the markets had been celebrating the arrival of the vaccines, which it was assumed would end the pandemic and enable us to live happily ever after, like Prince Charming’s kiss. Now it seems that the wicked queen is back and spreading the poisoned apples again. If we have to go back into lockdowns and stop traveling etc etc that’s going to weigh on global growth prospects (see this week’s Weekly Outlook, due out later today, for more on this topic). 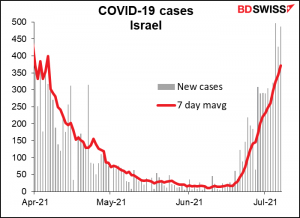 With growth prospects in question, US bond yields and inflation expectations fell further. Japanese Government Bonds (JGBs) and German Bunds also rallied, but French and Italian bond yields rose a bit – a sure sign of “flight to safety” out of the less-safe parts of the European bond market. 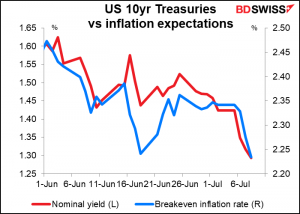 And stock markets around the world came off. Yesterday morning I mentioned that the STOXX 600 was within a whisker of its record high; it subsequently had its worst day of the year, down 1.7%. US stocks fell less though and were off their lows by the end of the day. The VIX index, a measure of fear in the market, also came off from its highs, indicating that people had calmed down a bit by the end of the day. But Asian markets are generally lower this morning, with a few exceptions (notably Hong Kong, +1.1%).

CHF and JPY gained, as one would expect on a “risk-off” day. The anomaly was USD. It seems that sometimes USD trades as a safe-haven currency and sometimes it doesn’t. Yesterday was one of those days that it didn’t. Perhaps what’s happening is investors who were funding carry trades with EUR closed out those trades due to risk aversion. That would account for the rise in EUR and fall in USD.

CAD was lower but outperformed the other commodity currencies as the oil market bucked the trend. The US Dept of Energy announced that crude oil inventories fell 6.9mn barrels in the latest week, the seventh consecutive weekly decline. At the same time, refiners supplied a record 10mn barrels of gasoline a day as demand for the summer driving season picked up. With demand increasing and inventories falling, prices rose. 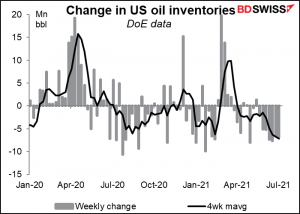 US oil inventories are now below the normal range for this time of year, a far cry from last year’s excesses. 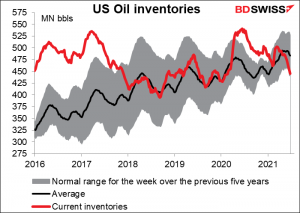 For today, I would expect to see some “mean reversion.” I think the signs are that markets have calmed down a bit – the Eurostoxx 600 futures are trading higher this morning. I would therefore expect to see a “reversal” day in the FX market, with the commodity currencies outperforming and JPY and CHF falling back. 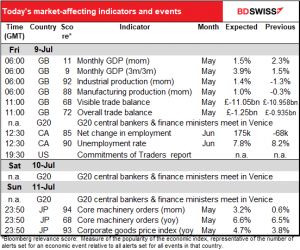 The UK GDP and industrial/manufacturing production figures are already out (the trade data will come out later, for some reason; usually they’re all released at the same time).

The figures that were released were generally disappointing. 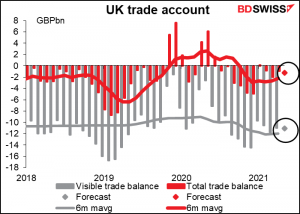 Today’s Canadian employment data may be important in setting the scene for next week’s Bank of Canada meeting. The number of jobs is expected to rise for the first time in three months. 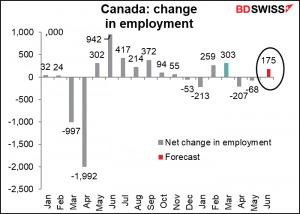 …while the unemployment rate is expected to fall. This could encourage thoughts of a more optimistic Bank of Canada that would be positive for CAD, but of course any such impact could be swamped by the general risk appetite. 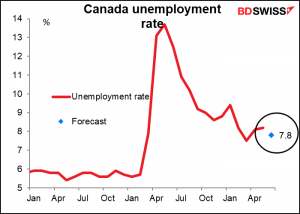 The G20 meeting will attract a lot of press, and there will of course be any number of bigwigs there giving press conferences or interviews. Yet the topics they’ll be focusing on aren’t the main issues for the FX market nowadays: corporate taxes, climate change, and vaccines. There may be some discussion about debt relief for emerging market countries, but not usually the ones whose currencies are actively traded by retail accounts. There will be a number of speeches and panel discussions on Sunday, including one with ECB President Lagarde on “green financing,” but these are probably not the major factors moving the FX market nowadays.

Monday morning, Japan releases its core machinery orders. These are an important indicator for Japan although for the life of me I can’t see why, because it’s so hard to discern a trend in them. This month it’s expected to be up, but that says nothing about what’s likely next month. 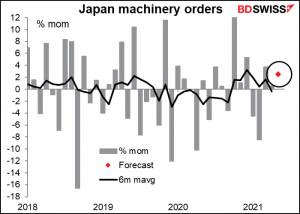 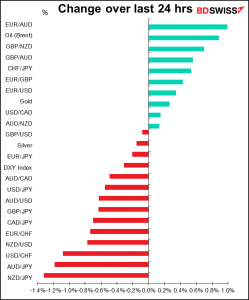