You are at:Home»MARKET PREVIEW»CAD up on higher Oil Prices, AUD down as RBA Eases; Today’s Schedule: Nothing Major – Just the fate of the World 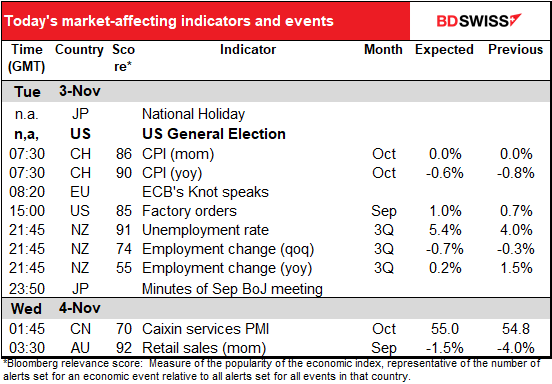 CAD was far and away the best-performing currency, as you can see.

I get tired of showing this graph, but they do say that “a picture is worth 1,000 words,” and since I get paid by the word, this is the easiest way for me to get rich:

So then the obvious question is, why was oil up 6% in a day, when everything I’ve been hearing about it has been negative? The answer, according to Bloomberg, is “increasing  signs OPEC+ will delay a planned easing of output cuts.”

(In case you don’t know the background, OPEC plus a few other producers – notably Russia – agreed some time ago to cut output to prevent prices from collapsing. They have a schedule for relaxing those output cuts (relaxing an output cut = increasing production). They allowed some increase back in August I think it was and were planning another 2mn barrels a day (b/d) increase from January.)

The Russian oil minister Monday met with Russian producers to discuss delaying the production increase, which I gather was taken as a good sign.

I’m surprised at the jump in prices, because as Bloomberg also said, “OPECO+O has been dropping hints for weeks that its plan to add almost 2mn b/d of supply from January is being reconsidered as demand falters.” So I don’t understand why this came as such a big surprise to the market. I guess it’s the difference between hints and the first sign of action.

On the other hand, there was also a story that Libya’s oil output has reached 800k b/d and the country is targeting 1.3mn b/d by the beginning of 2021, according to the chairman of the National Oil Corp. (NOC). This is thanks to a truce in the nation’s civil war, which allows NOC to ramp up production at previously idled fields and ports. That would seem to offset more than half of what OPEC+ is planning on doing, so I’m surprised the market is so excited. 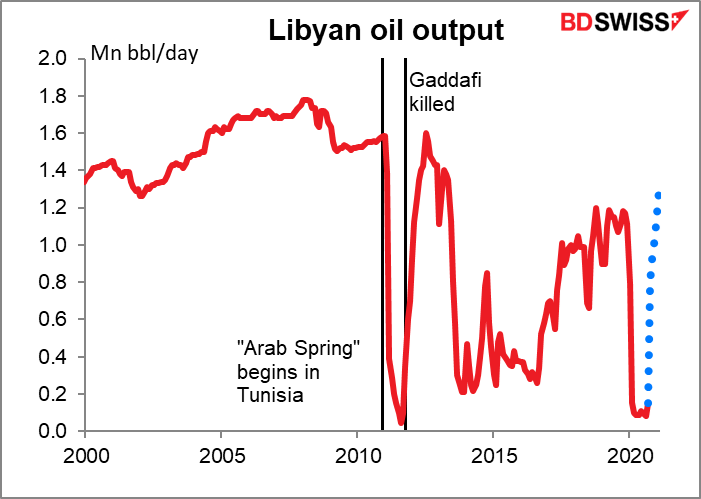 AUD was higher too but coming off this morning after the Reserve Bank of Australia (RBA) cut rates and increased its quantitative easing (QE) program, just like I told you it would. The RBA lowered its key Cash Rate and its 3-year yield curve target to 0.10% from 0.25%, as I said it would (and admittedly everyone else said, too, but hey, let me enjoy one of my rare successes). The RBA also said it would increase its QE program with a focus on the long end of the market – it will buy AUD 100bn of government bonds with maturities of around 5-10 years. It also lowered its deposit rate to zero and said it “is prepared to do more if necessary.” RBA Gov. Lowe expressly noted that one of the impacts of the move would be “contributing to a lower exchange rate than otherwise.” I think AUD may be in for further decline unless risk appetite takes off.

It looks like we’re in the middle of a round of further easings that may cancel each other out to some degree. The Bank of England is likely to increase its bond purchases at its meeting later this week, while the European Central Bank (ECB) has effectively promised to ease policy further when it meets in December. Since FX is a relative game, if both countries ease policy, then nothing has changed relative to each other and there should be no change in FX rates, either.

Which makes me think:  which central banks can’t or won’t ease further? The #1 there is probably the Bank of Japan, which is already doing nearly all it can. So perhaps we can expect the yen to appreciate based on the likelihood that the BoJ is stuck. However in fact it does have room to buy more bonds and Exchange Traded Funds (ETFs), so in an extreme situation it could join the party, too. But its reluctance to do so for some time indicates that the bar to action is extremely hihg.

In fact if we look at the shadow policy rates – the policy rate adjusted to take into account the impact of other easing measures – Japan is the only country (of those that we have data on) that saw its shadow rate rise in October. 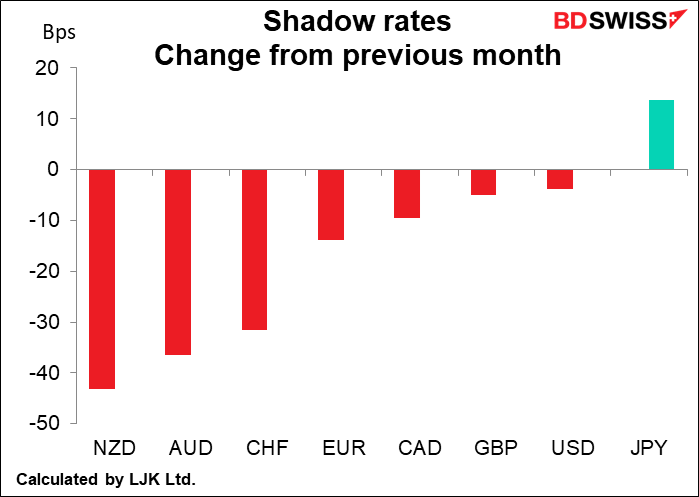 The change in the shadow policy rate, or the overall effect of monetary policy, has explained 44% of the movement in exchange rates over the last month.

I have to say I’m surprised to see CAD adhering so closely to this line when the impact of oil prices has been so great, as we saw above. Meanwhile NZD and AUD were outliers. For AUD it was probably due in part to the expectation of further easing and probably due to the poor performance of stock markets over the month – the “risk-off” mood in the markets would cause AUD to depreciate more than otherwise. NZD’s outperformance on the other hand may be a function of its global outperformance with regards to the virus.

I wrote so much about the election yet again that we’re going to send it out separately later on. I just want to emphasize here what the main points to watch out for are:

The election results should start coming in around 23:30 GMT. Florida starts reporting at 00:00 GMT; that’s a key state if not the key state.

More in the piece that will be coming out shortly.

As for the indicators…can anyone concentrate on them today?

We covered Swiss CPI yesterday and besides, it’s probably out by now anyway.

That means nothing on until US factory orders, which has a pretty high Bloomberg relevance score but I’m not so interested in as it’s largely a function of durable goods orders (durable goods explain 92% of the variation in factory orders), which are already out. Very little new information in this series, is my view.

In any case, they’re expected to show a modest mom rise, one that would be good under normal circumstances – the average for this series over the last 10 years is +0.3% mom, median is +0.1% — but is disappointing in the context of a rebound from a record plunge. It’s clear that the momentum is fading. 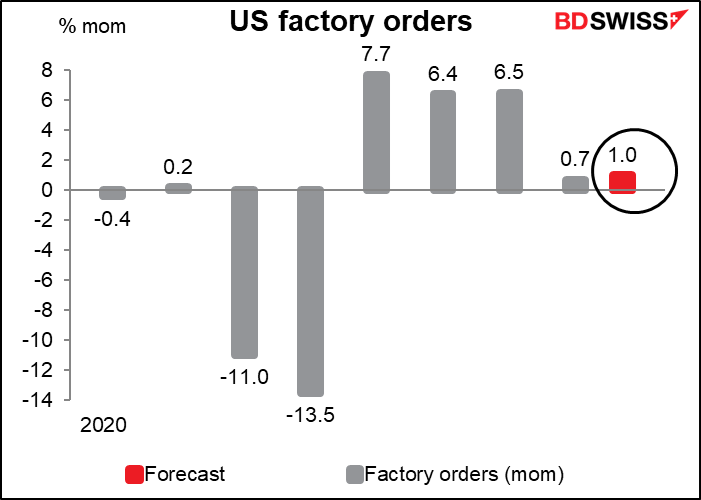 Growth is faltering with orders still 4.3% below pre-pandemic levels. 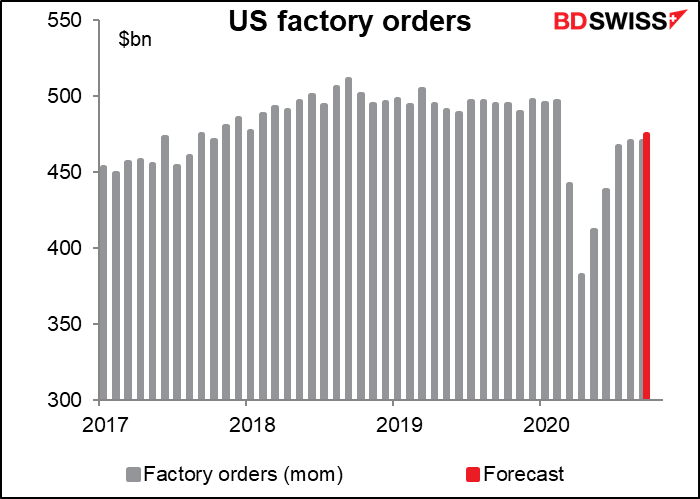 Then nothing major until overnight we get the New Zealand employment data for Q3. Remember that from April last year, the Reserve Bank of New Zealand (RBNZ) has a “dual mandate” of “price stability and support of maximum sustainable employment,”  so this is a key indicator – indeed under current circumstances, probably the key indicator for the country.

What’s odd about this statistic is that the fall in Q3 is expected to be so much worse than in Q2, which was the peak of the NZ lockdown, while restrictions were eased considerably Q3. The difference is the government’s wage subsidy program, which kept a lot of people in jobs during Q2 But as the program faded with the end of the lockdowns in August, a lot of jobs were eliminated.

The fall in employment is bad but not unprecedented; it was worse in the Global Financial Crisis. But the jump in unemployment from 4.0% to 5.3% is quite a sudden leap. This data will probably keep the RBNZ on the path to negative rates. In that respect it may be negative for NZD. 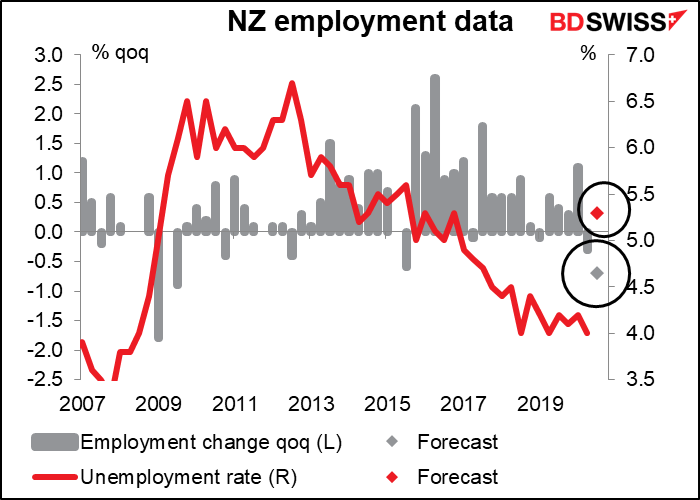 Australian retail sales are no longer a big item now that the Australian Bureau of Statistics (ABS) is producing a preliminary report on them. The preliminary report came out on 21 October and guess what the figure was? No prizes for right guesses. But I like making graphs anyway, because, well, that’s just what I like to do. 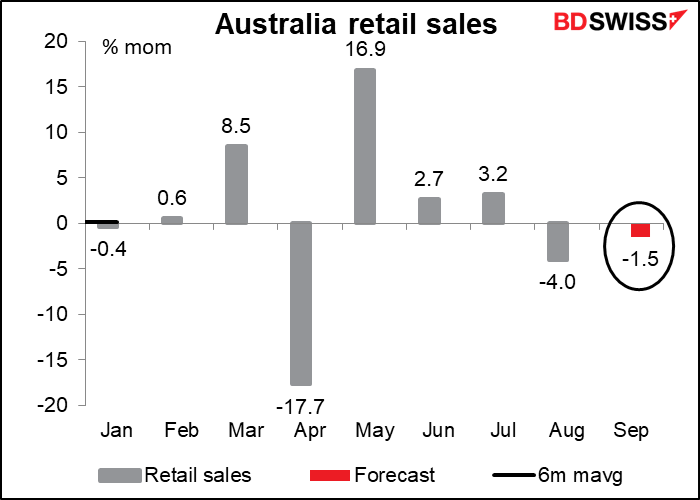 So I’ll also include this graph showing that retail sales are still well above pre-pandemic levels, which is why the fall in sales in September is no big deal. 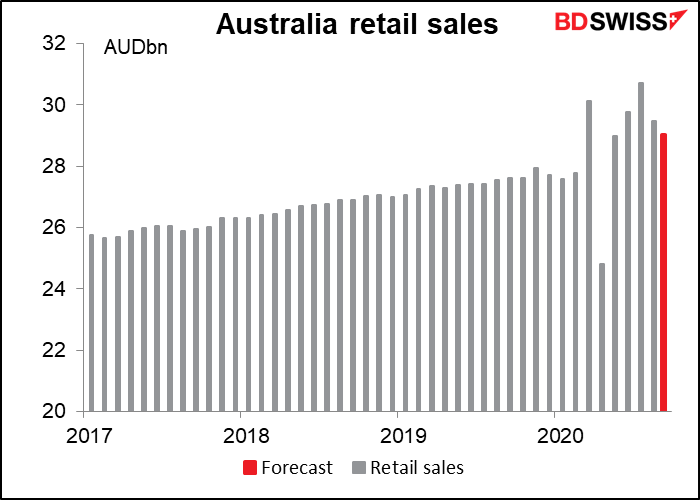 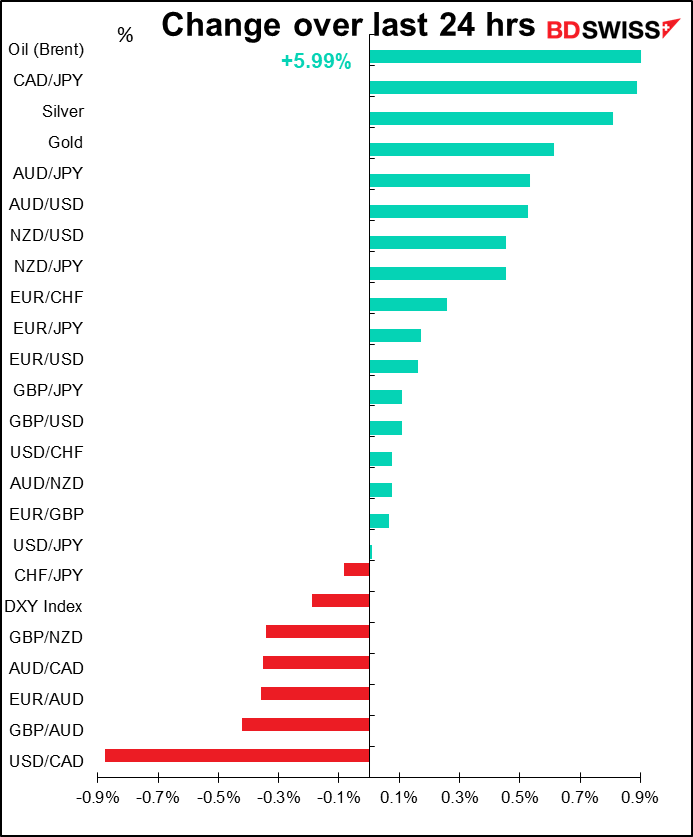