You are at:Home»MARKET PREVIEW»CAD Up on Better-than-Expected Employment Data; Watch for Brexit Developments 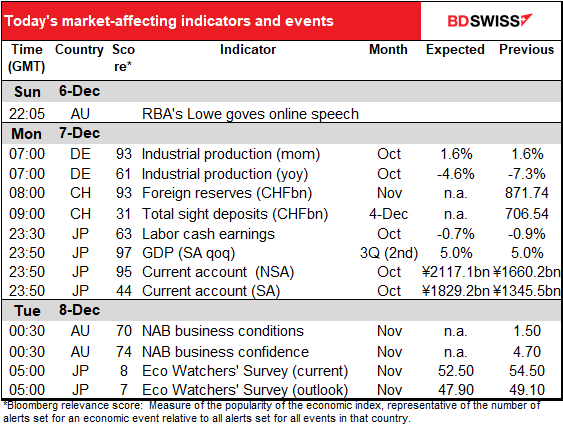 CAD was the clear outperformer since Friday morning on much better-than-expected employment data. The country added 62k more jobs in November, three times the 20k expected, and the unemployment rate fell to 8.5% vs 8.9% expected. The news allowed CAD to shrug off a fall in oil prices. 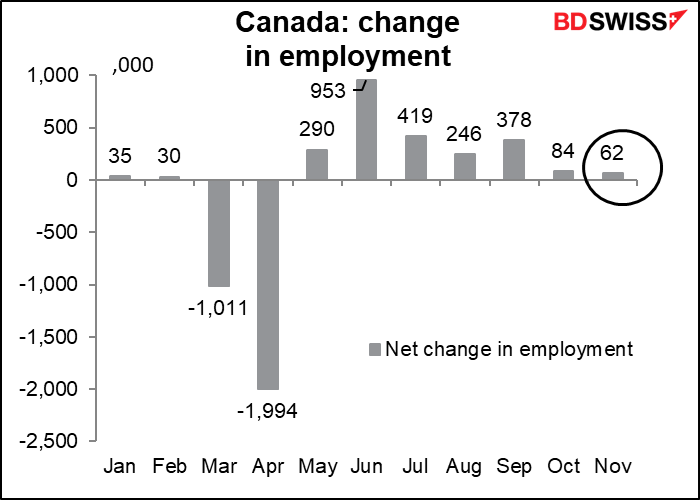 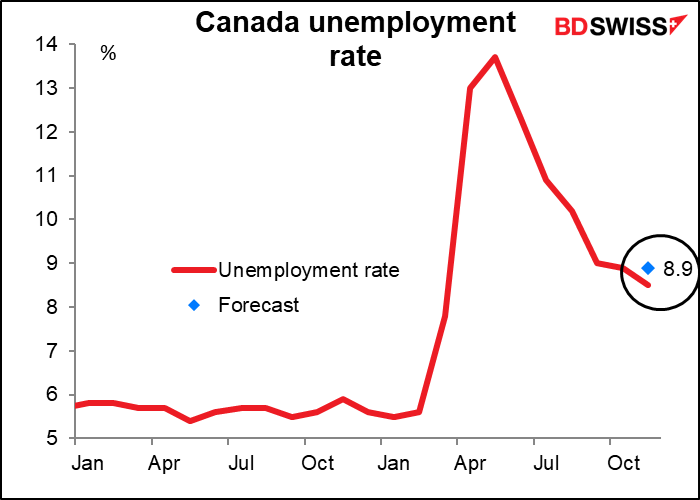 Aside from that, currencies remained in a fairly narrow range.

Lots to watch out for today.

Trump and the despicable Senate Majority Leader McConnell will reportedly come “on board” with a $908bn pandemic relief package that’s being proposed by a bipartisan group. A final version of the bill is expected this week. The bill as currently envisioned extends unemployment benefits and lengthens a moratorium on evictions with aid given to landlords, but there’s no plan to include another $1,200 stimulus check to help the economy. So it’s better than nothing but not as good as something. Nonetheless, passing anything should be good for the “risk-on” mood, which in turn is negative for the dollar.

Watch the vaccine roll-out schedule. The UK is set to start distributing Pfizer Inc.’s vaccine this week, while the US could approve it for emergency use as early as Thursday. This is another potential “risk-on” development.

On the other hand, the US is preparing to sanction at least a dozen more Chinese officials over their role in the recent disqualification of Hong Kong legislators. China views this as interference in its domestic affairs and is likely to go apoplectic. This has the potential to be a “risk-off” influence today.

The big issue today – indeed this week – is of course Brexit. Still no clear view on whether they are closer to an agreement (EU says yes) or not (UK says no). Sunday night was a deadline of sorts because today the UK government’s Internal Market Bill arrives back for a vote in the House of Commons. As originally written, this bill would allow the UK to break parts of the Withdrawal Agreement that Britain has already signed with the EU. The House of Lords removed those perfidious sections, but the government have said they intend to reinstate them back in the Commons on Monday. If they do and if the bill passes, then it’s probably game over for Brexit as the EU would probably pack up and go home. That would be a distinctly GBP-negative event.

Talks will continue today, on the one hand between the two sides’ negotiators – Fox (UK) and Barnier (EU) — and at the same time between PM Johnson and EC President von der Leyen. The fact that they’re still talking is a good sign. Can they work out something to present to Thursday’s EU summit? *Stay tuned!

Forecasts for German industrial production (IP) were revised up sharply after Friday’s German factory orders came in higher than expected (+2.9% mom vs +1.5% expected, 0.5% previous). On Thursday, people forecast today’s IP number to be +0.7% but now it’s expected to be more than double that rate. That would still leave it some 6.7% below pre-pandemic levels, but a continued rise at the highest rate since June could be encouraging and positive for the euro. 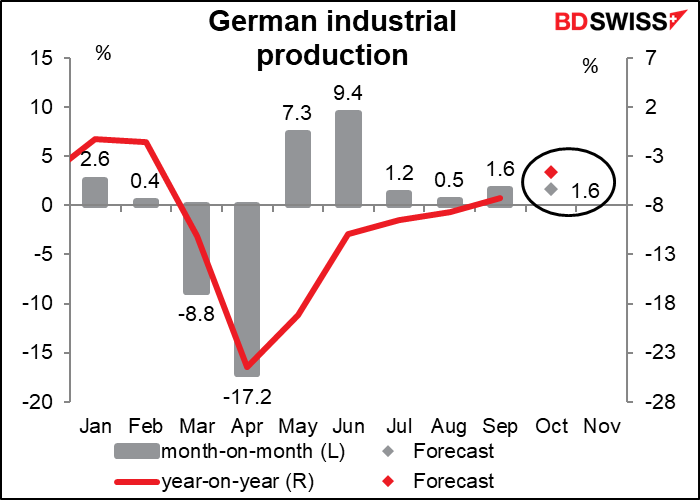 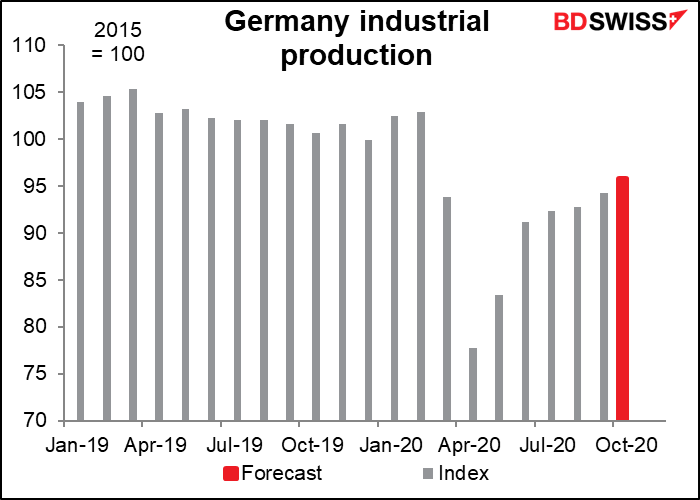 Since the Swiss sight deposits and Swiss foreign currency reserves both come out today, I thought it would be fun & exciting to look at what the connection between the two series is. We watch the sight deposits every week (well, some of us do – others have better things to do, I’m sure) to judge how much the Swiss National Bank is intervening. But are they really a good indicator?

The answer is, they’re OK, but not perfect.

The two figures are not equal. If the gap between them were constant, it would be a simple matter to predict one from the other. But the gap is not constant. The size of the gap has generally increased as the amount of the reserves has increased, although recently it’s declined. 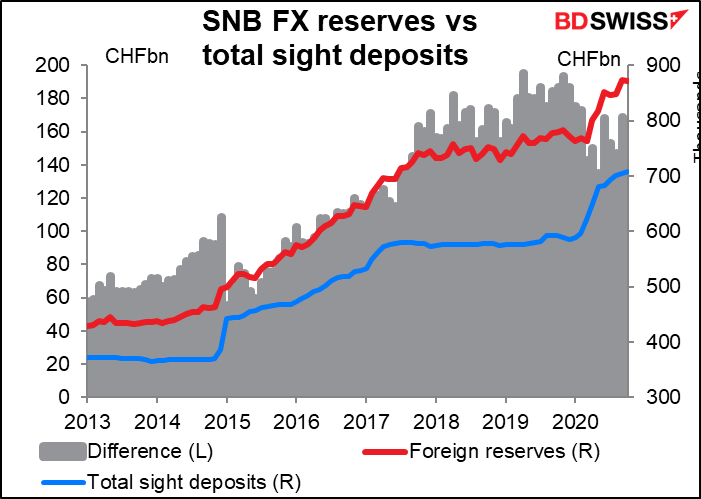 Nor is the gap constant as a percent of reserves (or deposits, for that matter). The key point though is that the variation in percent difference from month-to-month is usually minor. That fairly stable relationship is what enables us to get an idea of intervention from the sight deposit figures, although sometimes – Q1 and Q2 this year, for example – the relationship does change suddenly and the figures become less accurate. (The gap was 24.2% in December 2019 but fell to 16.5% by May 2020.) 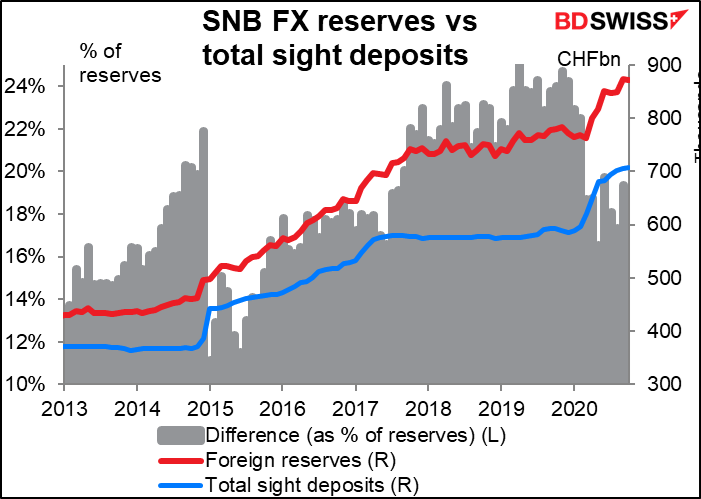 So what should we look at to judge the SNB’s intervention? Contrary to popular belief, the sight deposit data is probably more reliable than the FX reserve figures for gauging intervention. We know that because the SNB has started releasing data on its intervention. We now have the figures for Q1 and Q2 of this year. Comparing those figures with the data on reserves and deposits, it’s notable that the value of the country’s FX reserves in CHF fell in Q2 even though the SNB was actively intervening. That shows that the reserves data are affected by valuation changes on the stock of reserves that can outweigh any changes in the flow of reserves. The sight deposit figures though are all in CHF and therefore aren’t affected by this problem. 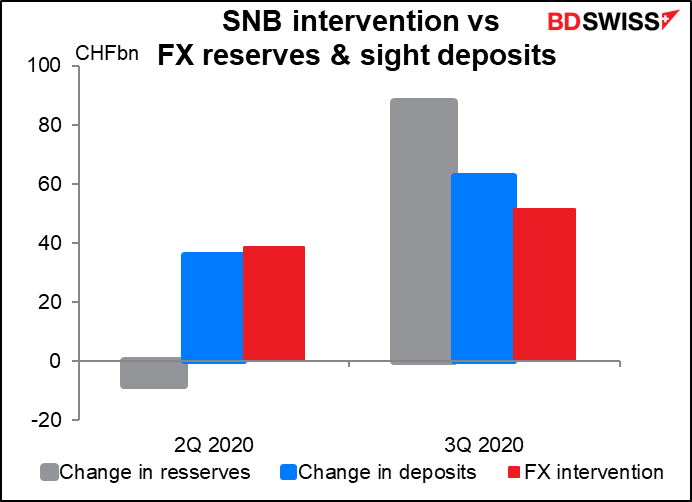 The composition of the SNB’s reserves changes every month. In Q1 for example the SNB sold GBP and CAD. These changes can have an impact on the value of Switzerland’s reserves regardless of the intervention on top of valuation changes caused by normal fluctuations in the FX market. 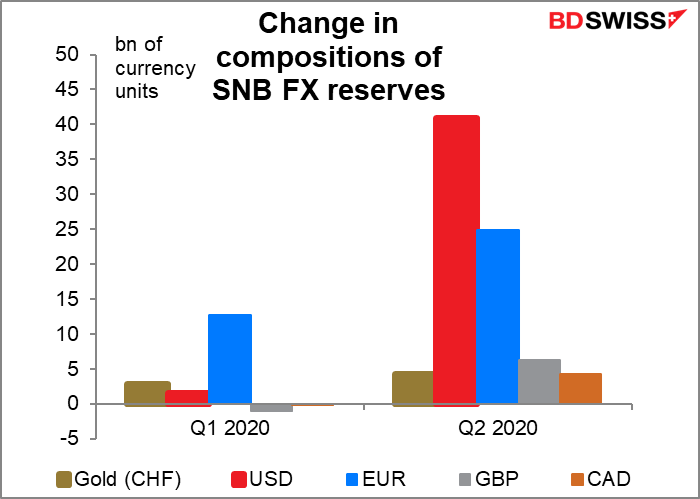 After that, there’s precious little on the schedule until the Asian day starts up.

Japan announces the second preliminary estimate of Q3 GDP. No one knows how it’s going to turn out because this quarter will involve the benchmark revisions that are conducted once every five years. In any case, people are more worried about Q4 GDP than Q3 so I doubt if it will have much of an impact anyway. Japan labor cash earnings isn’t market-affecting, but I like to follow it anyway, because someday my daughter will enter the workforce in Japan and I hope she makes enough money to support me in my retirement. 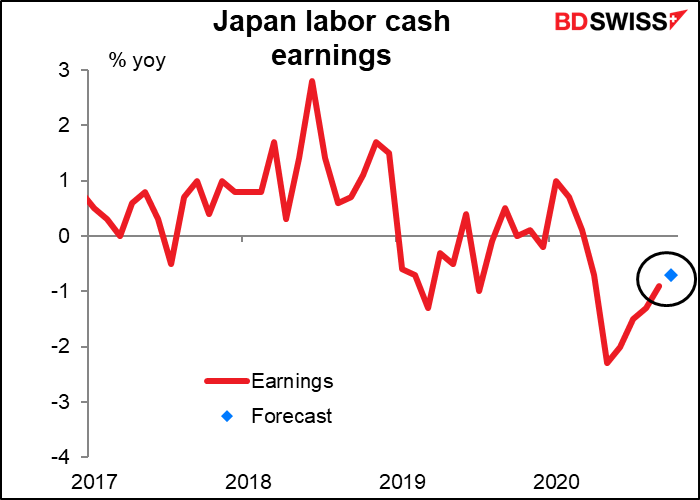 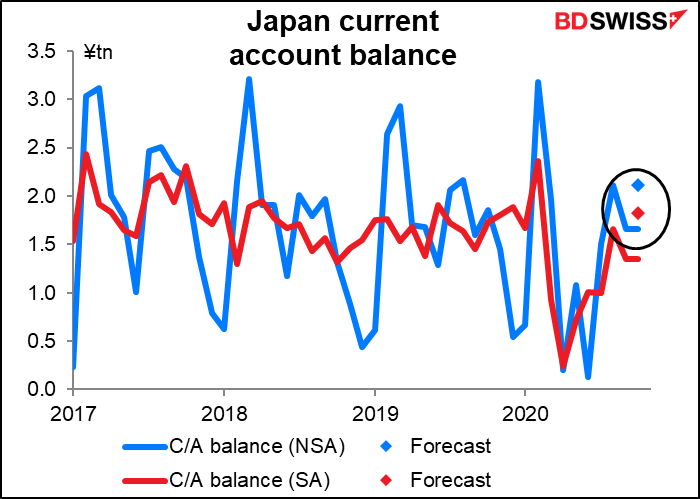 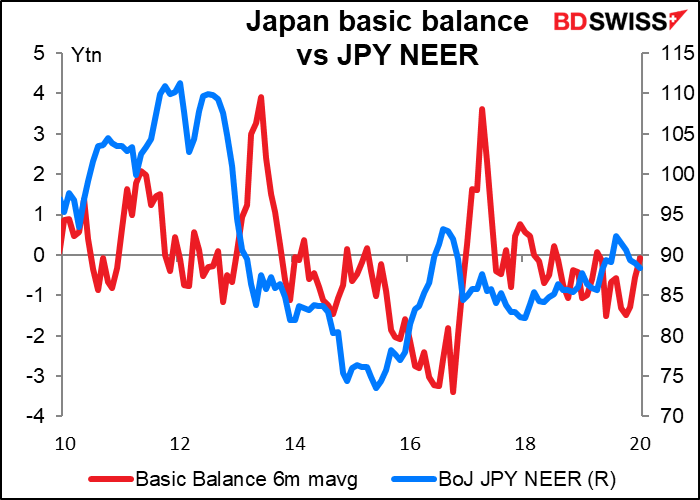 No forecasts for the National Australia Bank (NAB) business condition indicators, but they do sometimes affect the market, so I’m including a graph of them at no extra cost! 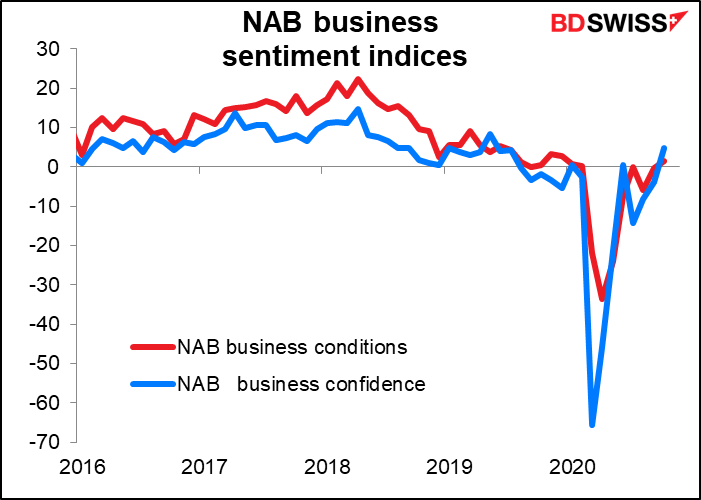 Ditto for the Japan Eco Watcher’s Survey, which has to have about the lowest Bloomberg relevance score of any indicator I’ve ever seen. But with a lot of attention focused on the service sector nowadays, I think this is a more important indicator than it usually is. The current conditions index is expected to fall but to remain above the crucial 50 line. Expectations however are forecast to sink into “pessimistic” territory, no doubt because of the worsening virus situation in Japan. 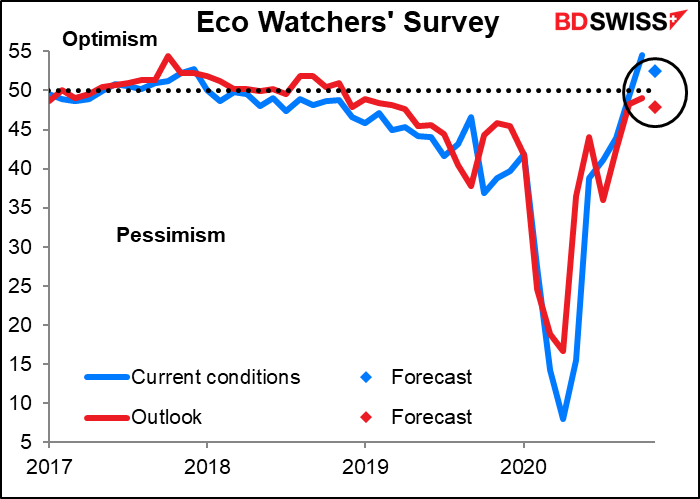 Of course, “worsening” is relative to what it was in the past. Japan has been relatively unscathed by the virus considering its size. In recent weeks North and South Dakota, two rural states in the US (total population: 1.65mn) had more cases than Japan (126.5mn). Not “relative to population,” but in absolute numbers. 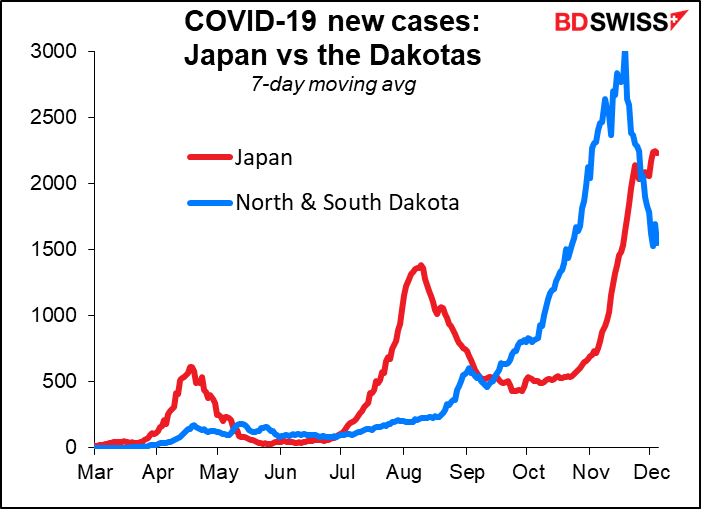 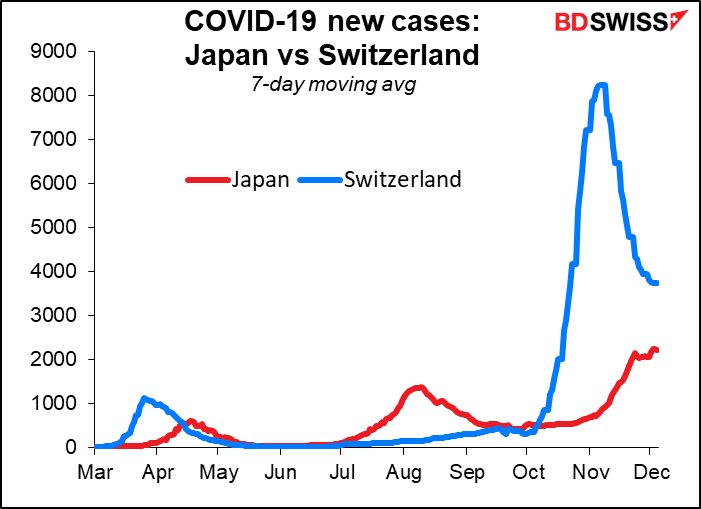 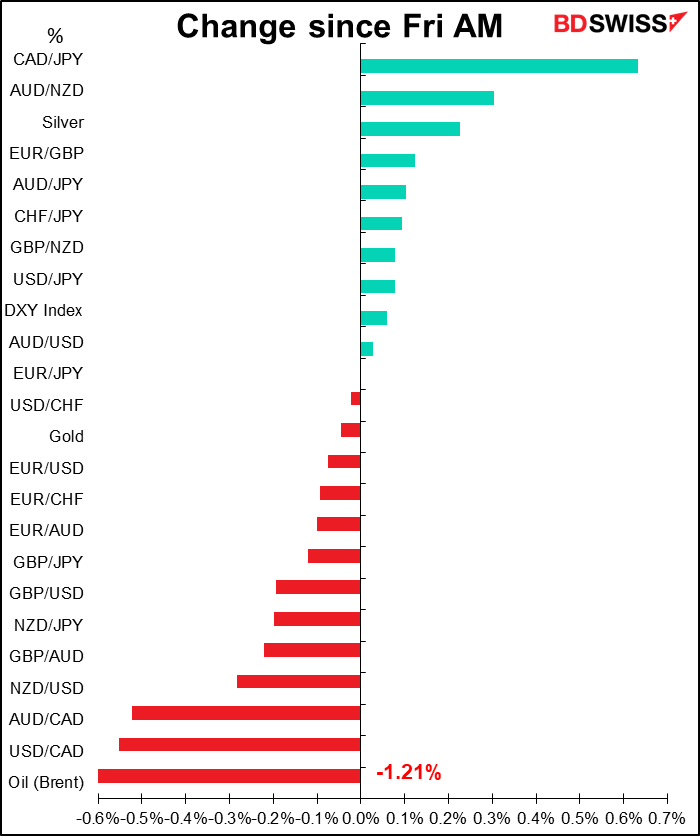