You are at:Home»MARKET PREVIEW»CAD Up as Oil Prices firm; US Nonfarm Payrolls 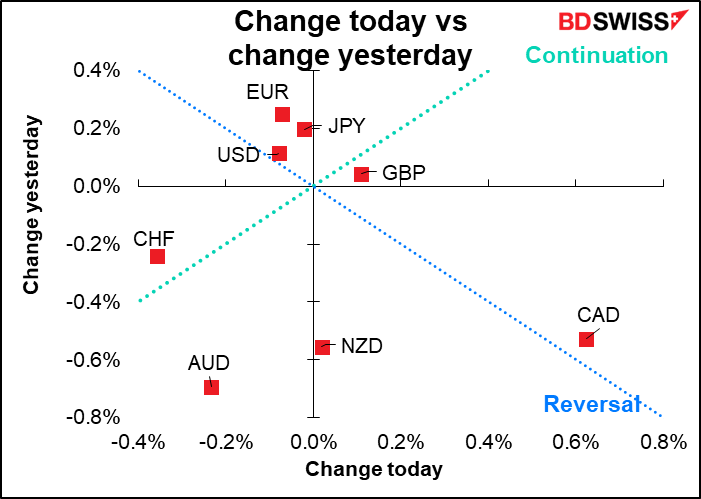 CAD was the big stand-out today and for obvious reasons, as shown by the usual graph of USD/CAD vs the benchmark US crude oil, West Texas Intermediate (WTI), inverted:

So the next question is, why was oil up some 3.6% on the day? Nothing economic here, rather it’s problems in several major oil-producing countries. Kazakhstan’s biggest oil producer has had to adjust its output following protests in the country, while Libyan production has also been hit by problems they’re having. These issues suggest that OPEC+ may have trouble meeting their scheduled increase in output of 400k barrels a day (b/d) in February. (OPEC rules say that other countries aren’t allowed to make up the difference if one country can’t meet its scheduled quota increase.)

To make matters worse, a deep freeze in Canada and the northern US has disrupted oil flows. That’s coincided with shrinking inventories of crude oil in the US.

Demonstrating the renewed tightness in the market, the prompt time-spread, the difference between the nearest futures contract and the second-nearest, continued to widen. That shows buyers are willing to pay a premium to get their hands on oil ASAP. 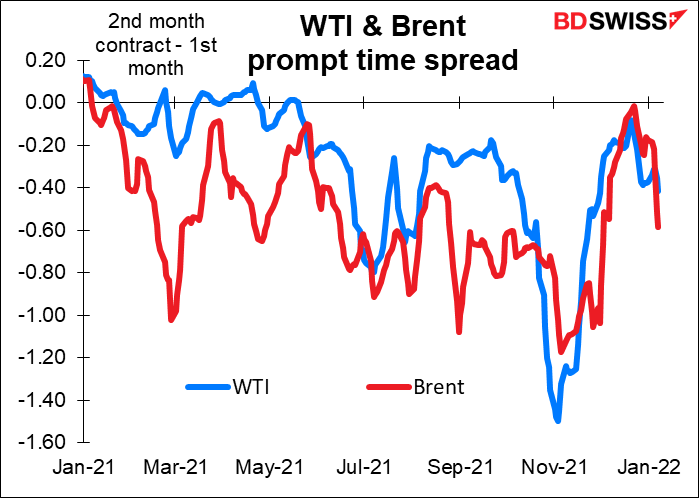 Elsewhere, stock markets stabilized yesterday but didn’t bounce back (S&P 500 -0.10%, NASDAQ -0.13%) although this morning in Asia several markets are up more than 1% (Hang Seng +1.7%, KOSPI +1.2%, Australia +1.3%).  But bond yields continued to move higher as the market more and more anticipates that the Fed will start hiking in March. 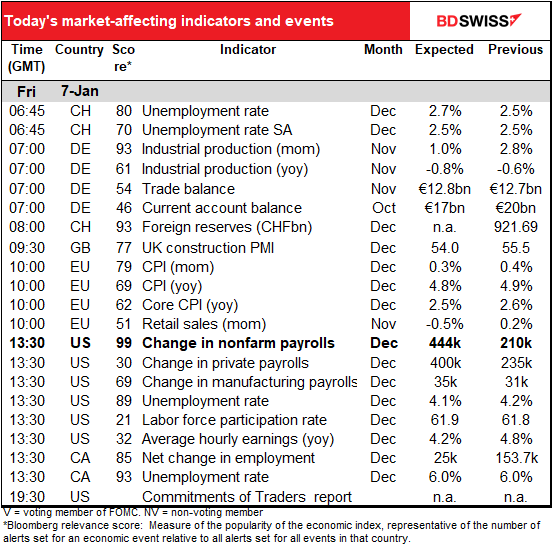 The day has already begun with Swiss unemployment, German industrial production and trade, and Swiss foreign reserves. That’s a lot to digest before breakfast!

We then wait for the EU-wide consumer price index (CPI). Yesterday’s German CPI was slightly higher than expected at 5.7% yoy vs 5.6% expected, but still declined from last month’s 6.0% yoy. Today’s EU-wide CPI is expected to be slightly lower than last month’s, too. That might add some weight to the argument of the doves on the European Central Bank’s Governing Council who want to hold off from normalizing policy any time soon. That would be negative for EUR. Then it’s the moment you’ve all been waiting for: the awe-inspiring US nonfarm payrolls. The market is looking for an increase of 444k (range: 150k-850k). This has been revised up from earlier estimates of around 420k after Wednesday’s ADP report came out much stronger than expected — +807k vs +410k expected. That’s also probably why the “whisper” figure – the estimate given by random people with access to a Bloomberg terminal – is an even higher 479k. Of course as I conclusively demonstrated on Wednesday there’s no connection whatsoever between the ADP and the NFP figures, but people are hardwired to see relationships even when there aren’t any.

In any event, the fact that it’s been revised up suggests that the market is primed for a good figure and the market reaction to a miss is likely to be greater than that to a beat. Private payrolls are expected to be up 400k and government payrolls 44k. 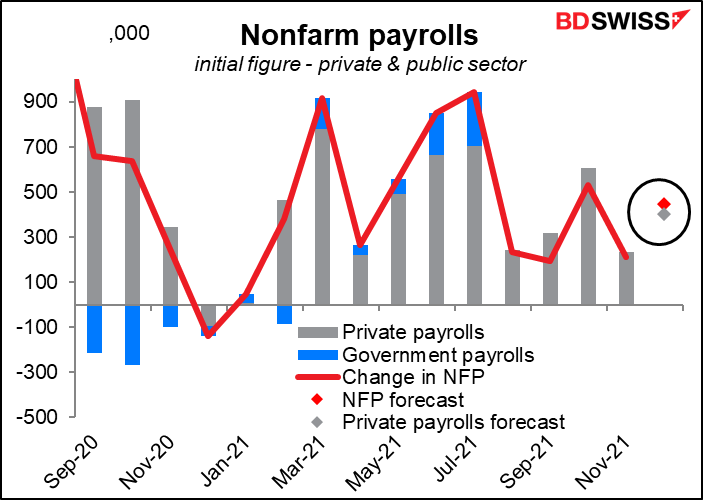 Meanwhile, the unemployment rate is expected to fall one tick even while the participation rate ticks up. Meanwhile, average earnings growth is expected to slow slightly. I think this would be disappointing for the Fed, for two reasons. 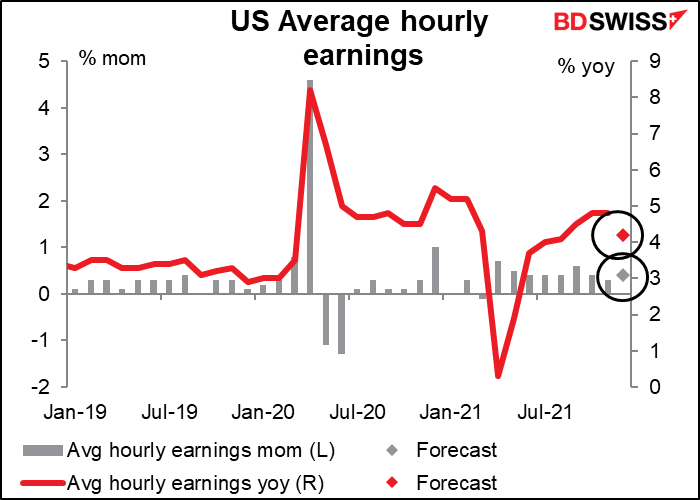 Meanwhile, in contrast to the decent US employment data that the market expects, Canada’s employment data is expected to be pretty lackluster. Employment is forecast to grow only a bit… 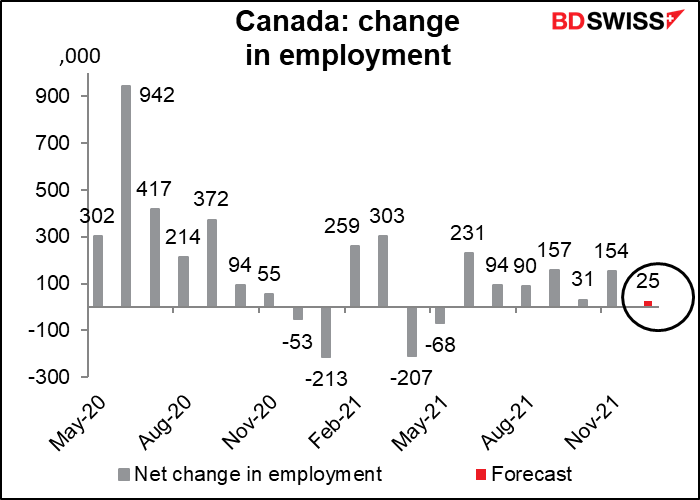 …while the unemployment rate is forecast to remain the same. 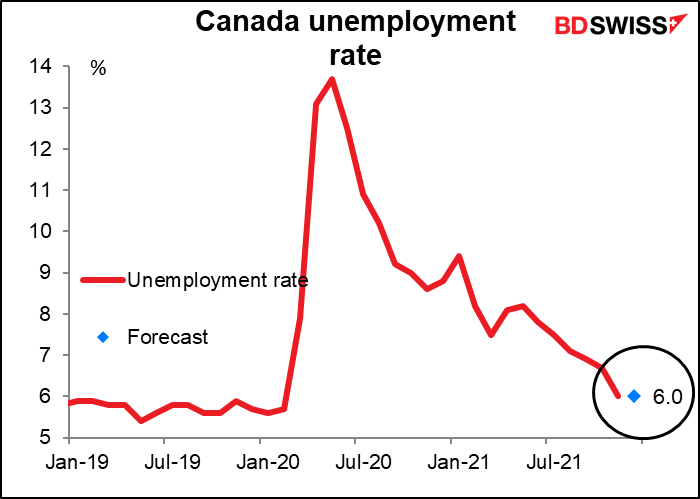 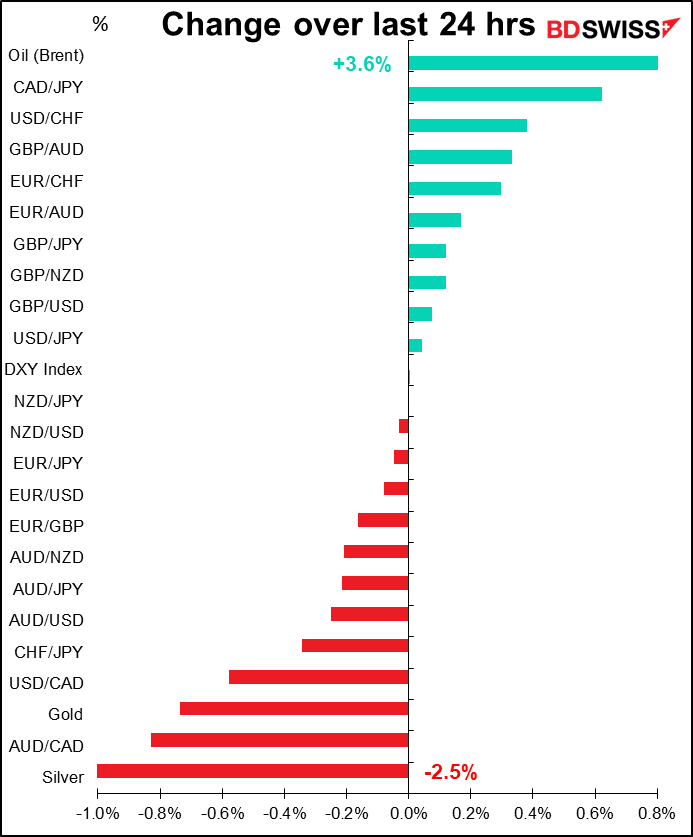