You are at:Home»MARKET PREVIEW»CAD and EUR up, USD down in “risk-on” mood; Beige book, US presidential debate 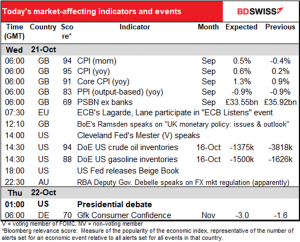 Isn’t that remarkable? Some 25mn people collecting unemployment insurance and Trump is favored for his handling of the economy. Astonishing.

I would also refer interested readers to a New Yorker story, Trump’s Labor Secretary Is a Wrecking Ball Aimed at Workers. (which you can’t read without a subscription, but the headline tells you all you need to know, really.)

Trump’s success with the working class in the face of all this shows to me how facts mean nothing and perception, or spin, is everything. Many working-class people were convinced by Trump’s promises in 2016 to restore their previous prosperity and voted for him then. Many still support him even though reality has proved so different.

I can’t believe we’re still going back and forth about the US stimulus package. This is getting to be like the Brexit talks. House Speaker Pelosi said Tuesday was the deadline but asked about the possibility of reaching some agreement this week, she said, “That’s the plan. That’s what I would hope.” She said the bill would be “bigger, better, and retroactive.” The White House says they’re “working hard” on it too. Last I heard, the administration’s offer has increased to $1.88tn, while Pelosi wants $2.2tn. Trump says he’s willing to go even higher. Pelosi’s spokesman, Drew Hammill, said the negotiators are moving closer to an agreement and “both sides are serious about finding a compromise.”

But there are three sides to the negotiations, not two, and no one seems to have asked the third side, Senate Majority Leader McConnell Y.S., whose limit seems to be around $500bn. McConnell said the Senate would take up a comprehensive coronavirus stimulus package “at some point” (i.e., not necessarily before the election) if Pelosi and Mnuchin can reach agreement and get a bill through the House of Representatives. But he didn’t say whether he would support such a deal or encourage the Republicans to back it. Many Republican senators would balk even at $1.8tn, and the Republicans have a rule that they don’t pass bills that need Democratic support to pass – that is, if it can’t pass just with Republican support, they generally won’t even bring it up for a vote.

There are two problems for McConnell: 1) the Senate is busy ramming through the Supreme Court nomination of someone slightly to the right of Atilla the Hun and he doesn’t want anything to distract from that, and 2) he’s worried about a backlash from voters: the Republican base may be angry if they pass a huge bill, because the “undeserving poor” might get some money (instead of deserving millionaires), while the Democrats will use it to rile u their base if the Republicans vote against it. I still doubt whether anything will get done on this before the election.

But no one seems to agree with me, so maybe you should ignore me too. Stocks were higher and the US Treasury yield curve continued to bear steepen, i.e. long-term rates rose faster than short-term rates, an indication that people think higher inflation or faster economic activity (and therefore demand for borrowing) is likely in the future. 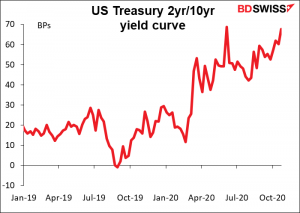 Or perhaps people are just pricing in the eventuality of a package, if not sooner, then later. I agree that if the Democrats take the Senate, which seems increasingly likely, there’s a good chance a bill will be passed by early January (the new Senate would take its seats on 3 January, a few weeks before the president is inaugurated on 20 January). That is, unless Trump decides he’s not going to pass anything that he won’t get credit for, in which case it would have to wait until Biden takes office on 20 January (inshallah).

Either way, the “risk-on” mood had the usual impact on the FX market, with EUR and the commodity currencies higher, and USD lower. JPY and CHF seem to have been on the sidelines.

One question is whether the firmer EUR was simply the counterpart to a weaker USD or whether it represents some strength in EUR in itself. I think the latter. The recent commentary from European Central Bank (ECB) officials has been a bit less dovish than before, which has reduced expectations for further easing at next week’s ECB meeting. Probably the Governing Council will prefer to wait until December, when they get a new set of forecasts, before making any decision.

And what are they likely to decide? An ECB research paper published yesterday (Does a big bazooka matter? Quantitative easing policies and exchange rates) estimated that 6% of the 10% EUR/USD rally this year was due to differences in the volume of quantitative easing (QE), or bond purchases, by the Fed vs the ECB. The article also said QE has a large and persistent impact on the exchange rate. That suggests if the ECB does ease further, they’re likely to focus on more QE purchases than on cutting already-negative rates further. 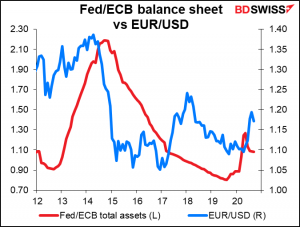 But with EUR/USD now above 1.18, we’ll have to see if we start to get pushback from ECB members about the potential impact of a higher exchange rate on inflation.

I still can’t find any specific reason why CAD is taking the lead now. It must be monetary policy divergence: the Reserve Bank of Australia (RBA) and Reserve Bank of New Zealand (RBNZ) are both talking about taking further steps to loosen monetary policy, including negative interest, rates, while the Bank of Canada has ruled out negative rates and is already reining in its quantitative easing measures. (Also today it probably didn’t hurt that oil was up, too.)

GBP drifted lower with no big developments in the Brexit negotiation stalemate. The government suffered a defeat in the House of Lords on the Internal Market Bill. Although the bill passed, members voted by 395-169 in favor of a “regret” amendment regretting that part of the bill “contains provisions which, if enacted, would undermine the rule of law and damage the reputation of the United Kingdom.” This was the biggest defeat for a government bill in the Lords since 1999, and it included 39 Conservative peers voting for the amendment. According to The Independent newspaper, the defeat is essentially symbolic and doesn’t by itself overturn any of the provisions in the legislation. However, it signals to the government that there is almost no chance of the bill getting through its remaining stages in the Lords without significant changes. That may provide Johnson with the political cover he needs to remove the offending clauses and reach an agreement with the EU. The motion should therefore be seen as GBP-positive, in my view.

The previous debate helped Biden, because many people were offended by Trump’s rudeness and refusal to let Biden speak (Trump interrupted Biden some 140 times during the debate). Let’s see if Trump’s learned anything from experience. Hah! A further increase in Biden’s support would probably be both “risk-on” and good for the dollar.

As for the indicators, the UK CPI and public sector borrowing are already out. Headline inflation was a bit slower than expected, but core was exactly in line with expectations. 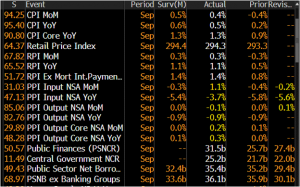 That leaves us with a bunch of speeches. Cleveland Fed President Mester suggested recently that extending the duration of the Fed’s bond purchases could be one way to loosen policy further if the economy underperforms. We’ll be looking to see if she expands on those thoughts after no doubt having heard from her colleagues about the idea.

The Fed releases the Beige Book this evening. In the last one (2 September), they said that “While the overall outlook among contacts was modestly optimistic, a few Districts noted some pessimism. Continued uncertainty and volatility related to the pandemic, and its negative effect on consumer and business activity, was a theme echoed across the country.” 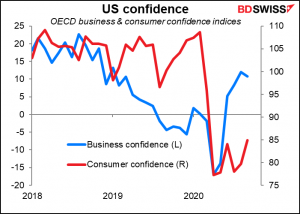 Speaking of confidence, early Thursday, Gfk – which stands for “Gesellschaft für Konsumforschung” or “Society for Consumer Research” but now presents itself as “Growth from Knowledge” – announces the German consumer confidence index. It’s expected to fall a bit, which wouldn’t surprise me at all, given the recrudescence (word of the month!) of the virus in Europe. 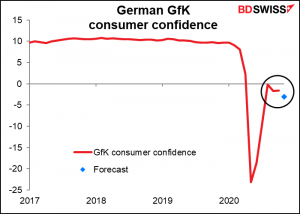 I’m sure confidence throughout Europe is flagging, although Germany has more reason to be confident than many other countries do – it’s doing much better now than it was in the first wave. (Germany accounts for 24.3% of the Eurozone population but only 8.6% of the virus cases, vs around 21% back in early April and 27% at the peak in late June, although that was when cases were at their lowest.) 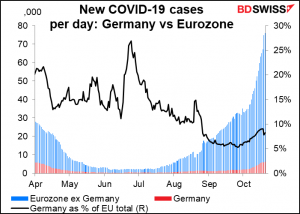 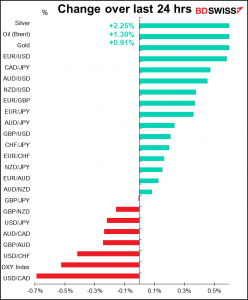