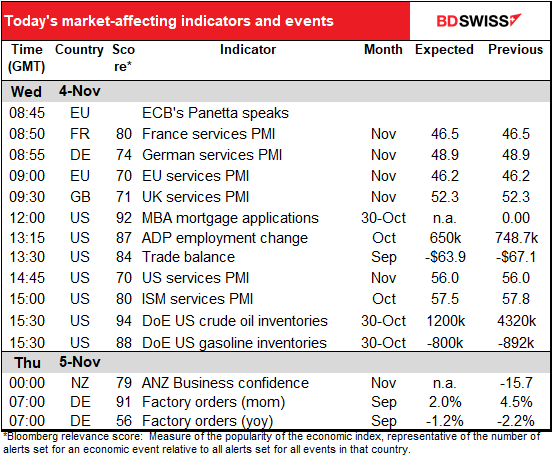 No certain result yet. Everyone’s been saying for some time that we wouldn’t know the results right away and warning of a “red mirage” followed by a “blue shift.” However when we see it play out in real life, it’s nerve-wracking.

Once again, the polls have been off tremendously. Trump and other Republicans have much more support than the polls had indicated.Trump apparently won both Florida and Texas, the former by a bigger margin than in 2016! Winning them doesn’t guarantee he wins the election, but it does mean that it’s not the “blue wave” that many people were predicting/expecting/hoping for (like me, I admit).

The race isn’t over by any means. Statistician Nate Silver, who runs the fivethirtyeight.com website, noted that “If Trump wins Florida, North Carolina and Ohio, but Biden wins Arizona, Biden is an 85 percent favorite in our scenario generator. There’s a 6 percent chance of an Electoral College tie, though.” A tie would be astonishing. In that case, the House elects the President and the Senate elects the VP. We could have Biden as President and Trump as VP…

For Biden to win now, he has to take Michigan and Wisconsin. In that case, he can lose Pennsylvania and still win. The result for Michigan won’t be known until Friday. Pennsylvania will also take several days.

Note that Fox has called Arizona for Biden, but other analysts haven’t.

With the race coming down to the mail-in votes in several of the Midwest states, the odds are that Trump claims victory (which he did) and tries to stop the vote count while he’s ahead. I expect to see legal action along those lines over the next several days. The Democrats are ready:  they’ve gamed out all the possibilities and have an army of lawyers ready to fight. Note that VP Biden also made a speech asserting that he was on the path to victory – that’s an attempt to stop Trump from asserting (falsely) that he’s won so that later he can claim any change is due to  “fraud” or “cheating.”

At the same time, we have to look at the Senate races too. Those are just as important as the presidency if not more, in my view. That’s not looking so great for the Democrats. Even if Biden is elected president, he is now more likely to face a Senate that is either Republican-controlled or has only a slim Democratic majority, with moderates as pivotal votes.

According to the betting market Predictit.org, a Democratic “clean sweep” is highly unlikely. Reflecting this new reality, S&P 500 futures, which were up sharply earlier in the Asian day, have come down a lot. They’re still up 0.2% but fading fast. Meanwhile, the changes reflected in my tables no longer reflect the rates in FX the market. In the 2 1/2 hours since I ran the spreadsheet, AUD/USD has fallen 0.62%, NZD/USD down 0.45%, and EUR/USD down by 0.27%. USD/JPY is virtually unchanged. In other words, the dollar is strengthening in what looks like a “risk-off, safe-haven’ reaction. 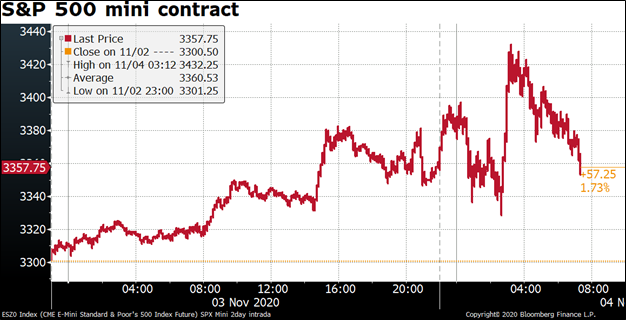 What I called a “blue tide,” in which the Democrats get the White House and increase their seats in the House but lose the Senate, seems possible. That’s my worst-case scenario. It means a Senate determined to inflict as much pain as possible on the US economy to ensure that the Republicans get back into power at the next election. It’s also highly negative for the dollar, because with the Senate refusing to countenance any more fiscal stimulus, the burden of supporting the economy will fall on the Fed, which means interest rates are likely to be lower for longer than would otherwise be the case.

On second thought, I shouldn’t say that would be the worst-case. Four more years of our current situation – a Trump presidency with a split Congress – would  probably be worse, IMHO.

I don’t know if people realize just how undemocratic the Senate is. The Republicans currently have a 53-47 majority, yet they represent 14mn fewer people than the Democrats. That means they represent about 46% of the population vs 54% for the Democrats. Yet they control Presidential appointments, which has allowed them to pack three of the nine judges onto the Supreme Court during Trump’s term. Those are lifetime appointments that will continue to erode people’s rights for decades to come.

If you want to keep track, here’s an updated map of the election results. Or you can go to Edison Research, which has a whole page of links to websites where you can get up-to-date information.

Meanwhile, the election has elicited a lot of soul-searching among Americans. One of the best comments I saw on Twitter this morning came from my friend Quentin Hardy at Google, who said: “Whatever side we’re on, I think we can all agree that we don’t understand America.”

How Trump can have such strong support despite over 200k deaths and massive unemployment, despite the crimes, graft, nepotism, racism, misogyny, and just plain nastiness…it’s inexplicable to me. Like someone else said, “the level of Trump votes raises deep questions about race, integrity, and moral fiber in America.” Or “Regardless of the final result, it’s clear that America is not even close to being America yet.”

Or the simplest of all: “He spent 4 years golfing. And people are still voting for him. I will never understand it,” said the comedian Sarah Cooper.

Two small points:  1) the person I favored in my home district lost to the appalling “Gym” Jordan, which makes me glad I left there many years ago (although I’m sure my hometown voted against him); and 2) the state of Oregon passed Measure 110, making it the first state to decriminalize possession of all drugs, including heroin and cocaine.

Assuming that there’s some interest in the indicators, which may be a false assumption, but anyway, I’ll limit myself to the major ones coming out today and skip the weeklies.

The final service-sector purchasing managers’ indices (PMIs) are first out, together with later in the day the Institute of Supply Management (ISM) non-manufacturing PMI. The manufacturing PMIs were all revised up a bit and the ISM manufacturing PMI was a blow-out 59.3 (vs 56.0 expected, 55.4 previous). Perhaps we’ll get some improvement in the service-sector PMIs, too, although the ISM index is expected to fall slightly (but remain above the Markit version and in any case well in expansionary territory). Automated Data Processing Inc. (ADP) reports its monthly estimate of the US nonfarm payrolls. ADP is an outsourcing company that handles about one-fifth of the private payrolls in the US, so its client base is a pretty sizeable sample of the US labor market as a whole. One point to note:  it adjusts the figures to match them to the final estimate of the nonfarm payolls (NFP), not the initial estimate. So while they are one of the best guides to the NFP that we have, they aren’t perfect by any means – in fact, neither is the NFP figure itself, since it’s always revised.

The market guesstimate for the ADP report this month is +650k, which is pretty similar to last month’s guesstimate (+630k). These are not great figures, considering that there are some 23mn people collecting unemployment insurance in the US. At this pace it will take the US some 32 months = five years to get back to the pre-pandemic level. I would say that this slowdown in hiring should be negative for risk, hence positive for USD. 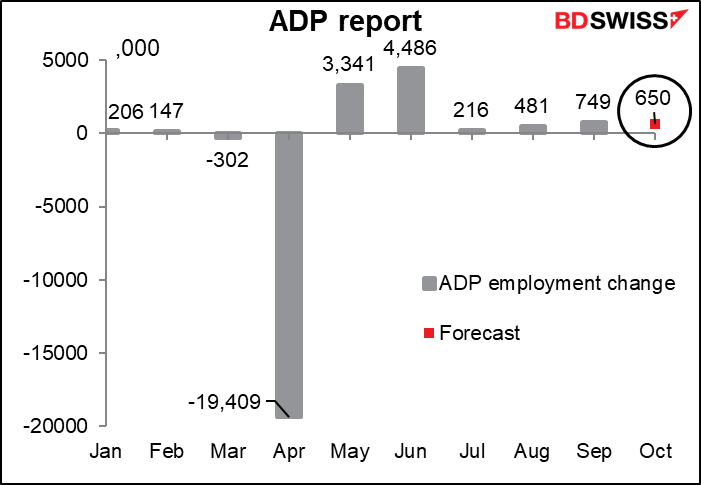 So that’s it until tomorrow, when the world has to face the German factory orders. As the level of orders gets back to normal, the monthly variation is also getting back into normal range. 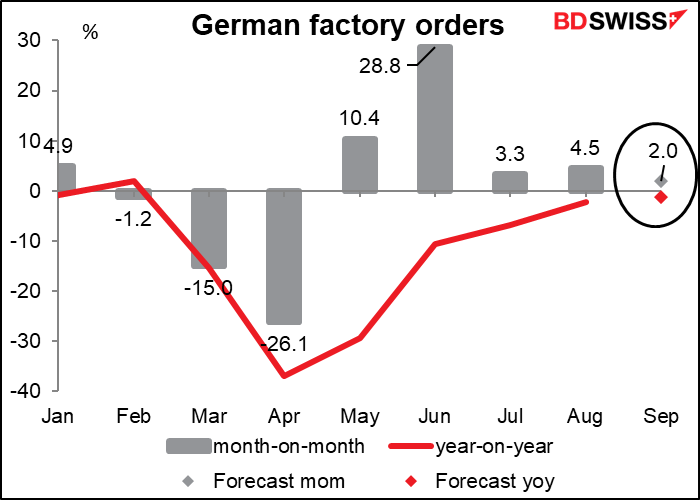 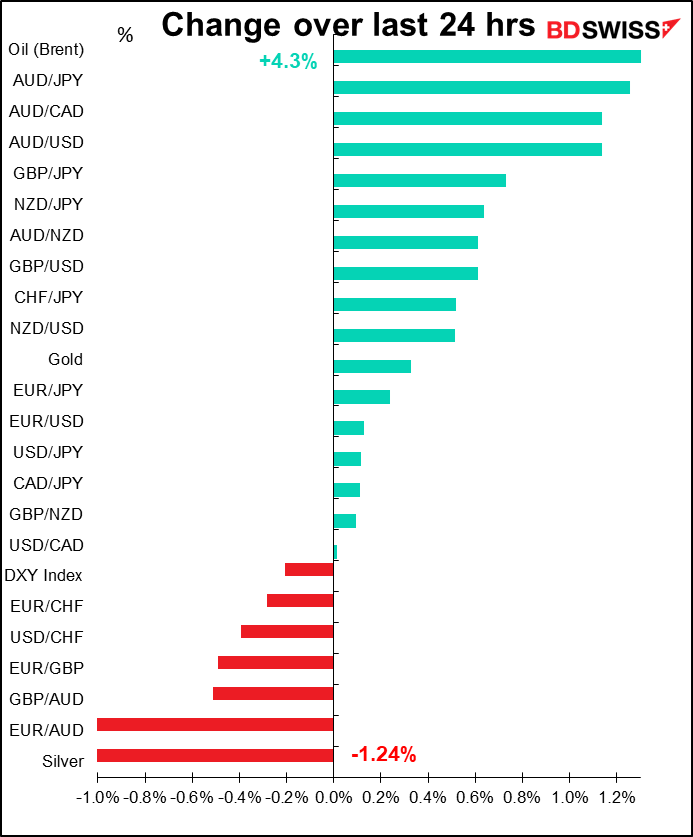 BDSwiss finance Forex fxnews US US elections USD
Share. Twitter Facebook Google+ Pinterest LinkedIn Tumblr Email
Previous ArticleToday’s US Election: A Guide to what’s important and what to Watch
Next Article Bank of England: Raising the Ceiling for Asset Purchases