Volatility is back! US stocks were down sharply, with the NASDAQ off 4.1% and S&P 500 down 2.8%. All Asian markets are down this morning. Is it any surprise that the safe-haven JPY is up and the commodity currencies down? And it looks like the comments about the death of USD were premature – when the going gets tough, investors buy dollars.

CAD was the worst-performing commodity currency as oil prices sank over 6% to settle below $40/bbl for the first time since June. Demand has stopped growing, the US summer driving season is over, and increased supply from OPEC+ are pressuring oil prices. We have a Bank of Canada meeting later today, but oil prices may be more important for USD/CAD than the Bank, which is likely to remain on hold.

Once again NZD showed a bit higher beta to the stock market than AUD did; that is, it fell more in response to a given decline in stocks than AUD did. That may be because the prospects of a weaker global economy make it more likely that the Reserve Bank of New Zealand may resort to negative interest rates. I suspect NZD will have a higher beta on the downside and AUD a higher beta on the upside as demand for Australia’s commodity exports increases more in response to global economic conditions than New Zealand’s exports do.

GBP was the worst-performing currency as a UK government official admitted that its plan to reinterpret the special Brexit arrangements for Northern Ireland will break international law. As MPs listened in slack-jaw astonishment, Northern Ireland secretary Brandon Lewis told Commons, “Yes, this does break international law in a very specific and limited way. We’re taking the powers to disapply the EU law concept of direct effect … in a certain very tightly defined circumstance.” I’m sure it will be extremely reassuring to every country that might sign an agreement with Britain to know that the country will only break the agreement “in a very specific and limited way.” I hadn’t thought the Brexit debacle could get worse, but it seems it can. I’m still bearish GBP.

As for the stock markets, part of the rout overnight was attributable to news that AstraZeneca Plc has halted tests of its virus vaccine amidst concerns about an unexplained illness in one patient. But that can’t explain everything. First off, the pause was just due to caution about one unexplained illness – it doesn’t mean the vaccine has failed. (By the way, if you’re interested in reading about how the search for a vaccine is going, the medical website STAT has a major roundup here.)

A lot of the rout seems to be concern about overvaluation in the tech sector. For example, concern about a vaccine doesn’t explain a 22% drop in the price of Tesla stock in one day (now down 34% from its peak about a week ago). Nor does it explain why lumber futures are limit down for the seventh day in a row.

When I see market action like this, I think back to the two days early in my career that made the deepest impressions on me as a market-watcher.On 3 Jan. 1980, the Paris Bourse suspended gold trading for the first time in its history because of an order imbalance – buyers only. The next day it also had to suspend trading because of an order imbalance – sellers only. It took 26 years for gold to regain those prices.

Similarly, on 26 Feb 1985, the dollar staged its largest single-day advance against major foreign currencies in seven years, rising 4 pfennigs in one day to hit a 13 ½ year high of 3.4390 DEM. The odd thing was, nobody could figure out just why the dollar was soaring, but most pundits quoted in the press agreed that it would continue to do so. The next day however then-Fed Chairman Paul Volcker started talking about more FX intervention and in 15 minutes the dollar was down about 8 pfennigs. The bid-offer spread in USD/DEM, the most liquid pair at that time, was 150 pips.

In other words, we have seen in the past how a buying frenzy followed by a selling frenzy often marks the peak of a market. This has me intensely worried as that’s the same pattern we’re seeing here. Never fear though, the “buy-the-dip” crowd is already at work – S&P 500 futures are indicated +0.4% at the time of writing.

Getting back to lumber, while gold and silver have attracted a lot of attention this year, lumber is actually the star performer far and away. The housing boom, the increase in DIY projects by people stuck at home, and Trump’s tariffs on lumber imports from Canada have all provided a fundamental basis for the surge in lumber prices. 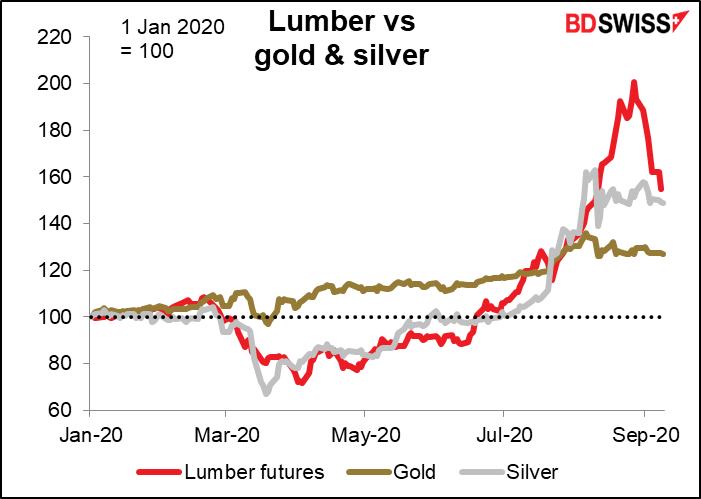 However, pardon me if I think that part of the rise was the same sort of “irrational exuberance” that pushed the value of Tesla up to more than Volkswagon and Toyota combined. This may explain why they had to raise the limits on lumber futures to $29 a day from $19. Lumber has been limit-down seven days in a row – and this follows six days out of eight days when it was limit up. (Note by the way that lumber futures are fairly illiquid; the most active contract, November, traded 105 contracts yesterday and has open interest of 2,457 contracts. That will of course contribute to its volatility.) 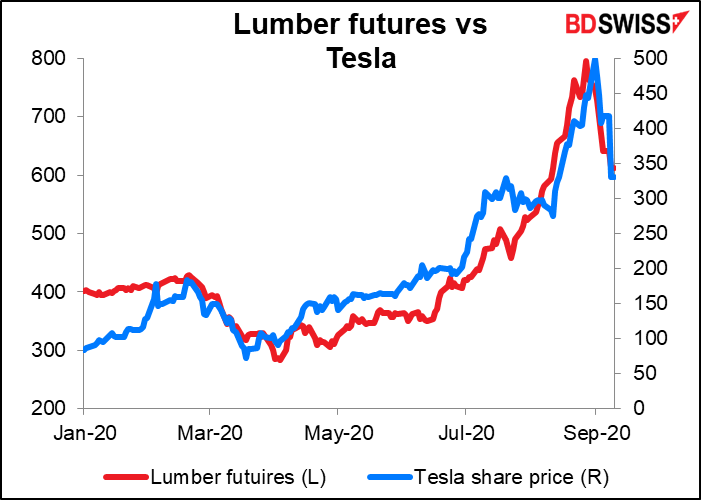 The New York Fed updated its weekly economic index of high-frequency US indicators. It seems to follow a regular pattern:  the previous week was revised up (to -4.4 from -5.0) but this week was lower (-5.5). Also in this case, two weeks ago was revised down (to -5.3 from -4.3). It seems to be trending higher but with a lot of fits and starts. By contrast, the corresponding German indicator is already well above year-ago levels and keeps heading higher. 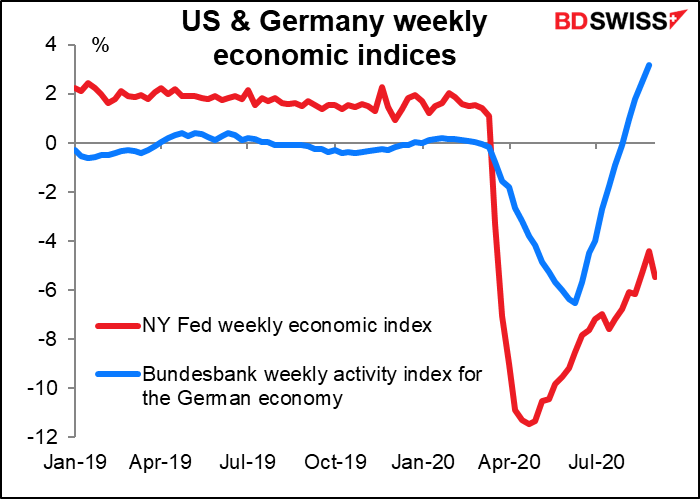 The big thing today is the Bank of Canada meeting. I discussed my outlook in depth and detail in my weekly outlook, complete with several compelling graphs, so no need to rehash everything here. In short I don’t think it’s going to be so big – I expect no change in policy and little change in the statement, perhaps a more optimistic tone but that’s about it. The Governing Council seems to be satisfied with the results of their monetary policy and the way the Canadian economy is behaving. 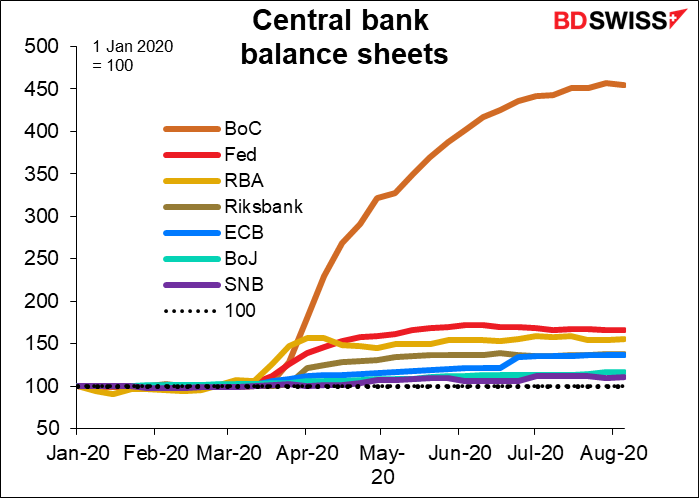 Nonetheless, the Council has been keeping its pledge to continue “its large-scale asset purchase program at a pace of at least $5 billion per week of Government of Canada bonds… until the recovery is well underway.” (emphasis added). My question is: given the decent rise in monthly GDP in May (4.8%) and June (6.5%), might they declare at this meeting that the recovery is indeed “well underway” and thereby give themselves permission to reduce these purchases? I think we could have a hawkish change in that they could reduce their QE program. That might be positive for CAD.

Otherwise I expect policy to remain unchanged. In particular, I see no change in their pledge to “hold the policy interest rate at the effective lower bound until economic slack is absorbed so that the 2 percent inflation target is sustainably achieved.”

USD/CAD is often more volatile than usual on days when the Bank of Canada meets, and particularly when they change rates. However the last two meetings have been exceptions. If they keep policy unchanged at this meeting I wouldn’t expect much volatility at all, at least, not related to the decision – volatility caused by gyrating oil prices is another matter. But if they do cut back their purchases we could see USD/CAD fall significantly. 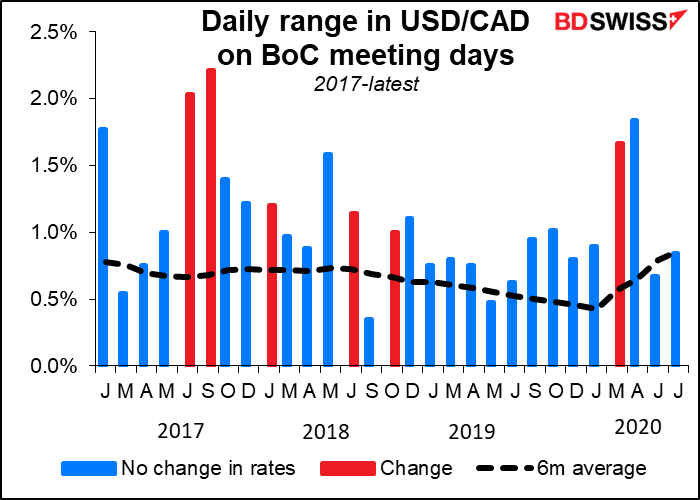 Other than that, not too much on the schedule. I wouldn’t expect Canadian housing starts to attract that much attention two hours before the Bank of Canada meeting. Starts are expected to fall back a bit from the surge in June, a 2 1/2 -year high. Nonethelss the forecast rate would still be historically strong – the forecast rate of 222k starts was the six-month average last September. The housing market in Canada is as hot as in the US and for the same reason – people fleeing cities for the suburbs. 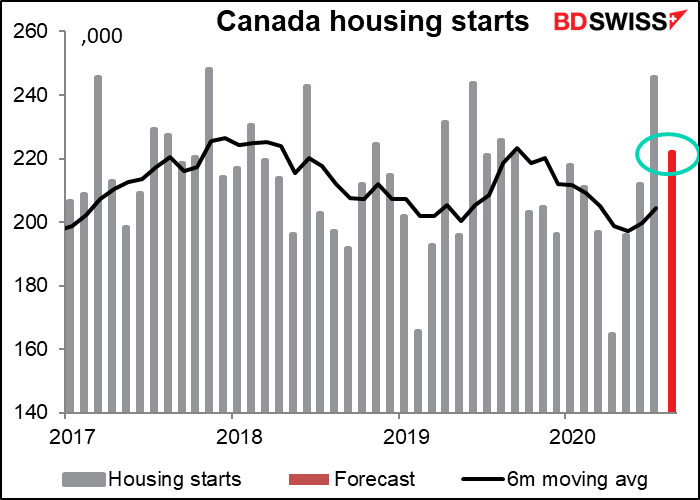 I admit that the Job Offers and Labor Turnover Survey (JOLTS) report and its job openings isn’t a big market-mover – it went out of style when Janet Yellen left the Fed. Nonetheless I think it’s important to look at just to see how the employment picture is going, as the flip side of the unemployment data. No one is going to get a job if there are no jobs going! The market forecast is so-so, though. economists are expecting an increase of only 111k jobs, vs +518k in the previous month. It’s going to take a long time to get the unemployment rate down at that rate. And remember, these figures are for July, when a lot of states were starting to open up again. They’ll probably be worse in August and September. 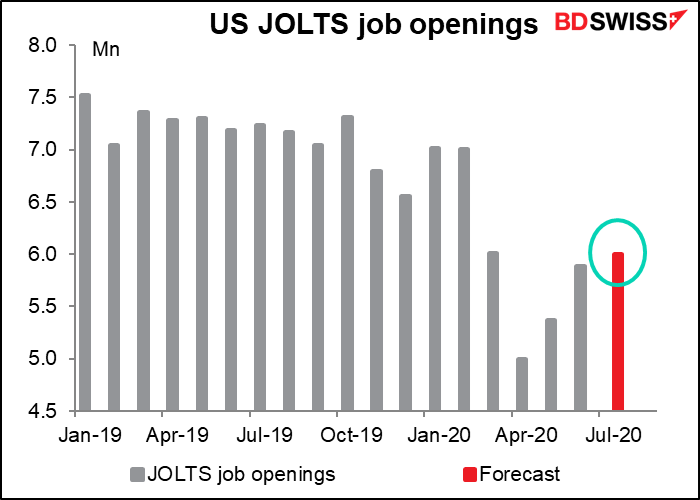 Overnight, Japan announces its machinery orders. This is one of the most closely watched Japan indicators, although heaven knows why – month to month it’s incredibly volatile and even a six-month moving average often doesn’t trend. Now it’s trending lower, and even the 2.0% mom rise that the consensus forecast predicts wouldn’t be enough to lift the six-month moving average. I think this report will add to the sense that Japan is a laggard in the global recovery story and should therefore be negative for the yen. 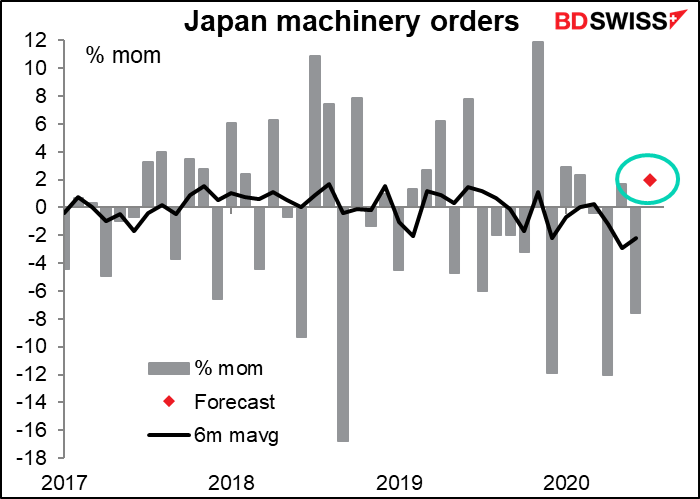 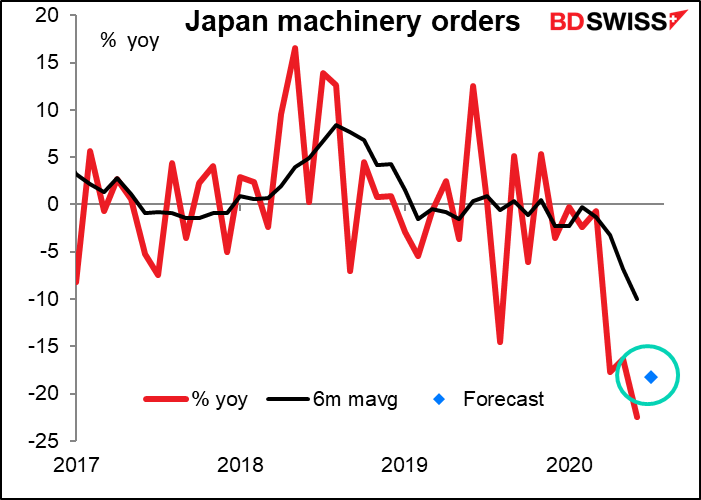 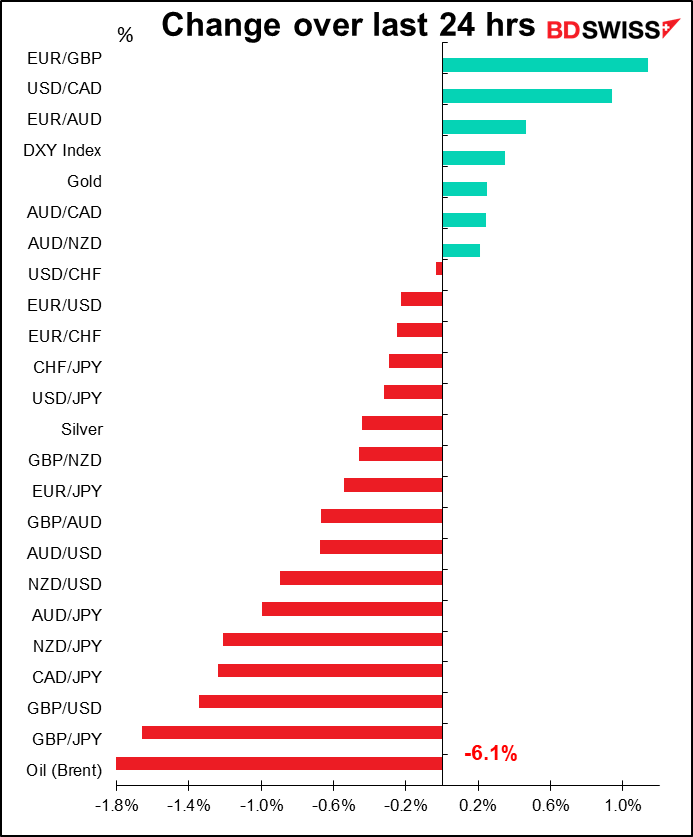