You are at:Home»Articles»Bipartisan Agreement to Weaken USD Threatens the Currency Market

US policy towards the dollar may be set to turn as Trump looks for ways to weaken the world’s most important currency. That would be a dramatic turnaround in US policy, which has for many years recognized the central role that the US currency plays in the international monetary system. More ominously, this policy seems to have bipartisan appeal, making it more likely that it will be instituted.

While there is some historical precedence for a weak-dollar policy, in the past it has required the cooperation of other countries – cooperation that this time would probably be absent. Thus I view this as a risk to the dollar but by no means a certainty.

The US policy towards the dollar has for decades now been summed up as “benign neglect” at best. In recent years, the official most closely associated with a dollar policy was Treasury Secretary Robert Rubin (1995-1999), whose mantra was “a strong dollar is in the interest of the United States.” He repeated this over and over largely to bolster the dollar, which was under attack during his tenure. Rubin’s successor, Larry Summers, also said that “The United States is in favour of a strong dollar.”

But the key point is, both men said it but never did anything about it. The data are available from 1996 and show that the US has only intervened in the FX market three times since then, and two of those times it was done at the request of another central bank. The US’ basic position is that countries should not “manipulate” their exchange rates “for purposes of preventing effective balance of payments adjustments or gaining unfair competitive advantage in international trade.” Apparently, all the major economies agree on this, because the G20 communique continually reaffirms the group’s pledge that “We will refrain from competitive devaluations, and will not target our exchange rates for competitive purposes.”

This may be set to change however as Trump is failing in his drive to narrow the US trade deficit. The balance of trade in goods alone, which is what he focuses on, hit a record $79.8bn last December and seems headed back towards that level again. 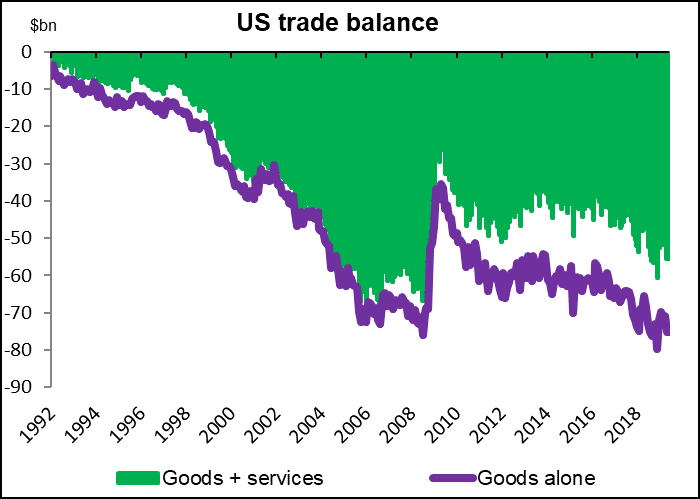 CNBC last week reported that Trump has asked aides to find a way to weaken the dollar in order to boost the economy ahead of next year’s presidential elections. He has also reportedly asked questions about the dollar while interviewing nominees for the Fed Board of Governors positions. He said in a tweet that the US should match China and Europe at their “big currency manipulation game:”

China and Europe playing big currency manipulation game and pumping money into their system in order to compete with the USA. We should MATCH, or continue being the dummies who sit back and politely watch as other countries continue to play their games – as they have for many years!

Treasury Secretary Mnuchin and chief economic advisor Kudlow reportedly don’t approve of such efforts, but we all know how closely Trump listens to his advisors – just ask (former) Secretary of Defense Mattis or (former) Secretary of State Tillerson or former (fill in the blank). While Mnuchin and Kudlow may be opposed to it, these two don’t seem to me to be the type to resign over a point of honour – and even if they do, I’m sure the administration would be able to find someone to pull the trigger.

While direct intervention in the FX market seems remote at this time, the risk of even verbal intervention to get the dollar down poses a significant threat to the dollar. Moreover, as the world shifts towards another round of central bank interest rate cuts, we could see more “covert intervention” as countries – including, but not limited to, the US – use monetary policy as a way to weaken their currencies without intervening directly in the FX market.

The real fear to me is that this could become a bi-partisan issue in the US, one of the rare economic strategies that both sides can agree on. Several of the Democratic Party candidates have focused on the trade issue as well and are also looking at weakening the dollar as a way to address it. Robert E. Scott, a senior economist with the Economic Policy Institute Policy Center, recently wrote an op-ed piece in the New York Times entitled “Elizabeth Warren’s Radical Plan to Fix the Dollar.” “Ms Warren and Donald Trump agree on at least one thing: America’s currency problems are hurting workers,” he wrote, pointing out that Warren’s plan includes “a call to tackle America’s overvalued dollar.”

Is the dollar overvalued? It’s hard to say definitively, but relative to the past, its real effective exchange rate (REER) against its major trading partners is about 11% above the average level of the last 10 years. Typically, the dollar has started to reverse when the REER got around ±15% of the long-term average. So it wouldn’t really be going against economic theory or history for the dollar to weaken from here anyway. All it needs is a push. 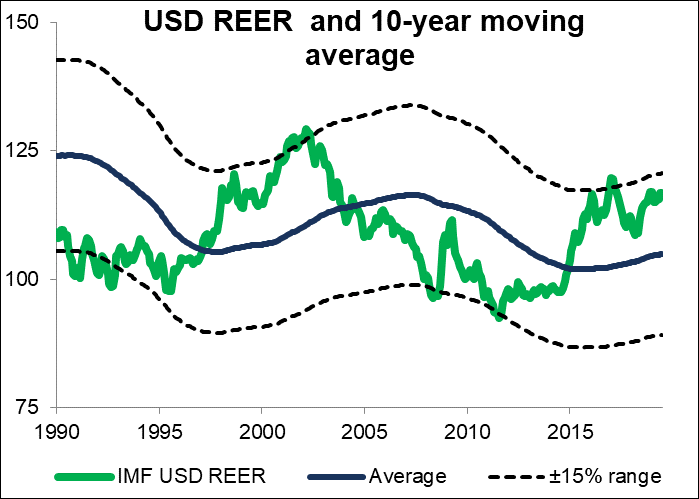 This isn’t necessarily an issue for today, but it’s something you should be aware of as the US elections come more into focus as a theme and the question of what the Republicans might do to cling to power and what the new Democratic administration might do if (when?) they get into office. The question remains though, what can they do about it? And what would other countries do in response? Those are subjects for another comment.