You are at:Home»MARKET PREVIEW»AUD up, USD down in “Risk-on” Market; ZEW, Empire State Indices Risk sentiment recovered today as UK trials of the Oxford and AstraZeneca vaccine resumed and the CEO of Pfizer said a vaccine will likely be available in the US by the end of the year. There were also some big merger announcements in the tech sector that buoyed sentiment. Stocks and AUD gained while the dollar fell in a typical “risk-on” move.

Yet both silver and gold rose, suggesting that they’re not trading as safe-havens but rather as typical risky assets.

The JPY TWI gained, but that was just because of the weaker dollar.Press reports say

incumbent Finance Minister Taro Aso is likely to keep his post in the new Suga cabinet. Aso has been finance minister since the start of the Abe regime in 2012, so keeping him on would reinforce Suga’s message of continuity. FYI Aso said the incoming government should consider calling an early election. That idea seems to be gaining traction, especially as Suga is turning out to be more popular with the voters than had been expected.

GBP gained, particularly against the weaker dollar, as Parliament debated the Internal Market Bill. PM Johnson said MPs must now consider the alternative to a Brexit agreement. I wonder:  is this what people thought they were signing up for? There was never a majority in favor of a “no-deal” Brexit.

The UK employment data is already out – the unemployment rate was exactly as expected, whle employment fell less than expected (-12k vs -118k expected).

Germany’s ZEW survey is expected to show a bit of improvement in both the current situation and expectations, but not much in either. The gap between the two (the grey bars in the graph) are expected to remain about the same. 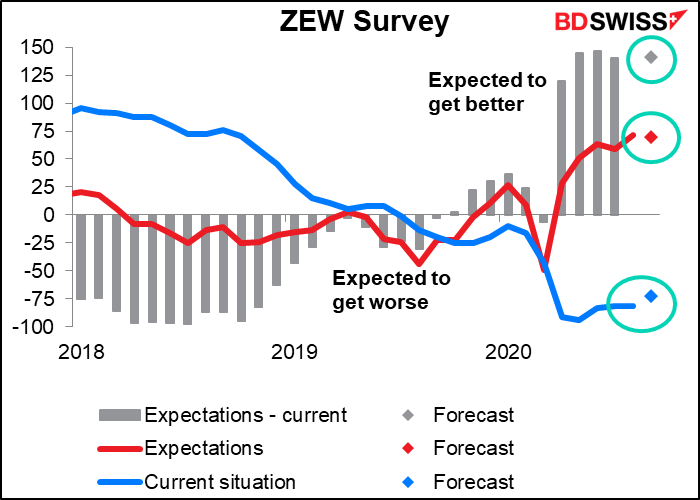 We then have to wait for North America to wake up, whereupon we’re delighted to see the Canadian manufacturing sales. They’ve been rebounding at a pretty good clip and are expected to continue to recover, although the expected 7.0% mom rebound will still leave them -5.1% below the average level of January & February. Still, it’s a lot better than April. Durable goods shipments, particularly auto production and aerospace exports. Higher lumber prices also help. Food and beverage production, which accounts for 44% of all nondurable production, is already almost back to pre-pandemic levels. 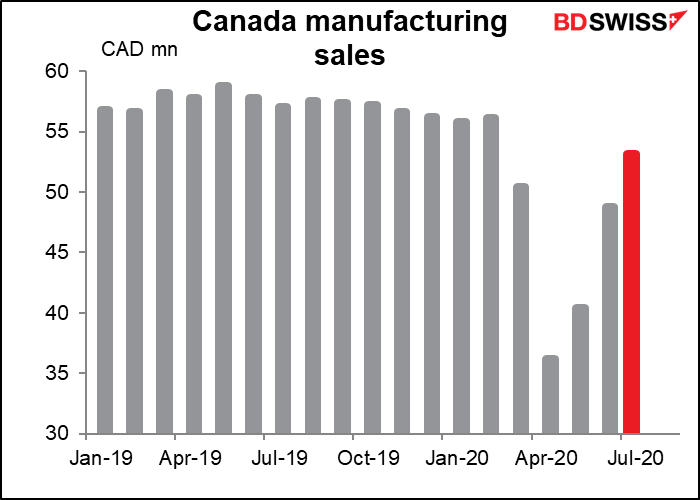 Today’s Empire State manufacturing index is expected to be up a little, while the Philadelphia Fed business survey on Thursday is expected to be down a little, but both are expected to remain in expansionary territory. The net impression at the end of the day will probably be that there’s not much change – that the economy continues to recover slowly. 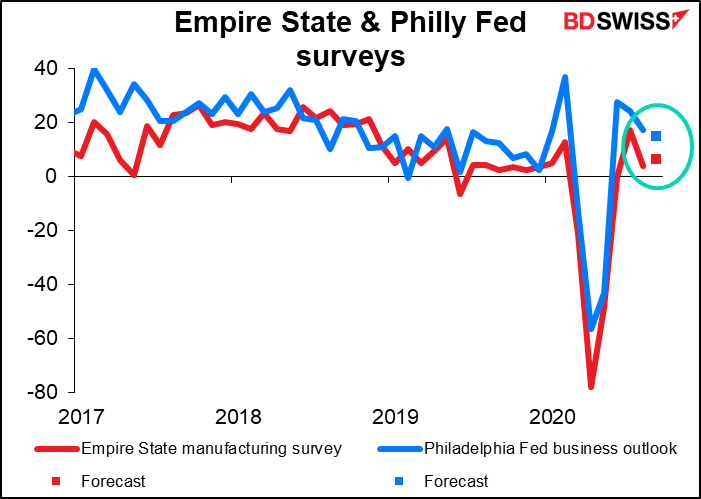 The message from US industrial production (IP) though may be that the rebound is going painfully slowly. It was originally powered by a rebound in auto production, but that’s slowed somewhat, leaving the recovery painfully slow. The forecast 1.0% mom rebound in IP this month would leave the index still about 10% below the January/February average.That’s a lot of ground to make up. 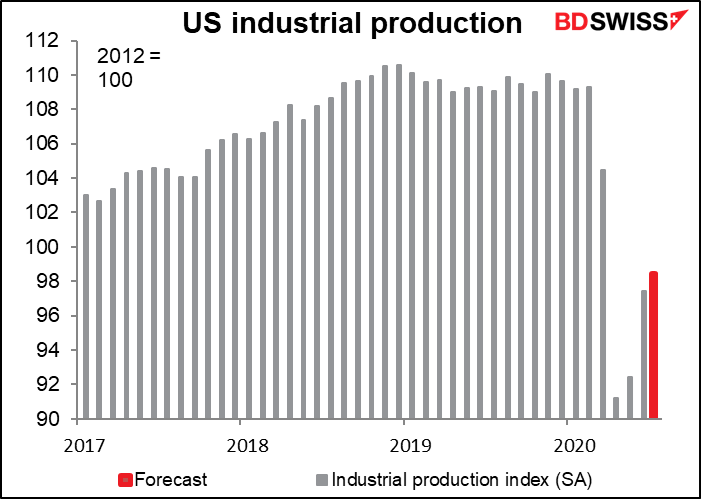 Then overnight we get Japan trade figures. Trade is expected to be more or less balanced, on both an NSA and SA basis. 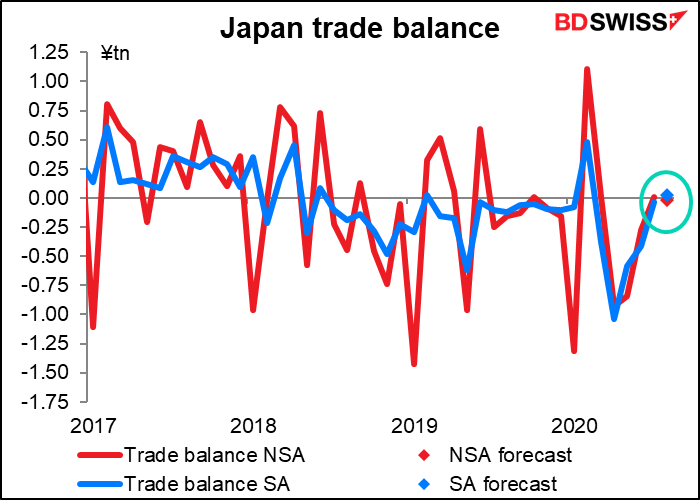 Both exports and imports are still down sharply from a year ago, but exports are expected to be down a little less, which is why the trade deficit is forecast to turn into balance. 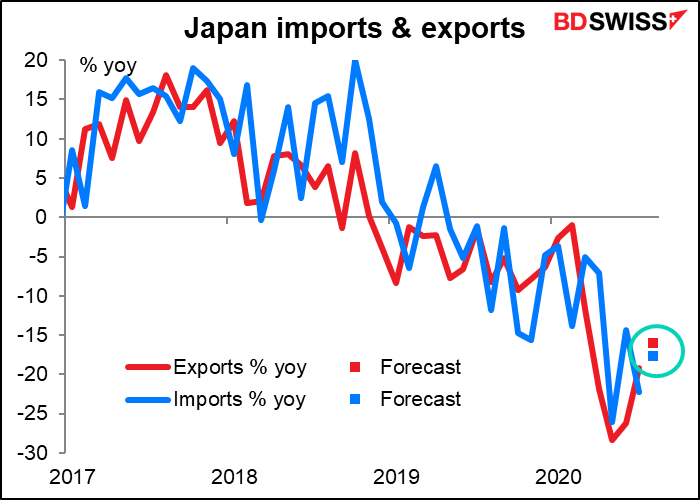 The big excitement for today in Japan is that the former Chief Cabinet Secretary Yoshihide Suga, who on Monday was elected President of the so-called Liberal Democratic Party (LDP), will today inevitably be elected Prime Minister of Japan. That’s because the Diet elects the PM, and the party that has the majority in the Diet – which since 1955 has almost exclusively been the LDP – elects its leader as PM. What can we expect from the new PM Suga? A continuation of so-called “Abenomics.” However from what I can tell, the innovative part of Abenomics – economic reform – finished several years ago, and all we’re left with is massive monetary & fiscal stimulus. The one exception is likely to be the mobile phone industry. Suga pushed for greater competition in the mobile phone industry when he was Minister for Internal Affairs and Communications in the 2000s. As Chief Cabinet Secretary, he pressured the companies to lower their fees in the summer of 2018 by suggesting that Japan’s mobile rates could be 40% lower. Some Japan telecom stocks have been moving in anticipation of  a shakeup in the industry.

No forecast for the Westpac/Melbourne Institute leading index, but it does sometimes move the market so I include a graph of it anyway. No extra charge! 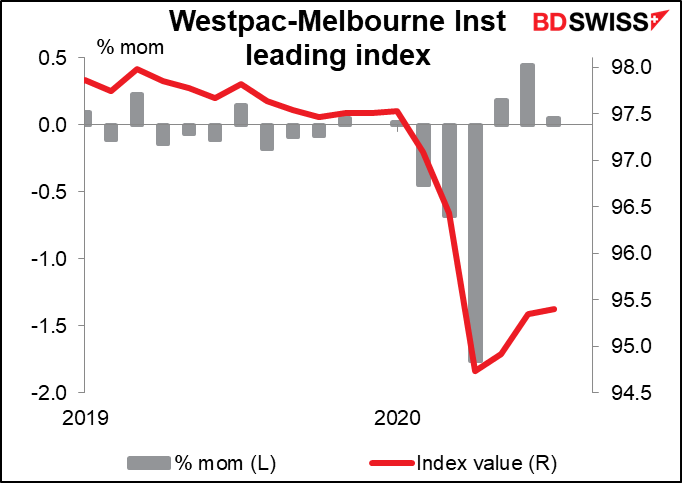 Then, as my loyal readers in the UK are just dragging themselves out of bed and making their bleary-eyed ways to their keyboards, the UK announces its inflation data. With a large 0.6% mom decline in prices expected, the yoy rates for both the headline and the core consumer price indices (CPI) are expected to fall well outside the Monetary Policy Committee’s area of tolerance, the ±1% range around the central 2% rate. Assuming that the forecasts are correct, we can look forward to “an open letter to the Chancellor explaining why inflation has moved away from target and what action the Bank is taking to bring inflation back to target.” I expect they’ll say “not much, mate,” because a tighter monetary policy is not what anyone wants at this point – on the contrary, there may be a vote or two for further loosening at the Bank of England meeting regardless of where inflation is. 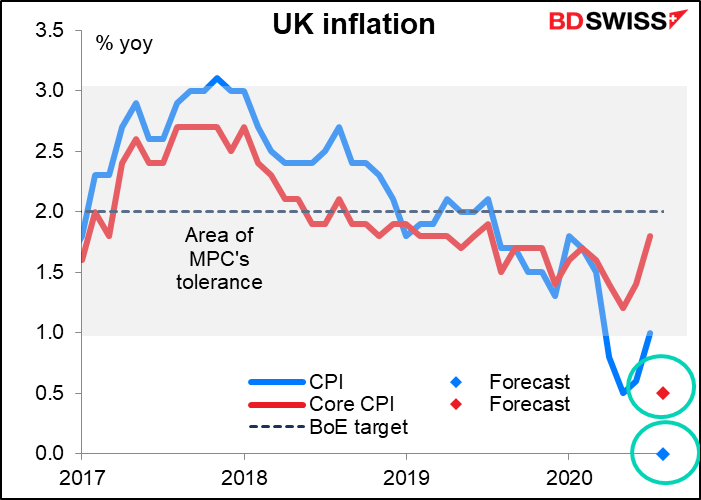 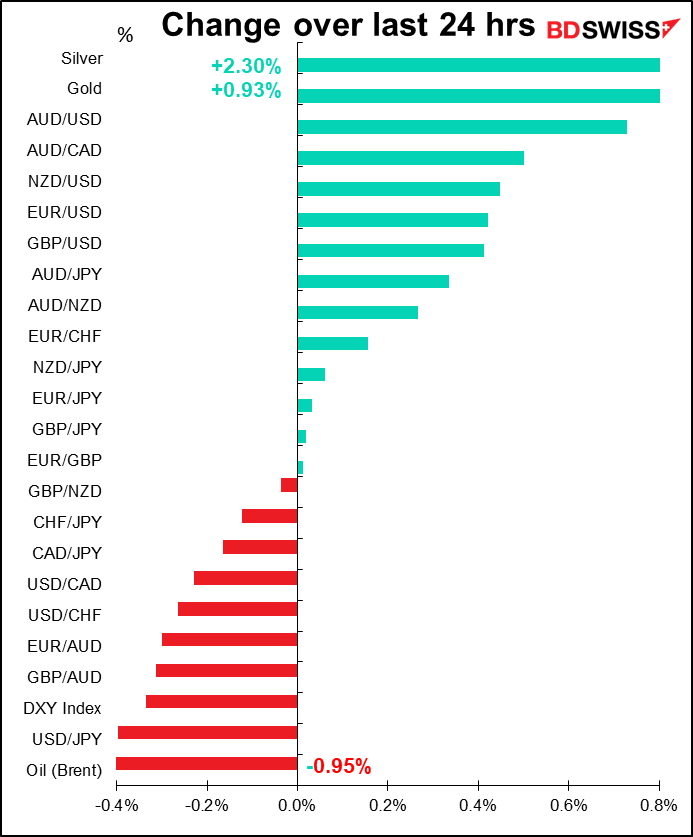