You are at:Home»MARKET PREVIEW»AUD Up, JPY down in “Risk-on” Mood; Powell, Mnuchin Testimony, Tankan 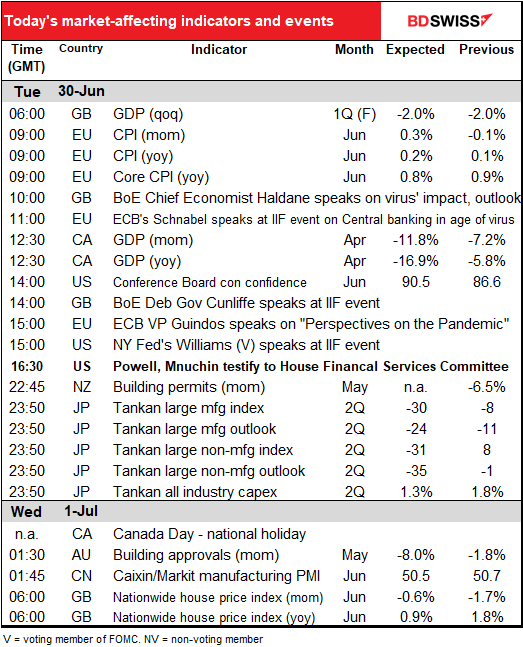 It was a “risk-on” mood yesterday as an astonishing turnaround in US pending home sales (-21.8% mom in April, +44.3% in May) and a much better-than-expected Dallas Fed manufacturing index countered the fears about the virus and the initial weakness in equity markets at the opening. Yet 3-yr, 5-yr and 7-year US notes hit a record-low close, indicating that concerns haven’t all disappeared.
The risk-on mood percolated into the FX market with a twist yesterday. AUD gained the most and JPY lost the most, which is what you’d expect. But in between, the figures were a bit strange. Notably, NZD and CAD didn’t participate in the rally. CAD is particularly surprising, given that oil prices were up (WTI was up 4.5%). This may have to do more with end-month position-squaring than any fundamental view, though. (But see below on the different pace of reopening in Australia vs Canada.)

The story of the day was EUR, which gained across the board. It was particularly well bid on the crosses, especially EUR/CHF and EUR/JPY. Probably some of that too is end-month and end-quarter positioning. But I think it’s also an indication of what I was talking about yesterday: the emphasis on growth as the factor that differentiates currencies, and the “domestic dollar” vs the “international dollar.” Blackrock, the world’s largest asset manager ($7.4tn under management!) yesterday upgraded European equities to overweight, reasoning that the region is likely to enjoy cyclical upside as the European economy restarts while the US economy falls back into lockdown. This is the “economic divergence” story that I had expected would drive USD at this point. 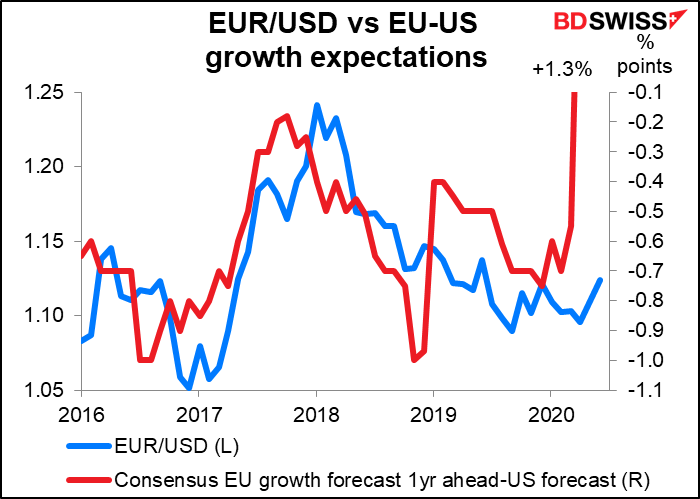 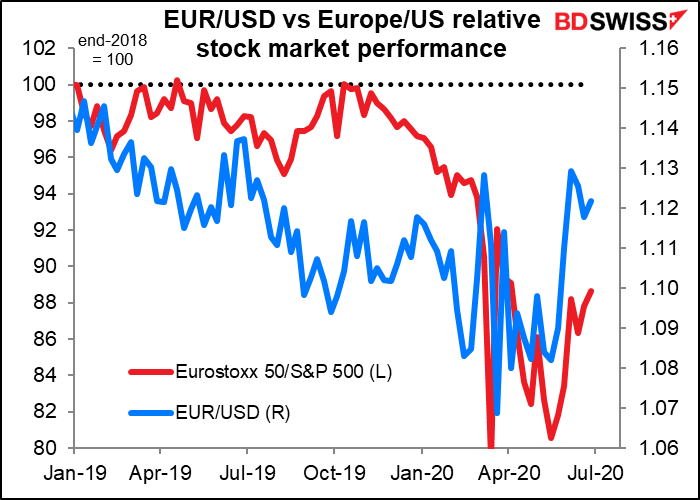 Several US states that had planned to reopen have decided to slow their reopening plans after last week’s record number of new cases. While that’s likely to dampen economic activity in the short-term, longer-term it’s a positive as it will help to contain the virus and allow a more sustainable reopening. According to the New York Times, “at least a dozen states and cities are pulling back on reopening plans, with measures that effectively declare: Not so fast.”

Speaking of which, the different pace in reopening may explain some of AUD’s outperformance vs CAD as well. The graph below is from Open Table, a restaurant booking app, and it shows the yoy change in dinner reservations. Australia and Germany are back to normal, while the US and Canada are still far far below their usual rate. The UK too. 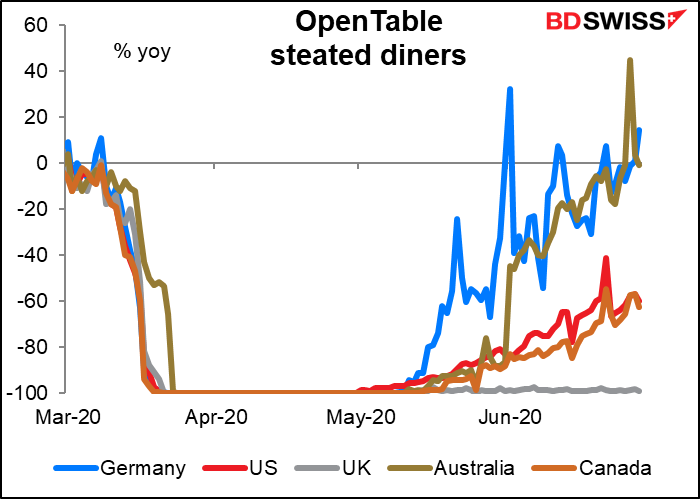 Today’s market
UK PM Johnson is scheduled to make a major speech today arguing for large-scale infrastructure investment. I’m not sure that will have much impact though; it boosted GBP at the Asian opening on Monday, but the rally quickly began to fade and GBP steadily declined until the end of European trading, at which point it flatlined. I think people initially bought the rumor and then quickly began selling it again, perhaps cognizant of the fact that Brexit talks are also continuing this week and disappointing headlines are almost inevitable.

The Eurozone consumer price index (CPI) is still bouncing along the bottom. The headline figure is expected to be one tic higher, which seems quite possible as Germany’s harmonized index of consumer prices yesterday showed a surprisingly high increase (+0.8% yoy vs +0.5% previously, +0.6% expected), but the core figure – which is what the ECB targets – is expected to be one tic lower. In any case, I’m not sure it matters. As I mentioned yesterday, ECB Executive Board member Isabel Schnabel Saturday said that Eurozone “inflation could remain at close to 0% well into the next year, and even negative inflation rates are possible.” I don’t think an uptic in the headline rate one month is going to convince anyone that a new trend is in place. 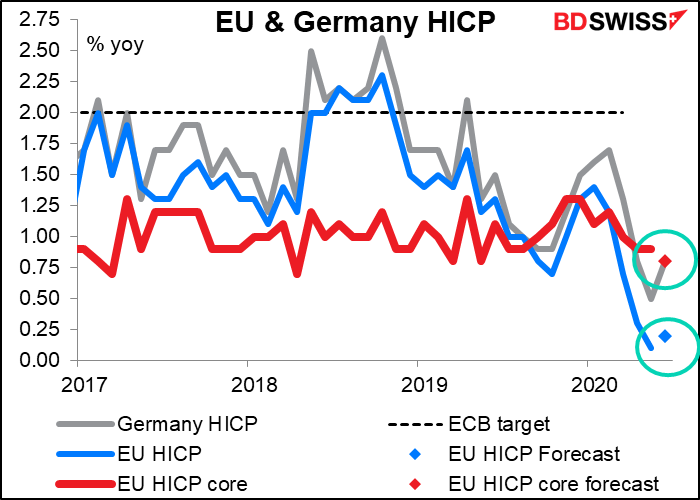 We have a lot of speakers today. Bank of England Chief Economist Andy Haldane was the only dissenter at the recent BoE Monetary Policy Committee meeting, so his views are worth listening to just in case he manages to convince some of his colleagues. Then there’s a webinar hosted by the Institute for International Finance (IIF) that features a host of luminaries, including the above-mentioned Ms. Schnabel and NY Fed President Williams (V), among others. That seminar is “Central Banking in the Age of COVID-19.”  Plus other miscellaneous speakers.

The big speaker engagement though is Fed Chair Powell and US Treasury Secretary Mnuchin testifying to the House Financial Committee. The title of the testimony is “Oversight of the Treasury Department’s and Federal Reserve’s Pandemic Response.” You can watch it online here if you want. My guess is that most of the attention will focus on the despicable Mr. Mnuchin and the Treasury’s appalling lack of transparency with regards to who is getting the billions and billions of dollars in loans & grants. They finally agreed on 19 June to release the names of companies and nonprofits that received loans of more than $150,000, along with some other data about the companies. But while this will account for 75% of the money, it won’t account for the majority of the recipients, most of whom got smaller loans. (One wonders how many hotels in Palm Beach, FL got such loans, for example.) Similarly, Powell is likely to be grilled on who’s getting loans and aid. He on the other hand is likely to stress that monetary policy can’t do everything and that fiscal policy is necessary.

Canada’s April GDP is expected to be abysmal, but that’s only to be expected. The key is how much of a rebound there was in May, and we won’t know that for some time.

The Conference Board consumer confidence index is expected to rise a little. That would be in line with the rebound we saw in the U of Michigan consumer sentiment index earlier in the month. I’m astonished US consumer confidence is so high – I can only conclude that the Trump regime has been successful in convincing people that the virus is just “fake news” and it will “disappear like magic.” Given that the number of new cases is now rising in 46 of the 52 US states & territories, I wouldn’t be so confident at all. 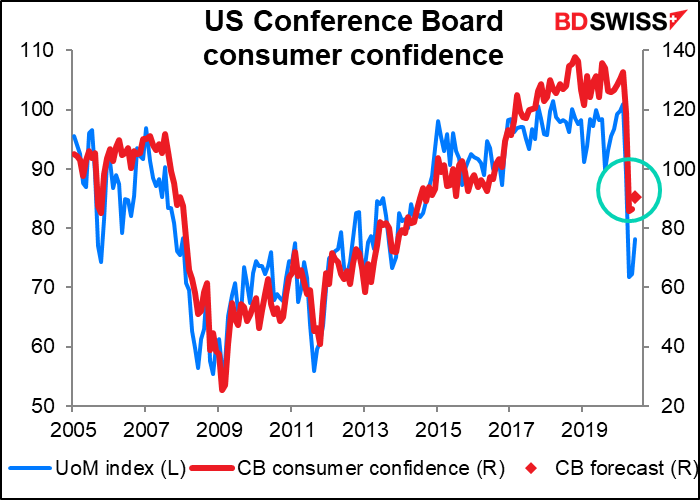 Many people think that the Trump treatment of the pandemic is uniquely incompetent because of the uniquely incompetent nature of the Trump administration. But in fact it falls squarely in line with the traditional Republican approach to governing. Remember what journalist Ron Suskind reported back in 2004 when he interviewed a top aide to President Bush (later identified as Karl Rove):

“The aide said that guys like me were ‘in what we call the reality-based community,” which he defined as people who “believe that solutions emerge from your judicious study of discernible reality.” … “That’s not the way the world really works anymore,” he continued. “We’re an empire now, and when we act, we create our own reality. And while you’re studying that reality—judiciously, as you will—we’ll act again, creating other new realities, which you can study too, and that’s how things will sort out. We’re history’s actors…and you, all of you, will be left to just study what we do.”

It looks to me like a lot of Americans have not been in the “reality-based community.” But they may be soon, unfortunately.

Overnight, the Bank of Japan releases its Short-Term Survey of Economic Conditions, universally known by its Japanese acronym, the Tankan. The market expects a sharp drop in the diffusion indices for Q1, especially in services, which are expected to drop into negative territory from positive. But they’re not expected to be as bad as they were back in 2008/09, and furthermore they’re forecast to rise a little in Q3. 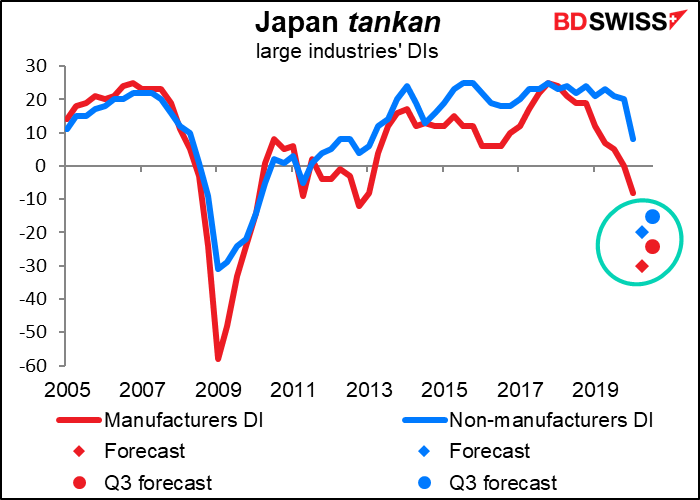 Contrary to what I said in my weekly comment, the Tankan figures actually agree with the manufacturing purchasing managers’ indices (PMIs). In fact the two are a pretty good fit. (I only have data for the non-manufacturing PMI back to 2013, so it’s hard to see how those two match up.) 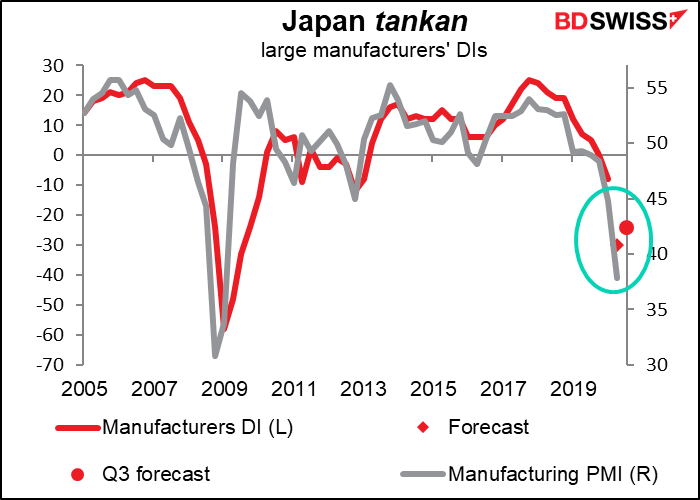 The Caixin/Markit manufacturing purchasing managers’ index (PMI) is expected to show a small decline. This would be the reserve of yesterday’s official manufacturing PMI for the month, which was up more than expected at 50.9, vs expectations of 50.5 (previous 50.6). The two often disagree however as they have a different data pool. In any case though the message is the same: manufacturing in China continues to expand at a modest pace. 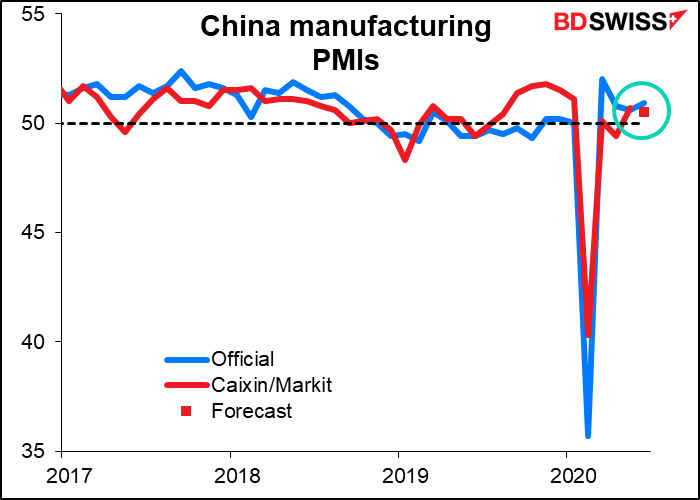 Then, at the crack of dawn in London, the Nationwide Building Society announces its closely watched index of UK house prices. I used to live in London and from my experience, the British have a reputation for talking about the weather, but actually it’s house prices that have captured the national imagination. Everyone I knew either a) owned a house and was constantly wondering what it was worth, or b) thinking of or in the process of buying a house, or c) regretting not buying a house earlier. In this case, only the latter group is going to be happy, because house prices are expected to fall on a mom basis for the second consecutive month. 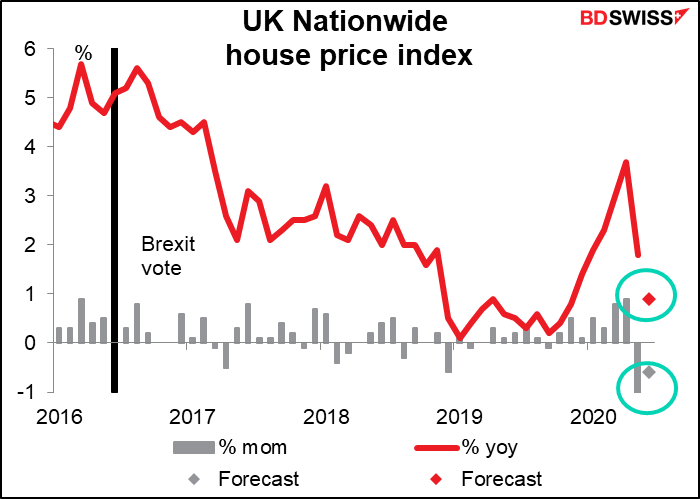 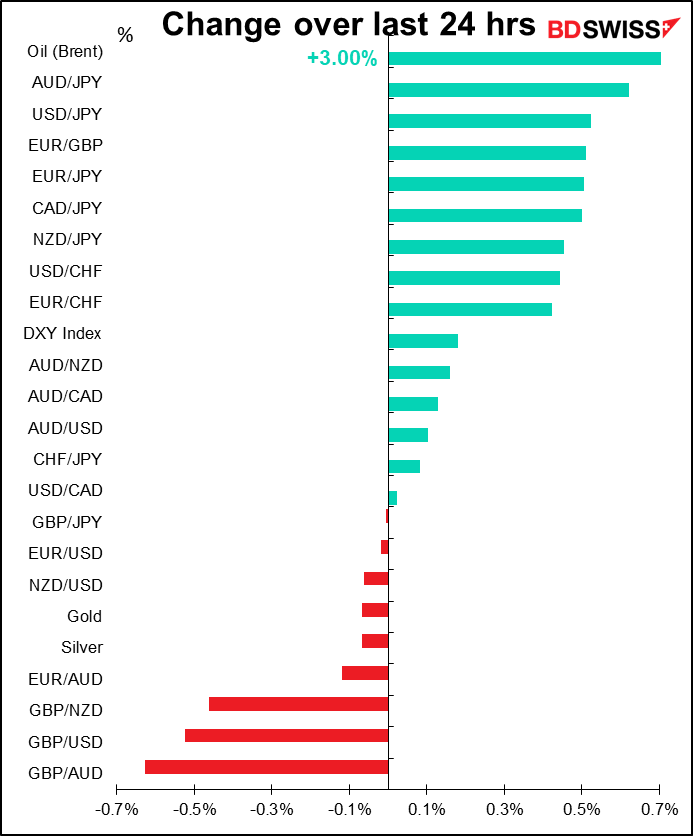