You are at:Home»MARKET PREVIEW»AUD Plunges on Virus Fears; US Durable Goods, AU CPI 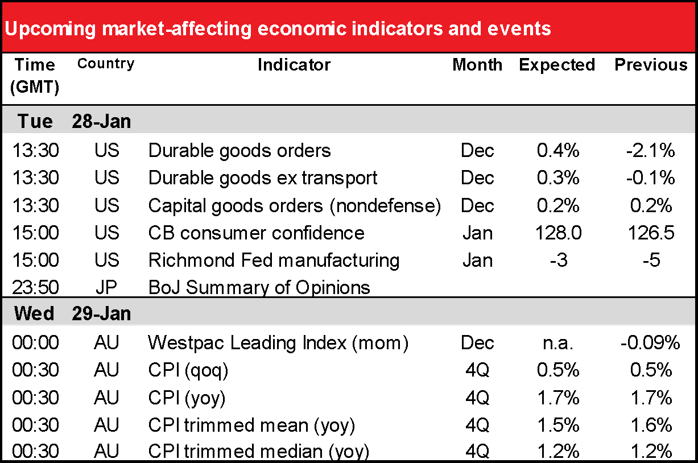 More of the same – “risk off” moves sending the safe-haven JPY and CHF higher and the growth-sensitive commodity currencies lower.

AUD was particularly hard-hit. Not only is China far and away its biggest export market (39% of exports) but also the biggest single source of tourists, Australia’s third-largest export industry. Over 1.4mn Chinese visited the country in the last fiscal year, with trips in January and February accounting for almost one-quarter of total arrivals from China. The tourist industry is already reeling from the impact of the bush fires around the country, which have caused a large number of cancellations. 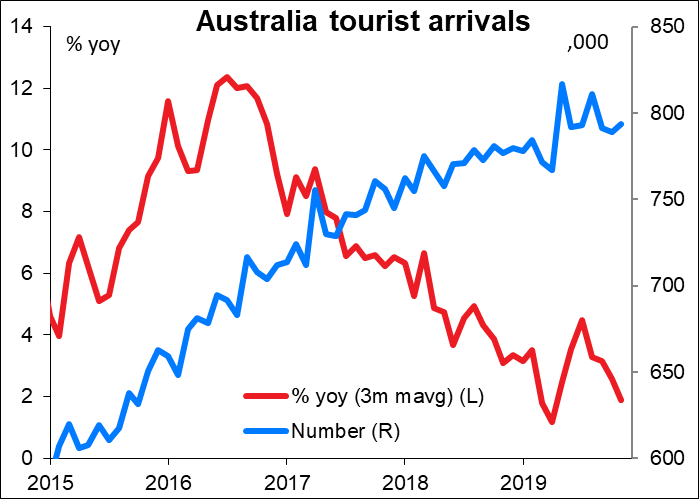 AUD/USD (black line) generally tracked USD/CNH (red line, reversed) over the last 24 hours. The modest bounce in CNH this morning suggests that AUD may be in for some recovery this morning, too.

There are some signs that people are beginning to reconsider the impact of the coronavirus, or at least to wonder if the market moves haven’t gone too far. Oil was up and gold & silver down this morning, reversing some of the moves that took place Friday and at the opening on Monday. But the sharp decline on Wall Street yesterday (-1.6%) indicates that people aren’t ready to sound the “all clear” quite yet. Still, I think some “mean reversion” trades in FX might be worth looking at today as people take profits on the large moves that’ve happened. It’s a truism on Wall Street that nothing moves in a straight line. I think with the recovery in CNH, we could see a bounce in AUD/JPY today too.

Not much on during the European day. Swiss watch exports and the Confederation of British Industry’s retailing survey is about it. Bank of France Governor and ECB Board member Francois Villeroy de Galhau speaks at  aFintech conference in Paris. No clue whether he’ll discuss monetary policy.

The US day starts with US durable goods orders, a major indicator of business investment. The grounding of the Boeing 737 Max has crushed the headline figure here – new orders for aircraft and parts have fallen in nine out of the last 10 months – so pay more attention to the “ex transportation equipment” figure, which is expected to show a decent but not stunning rise. The six-month moving average of this indicator has been at or below zero for five months in a row, so a rebound is certainly due. I’m not sure whether people will believe that this one figure is the start of a new trend, especially as nondefense capital goods orders – an important indicator of equipment spending – are expected to be weak. USD neutral? 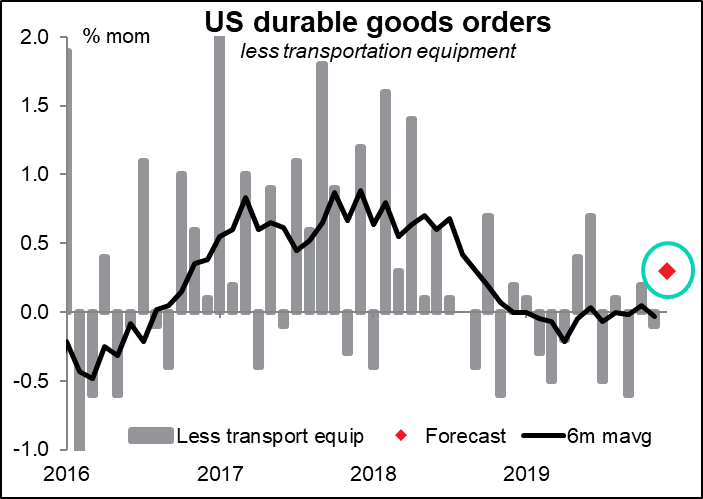 The US Conference Board consumer confidence index is expected to rise slightly, in contrast to the U of M consumer sentiment index, which fell slightly. The two often go in different directions (46% of the time over the last 15 years, in fact) so this divergence is not unusual. The Conference Board measure is more heavily weighted towards the labor market, which is still doing well, while the Michigan methodology places more emphasis on longer-term macroeconomic expectations, which may be affected by fears over trade, the coronavirus, the fact that the US Senate is now an annex of the Federation Council (the Upper House of Russia’s Federal Assembly), etc. In any event I don’t think a small move like what’s forecast will have any market implications. USD neutral. 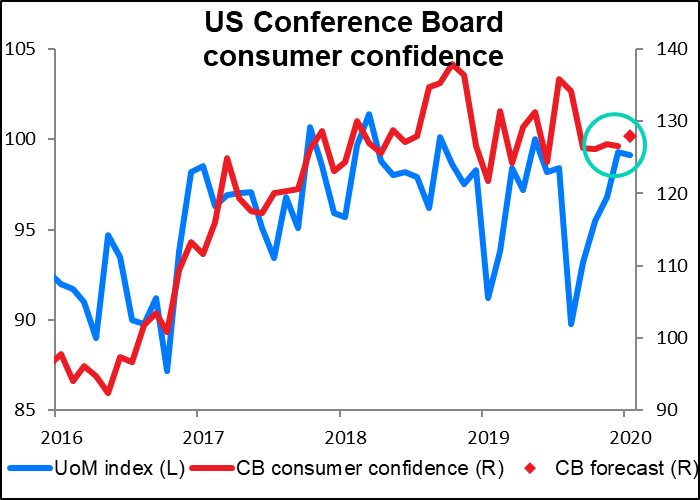 The Richmond Fed manufacturing index on the other hand is significant. While the market seems to put more weight on the Empire State and Philly Fed indices – probably because they come out earlier – the Richmond Fed survey is the one that is best predicts the Institute of Supply Management (ISM) purchasing managers’ index (PMI), one of the most important monthly indicators. The Richmond Fed index tends to generally follow the Empire and Philly Fed indices over time, but on a month-to-month basis the earlier two are not particularly good at forecasting the Richmond Fed index. I think such a small rise that left the index below zero would tend to be disappointing and therefore might be negative for the dollar. Watch out though for tonight’s Australia Q4 CPI (see below). 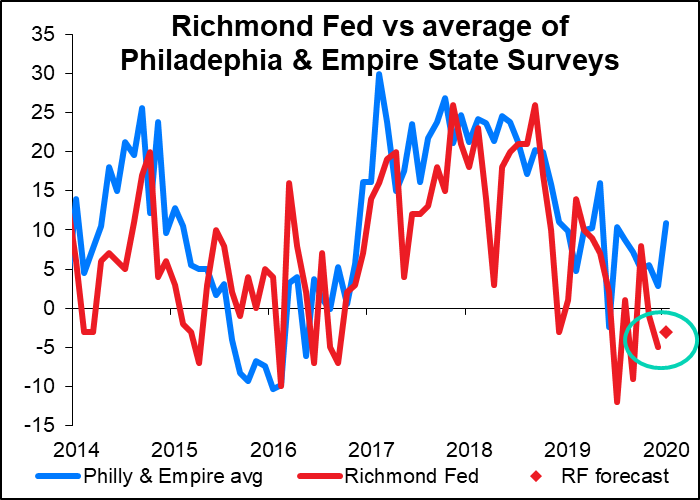 Overnight, Australia announces its consumer price index (CPI). The country only announces this quarterly, so it’s a fairly big deal for the markets. On the other hand, the Reserve Bank of Australia (RBA) has made it clear that it’s more concerned about the employment situation than about inflation right now. Not that it makes much difference – both of them are below what the RBA considers to be the optimal level, meaning the RBA is biased towards loosening policy whichever way you look at it. In this case, the RBA has a headline measure and two measures of coreinflation, but they all tell a similar story:  inflation is below target and either not accelerating (headline, weighted median) or slowing (trimmed mean). Inflation remaining stubbornly below target may add to the pressure on the RBA to lower rates. AUD negative. 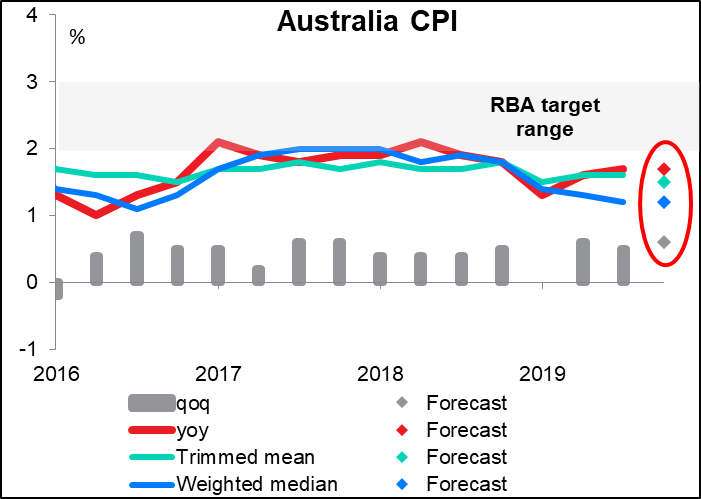 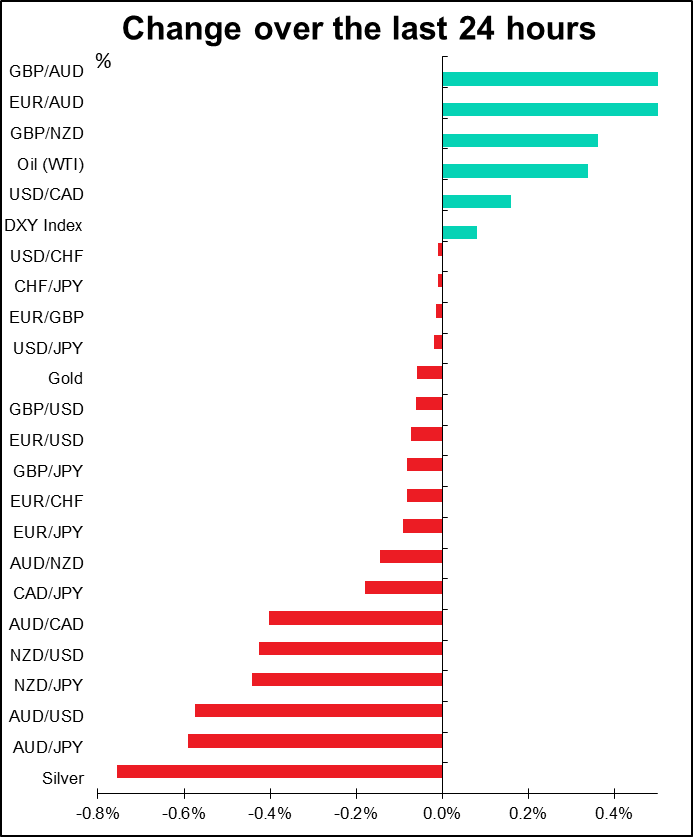