You are at:Home»MARKET PREVIEW»AUD/JPY plunges as US likely to enter Recession; EU CPI, ISM manufacturing 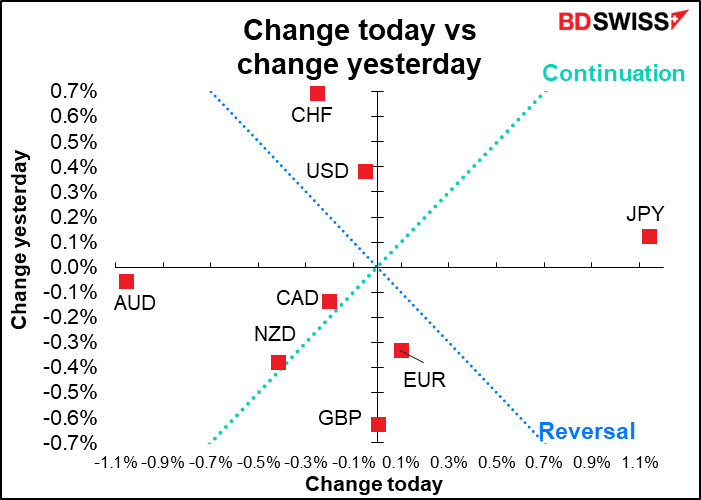 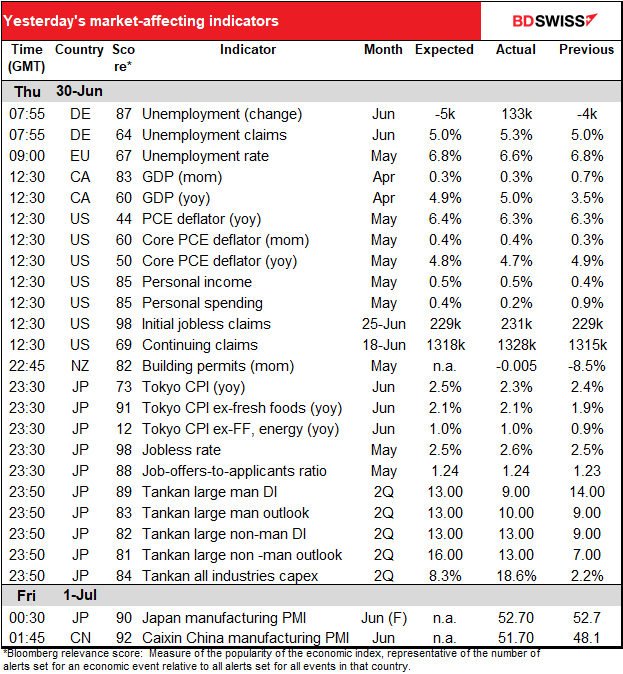 Tremendous volatility in JPY and AUD!

It’s hard to say exactly what triggered the move. USD/JPY was moving lower (JPY strengthening) when the US personal income & spending figures were released (see above). The spending data was weaker than expected, which temporarily caused a “risk-off” move in the markets. Stocks rebounded, but then came off their highs. Since the Tokyo opening USD/JPY has moved pretty closely in line with the S&P 500 futures, suggesting that the move is in response to the overall risk environment. 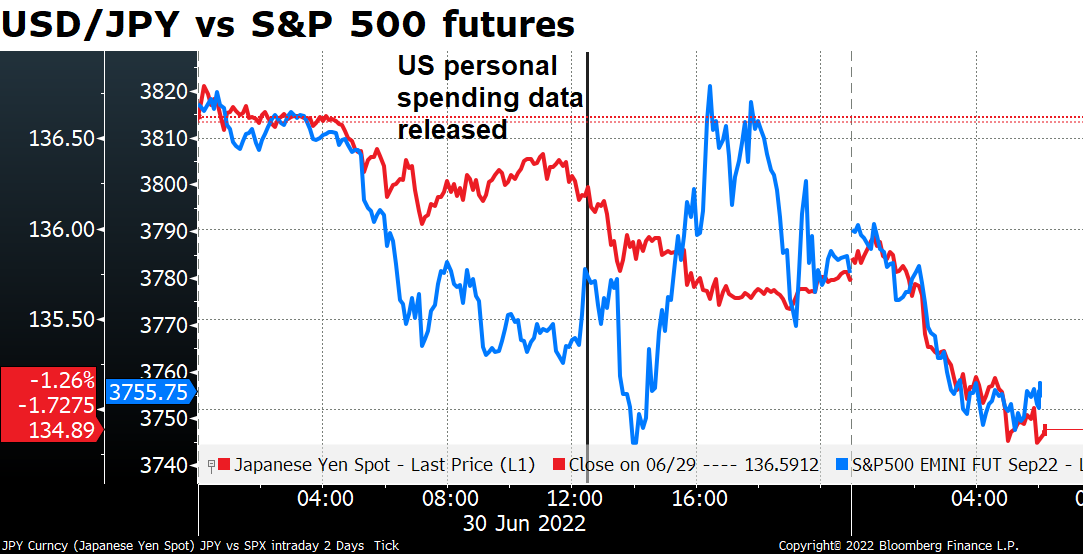 The headline Tokyo consumer price index (CPI) came in weaker than expected, as did the tankan large manufacturers’ diffusion indices (see table). These should’ve been reasons for the yen to weaken (more reason for the Bank of Japan to keep its loose policy in place) but they seemingly had no effect.

One reason the spending data may have hit markets so hard: it caused the Atlanta Fed to downgrade its GDPNow estimate for 2Q US GDP to -1.0% from +0.3%. Since US GDP contracted in Q1, this would mean the US is already technically in recession.

As a result, the Fed funds futures massively repriced their estimates for what the Fed is likely to do this year and especially next year. 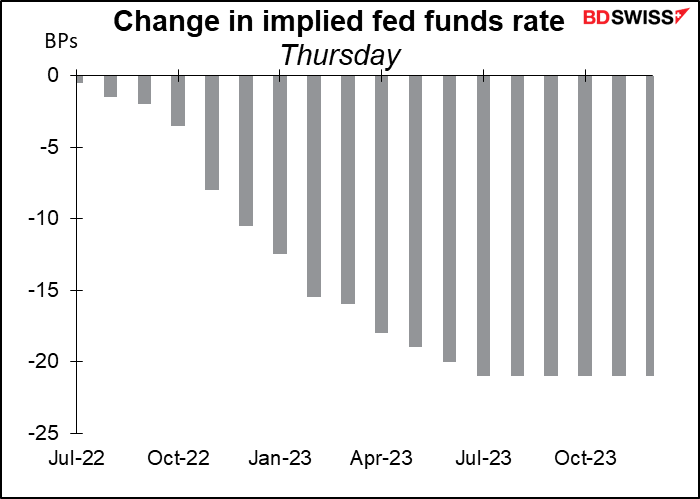 Bond yields declined around the world…

…as did inflation expectations (mostly).

You can see how a general “risk-off” mood captured the markets in the US afternoon and during Asian time by looking how the S&P 500 futures tracked the copper price, both falling. This despite the better-than-expected Caixin China manufacturing purchasing managers’ index (PMI), which climbed back above the 50 line to show growth restored to China’s manufacturing sector.

The risk-off tone was also reflected in oil, which dropped sharply. OPEC+ met and ratified another oil-production increase. This completes the return of supplies that were cut during the pandemic to help balance the market. However, it’s an increase in theory more than in fact because most members aren’t able to boost production anyway. The decision was widely expected and had little impact on the price when it was announced.

Now the question is, what will the group do next? By “the group” I really mean Saudi Arabia and the UAE, because they’re the only members that can still boost production. The group didn’t deal with that question. A lot may depend on US President Biden’s visit to the Middle East July 13-16, which will set the stage for the next OPEC+ meeting on Aug. 3rd.  President Biden yesterday said he wouldn’t directly ask the Saudis or other regional leaders to increase production (“That’s not the purpose of the trip,” he said) but of course establishing better relations with the region can’t hurt in that regard. 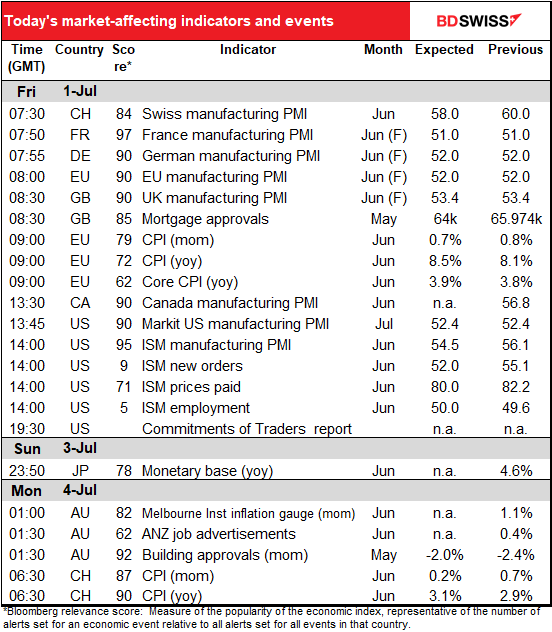 The main focus today will be on the manufacturing purchasing managers’ indices (PMIs) from the various countries, including the final versions for those countries that have preliminary ones as well.

The preliminary figures showed a decelerating pace of expansion. If the other countries show the same pattern, it could confirm market fears of a global slowdown. That might be negative for the commodity currencies. 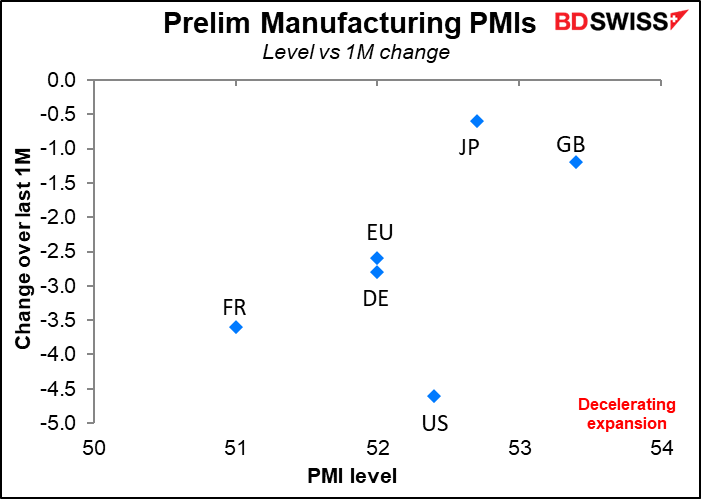 Along with the final manufacturing PMIs comes the Institute of Supply Management (ISM) version of the manufacturing PMI. This is always a biggie for the US even though for my money the S&P Global version (formerly Markit, but HIS Markit was recently bought by S&P) is a better gauge of the US economy.

Having said that, the ISM measure may be a good one for gauging the global economy – it includes the foreign operations of US firms, not just their domestic operations (a big difference with the S&P Global version), which makes it a less accurate reading of the US economy but a potentially useful reading of the global economy. Although unfortunately it doesn’t seem to work that way. 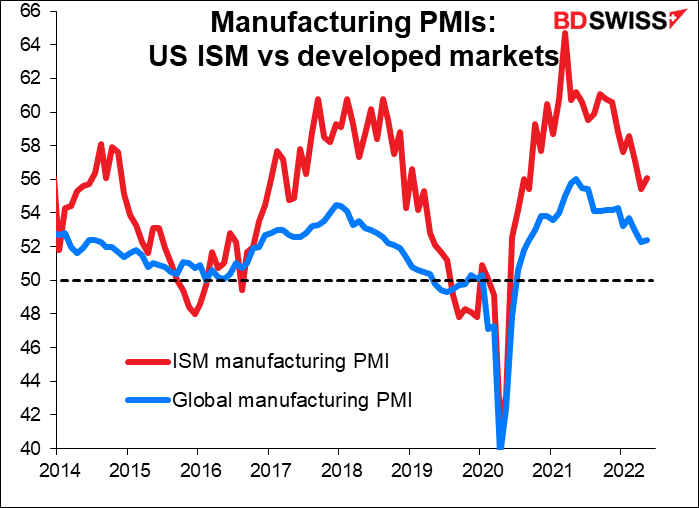 People will be paying particular attention this month to the new orders sub-index. It’s expected to fall but to still remain in expansionary territory (above the 50 line). 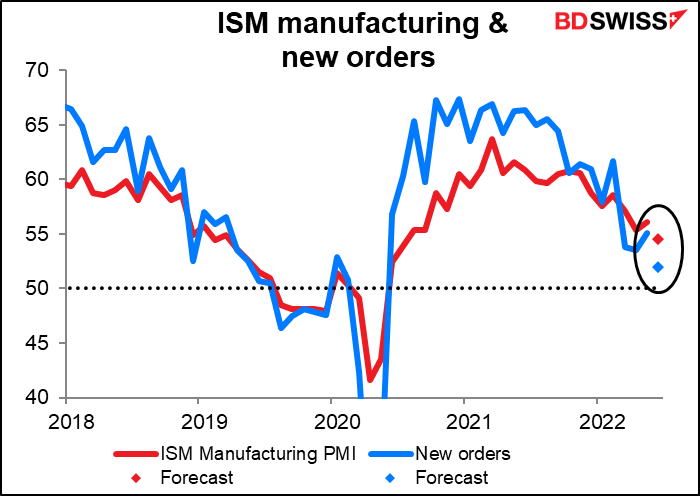 New orders have been trending lower in the regional Fed surveys. Four of the five were in contractionary territory for June (the Empire State survey being the sole exception). This is one of the reasons why people are starting to get worried about a recession. If new orders turn negative in the ISM as well, that would suggest the US economy is slowing rapidly and the Fed might not have to tighten as much as expected, That could be negative for the dollar (if it happens, although it’s not what the market expects.) 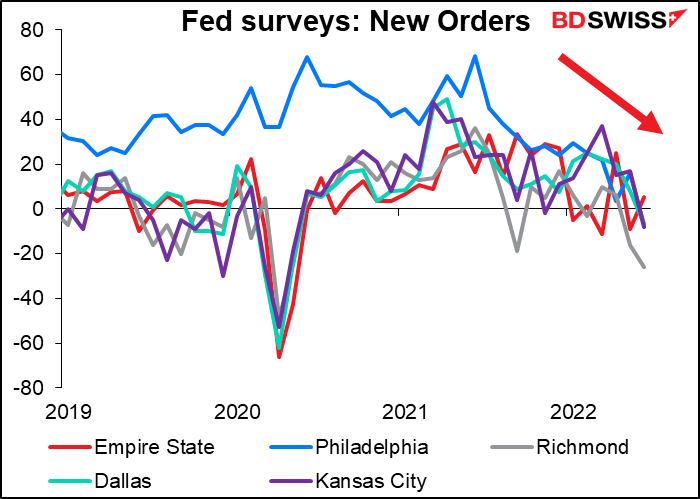 The dollar does move on the ISM index, although the impact seems to fade fairly quickly. 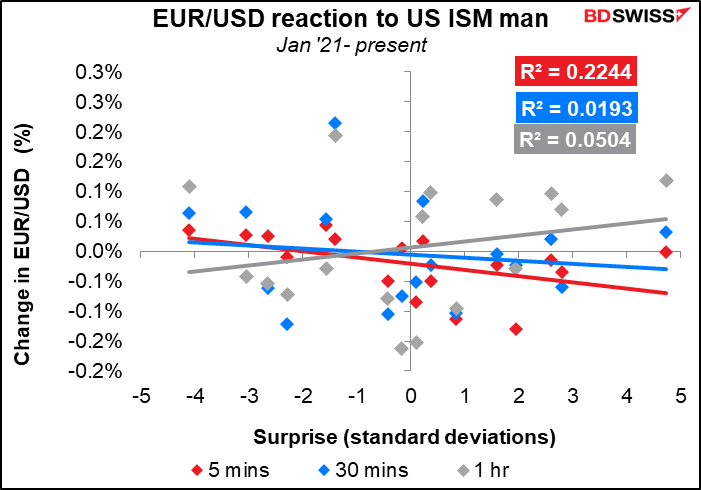 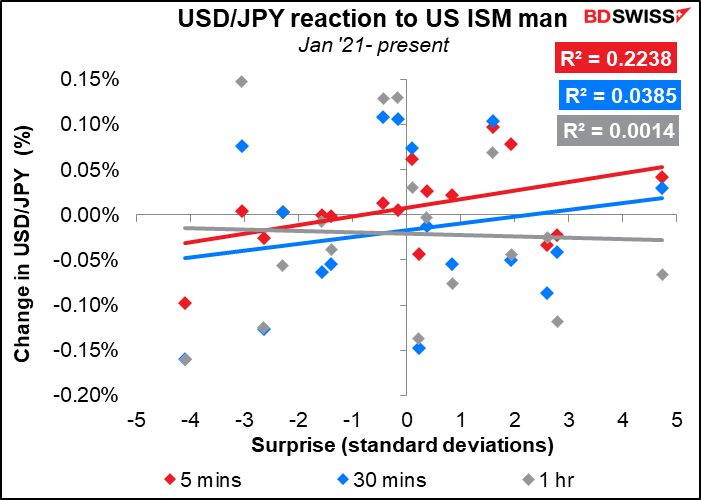 The Eurozone-wide consumer price index (CPI) is coming out. Wednesday’s German CPI surprised on the downside (8.2% yoy vs 8.8% expected, 8.7% previously) but that was probably because the government reduced fuel taxes and public transport prices for three months. This policy-related fall in prices should reverse in September when the taxes go back to normal. Furthermore, the downside surprise in Germany contrasts with an upside surprise in Spain, where the HICP jumped to 10.0% yoy from 8.5% (8.7% expected). France also saw a big increase in its HICP to 6.5% from 5.8%.

Putting all of those into an econometric model based on the data from the beginning of the Eurozone until just before the pandemic started, I get an estimate of 7.6% yoy for the Eurozone-wide figure, vs the market’s forecast of 8.5%. If I’m right or even near right – and of course there’s absolutely no guarantee of that – then the news is likely to be negative for the euro. 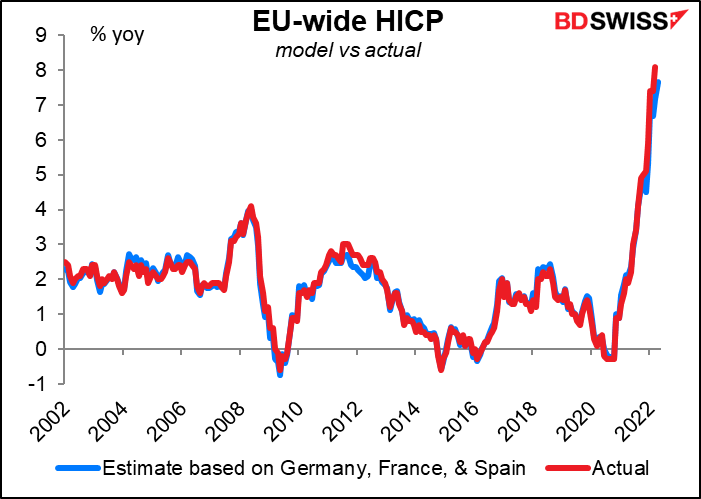 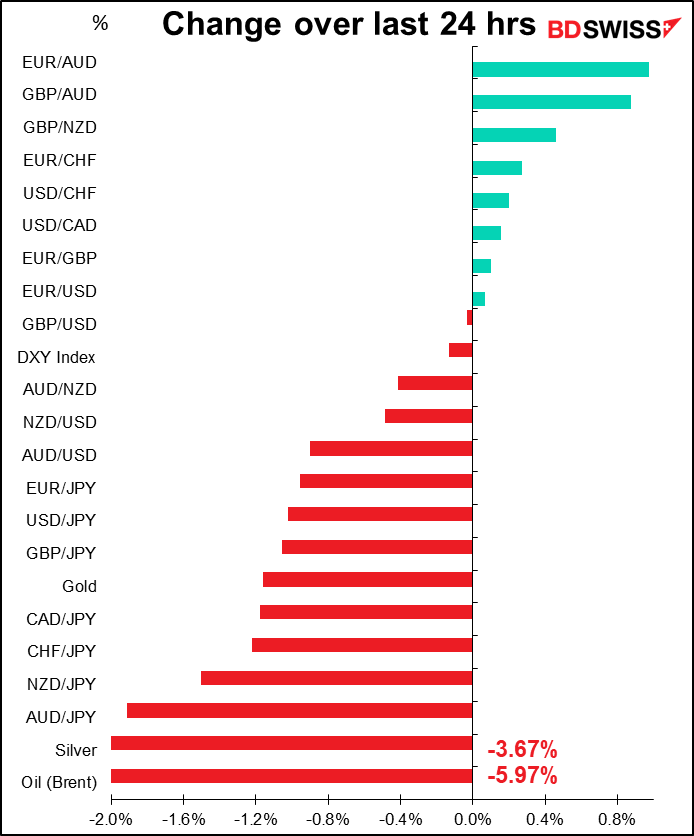 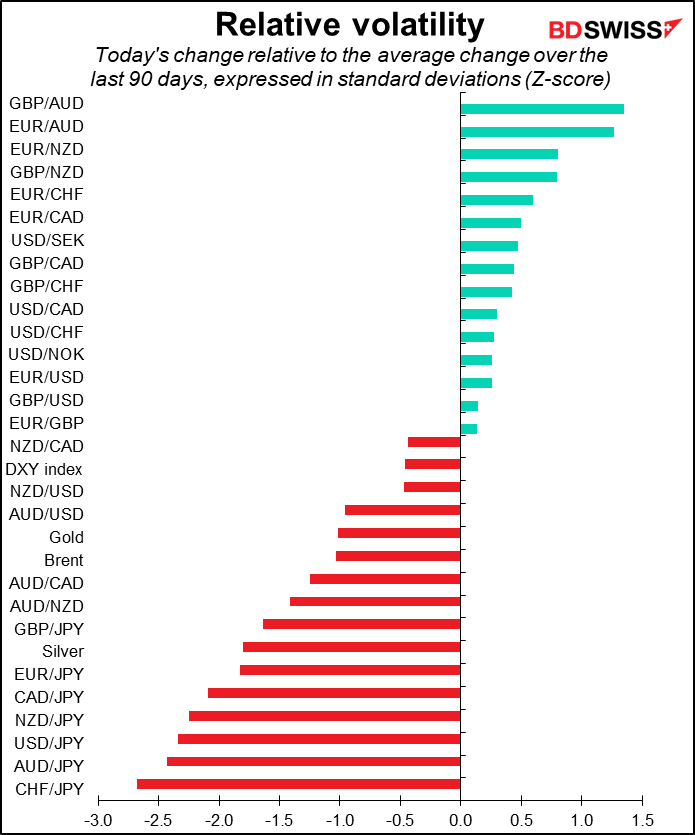