The bond market and interest rates continue to dominate the financial markets’ attention. Following Friday’s blowout nonfarm payrolls figure, which showed an increase in jobs nearly twice what was expected (+379k vs +200k expected, and that’s after a drop in government employment – private payrolls were up +465k), the fed funds market is now pricing in nearly a full hike in rates by the end of next year and chances of another by the end of 2023. As a result, 10-year US treasuries ended the week up another 16 bps. 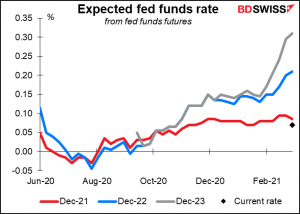 Oil was the main story this morning after one of Saudi Arabia’s major oil facilities came under attack by drones and missiles. The Saudi Energy Ministry said a storage tank in Ras Tanura, Saudi Arabia’s major export terminal, was attacked by a drone from the sea. Shrapnel from a missile also landed close to a residential compound for employees of Saudi Aramco, the national oil company, in a town close to Ras Tanura. Production appears to have been unaffected though so I question how long this knee-jerk reaction will last. The price seems to be starting to come off already. The market’s concern seems to be more the frequency of attacks rather than their severity; last week, the villains involved claimed to have hit an Aramco fuel depot elsewhere in the Kingdom. None of the attacks have caused any substantial damage, though.

It’s hard to pin down what impact the attack had on sentiment, if any. Stocks in Asia are mixed, with some markets down sharply – Hong Kong’s Hang Seng index is -1.7% and the Philippines -1.8%, while Tokyo’s TOPIX index is -0.4% — but Singapore is +2% and Malaysia is +1.5%, so the impact was by no means uniform.

Perhaps the impact of the attack was blunted by the fact that the US Senate passed President Biden’s $1.9tn stimulus package over the weekend. The bill now goes back to the House of Representatives for a final vote before it goes to the President to sign it. The market has expected the size of the package to be cut down somewhat in order to gain passage, but it appears the Democrats have decided to do it without any Republican participation, and it looks likely to be the full $1.9tn that was originally planned (albeit without some key elements such as an increase in the minimum wage). If President Biden does sign a $1.9tn bill, that could cause another round of US growth upgrades US Treasury declines (yield rises), and more USD strength.

AUD and NZD initially moved up as trading began, but then lost the gains, but now have started to rally again. So, no clear trend. USD/JPY has barely budged this morning.

Some big changes last week! Speculators cut their long positions in EUR and JPY by sizeable amounts and increased their longs in GBP (again), CAD and NZD. AUD flipped from short to long – specs haven’t been able to make up their minds about AUD for several months now. 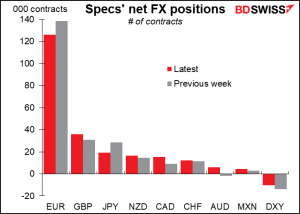 Specs added to CHF longs even though the currency has been going down – as mentioned below, it’s the worst-performing currency so far this year. It’s a mystery to me why they added to CHF longs while cutting JPY longs – seems contradictory. There’s more selling left to go just to get their positions down to neutral, not to mention as short as they were in 2018. 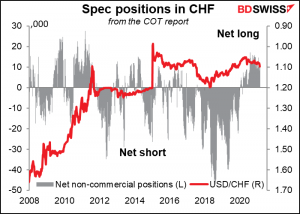 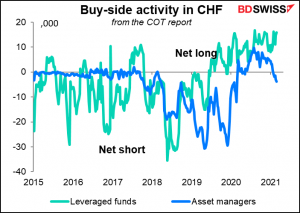 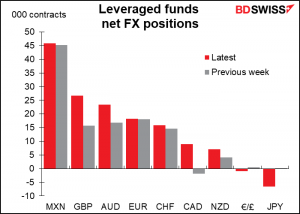 Asset managers have started to reduce their long JPY positions but are still historically long JPY, perhaps thanks to the stellar performance of the Japanese stock market this year (up 5.1% YTD in local currency terms, vs +2.3% for the S&P 500). I can easily envision them hedging their positions as JPY weakens, thereby accelerating the downturn. 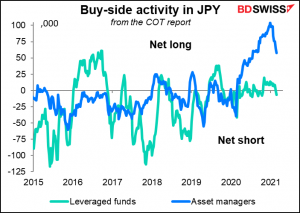 Speculators cut their long positions in both gold and silver. 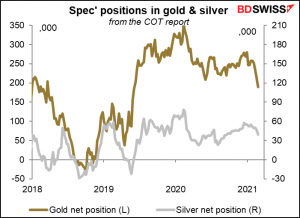 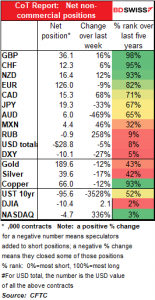 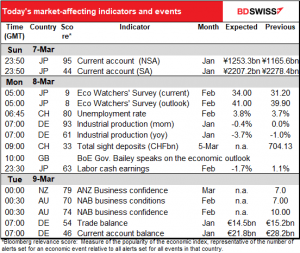 Most of the excitement for today is over already. We had the German industrial production data, which was much worse than expected, a negative sign for growth in the Eurozone.

Not much on the schedule for the European day. Bank of England Gov. Bailey is scheduled to speak. Several Monetary Policy Committee members have spoken about the Bank’s need to be able to implement negative interest rates if it becomes necessary. He’s likely to say so too, and no matter how much he stresses that this is just a precautionary measure, the market is likely to take it as preparing for that day and the pound could get sold. Although the pound seems to be getting sold already, so there could on the contrary be a bounce-back afterwards – the typical “buy the rumor, sell the fact” response. We’ll have to see how far it moves ahead of the speech.

Currently the overnight index swap (OIS) market does not foresee any change in rates at all over the next year; the February 2022 implied rate is 0 .07% vs the effective rate today of 0.05%.

The only other thing out during the European day is the weekly Swiss sight deposits, which haven’t been that interesting recently. They do show that CHF is managing to fall all by itself without any help from the Swiss National Bank. 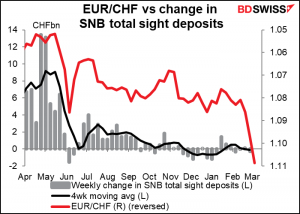 It’s been the worst-performing of the G10 currencies so far this year – a far cry from its usual performance. And looking at the Commitments of Traders report above, it seems that there are still a lot more potential sellers who’ve yet to capitulate. 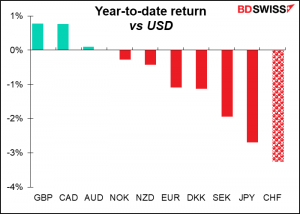 Overnight we get Japan’s labor cash earnings. Last month’s figure was disastrous thanks to low winter bonuses and a slowdown in the growth of unscheduled pay. This month is expected to be bad but not quite as bad. 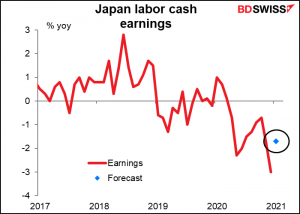 There’s no forecast for the Australia New Zealand Bank business confidence survey, but it often moves the market anyway, so here’s a graph so you can see the recent trend. No extra charge. 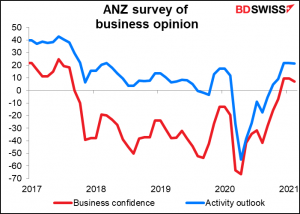 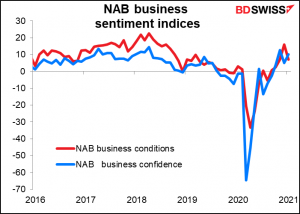 Then as Europe wakes up to yet another Tuesday, Germany announces its trade and current account figures for January. It will be interesting to see how the first month of Brexit affected German trade. Hahahaha! Just kidding! The UK accounts for 5.9% of Germany’s exports and 3.7% of their imports – 4.9% of their trade overall. A 20% reduction in Germany’s exports to the UK would be a 1.2% reduction in their overall exports – not nice, but since the monthly change in exports since 2014 have ranged from -30.5% mom to +22.1%, this is well within the normal range of fluctuations. In other words, it wouldn’t even show up on the graphs as anything unusual. Not necessarily the other way around though – Germany accounts for 10.2% of UK exports (almost double what the UK takes of Germany’s exports) and 12.3% of UK imports, 11.5% of total trade. 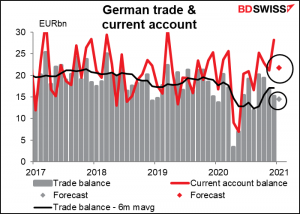 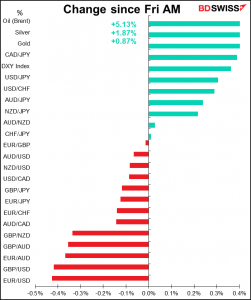