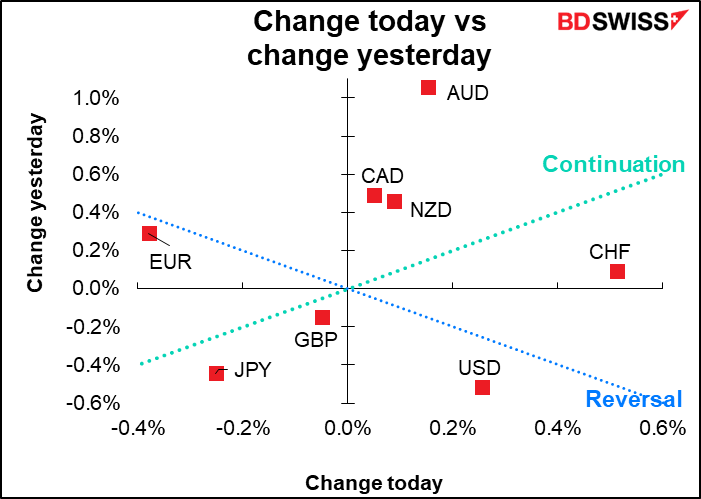 CHF leads the pack this morning, along with USD. Is this a rush to safe-havens? Then why is JPY lower, with USD/JPY at a six-year high (since Jan. 2016)? I’m at a loss to explain the move.

Adding to the mystery is that EUR/CHF seems to have fallen in line with the rising stock market. Why would EUR/CHF fall as risk sentiment improved?

I wonder if this was perhaps just traders testing to see what the Swiss National Bank (SNB) would do. Perhaps when they found they were pushing on an open door they kept pushing.

It’s especially strange given the good performance of AUD. AUD/USD briefly went over 0.74 this morning for the first time in a few weeks.

Perhaps what we are looking at is not so much CHF strength as EUR weakness. My guess is that people are positioning for a longer, more drawn-out war in Ukraine as the fighting hits a statemate and EUR is weakening as a result. Investors selling EUR are more likely to sell EUR/CHF than EUR/JPY. You can see how the two pairs moved in tandem during the European morning Friday but then began to diverge notably, with EUR/JPY drifting higher but EUR/CHF moving still lower.

Some huge changes this week! Mostly in favor of the dollar. Total dollar positioning increased by $3.9bn or 75%.

First and foremost was the large reduction of 40.1k contracts in EUR. This was the largest decline since June 2018 and the fourth-largest decline in data going back to 2003 (the whole series goes back to 1999 so I may have missed a few). That’s about $5.5bn.

That was outdone by MXN (in terms of number of contracts, not value), which flipped from long 53.0k contracts to short 10.6k. And GBP shorts increased.

On the other hand, AUD shorts fell by 33.3k contracts or 43% and NZD flipped from short to long. CAD longs also rose. So specs grew more optimistic about the commodity currencies. 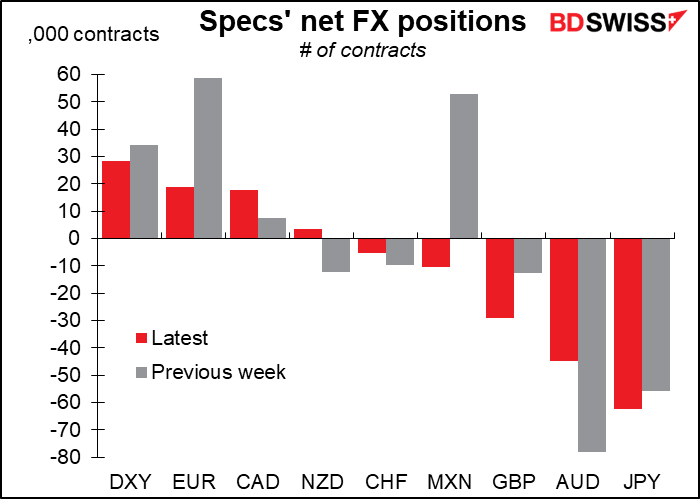 I don’t include RUB, ZAR, or BRL in my calculations as these currencies are not of great interest to our clients, usually. But nowadays RUB may hold some morbid fascination. Interestingly enough, speculators remain long RUB. 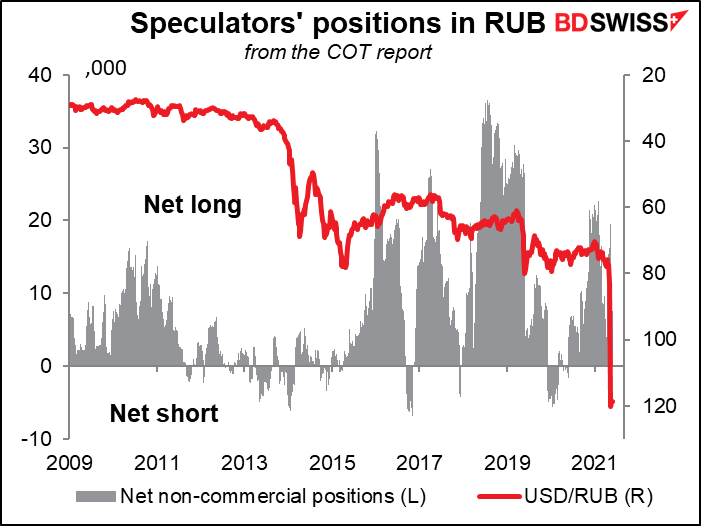 Hedge funds remain long RUB too, as do asset managers (not shown). They both cut their long positions a bit over the latest week but not by much. That’s odd because I would think most of the asset managers have gotten rid of their underlying RUB assets. Maybe they think that the currency will come back and they can sell at a better level later. Maybe they simply can’t close out their positions. 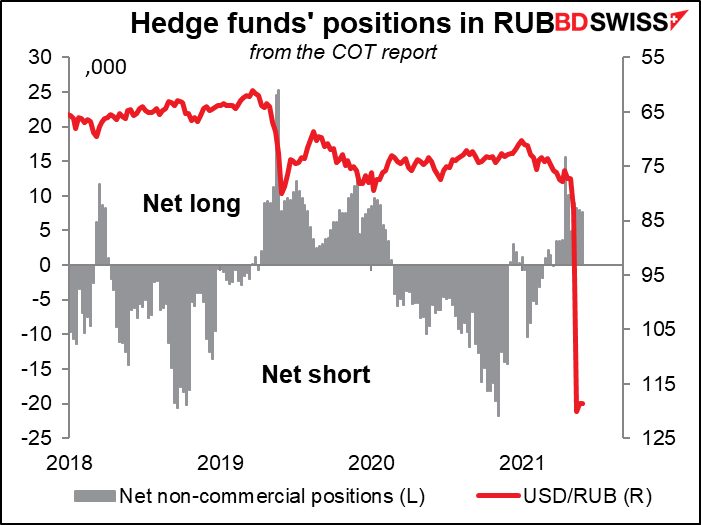 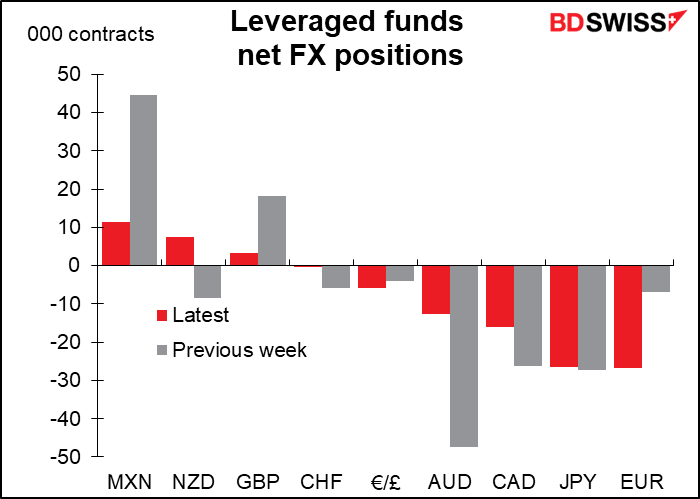 Retail was relatively inactive. The only major change was flipping from long CAD to short CAD. Also increasing JPY shorts. 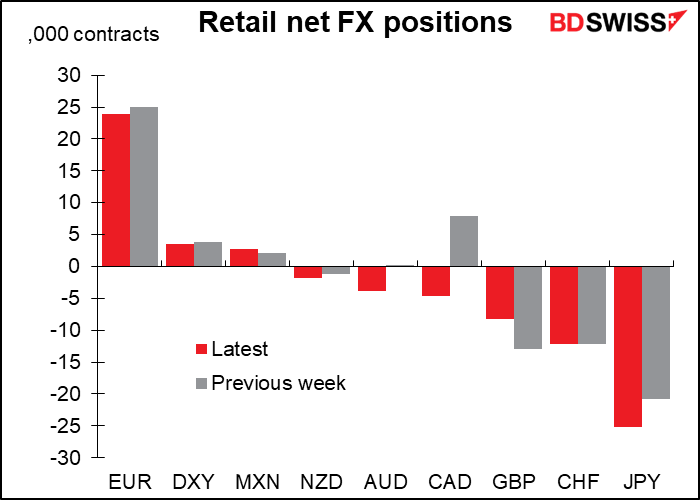 Specs weren’t very active in precious metals. They trimmed their gold longs a bit but didn’t do much in the silver contract. 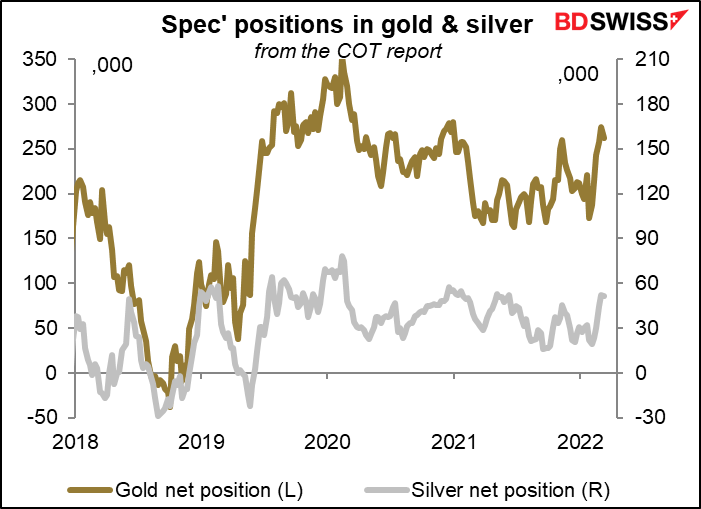 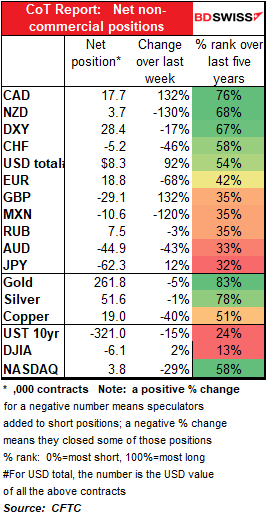 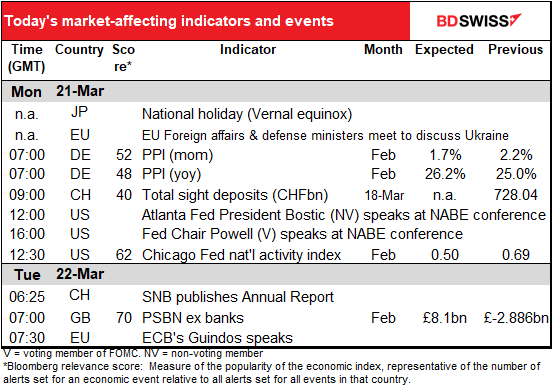 There’s a meeting today of the EU Foreign Affairs Council. According to their announcement, the council “will meet in three successive configurations (foreign affairs ministers only, foreign affairs ministers and ministers of defense jointly, and ministers of defense only) to discuss the Russian aggression against Ukraine, the situation in Mali and the Strategic Compass.” I assume that the discussion of the situation in Mali (which I’ve been to, by the way – interesting country!) will be relatively brief. (The Strategic Compass is a joint defense initiative for the EU. If you’re curious, you can read about it here. It won’t help with your FX trading though.)

The European day kicks off with the usual Swiss sight deposits. Last week we did see some “supernatural activity” in the market. Remember that on March 7, the Swiss National Bank (SNB) issued a statement saying, “The Swiss franc is currently sought after as a refuge currency, along with the U.S. dollar and the yen. The Swiss franc continues to be highly valued. The SNB remains prepared to intervene in the foreign exchange market if necessary.” It looks as if it was necessary as in the week to March 11th they appear to have intervened heavily, the most so far this year (in fact almost as much as during the weeks previously – CHF 2.37bn vs CHF. 2.90bn so far this year up to the week before). We’ll see today whether they kept it up. The movement of EUR/CHF suggests they might have. 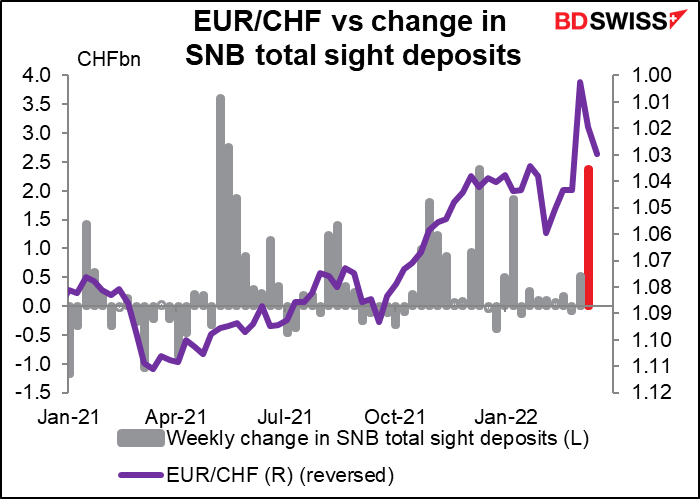 The National Association for Business Economics (NABE) (not to be confused with the National Association for Bilingual Education) holds its annual conference today and tomorrow. The topic is “Policy Options for Sustainable and Inclusive Growth.” Today’s speakers include Fed Chair Powell and Atlanta Fed President Bostic. There are a lot of other luminaries on the schedule, such as former Bank of England Gov. Mark Carney and various US government and BIS officials. Powell gave a press conference just last week but he may still have something interesting to say.

The Chicago Fed National Activity Index (CFNAI) is different from the other regional Fed indices. It’s designed to gauge overall economic activity and related inflationary pressure on a national basis, not regional. It’s comprised of 85 existing monthly indicators of national economic activity. A positive index reading corresponds to growth above trend and a negative index reading corresponds to growth below trend. However it’s difficult to interpret any one number because the figures are so volatile. On the graph I’ve cut out some months during the pandemic when it was especially volatile. Today’s reading is expected to show still-strong growth at about the trend level, so no cause for concern. 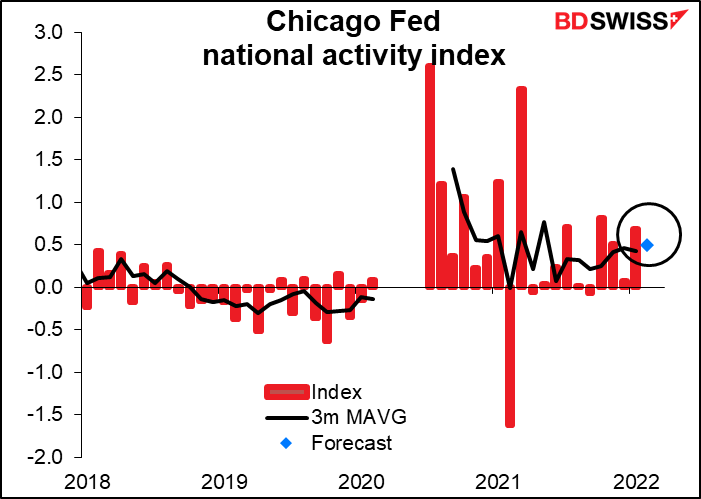 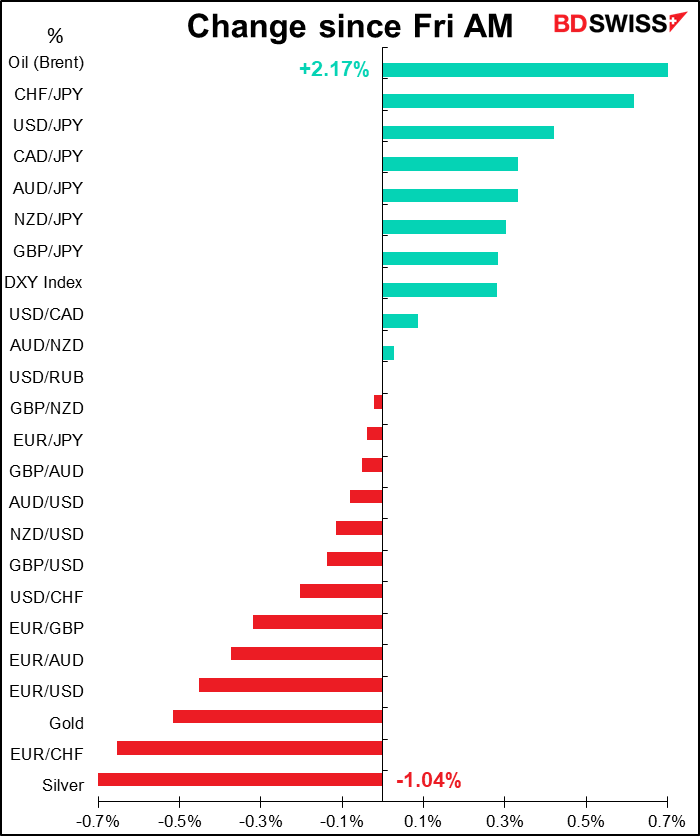