You are at:Home»Market Preview»USD Up, JPY Down as Brainard Comments Spur Surge in US Rates; FOMC Minutes 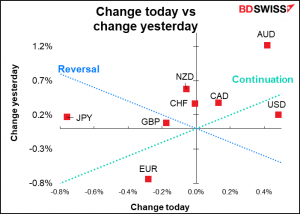 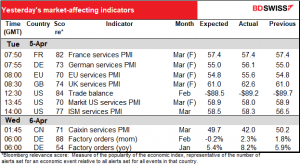 Fed Gov. Brainard’s speech was the main focus of attention yesterday. She called for a “rapid pace” of balance sheet reduction at the Fed.

“It is of paramount importance to get inflation down. Accordingly, the Committee will continue tightening monetary policy methodically through a series of interest rate increases and by starting to reduce the balance sheet at a rapid pace as soon as our May meeting. Given that the recovery has been considerably stronger and faster than in the previous cycle, I expect the balance sheet to shrink considerably more rapidly than in the previous recovery, with significantly larger caps and a much shorter period to phase in the maximum caps compared with 2017–19.”

(Caps = how much they allow the balance sheet to shrink every month.)

During the 2013/2019 cycle they reduced the balance sheet by 16% over two years before suddenly stopping as they started cutting rates again. 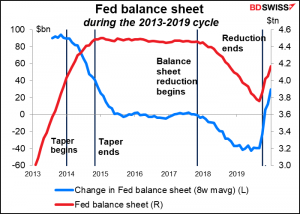 Her comments hit global bond markets hard, with US 10-year yields rising 15 bps to 2.55% during US trading, the highest level since April 2019 and the largest one-day rise in the 10yr yield since the Covid-induced volatility in March 2020. They’ve risen a further 8 bps since the US close! The sharp rise suggests that the market may have assumed that her scenario could encompass not just allowing maturing bonds to run off but even actively selling bonds to shrink the balance sheet. 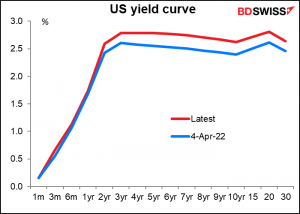 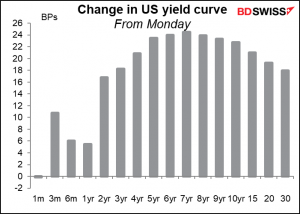 The comments sent yields of most countries’ bonds higher, with Japan of course being the laggard as its 10-year yields are straitjacketed by the Bank of Japan’s yield curve control (YCC) policy.

Inflation expectations also rose, although by nowhere near as much as bond yields did. 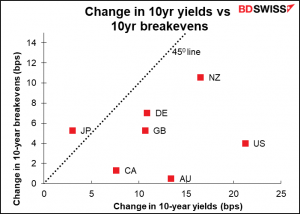 USD was boosted by the sharp rise in US real yields as well as further rises in the assumed pace of Fed tightening. The fed funds futures are now pricing in an 83% chance of a 50 bps move at the next meeting in May and a total of 220 bps of further rates hikes this year (on top of last month’s 25 bps hike). This would be the largest amount of Fed tightening in a single calendar year since 1994, when the Fed hiked 250 bps. 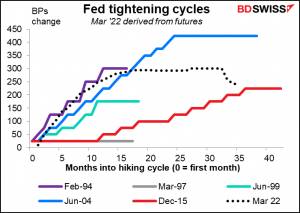 EUR on the other hand fell, including on the crossrates, as the European Commission proposed a new package of sanctions against Russia, including measures to ban coal imports and to stop Russian vessels from entering EU ports, although with some exemptions including for energy. Note though that the package does not include gas, a much larger source of energy revenue for Moscow. 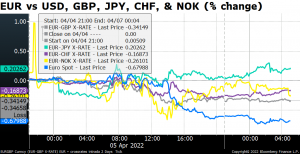 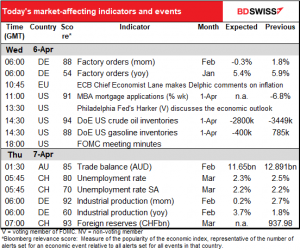 Not much going on during the European morning. We already had the German factory orders.

ECB Chief Economist Philip Lane will participate in a panel on inflation dynamics a the Delphi Economic Forum in Greece. He can now legitimately be criticized as speaking Delphicly! (We economists have to take every opportunity for what passes as jokes in our field.) He could say something of interest with regards to the outlook for inflation and the ECB’s likely policy response.

We’re also going to hear from Philadelphia Fed President Harker, who’s voting on the Federal Open Market Committee (FOMC) on behalf of the Boston Fed, which is without a president at the moment after Erice Rosengern abruptly retired last September in the wake of a trading scandal. Harker doesn’t speak very often, although he did make some comments as recently as March 29th. At that time he said he was looking for a series of “deliberate, methodical” increases in the fed funds rate this year. That implies no 50 bps hikes, which the market is pricing in. Has he changed his mind recently? Tune in and find out!

The main feature of the day will be the minutes of the FOMC’s March 16th meeting. At that meeting they decided to hike rates by 25 bps, the first hike since December 2018. I think the Committee’s reasoning behind that move was pretty clear and doesn’t need much exegesis. Instead the focus will be on their plans to wind down their balance sheet, which has more than doubled to around $9.0tn from $4.2tn before the pandemic. (The unwinding of their quantitative easing is naturally referred to as quantitative tightening or QT.) Gov. Brainard’s speech yesterday has only added to the importance of any details we can glean from the minutes. 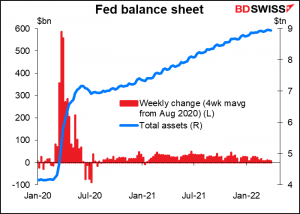 In his post-meeting press conference, Fed Chair Powell said that the Committee had discussed the plans extensively. He didn’t reveal any details but did note that the framework that the Committee had discussed would be equivalent to around 25 bps of additional monetary tightening this year. There are a lot of technical questions that people would like to know about the process, such as :

These sorts of questions are crucial for the bond market but I’m not sure how much the FX market will be affected by this sort of detail. The main thing for FX market participants will be the pace and extent of the shrinkage, which will determine how much additional tightening it achieves. The split between Treasuries and MBS may also be important, given the impact of MBS on the housing market.

Overnight we get the Australian trade data.  The trade surplus jumped by AUD 4.1bn in January to AUD 12.9bn, almost hitting the record high of AUD 13.3bn achieved last  July. It’s forecast to be down a bit in February, which is strange given that the Westpac Australian export commodity index was up a substantial 10.1% during the month. 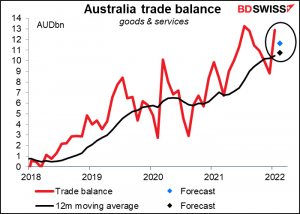 I would guess that the market is assuming imports rise again after their slight dip in January. There may also be some measure of seasonal pattern in it, as the 12m moving average would move slightly higher on this forecast. 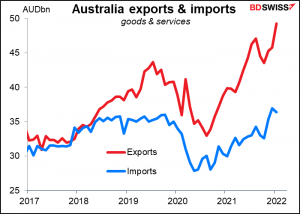 Market participants interested in taking a position around these figures might want to consider using AUD/NZD rather than AUD/USD. Neither has a particularly close reaction to the figure, but AUD/NZD seems to have a slightly better response, judging from the slightly higher R-squared figures. But I’m not sure whether figures this low are even significant. It’s noticeable though that the highest figure is for AUD/USD after one hour, which suggests that it may just take some time for the market to respond to the data. (However neither pair shows a particularly good relationship after six hours.) 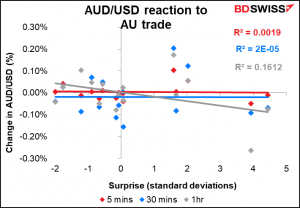 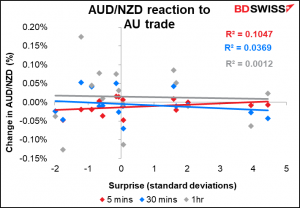 Then as day breaks over the Alps, Swiss unemployment is expected to be unchanged on a SA basis and down somewhat on an NSA basis, which seems to be the one that the market pays more attention to. 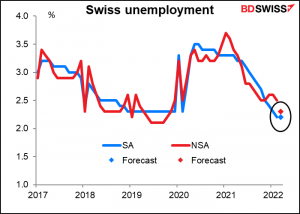 Swiss foreign reserves are also being announced but as I point out every month, these are not as reliable an indicator of FX market intervention as the weekly Swiss sight deposits are because of valuation effects. Anyway no forecasts are available. It does appear though that the reserves have peaked – they hit CHF 946.7bn in January and fell to CHF 938.0bn in February. But of course that 0.9% fall in the value of the reserves could be due to the 1.1% fall in the value of the dollar vs CHF during the month. Yesterday’s sight deposit figures showed the SNB resuming large-scale intervention, but that was the data for April 1st – I’m not sure if it will show up in the March figures. 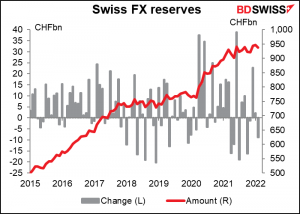 Finally, German industrial production is expected to be up only slightly after January’s sharp rise. The February report probably won’t reflect the impact of the war in Ukraine on activity so it’s not a good indicator of future trends. 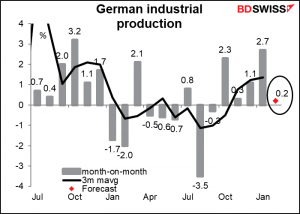 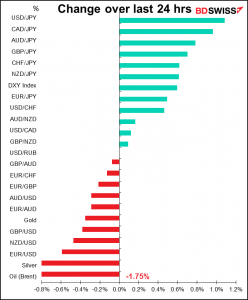