You are at:Inicio»Market Preview»JPY Up, CAD Down on New Virus Variant; German CPI, Japan Unemployment 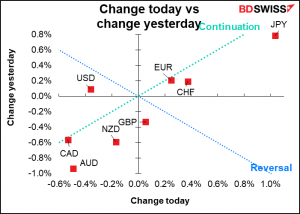 As on Friday it all comes down to the Omicron variant of the virus. What we learned over the weekend was twofold:

Nonetheless countries are taking no chances and international travel has been severely curtailed, with several countries closing their doors to all visitors (Israel, Japan).  EG all travelers coming into (or back to) the UK will have to self-isolate until they get a negative test. This kind of restriction will reduce travel and thereby cut into demand for oil.

The movement in currency markets was fairly obvious: JPY up on risk aversion, CAD down as oil prices plunged, USD down as the odds that the Fed would speed up its tapering and start hiking rates in May and maybe even have a second hike in June receded. 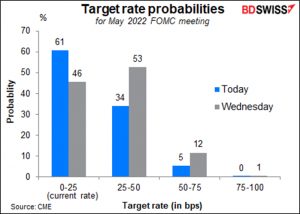 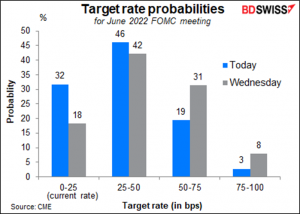 The bellwether for the markets on this occasion may be the South African Rand (ZAR), as the new variant is identified with South Africa (although this may be just an accident – it looks like they were simply the first to discover it).

It’s pretty much followed the US stock market, or the stock market has followed it – it’s hard to tell. But in any case, they’re both telling the same story – risk sentiment is gradually returning this morning.

On Friday, AUD/JPY pretty much tracked USD/ZAR. This morning however the two are diverging notably, even as the S&P 500 recovers.

Gold too is continuing to show signs of risk aversion this morning.

Although most Asian stock markets are lower this morning, I think the panic may be overdone. From what I understand, this new variant is not that fearsome even if it is easily transmitted. Accordingly I would expect risk appetite to return and AUD/JPY, oil, and CAD to recover gradually, although as I’ve stressed many times before I’m an economist not an epidemiologist so I have no expertise in this field.

Implied volatilities rose almost across the board over the last week (except for AUD/NZD). JPY vols rose particularly sharply as risk aversion sent JPY up sharply (USD/JPY down). 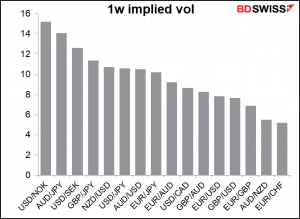 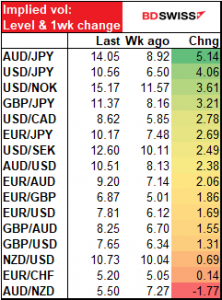 The table below gives the likely range for currencies for the next week, based on option prices. 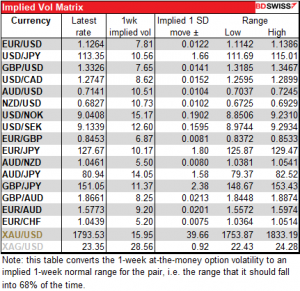 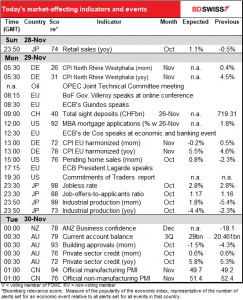 Sometime during the day there’s a meeting of the Joint Technical Committee (JTC) of OPEC+. The JTC is a group of oil market experts who meet a few days before the OPEC+ meeting to review the latest oil market developments and discuss prospects for the market. They then prepare advice for the Joint Ministerial Marketing Committee (JMMC), which makes recommendations to the full OPEC+ meeting. Their meeting is a regular step before the monthly OPEC+ meeting. “Joint” in this case refers the 14 OPEC members and the 10 non-members, such as Russia and Mexico, that have joined together in a loose coalition. Their forecast for the market supply & demand balance in 2022 is likely to have a strong bearing on whether the market decides to stick to the plan to increase production by 400k barrels a day (b/d) in December or to slow or even pause the planned increase (“reverse tapering?”)

As for the indicators, we start off as usual on a Monday Monday morning with Swiss sight deposits. No sign of the Swiss National Bank (SNB), which seems to have forgotten that it “remains willing to intervene in the foreign exchange market as necessary, in order to counter upward pressure on the Swiss franc.” As EUR/CHF crashed through 1.05 two weeks ago, sight deposits increased by a measly CHF 80mn, barely anything. A little over a year ago they were doing some CHF 4bn a week when EUR/CHF was even higher.  Don’t they care about me? Don’t they care that I have to pay rent in Switzerland when I’m paid in EUR? How can they do this to me! 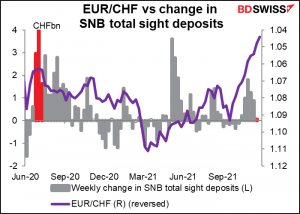 Germany’s harmonized index of consumer prices (HICP), the EU-wide version of the consumer price index, will be the focus. It’s expected to leap to 5.5% yoy from 4.6% — not a good omen 2 ½ weeks before the European Central Bank (ECB) meeting. That could be positive for the euro if people think it’s likely to sway the discussion in favor of the hawks. 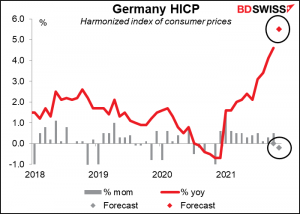 However, the year-on-year rate of change may be misleading because of what happened a year ago. If on the other hand we take the three-month rate of change and annualize it, we can see that on current forecasts it will continue its recent decline, slipping to 2.5% annualized – not far off the ECB’s 2% annual target. We could be nearing the peak for German inflation. 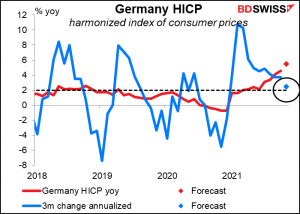 Before that, the HICP for North Rhine Westfalia, Germany’s largest state, should give us a good idea as to what the national CPI will be. No forecast available. 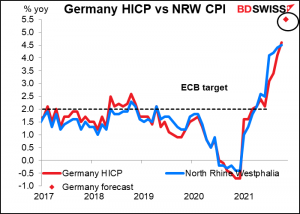 ECB President Lagarde speaks at a colloquia on science diplomacy. What’s that? I have no idea. I just make the calendar. Lagarde or any other central bank head is speaking, I have to put it in the calendar (unless they’re just making “introductory remarks” like Fed Chair Powell is doing today at an event on innovation hosted by the NY Fed. I’m sure he’ll just say something like “innovation is good and we should have more of it, that’s why we at the Fed are doing such marvelous stuff,” so I don’t bother with it.) President Lagarde will be speaking at the Accademia dei Lincei, one of the oldest and most prestigious European scientific institutions. You can watch it yourself here. Please let me know what it was about.

The weekly Commitments of Traders (CoT) report comes out tonight instead of last Friday, because of the Thanksgiving holiday.

Then overnight we get some important data from Japan. I’m not sure it moves the market – economic indicators don’t seem to have that much impact on JPY anymore, since the Bank of Japan has a lock on the bond market – but it could make some difference.

Japan’s unemployment rate is expected to remain at 2.8% for the fourth month in a row. Snore. Why does this indicator have such a high Bloomberg relevance score when it rarely changes? Although I just looked at the unemployment rates for the G10 countries and found that from Jan. 2000 to Dec. 2019 in fact Australia and Canada have a lower standard deviation (0.7 vs 0.9) than Japan, and New Zealand’s is the same, so maybe Japan’s isn’t that unusually stable. It just seems to me that there are a lot of periods like Jan. 2018-Mar. 2020 when it just moves in a narrow range, in this case 2.2%-2.5%.

Meanwhile, the world-renown job-offers-to-applicants ratio, an indicator that other countries would be well advised to emulate, is forecast to continue to creep higher. I’m rooting for this indicator as my older daughter, currently a student in Kyoto, will start looking for a job next year.

Behind the modest improvement is the fact that the so-called “state of emergency” was lifted on Oct. 1st and economic activity has gradually returned to normal, meaning more job offers, particularly in the service sector. 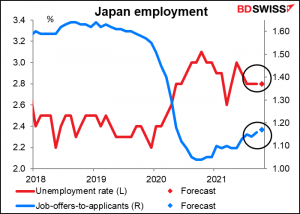 Industrial production is expected to be up on the month following three months of decline. Nonetheless the expected 1.8% mom increase would be a mere bagatelle compared to the cumulative 10.1% fall in output over the preceding three months. (Question: what’s a bagatelle? And why is it always a “mere” bagatelle? I had no idea so I looked it up. It’s quite an appropriate word for matters concerning Japan – it’s a French word for a game like pachinko. 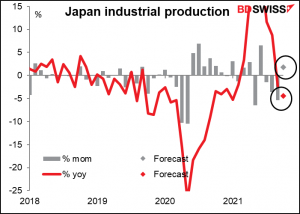 The Japanese supply chain, particularly semiconductors, remains stressed and as a result Japan’s IP won’t be able to recover completely for some time. Auto production for example was down 41% yoy in September. 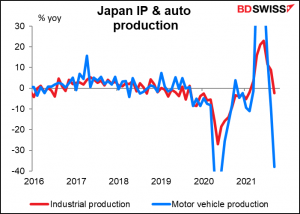 In this Japan will be in line with Germany, although not in line with the US or the UK or even the Eurozone as a whole. 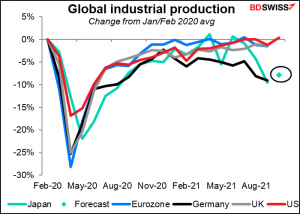 Then comes several Australian indicators, with building approvals being the main one. They’ve been dragging ever since the HomeBuilders subsidy ended in April. 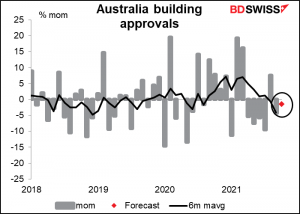 The Q3 current account balance is expected to rocket to a record high, boosted by higher commodity prices & volumes. I’m not sure it’s so important though. Probably the October trade data, due out Thursday, is more important. 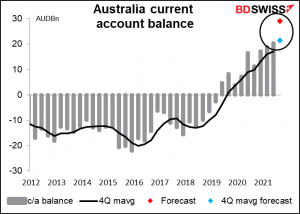 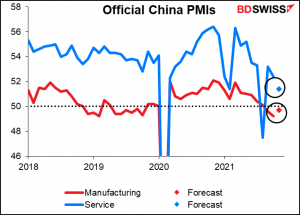 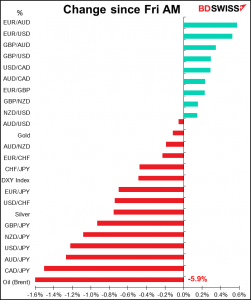