You are at:Inicio»Market Preview»JPY & USD Up, EUR Down; Quiet Day Ahead 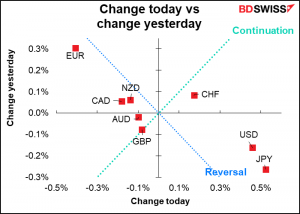 Financial markets were shaken on Friday by two things.

One, three voting members of the rate-setting Federal Open Market Committee (FOMC) said they thought there was a case for accelerating the planned tapering-down of the Fed’s monthly bond purchases. Currently they’re planning on reducing the $120bn-a-month purchases by $15bn a month, aiming to end them next June. However, Fed Vice Chair Clarida, Gov. Waller, and St. Louis Fed President Bullard all said they wanted “to have a discussion about increasing the pace at which we are reducing our balance sheet” at their Dec. 15th meeting. Waller said he wanted to end the purchases in April, Bullard said March.

As a result, the odds of an early rate hike in the US have increased. That’s positive for the dollar. 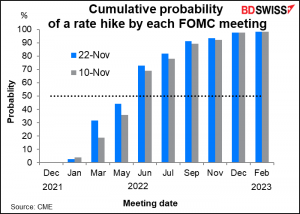 The odds of a May rate hike increased noticeably, although the market still thinks it’s better than 50—50 that rates are unchanged in May. June is still the favourite. 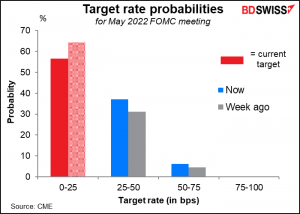 Secondly, Austria said it would go into full lockdown. The country’s anti-virus measures have been pretty much around the average for the Eurozone so far this year, but now they’re set to be much more stringent. Is this a harbinger for what’s to come for the other countries? 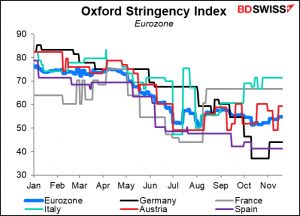 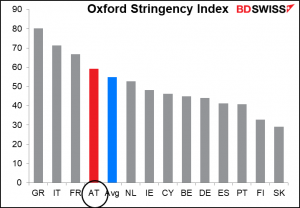 Austria’s virus problem is much worse than average for the region, so the answer is probably: not yet. But it could be as other countries are also seeing their caseloads increasing, some alarmingly. The Netherlands for example is not far behind Austria with 1,158 new cases per day per 1mn people, vs 1,513 for Austria (Eurozone average is 645, which is more than 3x what it was at the beginning of the month.) 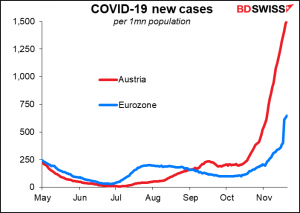 Austria is below the average for vaccinations within the Eurozone, but not by much (66% vs 74%). 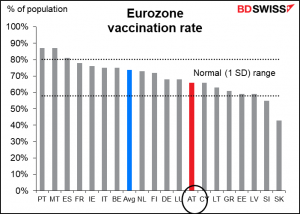 Europe’s vaccination rate is top of the G10 charts, so while more people could be vaccinated, probably everyone who wants to be vaccinated in these countries is already. Experience suggests that only lockdowns are left to control the virus. That’s bad for economic activity, meaning the European Central Bank will have to keep rates lower for longer than it would otherwise, which is negative for EUR. 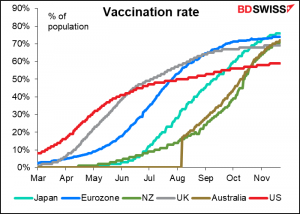 (If you’re looking to go on holiday in Europe this Christmas, I’d suggest Portugal or Spain rather than Slovakia or Greece. Portugal and Spain have relatively high vaccination rates and low lockdown measures.) 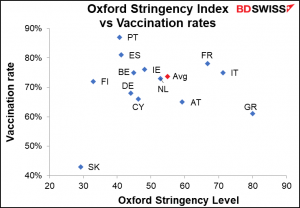 Oil fell sharply as the odds of a coordinated release of oil from national stockpiles. Reuters reported last week that US President Bide was talking with China, Japan, and other countries about releasing crude from their strategic stockpiles. Japanese TV Monday reported that Tokyo is preparing to go along with the request, although it didn’t say how much would be released.

Investment Bank Goldman, Sachs last week estimated that the US would release 20mn-30mn barrels from its Strategic Petroleum Reserve (SPR) and that other countries could release a combined 30mn, but that the decline in prices already discounts the release of some 100mn barrels. “Such a release would only provide a short-term fix to a structural deficit,” the bank warned. (Is it churlish of me to note that back in 2008, when oil was trading around $140/bbl, GS forecast that it would soon go to $200/bbl? It subsequently went up to around $145, then collapsed with months to $34. That doesn’t mean they’re necessarily wrong this time, but it does demonstrate that they can be wrong and we shouldn’t just believe whatever they say.

Still, 30mn barrels is less than one day’s OPEC output. US oil inventories have fallen by 52mn barrels this year so adding 30mn barrels would just bring inventories back up to their average level for this time of year.

The lockdowns in Europe are probably a bigger threat to the oil price as more lockdowns = less movement = less demand for oil. That’s also pressuring the price. 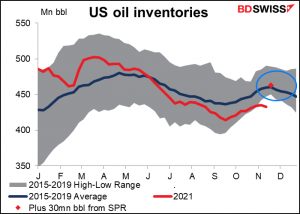 I needn’t go into detail on how the plunge in oil prices affected CAD.

Sunday it was announced that President Biden will give a speech Tuesday on the economy and combating inflation. He could announce something in that speech about releasing oil from the SPR and possibly announce his decision for Fed Chair. Biden has said he’ll announce his decision before Thursday’s Thanksgiving holiday. I think if he announces a release from the SPR, it will be a “sell the rumour, buy the fact” moment and oil prices are likely to rise, unless of course he says they will release more than 30mn barrels.

Extraordinarily little net change in the overall positioning of speculators over the last week, mostly because the changes by and large cancelled each other out. Specs flipped from long EUR to short EUR in response to the weakening EUR and increased their short GBP positions (maybe explaining some of GBP’s sharp move up later in the week as they closed out these positions – we’ll find out next Monday), but on the other hand they trimmed their short CHF and JPY positions so at the end of the day their net USD position was only down a little. 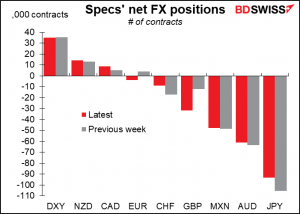 Hedge funds switched from long GBP to short – oops! Elsewhere they seemed to be negative on the dollar — they trimmed their CHF, CAD, AUD, and JPY shorts but increased their EUR shorts (good call!) They also increased their NZD longs a bit ahead of this week’s RBNZ meeting. 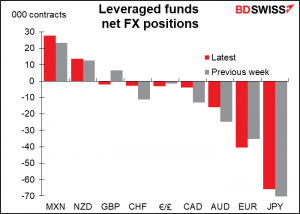 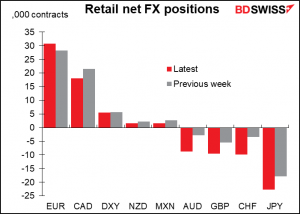 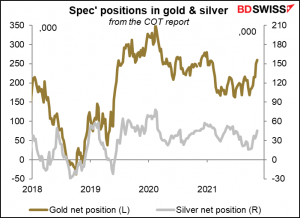 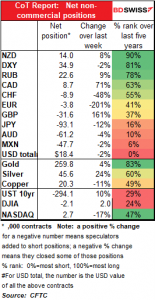 This is really a two-day week. Everything worth noting will happen on Tuesday and Wednesday. The rest of the days are pretty sleepy. Like today, for example.

There’s clearly been a change of strategy at the Swiss National Bank (SNB). Swiss sight deposits just aren’t going up the way they used to when EUR/CHF previously hit these levels. Last week’s “effort” was pitiful! Given the sharp decline in EUR/CHF this past week, I suspect it’s not going to be much more. They appear to be in a “smoothing” operation rather than a “line-in-the-sand” operation. 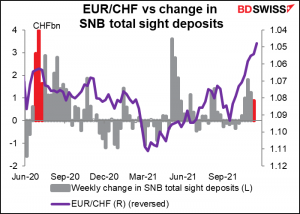 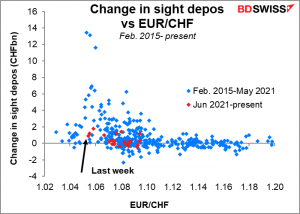 Eurozone consumer confidence has bounced back after plunging when the virus hit. Recently it’s been creeping lower. 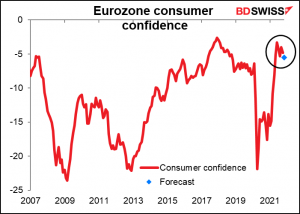 No surprise there as the virus is worsening and countries are facing lockdown again (see above). 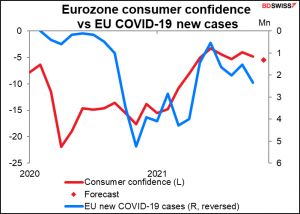 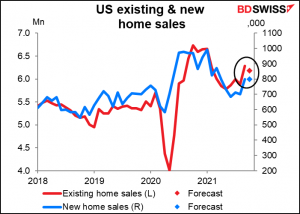 Ordinarily I wouldn’t bother with New Zealand retail sales, but I’ve got so little content for today’s comment, I thought, why not? It’s forecast to collapse, but that’s no surprise since obviously people can’t go shopping during a lockdown. It’ll just bounce back in Q4, as it did in Q2 and Q3 last year during the first lockdown. 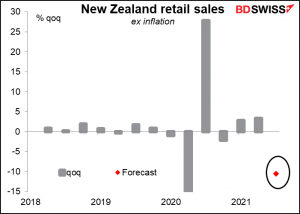 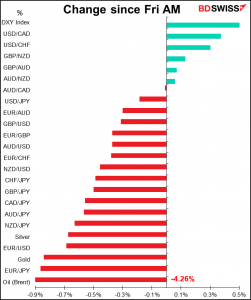