You are at:Home»MARKET PREVIEW»Vain hopes for Fiscal Stimulus in US Result in “Risk-on” Mood; Speeches, UK Employment tomorrow AM 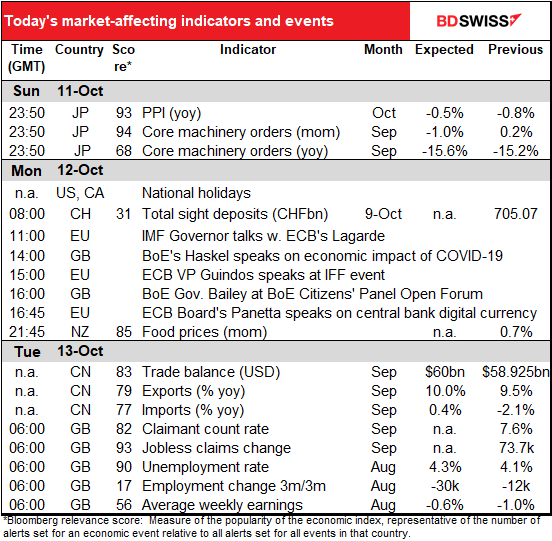 While Trump puts a brave face on it, he doesn’t seem to be doing well. He didn’t sound great when he spoke from the White House balcony on Saturday. He only talked for 17 minutes vs the 30 that he was scheduled to talk for – when has he ever stopped talking early before? His lack of stamina suggests that his pneumonia hasn’t improved much. He was still having difficulty breathing even though he’s taking steroids. (There are unconfirmed rumors he’s still receiving supplementary oxygen.) It’s clear he’s not “cured,” nor is he out of danger for a relapse. I suspect he’s sicker than they’re admitting publicly.

Moreover, he’s nearing the end of his course of steroids (if he hasn’t already stopped them), which will have a huge impact on his system. Many doctors and nurses have commented on Twitter about how bad the crash is going to be from the dose of Dexamethasone that he’s on.

He’s scheduled to speak this evening at a rally in Florida. It will be interesting to watch how he does. It’s difficult to see how he will keep campaigning once he’s finished with the steroids.

It’s a typical “risk-on” market that doesn’t need much explanation. Hopes for some progress on the fiscal aid talks in the US boosted spirits during US trading Friday and we had a typical reaction in all markets. The S&P 500 closed at its highest level since 2 September. The dollar finished at a three-week low and gold finished at a three-week high.

Trump’s hopeless attempts to get the two sides to agree to a large package – even larger than what the Democrats have been suggesting – is nothing more than political theater as there’s no hope the Republicans will go along with it. He only wants to be able to say to the voters “well I tried” and blame everything on the Democrats. The Republicans wouldn’t possibly agree to an even larger package and besides, they’re focusing on stuffing the Supreme Court during the short time that they have left.

The only anomaly in the chart is the poor performance of the euro. A few months ago, a week dollar would’ve automatically meant a strong euro – the two were mirror images of each other. But the negative correlation between the dollar’s overall movement and EUR/USD has been declining steadily. It seems to me that the European Central Bank (ECB) has been successful in its goal, described in last week’s minutes to the recent ECB meeting, “to avoid complacency and the perception among investors that the direction of exchange rate movements was a one-way bet.” 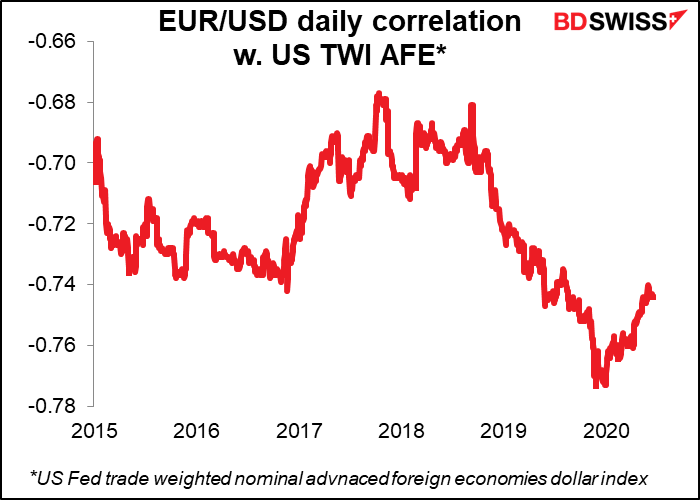 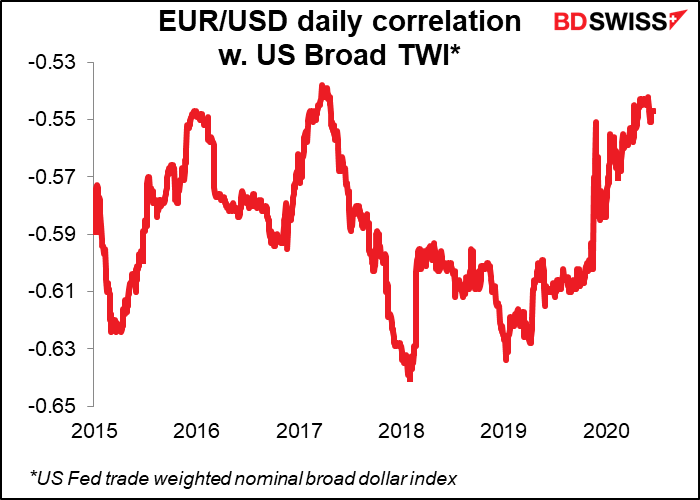 Several other currencies now have a higher correlation with the dollar’s overall movements than EUR/USD does.

NZD continues to outpace AUD despite a surge in Australian housing loan approvals in August and assurances from the Reserve Bank of Australia (RBA) that “Australian businesses and households are generally in a strong financial position.” Market participants are apparently taking profits on AUD/NZD longs.

CAD was bolstered by a much better-than-expected labor market report for September – employment was up by 378k vs 150k expected and the unemployment rate fell to 9.0% from 10.2% (9.8% expected). Schools reopening allowed many people to go back to work. It’s managed to hold most of the gains despite lower oil prices this morning.

Today’s market
Not much on the schedule during the European day, and the US and Canadian governments are on holiday, so it’s going to be pretty quiet data-wise. (The US stock market is open, but the bond market isn’t trading. Banks will probably have a skeleton staff in to trade FX.) Just the weekly Swiss National Bank (SNB) sight accounts, which aren’t that thrilling. The SNB seems to be intervening less, but it’s still intervening, as far as we can tell. 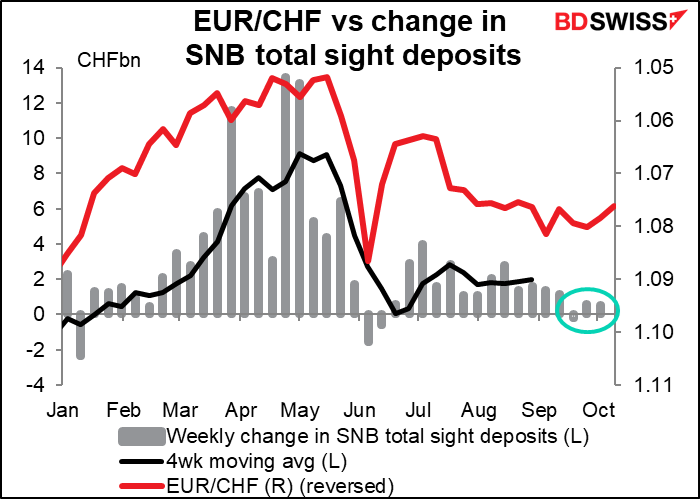 Swiss National Bank (SNB) President Jordan gave a speech last week on What constitutes sound money? I thought it might say something about the SNB’s intervention policy, but it turned out to be a six-page argument about why the SNB “reject any ideas aimed at channelling our assets into a sovereign wealth fund” – which in fact the SNB is already, almost – 20% of their assets are in equities.

Then there’s a bunch of speeches, mostly by people we’ve heard speak recently anyway, until overnight we get the riveting New Zealand food prices, which I never paid much attention to until I noticed it has an 85 rating on the Bloomberg relevance score. Still, with no forecasts, I’m not going to write much about it. 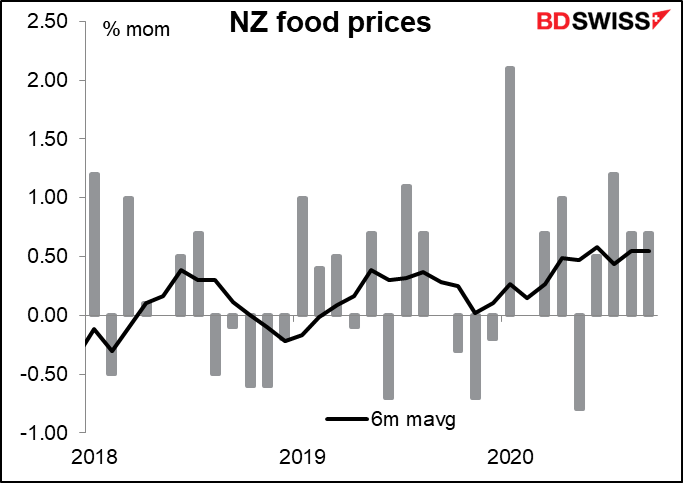 Sometime during the Asian day, China announces its trade data. There are two salient points: one, the low rate of growth of imports, expected to be only +0.1% yoy. While this is better than the contraction in the previous two months, it’s nothing like the 16.5% yoy increase in January & February. The recovery in China’s economy is taking some time to feed through to other countries, such as Australia, that export to the country.

The other salient point is that the expected surplus, $59.3bn, isn’t that far off the record $63.0bn surplus in May. 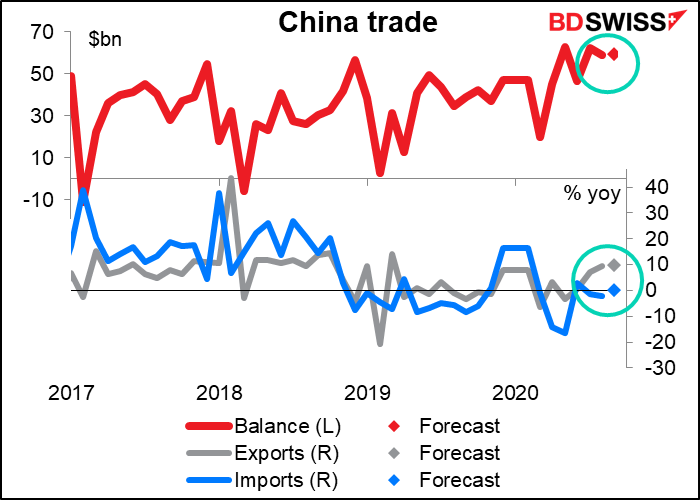 The continued high surpluses provide some fundamental justification for the plunge in USD/CNY on Friday, when Chinese traders returned from their extended autumn vacation. This was the largest one-day drop since March 2018, back when there was a lot of concern about Trump and his tariffs (although it really doesn’t count as a one-day drop since the official market was closed for several days). A near-record trade surplus and foreign demand for Chinese bonds, thanks to their higher yield and inclusion in some global bond indices, are likely to keep USD/CNY In a downtrend, in my view.

As we saw from the table above, USD/CNY has a strong negative correlation with the dollar’s overall movements – perhaps a falling USD/CNY (i.e., a rising CNY) implies a falling USD?

However, China started pushing back against the appreciating CNY. The People’s Bank of China (PBoC) Saturday announced that they would eliminate reserve requirement for some forward transactions, starting today. Banks previously had to hold 20% of sales on some foreign exchange transactions, a move imposed two years ago to keep the currency from weakening (because it makes it more expensive to buy foreign currency using forwards). This is yet another example of a central bank fighting against the appreciation of its currency.

Then Tuesday morning, when the gracious light lifts up his burning head, the UK announces its only major economic indicator this week, the UK employment data.

The unemployment rate is expected to increase by 0.2 ppt as various schemes to keep people on payrolls started to expire. Moreover as the economy opened up in August, more people probably started looking for jobs and therefore are counted as unemployed (the participation rate). Recent data on companies’ hiring shows labor demand still is weak in Britain, with vacancies at around half of their pre-pandemic level.

I think coming after the disappointing August GDP figure (+2.1% mom vs +4.6% expected, 6.4% previous), a further rise in unemployment could add to pressure on the Bank of England to ease further and would therefore be negative for the pound. 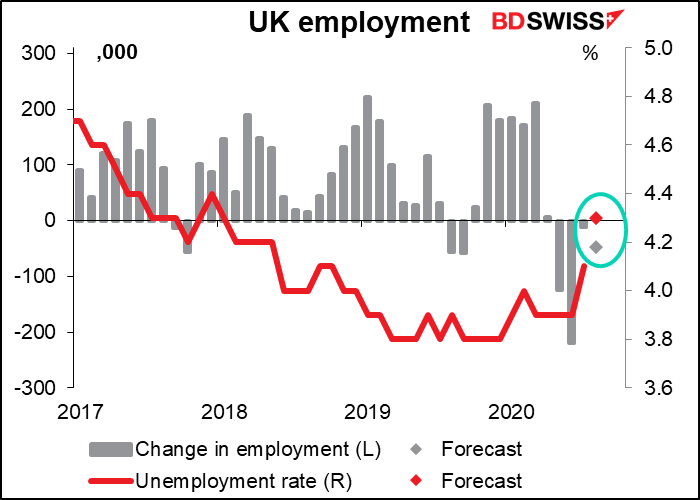 There are no forecasts for the jobless claims or the claimant count rate (the number of people receiving unemployment benefits from the government). The Bloomberg relevance number puts them as more important to the markets than the unemployment rate or change in unemployment (which are not only a month later but also both 3m rolling averages and therefore less sensitive to changes), but the higher relevance number may be a holdover from the old days when they were the focus of attention. The UK Office for National Statistics (ONS) stopped including them in its statistical bulletin from March 2017, because the series “may now be providing a misleading representation of the U.K. labor market,” the ONS said. (It still publishes the data elsewhere, which is why we still get it every month.) 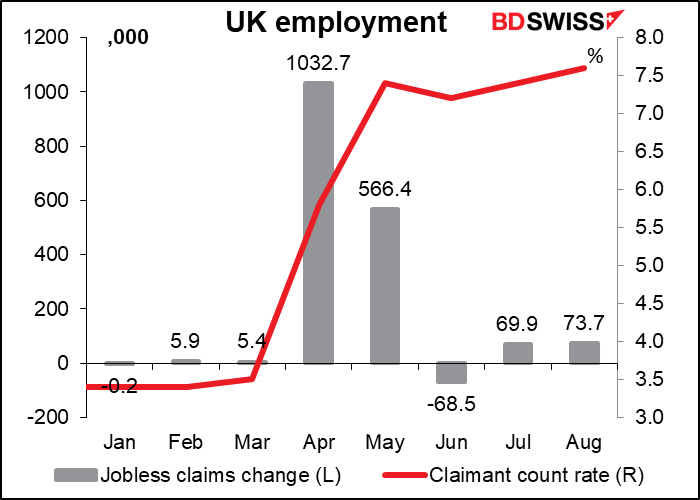 The future course of the employment data might not be so bleak. Although some of the furlough schemes are expiring, Chancellor Sunak Friday announced a new plan whereby the government would pay two-thirds of the wages for employees who work for firms forced to shut by law because of coronavirus restrictions. The plan will start 1 November and run for six months. 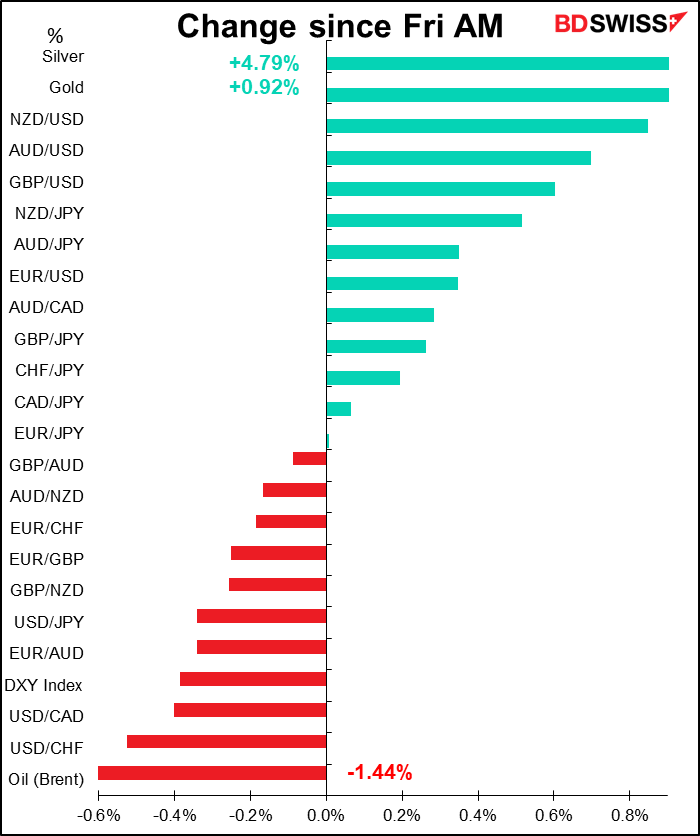