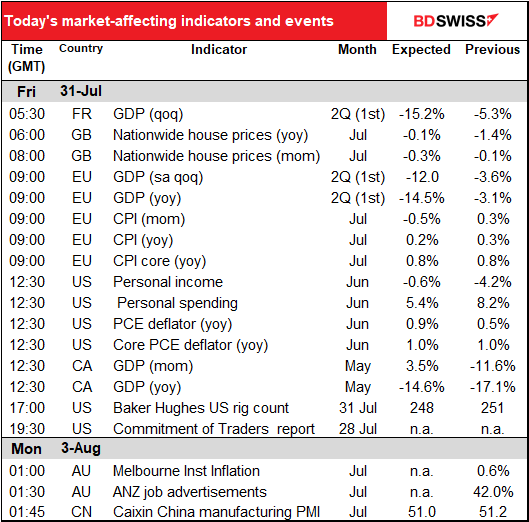 The dollar, as measured by the DXY index, fell to its lowest level since May 2018 on a slew of bad US news. Some was economic – the worst GDP figure ever (although that should’ve been no surprise to anyone) and rises in both initial and continuing jobless claims. Additionally, US politics just gets more and more bizarre. Moments after the terrible GDP figures came out, thereby squashing any hope that Trump could run for reelection on his economic record, the Cheeto-in-Chief sent out a tweet suggesting that they postpone the US election. This was a tweet too far even for his fellow Republicans, none of whom supported this bizarre idea – never mind that it’s up to Congress to set the date of the election, and the Democrat-controlled House of Representatives would never agree.

Furthermore, the Republicans who control the Senate can’t agree on the new rescue bill, because it involves spending too too much money. On the other hand, the bill that they’re discussing is only about one-third the size of the bill that the Democrat-controlled House of Representatives has already passed. It’s hard to see what kind of compromise these two sides can reach, and it’s certainly impossible to see them reaching it before millions of people’s benefits expire tonight, especially as the Senate is in recess until Monday. Negotiations will continue over the weekend. (The solution of course is for the Senate to pass their bill with the support of the Senate Democrats and only a few Republicans, but the Republicans have an unwritten rule not to do that.)

USD was especially weak vs EUR – which is naturally the alternative to USD – and GBP. There was no particular news why these currencies should’ve done well. On the contrary, German July inflation and Q2 GDP both printed weaker than expected, and there was nothing going on in Britain to push GBP/USD nearly up to 1.31, the highest level since March. GBP could be benefitting from last-minute end-month portfolio rebalancing.

Oil fell, perhaps on the weaker-than-expected GDP figures and rise in jobless claims, perhaps in anticipation of the inevitable increase in OPEC+ supply that will begin next week. Wednesday’s unexpected huge 10.6mn-barrel inventory drawdown didn’t boost prices much as market participants worry about whether demand is strong enough to absorb the expected increase in supply. The main reason for the drop in inventories was reduced imports, but if OPEC+ is increasing production, then the oil tankers can’t be far behind.

CAD followed oil closely during the day, leading it to be the worst-performing currency. Other commodity currencies also suffered.

Silver corrected further while gold rose a bit. I think that shake-out may have gone far enough and we could see silver outpacing gold next week, once the new month starts.

Short-term indicators
Maybe I spoke too soon. The updated NY Fed weekly economic index shows activity rose in the latest week. Maybe the US economy isn’t turning down after all. I think it’s too early to tell though. We’ll have to wait to see what happens with the US unemployment insurance. If that doesn’t get renewed in time – and it looks like it won’t — then the bottom is likely to fall out of the US recovery. Herman Cain and the deliberate flouting

Heaven knows, if I wanted to write something every day about the Orange Menace who runs my country I could do so. I try not to though because it normally has little to do with the FX market. But today I can’t help myself. I’d like to point out to everyone who’s not American and who isn’t following US events closely the death of Herman Cain.

Mr. Cain was, from one point of view, an admirable man who rose from disadvantaged circumstances to great success through intelligence and hard work. His mother was a cleaning lady and his father a janitor. He rose to be CEO of a pizza company, chairman of the Kansas City Fed (that’s not the same as President of a regional Fed – I don’t know what responsibilities if any the Chairman has), and a candidate for President.
I say “from one point of view” because he was obviously a scumbag as well in that he was dogged by credible accusations of sexual harassment and accused of having a long-running extramarital affair. But that’s not the point of this story.

The point is that he’s an intelligent guy who for some reason was a big admirer of Trump’s and followed his leader in many ways, including ridiculing those who worried about the virus and mocking people for wearing masks when out in public. He attended Trump’s June rally in Tulsa, Oklahoma – you remember, the one with six workers who turned out to be infected. Before the rally, Cain urged people to “Ignore the outrage” and to defy “the left-wing shaming!” Nine days later, he tested positive himself, and a little over a month later, he’s dead. Everyone denies that he got the virus there, and it can’t be proven, but… He’s not the only one. Several other high-profile Republicans who mocked masks have since become infected.
I don’t understand it. I don’t understand why so many otherwise intelligent people refuse to take basic precautions against a deadly disease. No one would allow strangers to bleed on them — what’s the difference when COVID-19 is transmitted by aerosols? 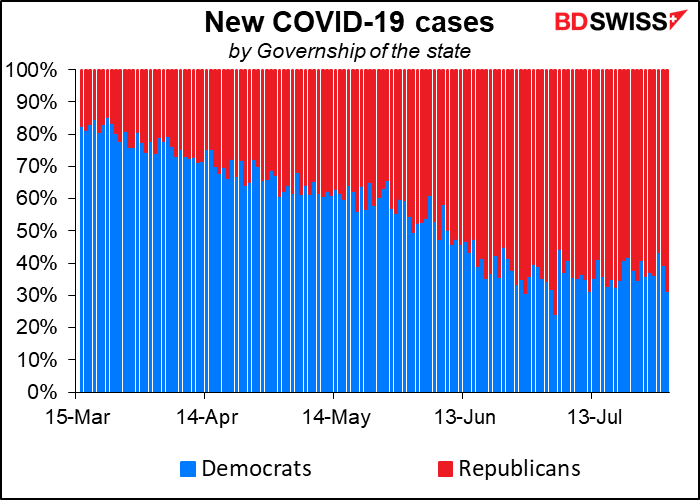 Germany’s Q2 GDP was down 10.1% qoq vs expectations of -9.0%, which suggests that EU GDP may surprise on the downside. That could be negative for the euro. The forecast paths for recovery are about the same in both the EU and the US. Of course the Q3 figures are likely to be revised in light of the Q2 data, but this is how things stand now. If these forecasts are correct – which they inevitably will not be – then the expectations of “growth divergence” that’s driving EUR/USD higher should dissipate soon and the pair should plateau. Recently US indicators have been exceeding expectations more than EU indicators have, so we could see some retracement in EUR/USD as market participants tone down their expectations of European growth outperformance. Much depends though on what happens to US consumption as the Congress jumps off the “fiscal cliff” tonight and leaves tens of millions of people without enough money to support themselves. 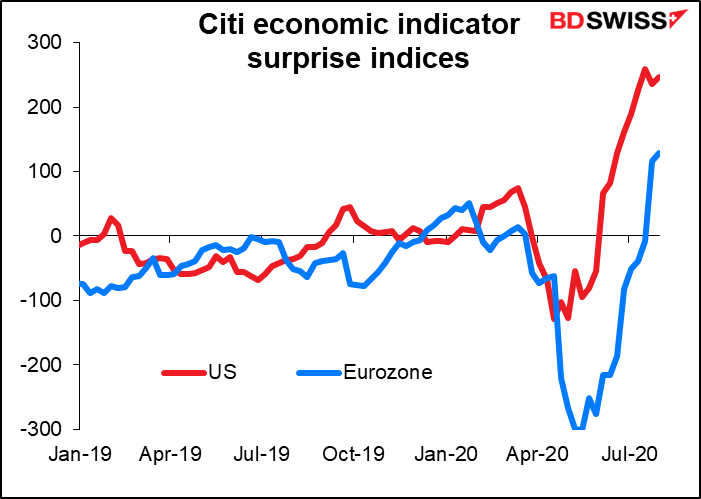 EU consumer prices are expected to fall in July, bringing the yoy rate of growth down to almost zero. Core inflation, which is what the European Central Bank targets, is forecast to stay unchanged however. Yesterday’s German inflation data was worse than expected as prices fell 0.5% mom, more than the -0.2% fall that was expected, and were unchanged from the previous year—dangerously close to deflation. The declines were boosted by pass-through from recent cuts in VAT. Today’s EU-wide figure could be a miss as well. That might be EUR-, especially if EU-wide GDP also misses the forecast. The US personal consumption and spending data are expected to show once again that incomes are holding up well – that the government’s programs have boosted people’s finances overall. (This is what horrifies Republicans so much – that some people have actually been making more money on unemployment than when they were working. How despicable!) 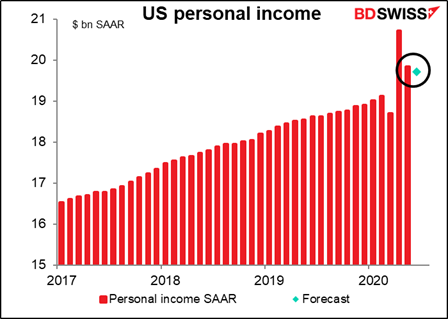 At the same time, personal spending remained relatively subdued – about back to the level of March, but some 7% below the level of January and February. 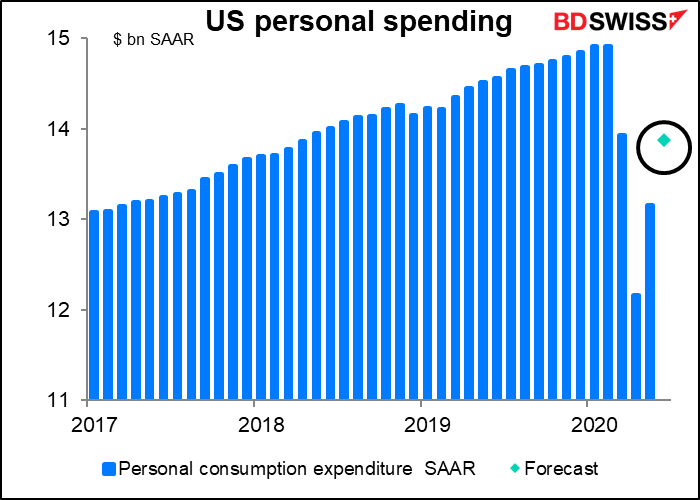 As a result the savings ratio (defined here as income – spending as a % of income), which for years was quite stable at around 19%-21%, hit a record high of 41% in April. It came down to 34% in May and is expected to fall further to 30% in June. That’s lower but still quite high from a historical perspective. Remember that one person’s spending is another person’s income. This savings therefore represents lost income to someone. This is the threat to the recovery from financial insecurity – if people are unsure about their future income, they’ll cut back on spending, which causes income insecurity for someone else. That dynamic is still being played out, whether by choice or by default (maybe people simply can’t spend money like they used to because the restaurants, gyms or whatever that they used to spend it on are still closed).

The personal consumption expenditure (PCE) deflators that come out with the personal income & spending data are the Fed’s preferred inflation gauges, although they don’t get as much attention as the better-known consumer price index (CPI). The headline figure is expected to jump as a result of higher oil prices, but the core PCE deflator – which is what the Fed pays most attention to – is forecast to stick at 1%, only half the Fed’s target. Above-target inflation is a concern for the distant future. 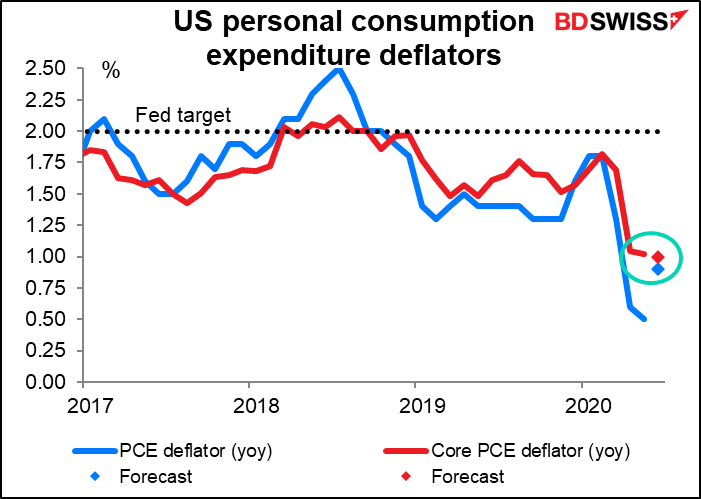 Canada’s monthly GDP for May is forecast to be up sharply on a mom basis, but still down on a yoy basis almost as much – but not quite – as it was in April, which everyone assumes was the bottom of the cycle. 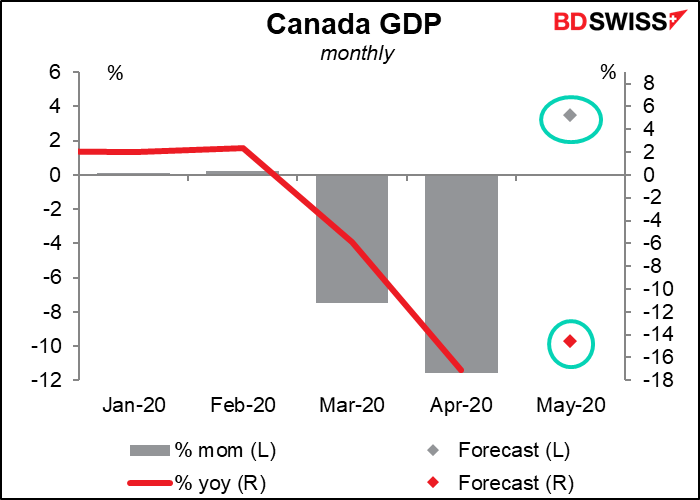 Given the signs of continued recovery in June, the Canadian economy may be able to beat the Bank of Canada’s rather grim forecast of a -13.1% qoq (-43% qoq SAAR) decline in Q2. However, July looks like it could be problematic as the recovery seems to have plateaued in July in Canada – and elsewhere. 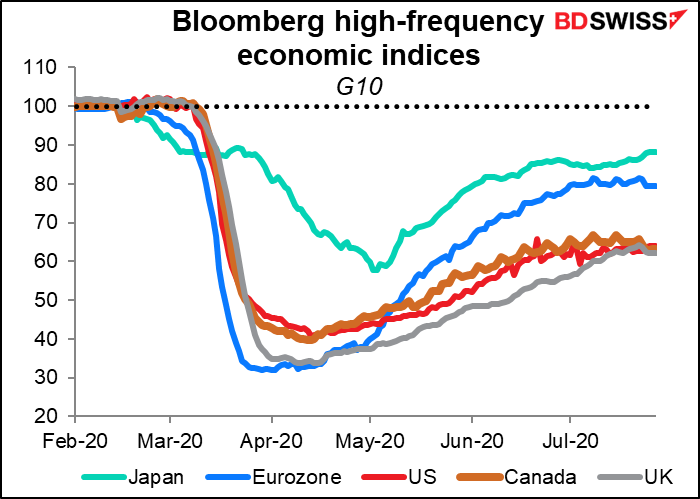 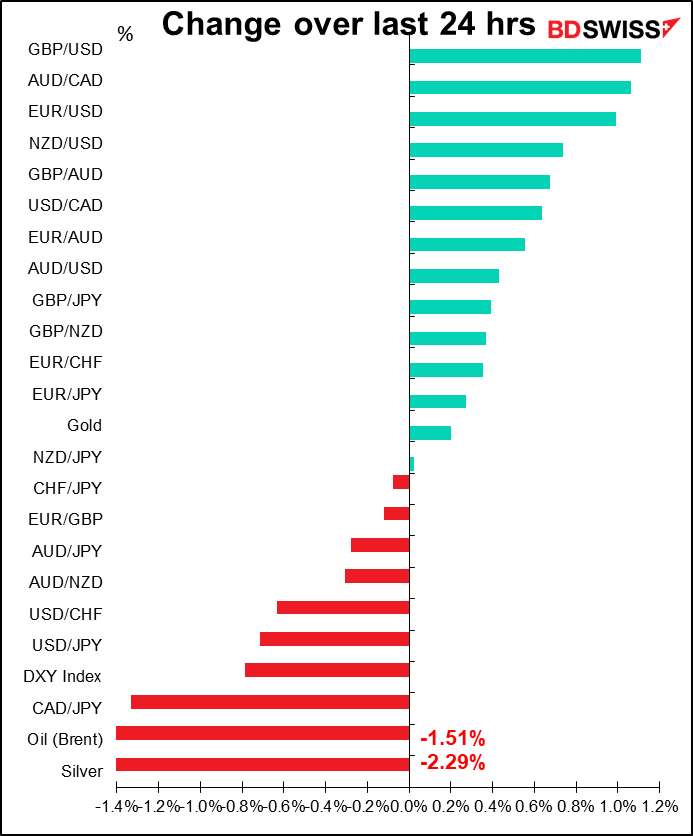