You are at:Home»MARKET PREVIEW»USD Up, JPY Down after stellar NFP changes US rate Expectations; quiet Day ahead 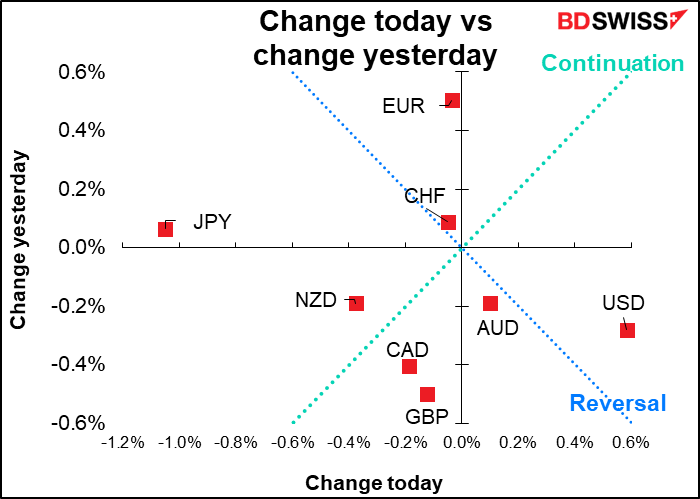 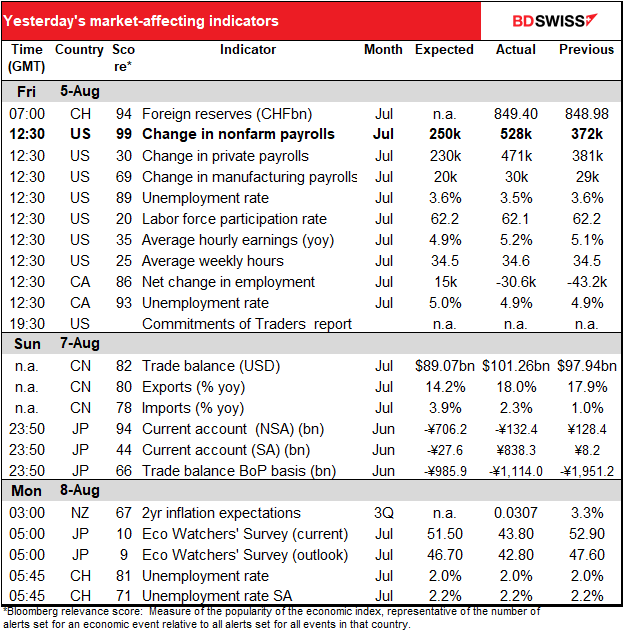 It all came down to Friday’s spectacular US nonfarm payrolls, which far exceeded expectations (see table above & commentary below).

With the labor market clearly stronger than what the Fed and the market had anticipated, US rate expectations rose. The market is now assuming that the fed funds rate will peak at 3.65% in April, which is one rate hike more than it was assuming on Thursday. 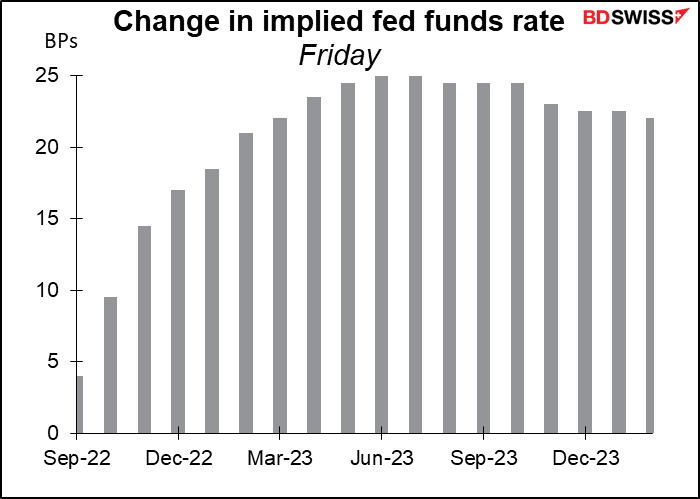 The odds now favor another 75 bps hike in September. 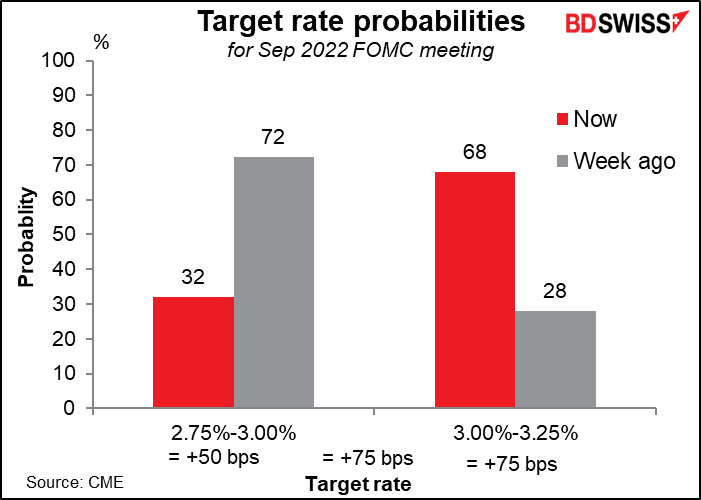 The change wasn’t confined to the US. Rates rose globally at both ends of the yield curve – except of course in Japan. That explains the weakness in the yen, USD/JPY moved back above 135 after having been as low as 130.41 just a few days ago (Aug. 2nd).

I’m at a loss to explain the big rise in Eurozone yields, or more specifically, German bond yields. Bloomberg just said that “European bonds follow Treasuries lower…” but that doesn’t explain why they fell even more than Treasuries. It’s especially surprising after Moody’s downgraded Italy’s sovereign rating outlook to negative on Friday. This is worrisome as Moody’s currently rates Italy at Baa3, only one level above sub-investment grade status. If Moody’s rates Italy at junk bond status, it could force some fund managers who aren’t allowed to hold such low-rated debt to sell. I would’ve thought that the dangers in Italy might’ve forced money into German bonds and thereby kept German yields from rising so much, but in fact peripheral spreads were little changed. 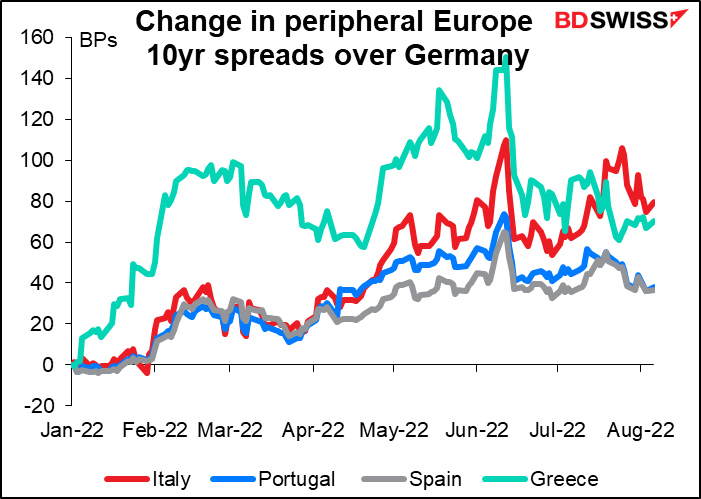 Italy’s problems were compounded on Sunday after a centrist party quit its alliance with the Democrats, only days after agreeing to join forces in a bid to prevent a right-wing landslide in September’s elections.

The reason UK 10-year yields led the pack was probably due to Friday’s comments by Bank of England Gov. Bailey and Chief Economist Pill. Bailey noted concerns about entrenched inflation led the central bank to tighten more aggressively at Thursday’s Monetary Policy Committee meeting. He added, “businesses have trouble hiring people” and are “not finding it difficult to raise prices at the moment.” Pill noted there are risks the BoE raises rates too much or too little to combat inflation and there is evidence of persistent inflation in wage growth and in some domestic prices.

As usual, the change in rate expectations was the main factor moving the FX market. 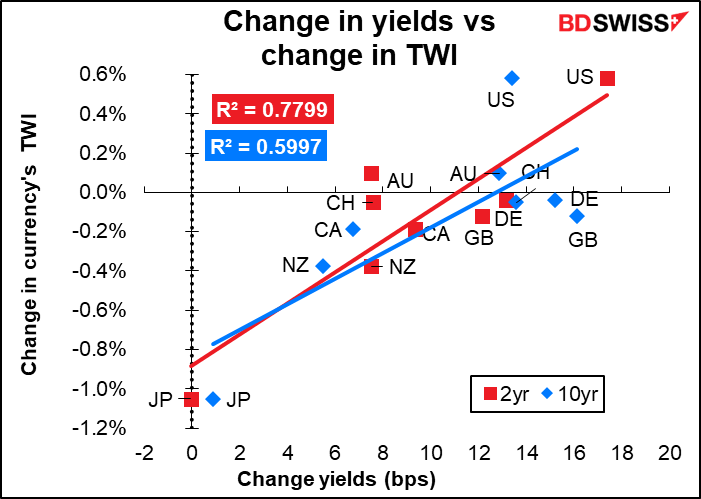 US stocks immediately fell about 1% when the news came out, but the market managed to close almost unchanged (S&P 500 -0.16%). This suggests perhaps a change in the “bad news is good news” paradigm that’s been ruling the market recently – the assumption that if the economy is slowing, the Fed won’t have to tighten as much and that lower interest rates should therefore support the market.

The labor market said “nice try” to the Fed – the central bank is raising rates in an effort to bring demand for labor more in line with supply, but it just isn’t working yet. On the contrary, most of the data were quite the opposite of what the Fed wants to see. A huge number of new jobs were added, plus the previous month’s figure was revised up by 28k. Moreover, after holding steady for four consecutive months at 3.6% — indicating that the labor market was perhaps as tight as it was going to get — the unemployment rate fell to 3.5%, equalling the record low. Meanwhile the participation rate declined, which is perhaps the worst thing they could imagine. (That may be why the unemployment rate fell.) How can the labor market ever balance if the supply of labor is shrinking? Oh, and average hourly earnings continued to grow at the same pace, instead of growth slowing as expected. Maybe that’s the worst part from the Fed’s point of view: scarce labor continues to push up wages, which sets the stage for a wage/price spiral. 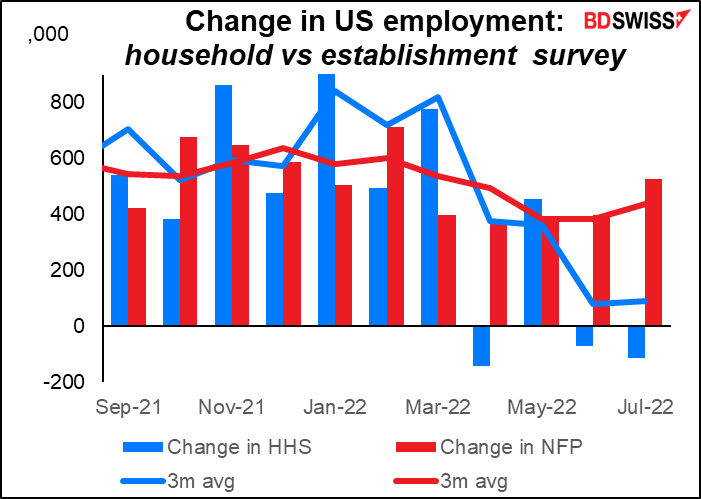 In either case though the US job market has now recovered all the jobs lost in the pandemic. (Well, to be strictly honest the Household Survey is still a bit below the pre-pandemic level – it’s 156.002mn jobs vs 156.240mn before. The recent peak for the HHS was 156.183mn.) 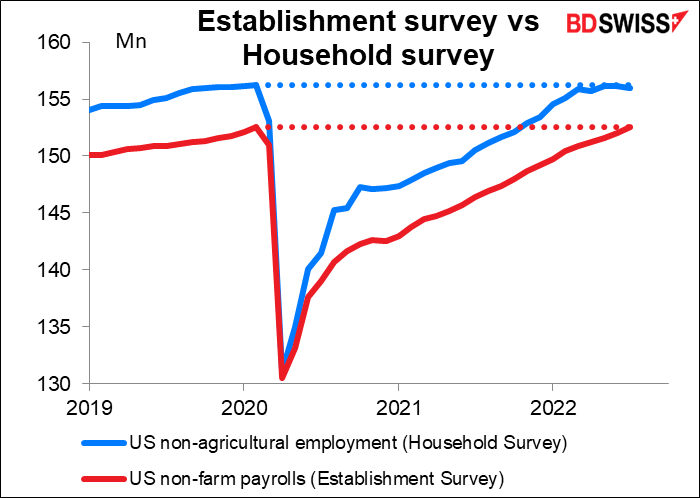 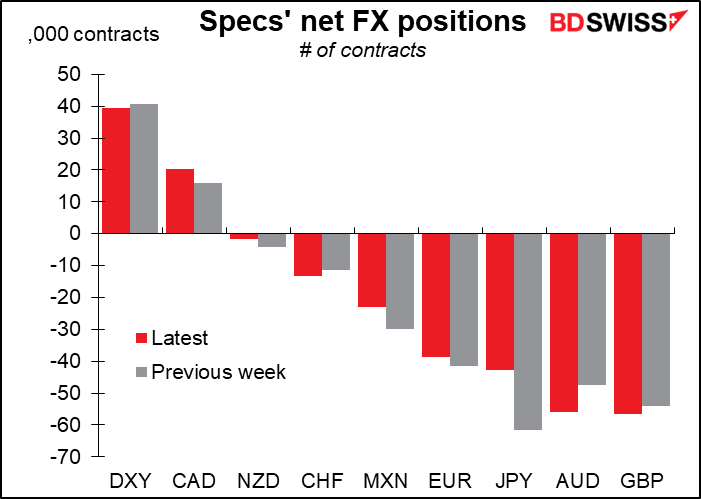 Hedge funds more than doubled their short CHF position – that may be one reason why EUR/CHF has been heading higher recently (see below re Swiss sight deposits). They trimmed their short EUR and JPY positions but added to short AUD. They pulled back on long GBP a bit. 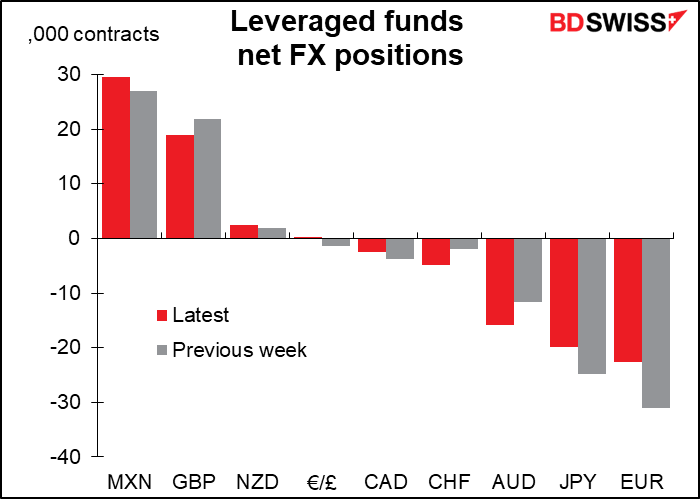 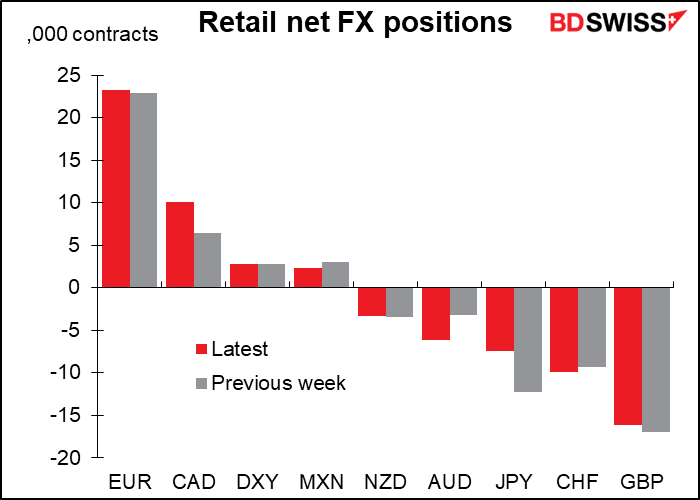 Precious metals: after weeks of cutting their positions, speculators changed direction and added to their gold longs while pushing their silver position just barely back into the long (+974 contracts vs -4,500 in the previous week). 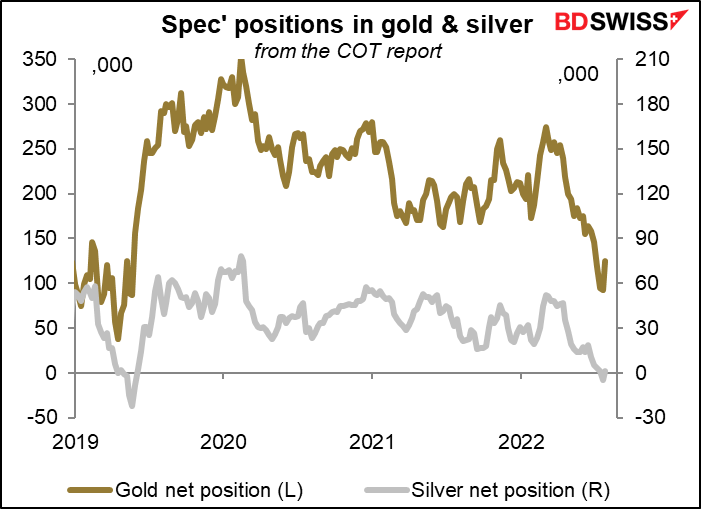 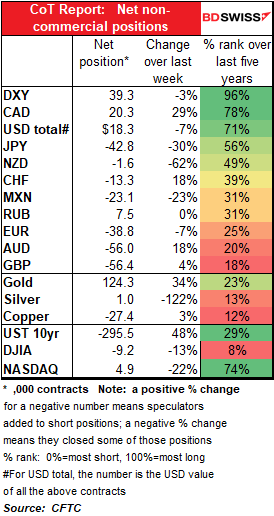 It’s a quiet start to what’s likely to be a quiet week, except Wednesday, when the US consumer price index comes out. Wednesday is also the day that there are three Fed officials speaking. Other than that, there are no major central bank speakers on the schedule this week. I guess everyone is on holiday.

During the US and European day there’s virtually nothing on except the usual Swiss sight deposits. The Swiss National Bank (SNB) has at least stopped trying to get the franc to appreciate, but it’s not aggressively doing much of anything recently. Probably with EUR/CHF turning slightly higher in the last week it was similarly out of the market. Perhaps they’ve all gone hiking in the Alps to escape the hot weather. 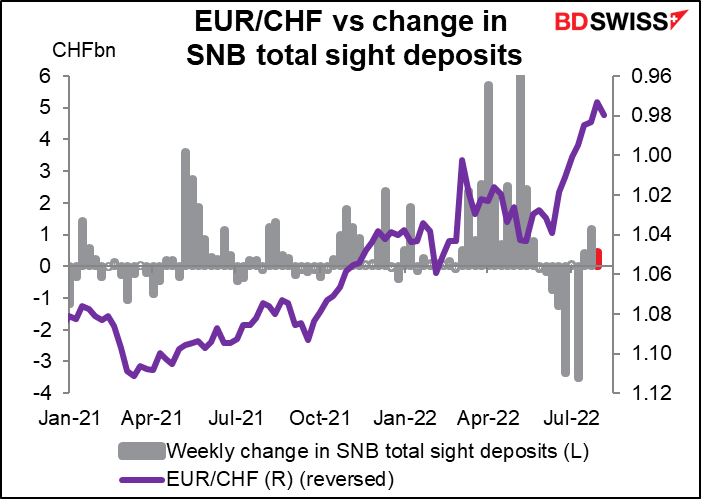 Japan’s money supply is probably of little interest to you folks, but since I get paid by the word and have nothing else to write about today I’m at least going to include a graph. Both M2 and M3 are expected to keep rising at the same pace, which suggests that the Bank of Japan is keeping its foot steady on the monetary accelerator and not pumping things up. Still, it’s significantly faster growth than before the pandemic (3% yoy range vs 2% yoy range). 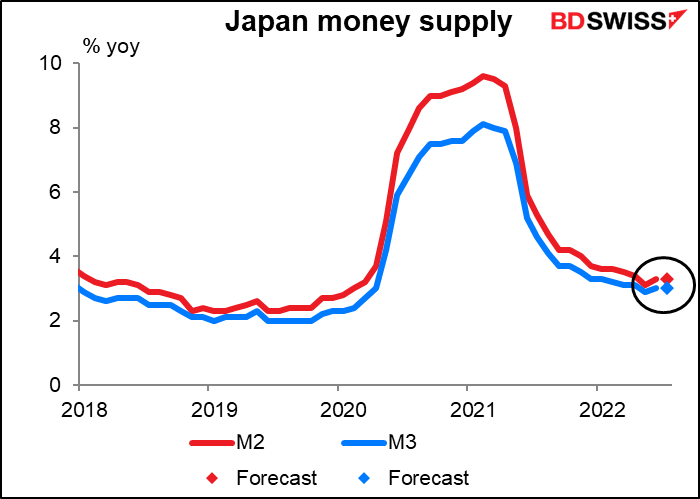 Then we get some Australian indicators that don’t have any forecasts.

Consumer confidence in Australia has fallen for eight months in a row. Any bets on what will happen this month? 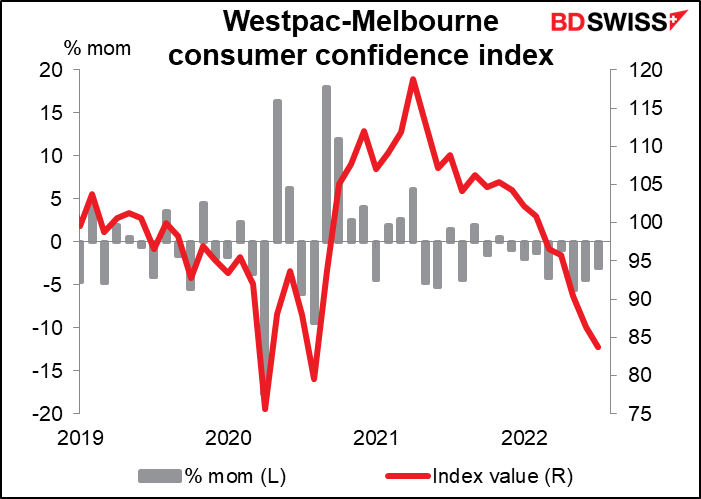 The National Australia Bank (NAB) business sentiment indices aren’t doing too great, either, although so far they remain in positive territory. 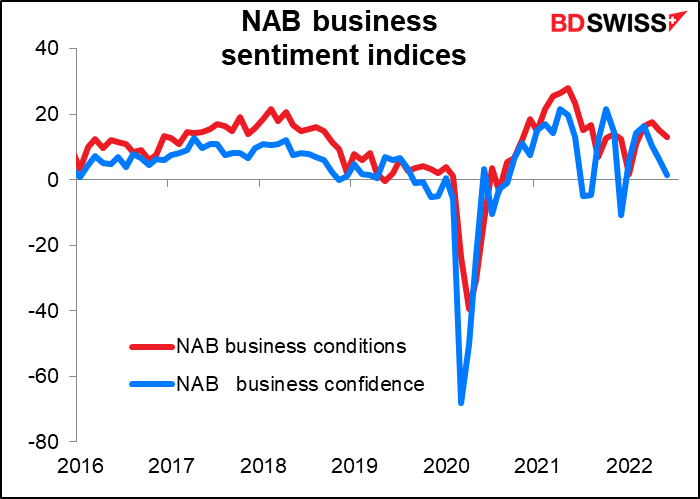 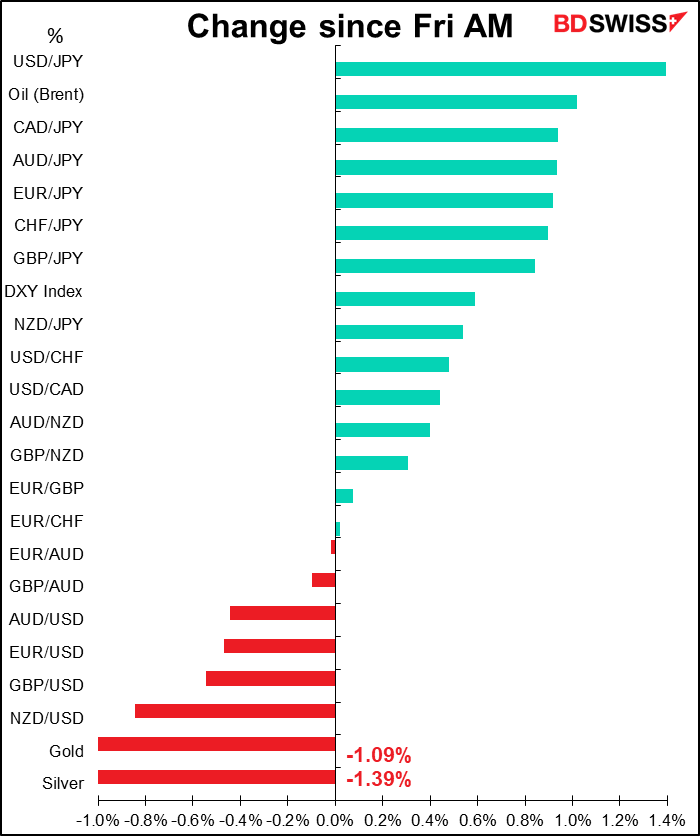 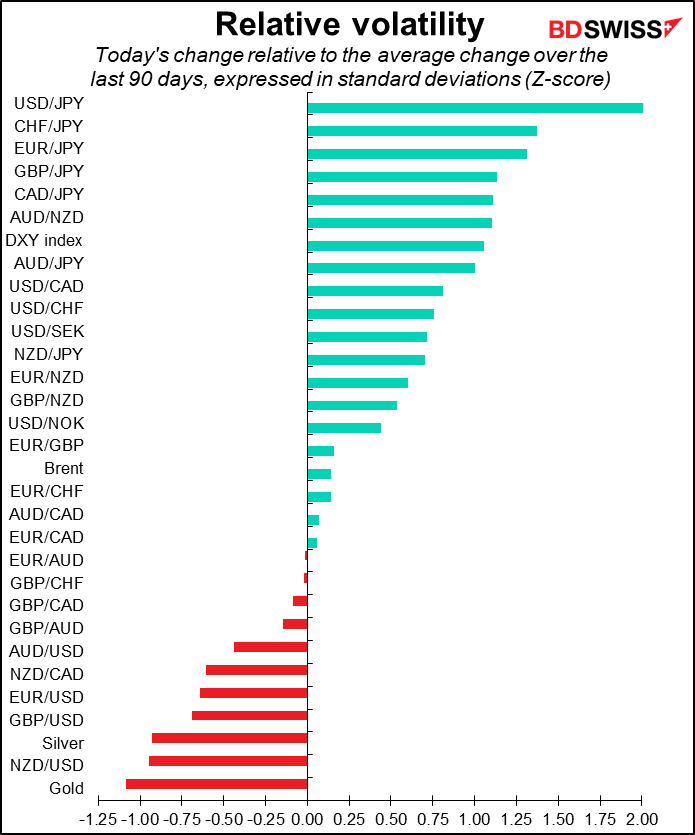