You are at:Home»MARKET PREVIEW»USD Up, Commodity Currencies Down on “Risk-Off” Mood; “Freedom Day” in UK 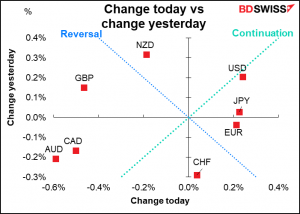 Judging from the stock markets, investors are in an all-around risk off mood. My equity screens are a sea of red, signifying declining prices. All major European and US markets were lower on Friday and most Asian markets are lower today as investors worry about the virus (see below), US-China relations, and generally weak economic reports, particularly increased fears of inflation. Although US retail sales beat expectations, consumer sentiment unexpectedly turned lower while inflation expectations turned higher. This raises the possibility that the Fed starts to worry that it’s behind the curve and tightens too much. 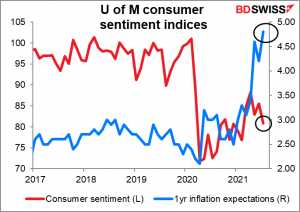 OPEC+ reached agreement over the weekend. There are three parts to it:

On the surface, the news seems bearish for oil, because after all they did agree to boost production. However it’s really bullish, because the market was beginning to price in the possibility that the agreement would fall apart completely and there would be a production free-for-all. Furthermore, the extension of the agreement means that supply will continue to increase only gradually. The news is therefore bullish for oil. Also, the cartel has not been keeping pace with the increase in demand for oil and so if the global economy keeps recovering, the market will remain relatively tight for some time.

Of course there are some questions about “if the global economy keeps recovering” – see the “virus catch-up” below.

So far the agreement hasn’t boosted oil or CAD. Oil continued to fall at the opening, but it’s started to turn higher. As people read more about the agreement and realize how it maintains OPEC+’s conservative approach to the supply/demand balance in the market, I would expect oil to recover and CAD to gain with it. 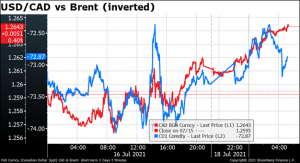 Virus catch-up: By the way, we have a new “winner” in the disastrous COVID-19 race. Last week I talked about Vietnam, but Indonesia seems to be even worse. After keeping the pandemic largely in check for some time, it’s simply gone vertical in the last month: up 135% since the beginning of the month, up 768% (from 5,763 cases a day to 50,039) since the beginning of June. 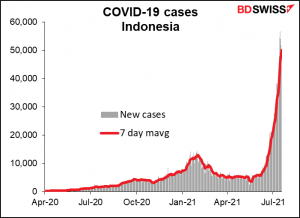 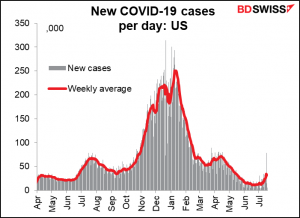 …but it’s up 150% from the beginning of the month. It won’t take long for growth at that pace to swamp the medical system. Los Angeles County has reimposed the requirement to wear masks indoors, while the Centers for Disease Control (CDC) has warned of a possible “pandemic of the unvaccinated.” 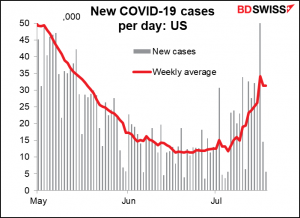 Today is “Freedom Day” in the UK, when all restrictions will be lifted. How smart does that look, given the parabolic rise in the number of new cases and their stunning number, now 4.4x that of the Eurozone and 6.4x that of the US, relative to population? 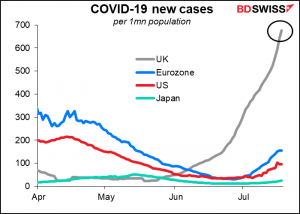 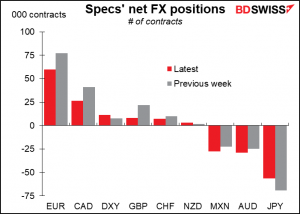 Hedge funds also got more optimistic on the dollar. They cut their long GBP, MXN, and CHF positions and added to their short EUR position. On the other hand they trimmed their short JPY positions a bit. 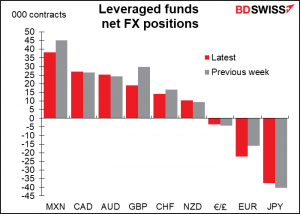 Speculators added to their long gold positions but trimmed their long silver slightly. 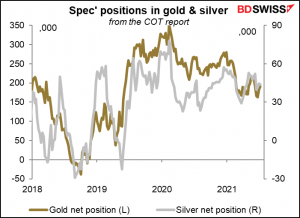 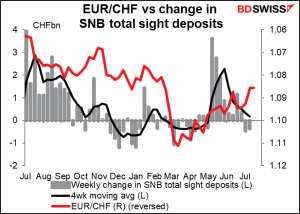 That’s about it for today. You can catch Bank of England Monetary Policy Committee member Jonathan Haskel speaking on “Will the Pandemic Scar the Economy?”

During the US day, people will be watching the progress of the $1tn US infrastructure bill. Debate will begin on Wednesday, but there’s still no agreement on what they’re even going to be debating. Passing the bill will be important in keeping aggregate demand steady in the US as unemployment benefits expire over the next several months.

Overnight we get Japan’s national consumer price index (CPI), which is now a second-tier indicator since everyone watches the Tokyo CPI, which comes out a couple of weeks earlier. The national CPI is expected to emerge from deflation, although just barely, so I don’t think it’s time to break out the champagne quite yet (or sparkling sake, if there is such a thing – I can’t remember ever having it). Note though that Japan’s low inflation isn’t all bad. A lot of it stems from the government’s drive to push down mobile phone charges. That alone knocked something like 0.6 percentage point off of the core inflation rate. 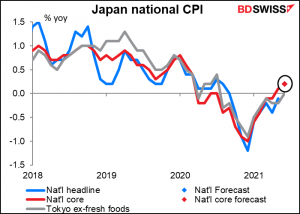 The Reserve Bank of Australia (RBA) releases the minutes of its July meeting, but since Gov. Lowe has made two speeches since the meeting (Today’s Monetary Policy Decision and The Labour Market and Monetary Policy) I doubt if there’s going to be any shocking new revelations. And in any case, with the nation’s two largest cities – Sydney and Melbourne – back into lockdown, the discussion is already dated.

I’VE BEEN STIMULATED! That might be TMI for a daily market comment, but there’s a reason I bring it up. I remember my Econ 10 (Intro to Macroeconomics) professor complaining about the difficulty of having field trips in economics. He said he used to encourage his students to sit by the local bank at 4 AM and watch the truck come to pick up the checks and deposits and take them to the local Fed office. That was about as good as it gets for an Econ field trip. So how can I illustrate US fiscal policy? What better way than to show you what an “Economic Impact Payment” looks like.

I thought of spending some of the money on booze, women, and gambling and then squandering the rest of it. I think I deserve it, because for many years I was a victim of the “Alternative Minimum Tax” (ATM). The ATM was created to catch gazillionaires who have so many deductions that they don’t have to pay any tax (sound familiar?). It says that if you have so many deductions that you don’t have to pay any tax, we’re going to use a different way of calculating your taxes so that you do wind up paying something. I lived in Japan where the top tax bracket is much higher than in the US so my Japanese taxes were always higher than my US taxes would’ve been. Accordingly I shouldn’t have paid any US taxes (in fact, only the US makes its nationals pay taxes when they live abroad, but that’s another argument entirely), but because of the ATM I wound up paying US taxes anyway and therefore more taxes than either a normal Japanese or US resident. (Evidently I just didn’t have good enough accountants.) So if Uncle Sam is handing out money, I think I’m entitled to some.

However, I know that a lot of people have been struggling because of the pandemic, while I’ve been lucky to work from home all this time at a great job that I enjoy. I therefore can’t in good conscience accept this windfall, which is meant for people who are struggling. Instead I’m going to donate my payment to the Oberlin Community Services Council, an organization in my hometown in the US that helps out people in need. 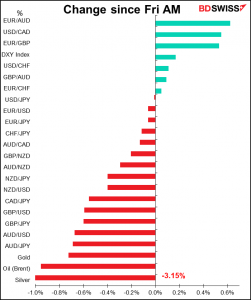