You are at:Home»MARKET PREVIEW»USD Up, CAD Down in Uneventful Trading; Easter Monday holiday, RBA Meeting

Sometimes thin markets make for volatile trading as a few large orders hit a market without many participants to absorb the flow. Other times they just mean little movement as no one is around to trade. Friday was the latter, suggesting that maybe today will be too.

A blowout US nonfarm payrolls on Friday – +916k vs market estimate of +660k — had relatively little impact on the FX market. The dollar gained but not that much as most currencies stayed within a narrow range. As the graph at the bottom shows, most currencies were in a range of ±0.2%, which is barely worth writing about. The US stock market was closed Friday, but the S&P 500 is indicated up 0.3% this morning, which is nice but nothing to get excited about.

The exception was CAD, which dropped sharply. Lower oil prices plus a tighter lockdown are weighing on the currency. While OPEC+ believes the oil market can absorb increased supply, the market is starting to say “not at the same price.” Meanwhile, Canada is taking measures to counter the rising virus count. Ontario entered a four-week lockdown on Saturday. While the absolute level of virus cases in Canada isn’t that high relative to some other countries, the direction is worrisome – while other countries have gotten or are getting their caseloads under control, Canada is edging higher. 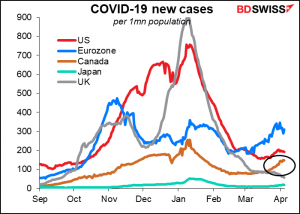 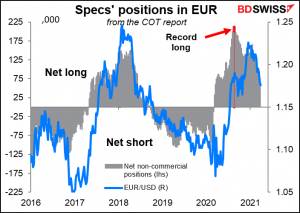 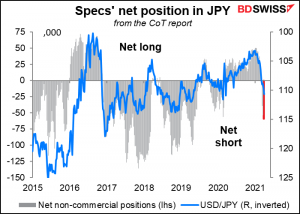 JPY is by far the speculators’ favourite short.

However, this last week the trade was not all one-way. While speculators bought USD vs JPY, EUR, and NZD, they sold it vs MXN, AUD, GBP, CHF, and CAD (i.e., they bought those currencies). 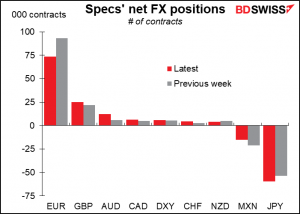 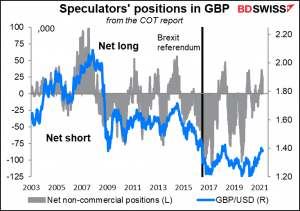 As for the hedge funds, they did not go along with the general trend of cutting USD shorts. On the contrary, they increased their AUD, MXN, GBP and CHF longs (particularly GBP, up 66%). And flipped from slightly short NZD to slightly long. They increased their EUR shorts by 1.8% while cutting their JPY shorts 1.1% — not particularly significant movements. 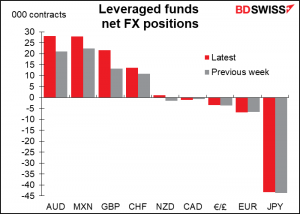 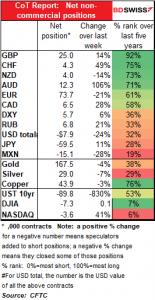 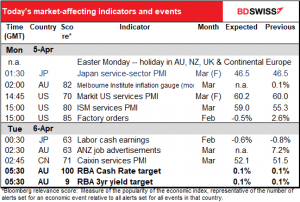 It’s Easter Monday and so much of the world is on holiday today. We can expect a quiet market but not necessarily a calm market as any orders will be hitting a thinned-out trading community with less ability to absorb the flow.

Having said that, there’s not a lot on the schedule to disrupt the market either. Nothing during the European day obviously as most of the European countries are on holiday. The big event of the day – such as it is — will come overnight, when the Reserve Bank of Australia meets for its almost-monthly rate decision (the RBA meets 11 times a year, vs most central banks, which meet only 8 times.)

I wrote about this in depth and detail in my Weekly Outlook, so you’re welcome to click on the link and read that if you want the depth and details. Otherwise I’ll just repeat the main points, which are:

The consensus is that policy is likely to remain unchanged. Both the cash rate and the peg for the RBA’s 3-year yield curve control (YCC) target are likely to remain at 0.10%. Nor are they likely to decide whether to extend or suspend YCC – most market participants don’t expect a decision on that until August.

The two things to watch for at the meeting are a) the RBA’s assessment of labor market conditions, and b) what they think of the housing market.

The unemployment rate of 5.8% in February was already below the RBA’s end-year forecast of 6% as set out in the February Statement on Monetary Policy, and progressing towards their estimate of full employment around 4 ¾%. It will be interesting to hear what they have to say about the risks to employment as the JobKeeper Payment Scheme, which subsidized keeping people in work, finished at the end of March. 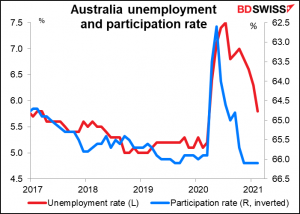 Housing market conditions will no doubt appear in the semi-annual Financial Stability Review (FSR) on Friday. The Board will have been briefed on the key findings of the FSR and those findings are usually summarized in the statement. They will probably talk about “watching” the housing market but I doubt if they’ll express any overt concern. 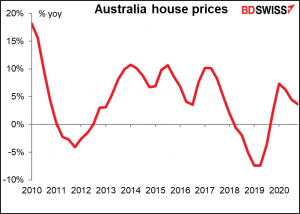 Right…getting back to chronological order…When the US market starts up, we get the final version of the US Markit service-sector purchasing managers’ index (PMI), which usually isn’t that different from the initial version. Then 15 minutes later we get the Institute of Supply Management (ISM) version of the same thing. It’s expected to rise to 59.0, which is not far off from the Markit figure of 60.0 (which is expected to be revised up slightly to 60.2). I don’t think this would surprise anyone and so I don’t expect it would have much impact on the currency, except perhaps it might help to confirm the picture of a stronger US economy and thereby boost the USD, as Friday’s nonfarm payrolls did. 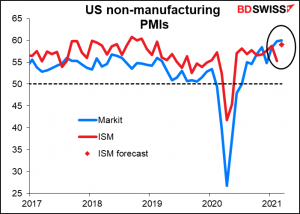 US factory orders are expected to be down 0.5% mom, following the 1.1% mom decline in durable goods orders. 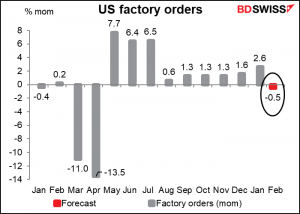 As you can see, there’s a solid relationship between the durable goods figure and the factory orders figure, and this month’s forecast is right in line with what one would expect, so I don’t think it will surprise anyone so long as it comes in more or less in line with expectations. 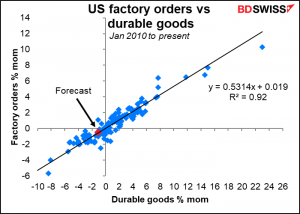 Japan’s labor cash earnings are still falling, but expected to fall at not as fast a pace. 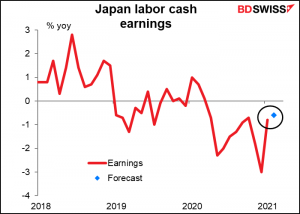 The ANZ Bank Australia job advertisements index doesn’t have any forecasts, but it is closely watched as a leading indicator of the labor market. More job ads today = more jobs tomorrow. That’s especially important as the RBA seems to be placing more and more emphasis on jobs (as are many other central banks worldwide, including the Fed). 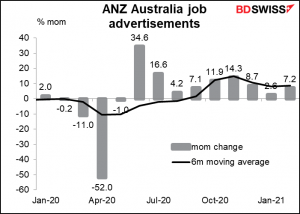 Finally, the Caixin/Markit service-sector PMI for China is expected to rise slightly to 52.1 from 51.5. That’s still well below the official service-sector PMI, which jumped during the month to 56.3 from 51.4. Still, higher is higher so this may support a “risk-on” environment, although I think what the RBA says will be more important for AUD today. 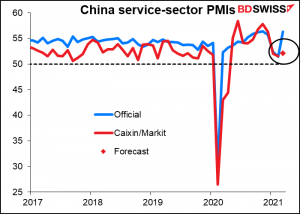 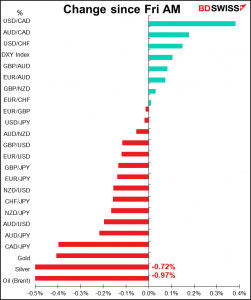