You are at:Home»MARKET PREVIEW»USD Up after Another big NFP gain, Commodity currencies Down on weak stocks; Russia Victory Day parade Friday’s US nonfarm payrolls showed a solid headline figure but some mixed details. On the one hand, the +428k increase in payrolls marks a full year with monthly gains over 400k, the longest stretch of such job gains going back to 1939. 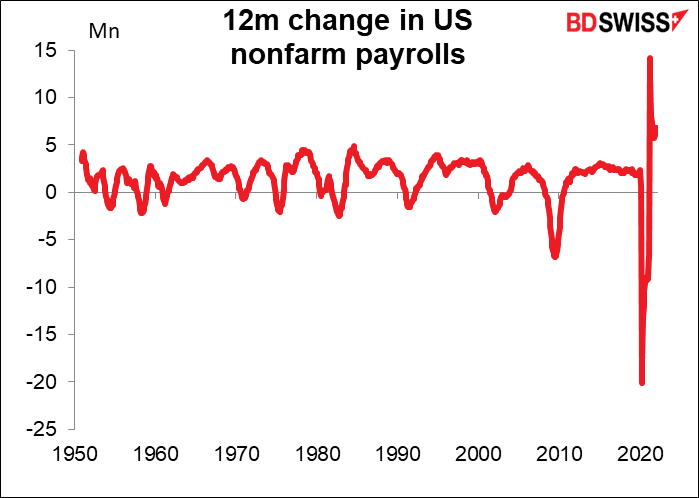 In particular, employment as measured by the household survey fell by 353k, which was coupled with a 0.2 percentage-point decline in the labor force participation rate, erasing the previous two months’ gains. Market participants focused on the lower-than-expected average hourly earnings figure (on a month-on-month basis, which isn’t in my table; I guess I’ll have to revise it for next time). Earnings rose 0.3% mom vs +0.4% expected, +0.5% previous in a month where the seasonal pattern is for a large gain, meaning that the unadjusted wage gain was probably even less.

Nonetheless, US yields finished the day higher at both ends of the yield curve, which continued to support the dollar. On the other hand, falling stock markets depressed demand for the commodity currencies.

I note that Swiss yields rose the most at both the short and long end of the yield curve. Swiss bonds don’t trade that actively so I wonder how realistic this price is. Nonetheless it seems significant that Swiss yields were the biggest mover while CHF declined. Normally, higher bond yields would tend to support a currency. This combination suggests that a risk premium may be creeping into CHF as the Swiss National Bank’s balance sheet gets hit by the decline in asset prices (see below).

EUR was in focus on Friday due to several comments by European Central Bank (ECB) officials suggesting a hike at the July meeting is likely, with more to follow after that. How much do you want?

The market has taken these comments and previous ones on board and has priced in a 25 bps rate hike by July and about 100 bps of tightening by the end of the year. 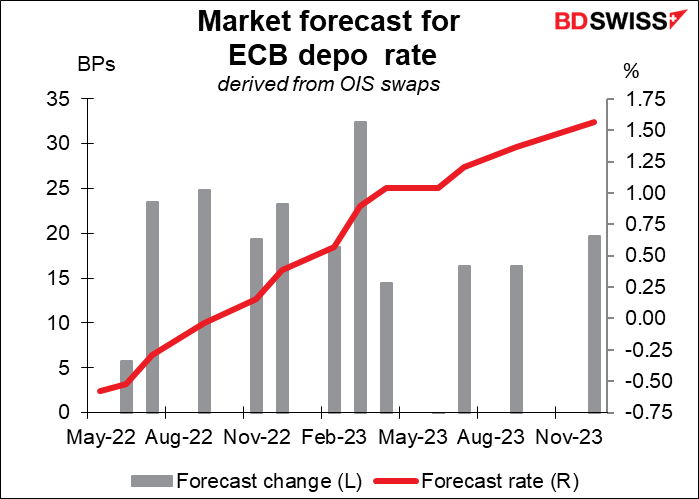 The election results in Northern Ireland are in. As expected, the Irish republican party Sinn Féin won the most seats and will therefore take the “first minister” seat. This was hardly a landslide — they won 27 seats vs 25 for the Democratic Unionist Party (DUP) out of the 90 seats up for grabs – but it was enough. The vote was historic as a unionist party (i.e. one in favor of Northern Ireland remaining in the United Kingdom) has had the most seats since Northern Ireland was formed in 1921.

Does this mean NI is about to break away from the UK and join the Republic of Ireland? Not necessarily. According to the BBC, The Northern Ireland Act 1998 – which followed the signing of the Good Friday Agreement – stated that Northern Ireland remained part of the UK and “shall not cease to be so without the consent of a majority of the people of Northern Ireland voting in a poll.” Such a poll would be called by the Secretary of State for Northern Ireland, a post in the central government in London, and not by the government in NI. The Act also stated that the NI Secretary would agree to hold a poll if it appears likely that a majority of people wanted a united Ireland. Successive opinion polls show they don’t. The most recent poll, published in April, put support at about a third and unionist parties won more votes in this election than nationalist parties (in fact Sinn Féin didn’t gain any seats, rather it came to power because the DUP lost seats).

Unfortunately, the border between NI and the Republic of Ireland is a problem with no good solution under Brexit. Countries tend to trade with other countries that are nearby. So Scotland trades mostly with England, making Scottish independence economically difficult. But NI trades mostly with the Republic of Ireland, which presented a lot of problems when Britain left the EU and had to set up customs checks on trade with the EU. This simply wouldn’t work in NI so they “grandfathered” NI into the EU to some degree and instead set up customs checks between NI and the rest of the UK. This puts NI in constitutional limbo, both inside and outside the UK at the same time. Furthermore, it only increased NI’s already-active trade with the Irish Republic to offset the new barriers to trade with Britain: the province’s exports to the south jumped 65% in 2021 and imports from the south were up by 54%. As the two areas become more and more economically integrated, the pressure for political integration is likely to increase too.

The central government in London is relatively indifferent to the province, which is a small part of the UK but a big drain on its finances. Its population, 1.89mn, is only 2.8% of the UK’s total population and less than half that of Scotland (5.45mn). The province relies on a bloated public sector – in 2020/21 public spending amounted to 64% of the province’s GDP – and a GBP 15bn annual “subvention” from London. A 2019 poll showed 59% of Tory party members preferred to lose NI than Brexit, and PM Johnson ultimately betrayed the province to secure the withdrawal deal.

Meanwhile, the Republic of Ireland has changed a lot from the poor agrarian society it was when NI was carved out in 1921. Its per capita GDP is substantially higher than that of the UK — $99,013 vs $47,203, according to the IMF, and the gap is likely to widen further in the future. While the “remain” vote in the Brexit referendum was hardly overwhelming – 56% remain, 44% leave – that may change over time as the economic center of gravity shifts further and further to the south. 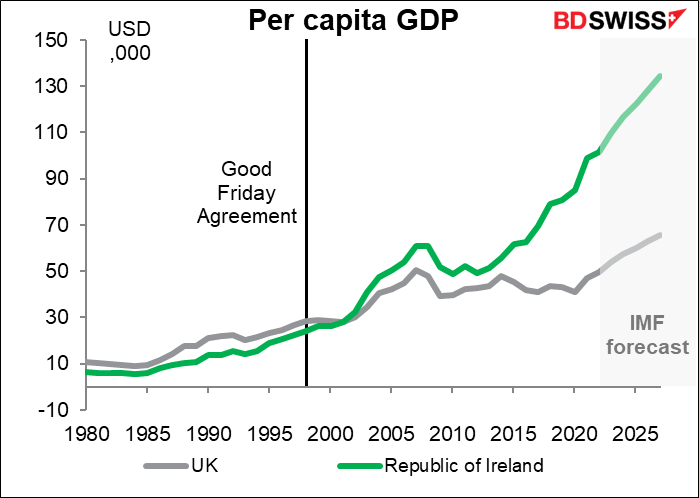 The next general election in the Republic of Ireland has to be held by February 2025. The polls currently show Sinn Féin in the lead, although of course in politics this means nothing so far ahead. Nonetheless, if this party were to win control of both governments, the wheels could begin turning. It’s not an issue for today or tomorrow, but eventually. 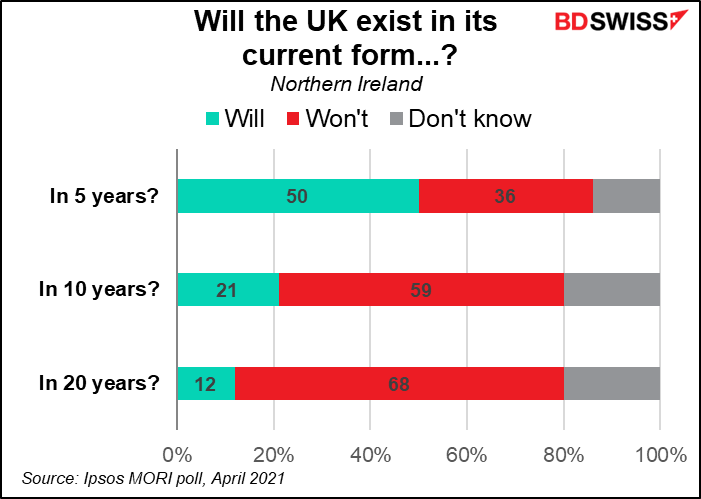 Compared with what’s going on in the stock and bond markets, FX market participants seem to be quite happy with their positions as there were once again few major changes in positioning. Overall they were more bullish USD ahead of the FOMC meeting last Wednesday. 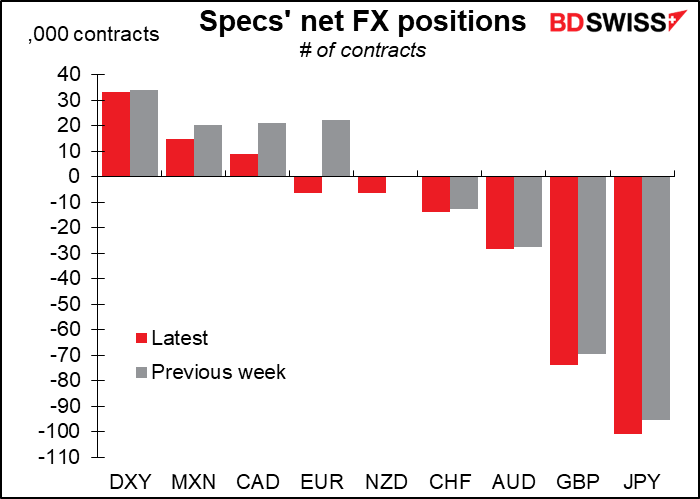 Hedge funds were noticeably more bearish JPY and EUR while they flipped from long NZD to short and from short AUD to long. So in effect they went from short AUD/NZD to long, although the positions are not entirely matched for size. 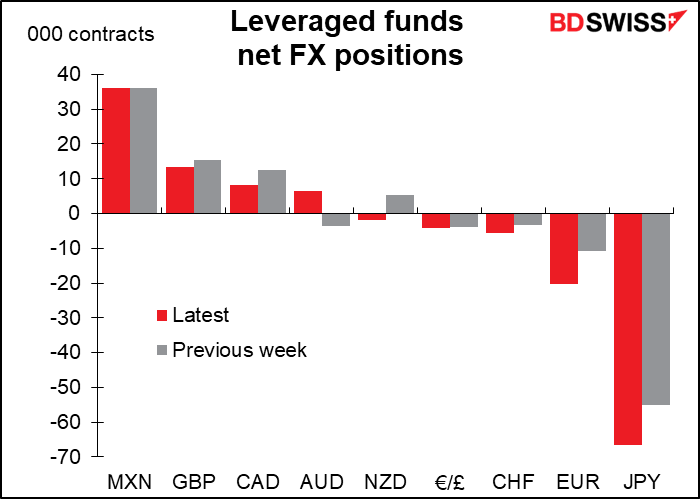 Retail on the other hand became more bullish EUR over the week. They trimmed their long CAD and short GBP positions but added to short NZD, AUD, and CHF. Not much change in JPY. Precious metals: Specs continued to trim their long positions in both gold and silver, the third consecutive week for gold. 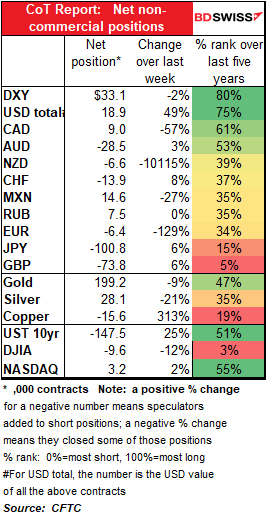 The big item on the schedule today is Victory Day in Russia. This was the main topic of this week’s award-winning Weekly Outlook (well, it hasn’t won any awards yet, but I’m sure it would if my mom were allowed to vote). The parade is scheduled to start at 0700 GMT so Putin’s speech may be over by the time this comment is sent out.

Putin usually dedicates his speech to familiar lines about the “specter of fascism” and a recognition of veterans of what Russia calls the Great Patriotic War. This year however there are fears that he may use it to announce an escalation of the “special military operation,” aka invasion, in Ukraine. In its “items to watch” list last week, the Institute for the Study of War said Russia might change the status of the self-declared Donetsk and Luhansk people’s republics, merging them into a single “Donbas republic” and/or annex them directly to Russia. Or he could claim limited success in Mariupol  – it is Victory Day, after all – and let it go at that. Some officials though fear Putin will go further and formally declare war on Ukraine, or say that it’s all NATO’s fault and declare war on NATO. Oh dear.

As for the economic indicators, it’s an unusually empty calendar today.

EUR/CHF was approaching parity but has backed off somewhat. The Swiss National Bank (SNB) seems to be keeping up the intervention nonetheless, maybe not at full blast but still at a healthy pace. What will today’s Swiss sight deposit numbers show? 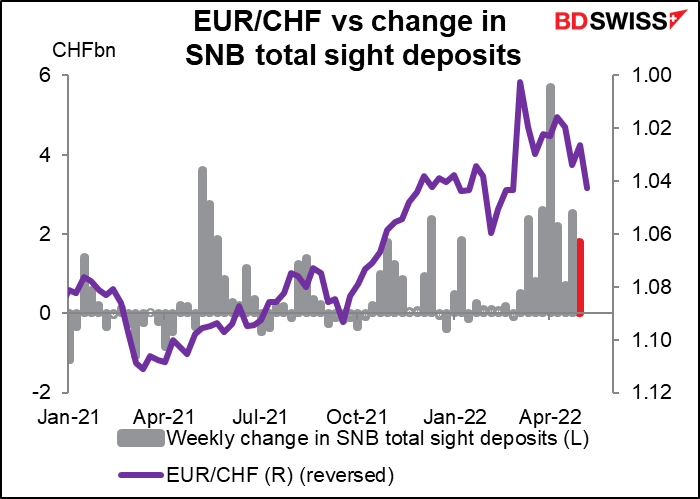 The SNB has been one of the victims of the drop in markets. Its bond portfolio is no doubt hurting as bond yields everywhere soar. 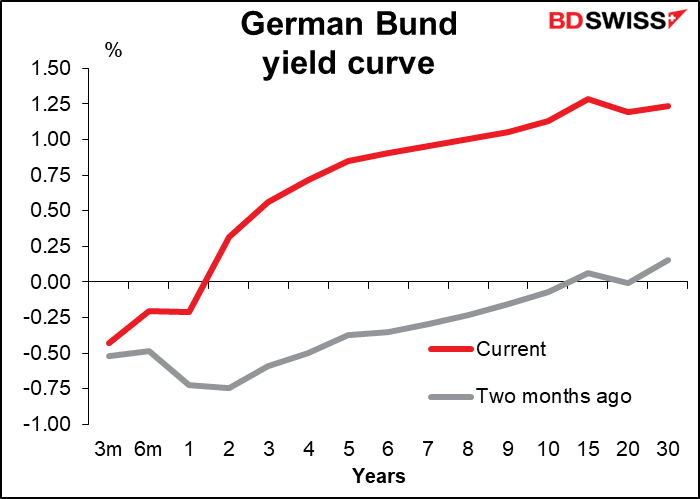 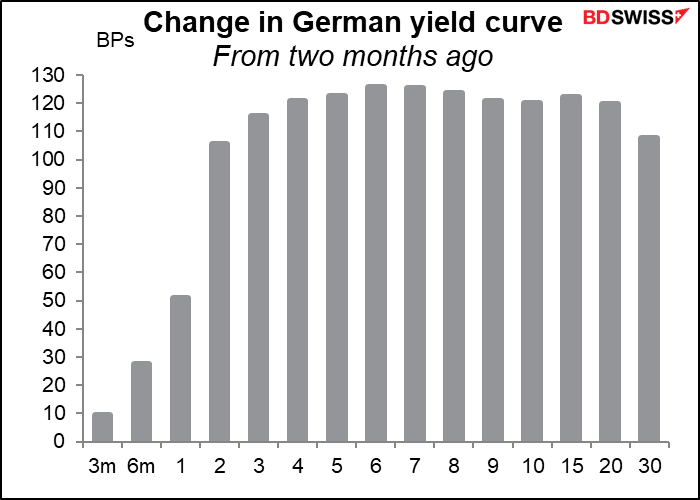 The SNB also invests in single stocks, which is unusual for a central bank. (As does Norges Bank. The Bank of Japan buys exchange-traded funds, not single stocks.) EG it owns 62mn shares or 0.4% of Apple and 9mn shares (also 0.4%) of Meta Platforms (aka Facebook). Needless to say its portfolio hasn’t been doing that well recently (whose has?). This may be weighing on CHF.

There’s no forecast for Canadian building permits and to be honest this indicator doesn’t have much impact on the exchange rate so ordinarily I’d just ignore it, but with little else on the schedule today this might attract some attention. Also since the Canadian housing market has been attracting some attention recently. Following a speech last week, Senior Deputy Governor Carolyn Rogers said in answer to a question that “housing price growth is unsustainably strong in Canada” and “We need higher rates to moderate demand, including demand in the housing market.” I assume if building permits increase that could go some ways to dampening house price growth and thereby reducing the need for the Bank to hike rates, but until that happens it will also foster demand for materials and labor and thus bolster the economy – so it’s not clear which way we should trade it. Probably the FX market will ignore it as usual. 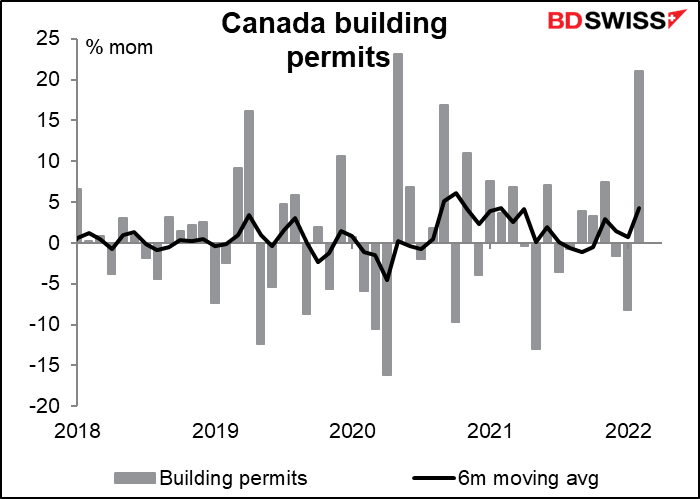 US wholesale inventories have been climbing pretty steadily ever since the first pandemic shock ended. This month they’re expected to rise at the same pace as in the previous month. That should be yet another sign of solid growth in the US economy, which could be modestly USD+. There are no forecasts for the National Australia Bank (NAB) business confidence & business conditions indices, but I have it on good authority that these are even more closely watched than the Markit purchasing managers’ indices (PMIs) in Australia. 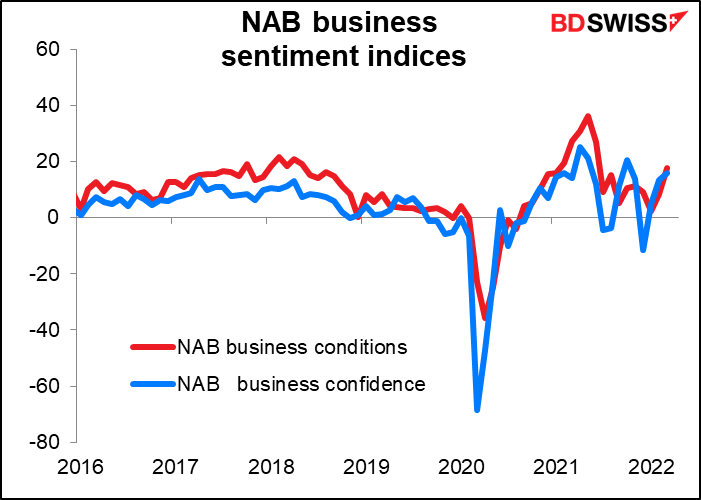 Since the PMIs come out before the NAB business sentiment indices do, we can get some idea of what the latter are likely to do. Unchanged is my best guess. That should have little impact on AUD, I would think. 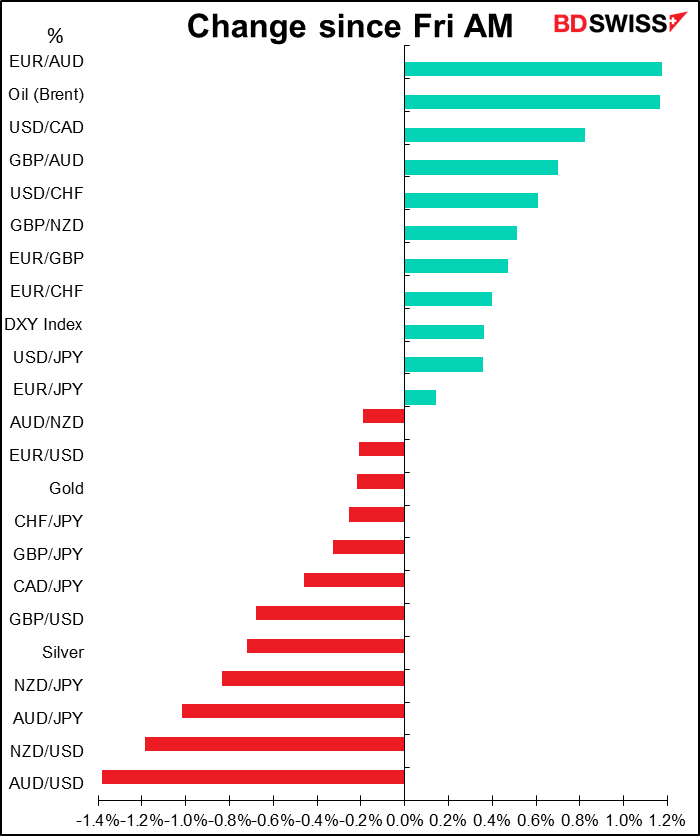