The dollar was generally stronger in a risk-off environment. US yields continued to rise in a market that’s still substantially short dollars. 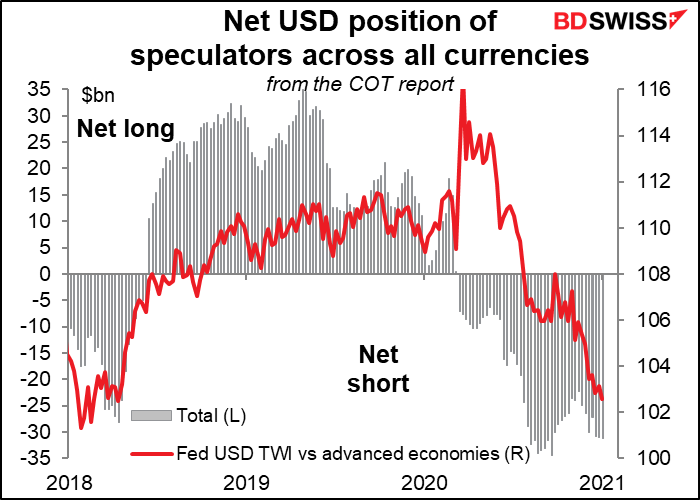 Ten-year yields rose another +3bps to 1.15%, their highest level since the pandemic began, as the market adjusted to the prospect of further fiscal stimulus and possible tapering of the Fed’s quantitative easing bond-buying program. The yield curve steepened further. 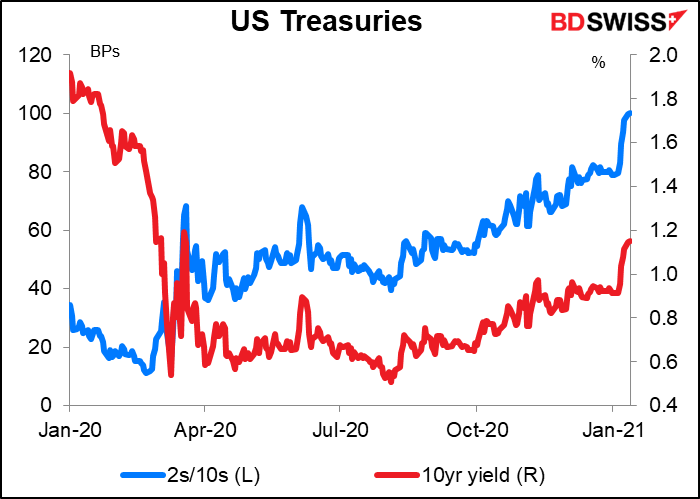 Recent comments by Fed officials show that they’re relatively optimistic on the economy, at least for the second half of the year, and some might even consider tapering their bond-buying program then. “I do think you’re looking at a second half that is going to be very strong…” Richmond Fed President Barkin (V) said yesterday. Asked about the possibility of Fed tapering its asset purchases in the second half, Atlanta Fed President Bostic (V) said, “I’m open to that.” “A lot of it will depend on how the virus and the vaccine distribution goes. But if it goes well — if we learn quickly — I think there is some good upside potential.”

The view isn’t unanimous of course. Fed Vice Chair Clarida (V) Friday said he doesn’t expect the Fed to begin tapering this year despite an expected strengthening of the economy.

Nonetheless, some major investment houses are changing their views on the dollar in the wake of higher US interest rates and change of tone at the Fed. Morgan Stanely’s FX analysts recently wrote, “We turn neutral on the USD amid rising U.S. fiscal stimulus odds and crowded USD sentiment.” The firm’s head of global macro strategy, Matthew Horbach, told Bloomberg that “it’s no longer attractive to be positioned for a weaker dollar from here given the uncertainties around the fiscal policy outlook, the monetary policy outlook and the growth in inflation outlook.” These firms’ views influence the decisions of major institutional investors and so can impact the markets’ direction.

Stock markets fell, led down by the technology sector in the wake of restrictions that Twitter and other social media companies implemented over the weekend, such as cutting off Trump’s noxious Twitter feed permanently. Twitter fell -6.4%, its worst daily performance since October, and other big tech firms such as Facebook (-4.0%), Apple (-2.3%), and Amazon (-2.2%) similarly underperformed the broader market as pressure rose from global policymakers to increase regulation on major platforms. On the other hand, more cyclical sectors such as energy (+1.6%) and banks (+1.2%) outperformed. Investors are still trying to sort out the ramifications of last week’s events in Washington, which now include another impeachment vote, scheduled for tomorrow.

In this risk-off environment, the risk-sensitive commodity currencies naturally fell, although I admit I don’t have any good explanation of why NZD underperformed AUD. Commodity prices have mostly declined over the last week, except for energy prices, which have been boosted by Saudi Arabia’s decision to cut bank production.

The movement of the commodity market seems to me to be contradictory to the higher interest rates and talk of tightening in the US, which are based on the idea that US growth may be faster than had been expected now that the Democrats have control of the US government. I would expect commodities – and the commodity currencies – to come back strongly if the higher US growth outlook does indeed pan out. 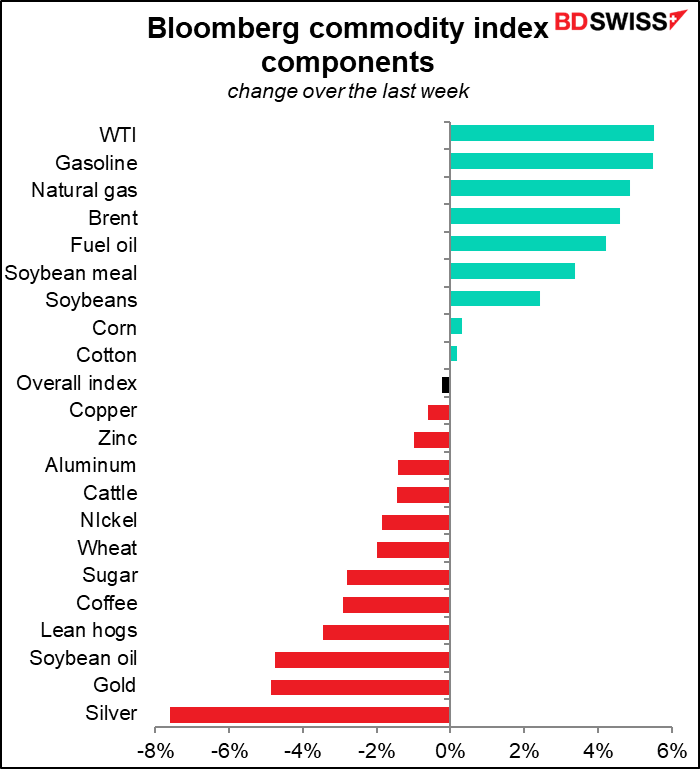 Emerging market currencies have also been battered by higher US interest rates and lower commodity prices. 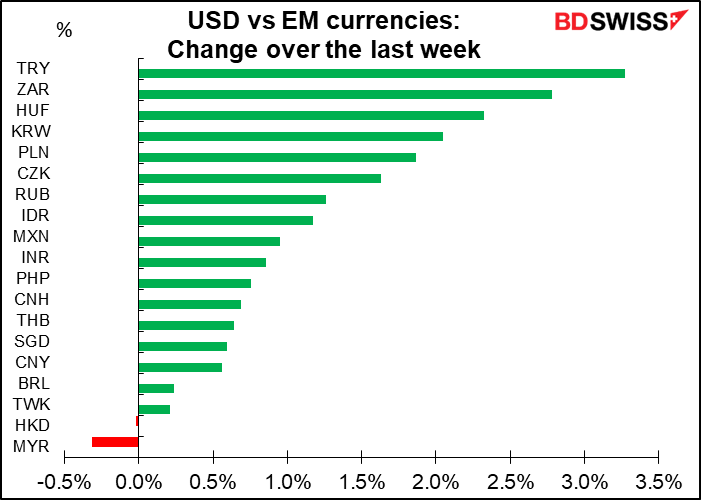 I have to admit, I’m stumped as to why GBP is the best-performing currency. On the contrary most of the fundamental factors seem to add up to a weaker currency, and indeed it did weaken during the European day yesterday, but then recovered once the US market started up.

Bank of England Monetary Policy Committee member Tenreyro delivered a speech concerning negative rates in which she said it’s possible more stimulus will be needed, looser monetary policy can help the economy recover, it’s not too late to consider negative rates, etc etc.  The overnight index swap (OIS) contracts remain priced for a full 10bp cut by September, although the probability for action from the BoE at the next meeting in February fell slightly to 71% from 75%. Meanwhile there’s some discussion that the country may need an even tighter lockdown as the new more virulent mutation of the virus spreads.

The only things I can see that are positive for the pound are a) a bit of mean reversion after the recent losses, and b) higher interest rates as the selloff in UK rates continued, coupled with bear-steepening of the yield curve. There also seems to have been some buying of GBP vs EUR.

Finally, the most excitement of the day was in Bitcoin. At its peak on Friday it was up an astonishing 45% this year alone, but at its low yesterday it was down some 28% from that level. It’s since recovered to down only 13% from the peak (up 20% from the bottom). That’s amazingly volatie. I don’t usually cover Bitcoin because it’s not subject to fundamental analysis – it’s all sentiment and technicals. I can only surmise that the people getting spooked about Twitter and Facebook and other tech stocks yesterday were really getting spooked about Bitcoin after its astonishing runup.

Well, if yesterday wasn’t a very busy day, today is even less busy. There’s nothing on the schedule until the US comes in, and even then it’s just two second-tier indicators.

The sentiment index of the National Federation of Independent Business (NFIB), the small business group, is expected to fall. Their hiring plans index, which is already out, fell too. 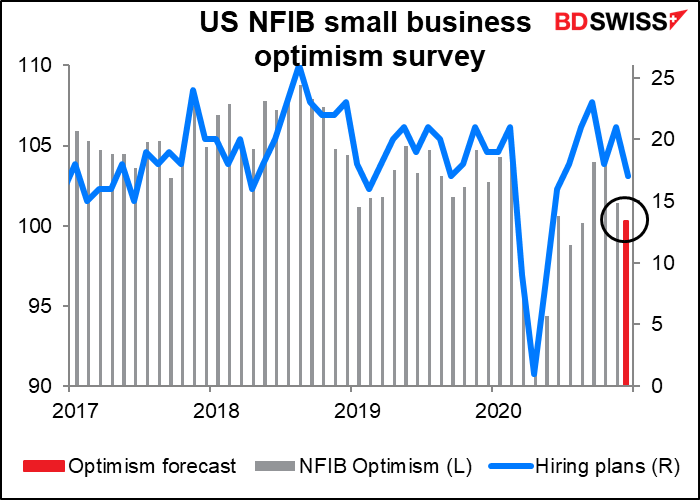 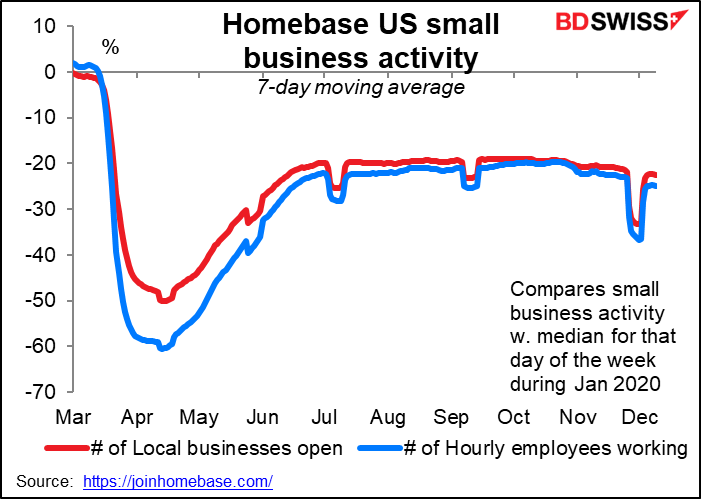 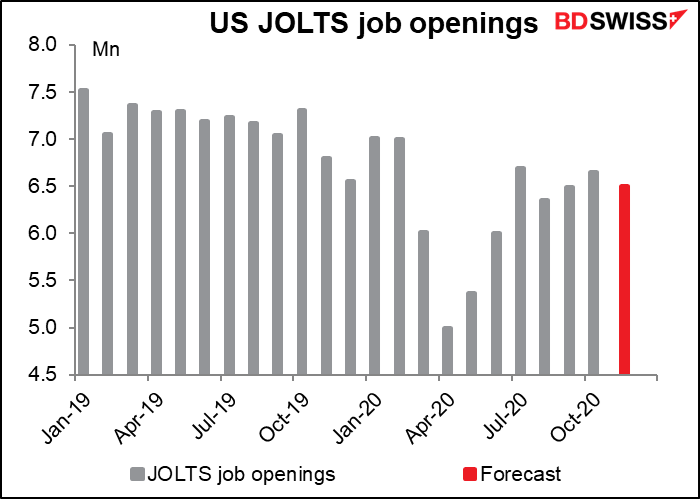 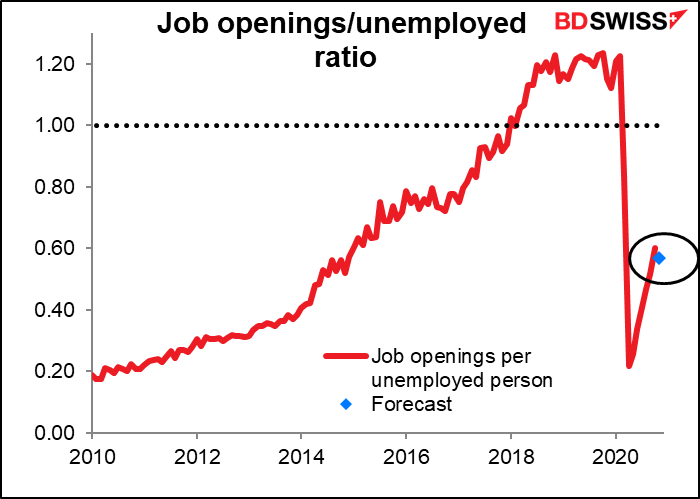 There’s no forecast available for Australian job vacancies. Still it bears watching, like the JOLTS report, just to see how the labor market is doing, especially because the Reserve Bank of Australia (RBA) has effectively given the job market priority over inflation.

In any case, I do hope this is the last graph like this that I have to make. 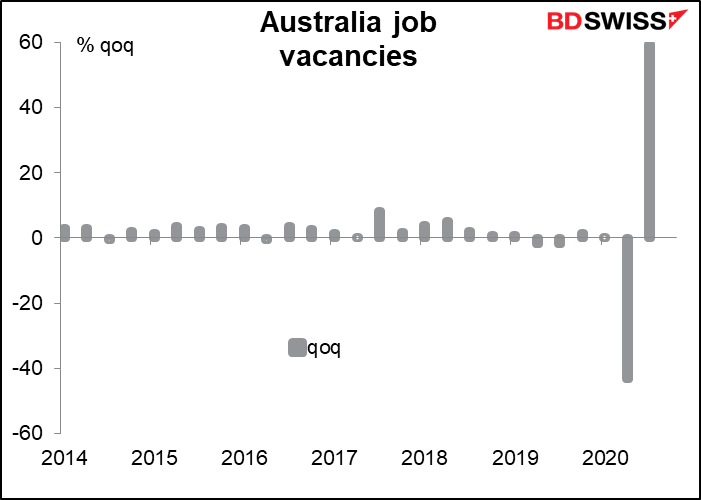 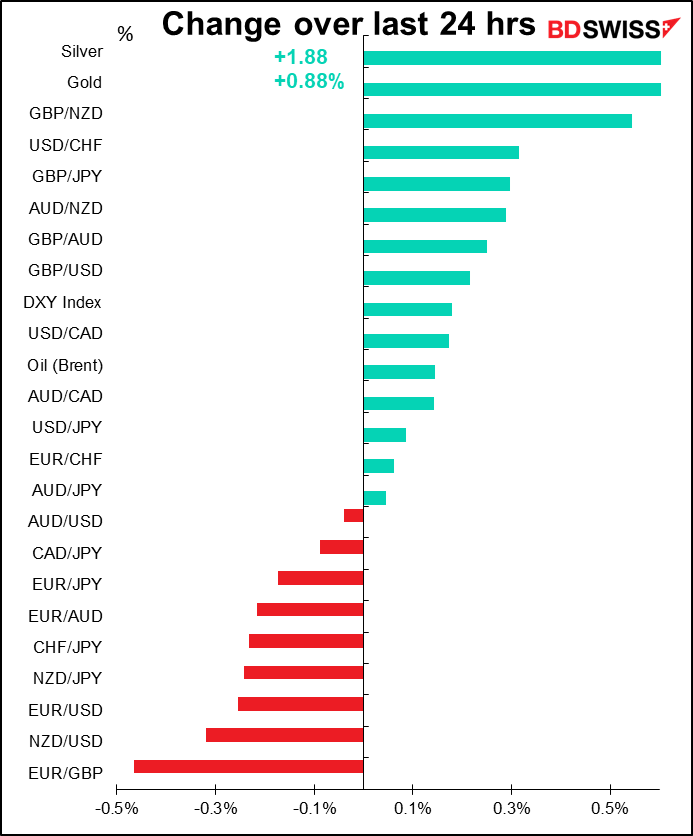