You are at:Home»MARKET PREVIEW»USD, JPY up on Flight-to-Safety, EUR down on ECB; EU GDP & CPI, US Personal Income & Spending 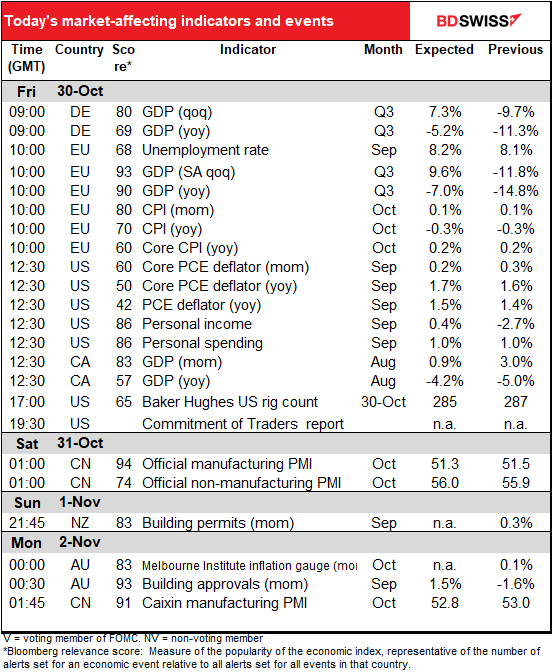 I had expected the European Central Bank (ECB) to signal some sort of easing measures at its December meeting, but I didn’t expect them to basically stand up on the table and shout it through a megaphone. Well, at least the central bank equivalent of that.

Although they kept all their rates & policy measures unchanged,  the statement released immediately following the meeting said that the risks are “clearly pointed to the downside.” The new economic forecasts that the ECB staff will produce for the December meeting “will allow a thorough reassessment of the economic outlook.” “The Governing Council will accordingly “recalibrate its instruments, as appropriate, to respond to the unfolding [pandemic]situation and to ensure that financing conditions remain favourable to support the economic recovery and counteract the negative impact of the pandemic on the projected inflation path.” That’s as clear a promise as you’re going to get from a central bank.

In the press conference, ECB President Lagarde noted a clear deterioration in the outlook as the European economy is losing momentum more rapidly than expected. She stressed that the decision was unanimous that “action will be needed and that recalibration is the right approach, to the extent that it applies to all our instruments in all their dimensions.” This is the first time there’s ever been a unanimous decision to act at the next meeting.

What is meant by recalibration? A total rethink of their operations, apparently.

What we mean to say is; determine, instrument by instrument, a mix of instruments together, what is going to be the optimal response under the current circumstances and given the outlook that we are facing and that we will be facing with the new projections. Will that mean an increase? Will that mean an extension? Will that mean a variation of the terms of such or such other programmes? Will it mean a revision of some of the collaterals? All of it will be looked at, clearly, and recalibration there will be.

Elsewhere she suggested that the focus will be on “maintaining favourable financing conditions,” which would argue for more temporary long-term refinancing operations (TLTROs), which compensate banks for making cheap loans, and also through the Pandemic Emergency Purchase Program (PEPP), one of their quantitative easing (QE) programs, rather than through lowering interest rates further. The ECB’s research indicates that QE measures have a strong impact on the exchange rate, so we can expect their recalibration to weaken the euro – as it already has in anticipation of the fact. (Although much of yesterday’s EUR losses took place before the meeting, due to a stronger USD.)

Elsewhere it was a “risk-off” day as equity markets around the world tumbled. US markets managed to close higher somehow, but the rout has resumed this morning in Asia. Every stock market in Asia is lower – my screen is flashing nothing but red. The S&P 500 is indicated down 1.9% at the time of writing, thanks in part to some disappointing figures or commentary from the big tech stocks, reversing gains made during trading hours.

Apple was up sharply during trading hours but fell over -4% after the close after revealing that its iPhone revenues fell -21% thanks to a plunge in revenues from China. Amazon was down nearly -2% after the company’s CFO indicated a big rise in covid-related expenses. Facebook also fell, although Alphabet, Google’s parent company, rose sharply on higher digital advertising profits.

It’s no surprise then that the safe-haven JPY and USD are the top performers. What is surprising to me is that the commodity currencies haven’t fallen more, especially as oil and gold continue to fall.

GBP fell about as much as the euro, but this wasn’t due to any Brexit news as there wasn’t any. The negotiations are continuing intensively and they are maintaining secrecy, which suggests to me that they might be making progress. We did hear from EU Commission President von der Leyen that the Brexit talks are ‘making good progress’ and are now “boiling down to the two topics that are the most important – Level Playing Field and fisheries.” Those were the big problems before too so it’s no big news. European Council President Michel said they would probably assess the state of the talks next week with Brussels hoping to start the ratification process in mid-November. That should be positive for sterling, if indeed it happens.

Busy busy day today! We start off with the GDP figures from several of the European countries, including France, Germany, Austria, Spain and Italy, culminating in the EU-wide GDP at 10:00 GMT.

The figures are expected to show a pretty solid rebound in activity in Q3, but after hearing all the dire comments about the prospects for the Eurozone economy at yesterday’s European Central Bank (ECB) meeting, I’m not sure anyone will care about the past – it’s the future that matters. 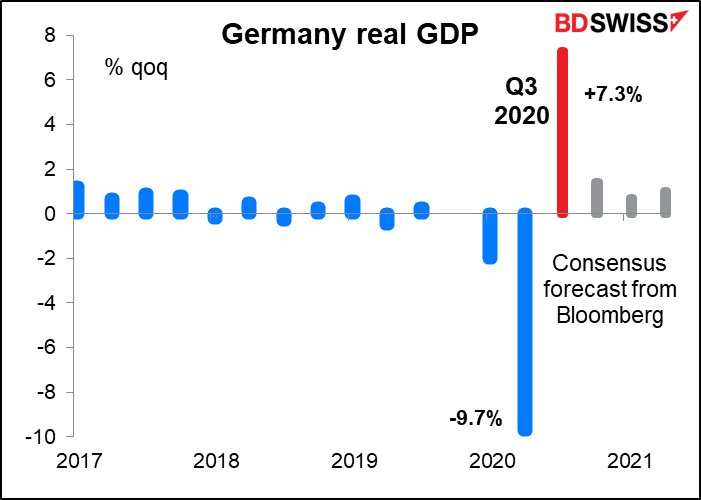 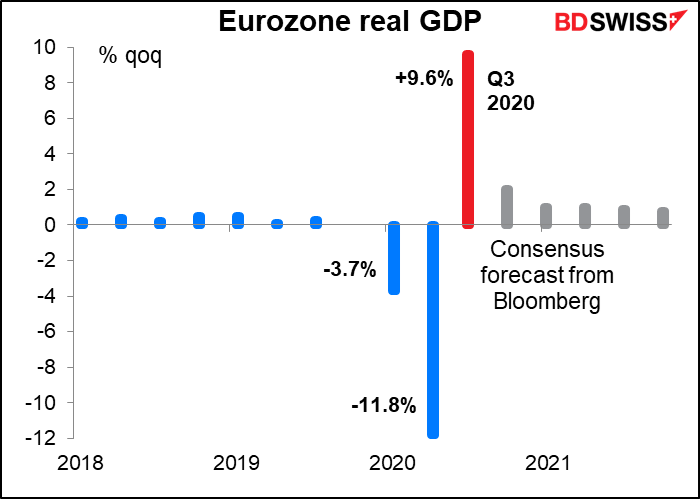 Then comes the Eurozone consumer price index (CPI). The yoy rate of change is expected to remain the same, but after the larger-than-expected decline in German inflation yesterday (-0.5% yoy vs -0.4% expected) maybe we’ll have a surprise. In any case the ECB almost promised further loosening in December, so this would only confirm people’s views, not change them. 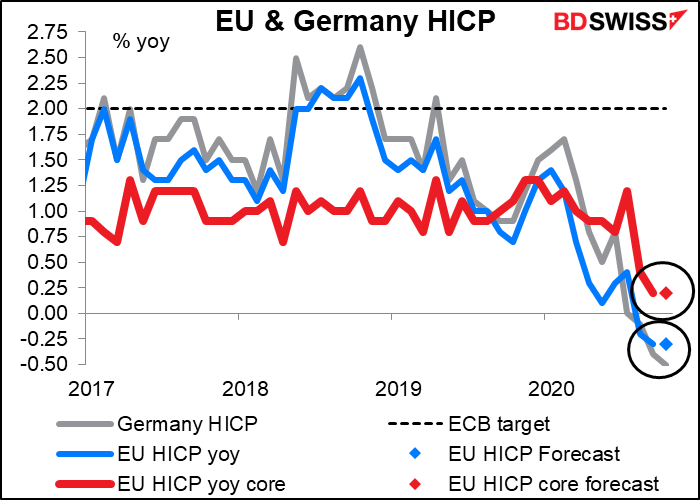 After several months of extreme movements, US personal income & spending are expected to fall back into more regular changes. Both are expected to be higher this month, which is definitely a good thing. The main question though is how long it can last, since millions of people’s unemployment insurance will run out at the end of the year. 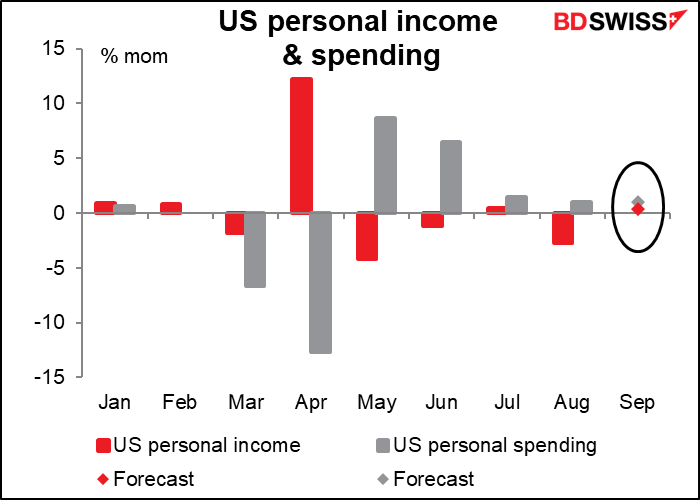 Personal income is still above pre-pandemic levels, thanks to the unemployment insurance. Of course what’s true in the aggregate isn’t necessarily true at the individual level. A lot of people are suffering badly. 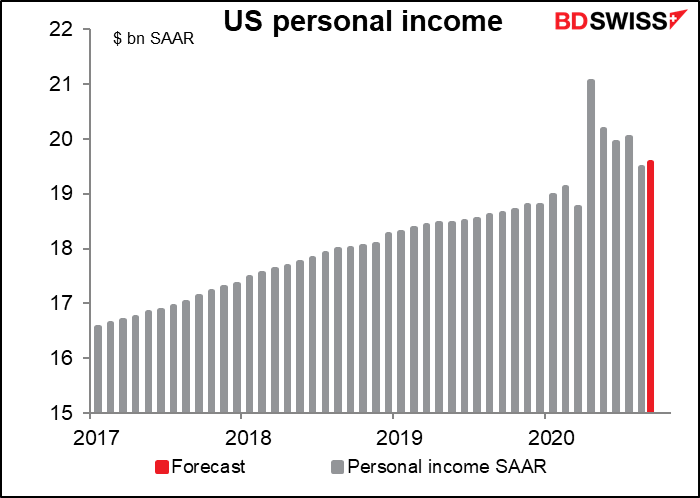 Meanwhile, spending remains below pre-pandemic levels but is creeping up. 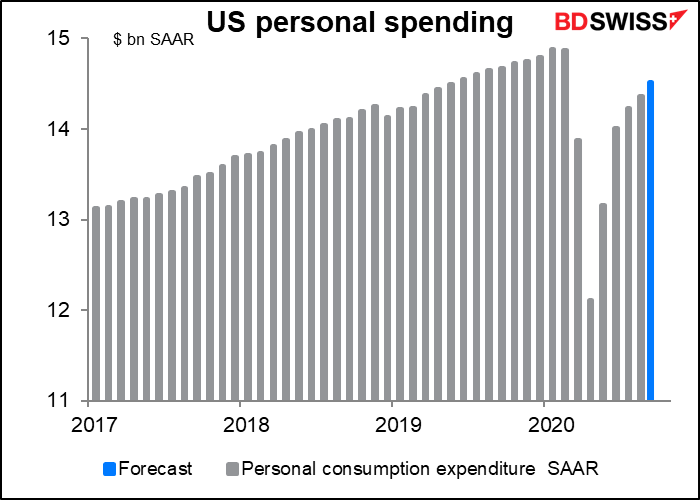 Inflation as measured by the personal consumption expenditure (PCE) deflators is expected to accelerate a notch on a yoy basis, but no one is particularly concerned about inflation nowadays. If anything, this would reduce real yields and therefore be negative for the dollar. 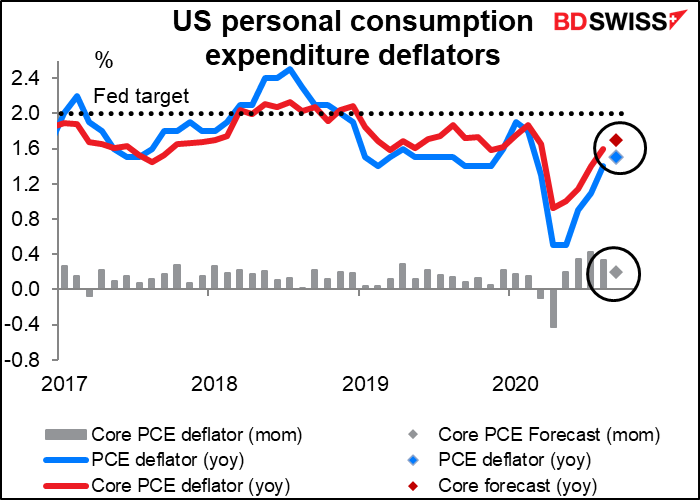 Canada’s August GDP figure is expected to show a slowdown in growth. I think that’s pretty universal around the world as the rebound from the plunge fades. 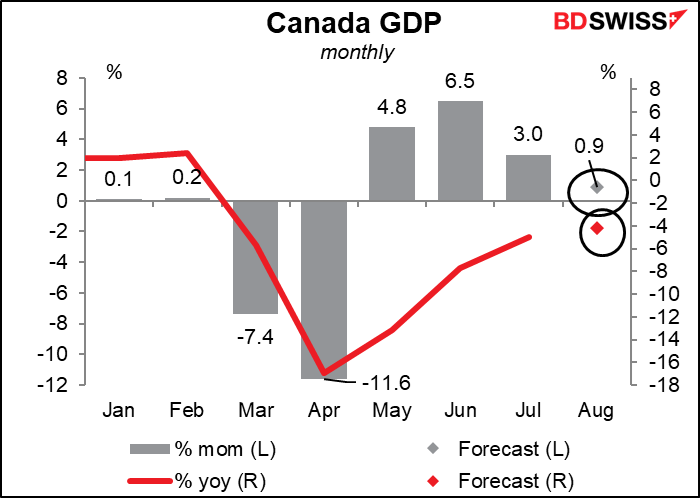 If we look at the level of GDP though it’s still 1.3% below pre-pandemic levels so there’s still a lot of hardship, clearly. 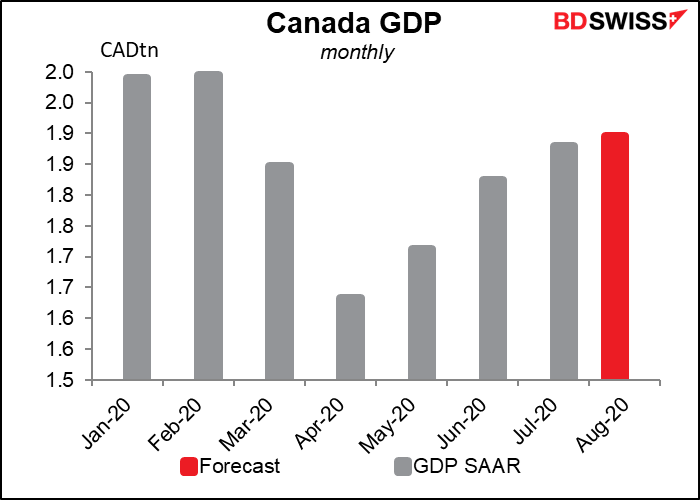 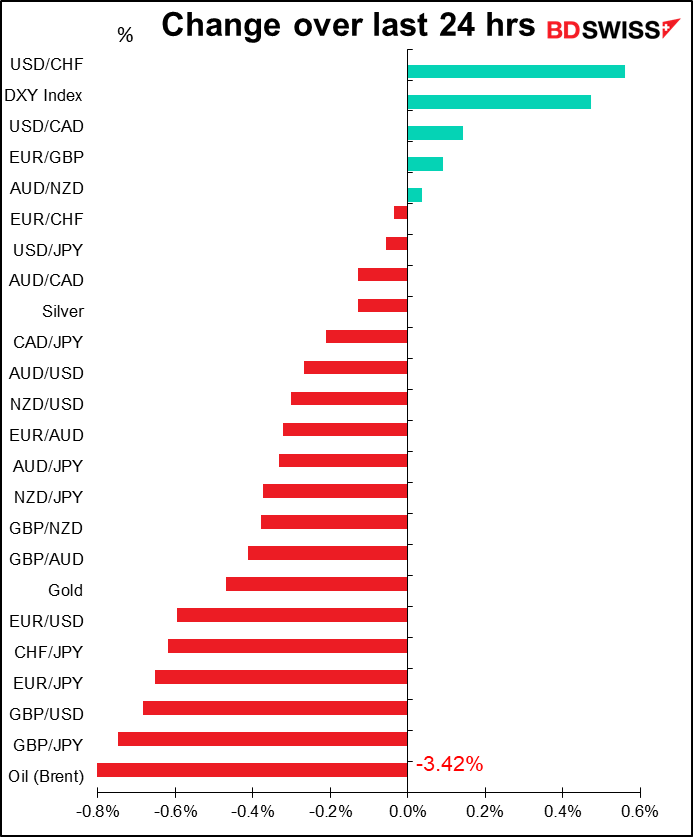