You are at:Home»MARKET PREVIEW»USD, JPY Up, Commodity Currencies Down on Flight to Safety; Japan employment data 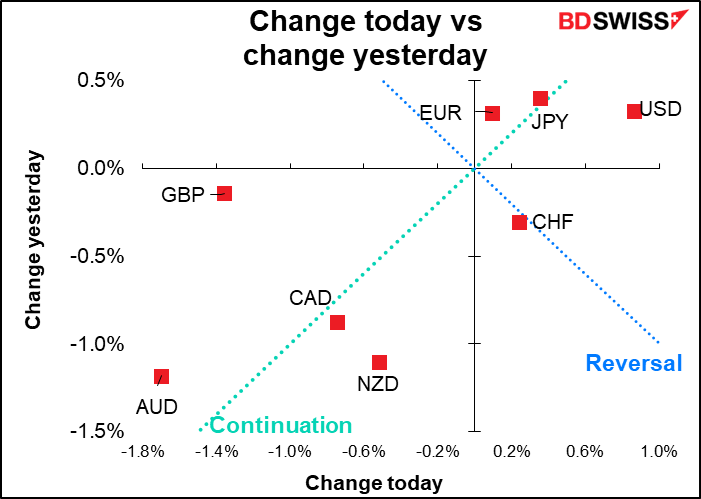 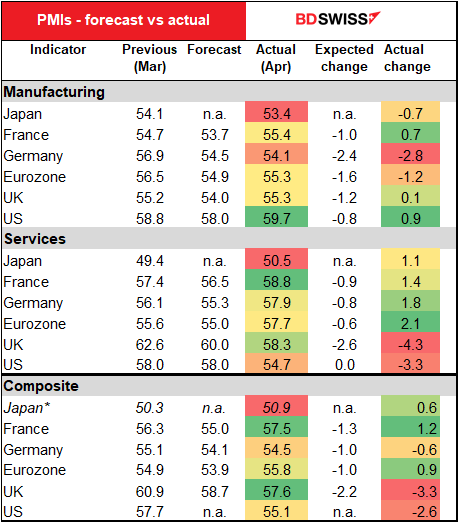 French President Macron won a second term, the first French president to achieve that goal in two decades. Preliminary results suggest he performed better than had been expected from the polls that appeared right before the election, although he didn’t do as well as he did in 2017. 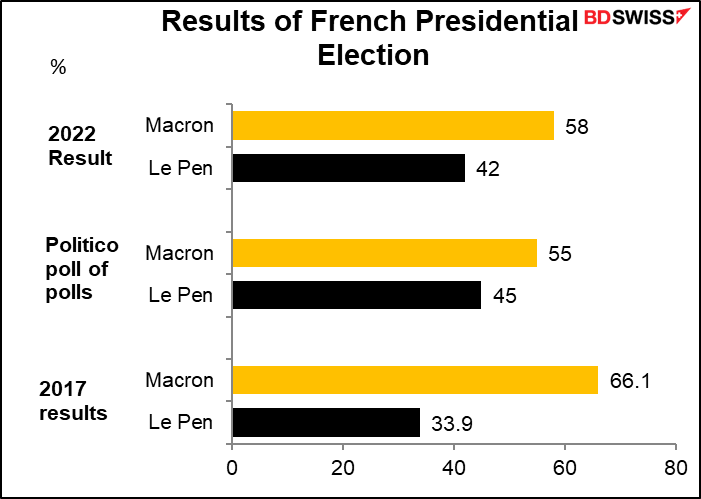 Macron’s win was good news for Europe, as voters rejected Le Pen and her anti-EU, anti-NATO position. There was also good news from Slovenia, where the country’s prime minister, Janez Jansa, a Trump admirer, appears to have lost the election to centrist rivals.

Nonetheless the news didn’t do much for EUR. Currencies are being driven by monetary policy divergence. The expected tightening of US policy is what’s driving markets. Speaking on an IMF panel last week in his last remarks before Fed officials enter their “blackout” period, Fed Chair Powell supported the idea of front-loading the hiking cycle and getting the Fed’s policy rate, the fed funds rate, back to neutral as quickly as possible. Markets are now pricing in more than 50 bps of hikes at the next three meetings of the rate-setting Federal Open Market Committee (FOMC). 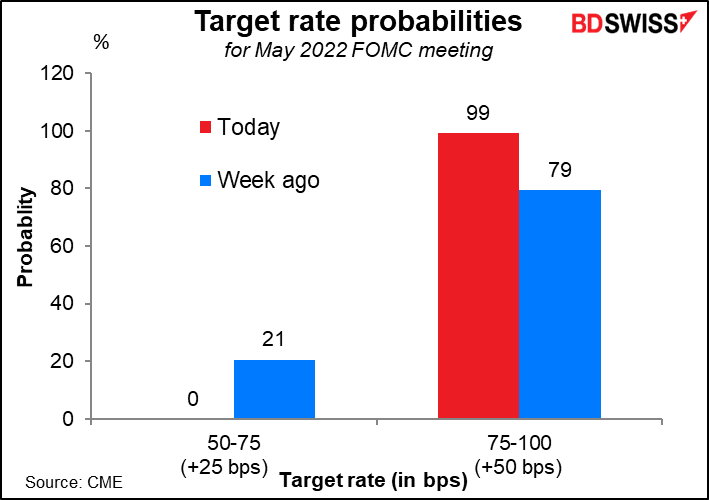 …and another 50 bps hike at the June 15th meeting. That’s a change over the last week. 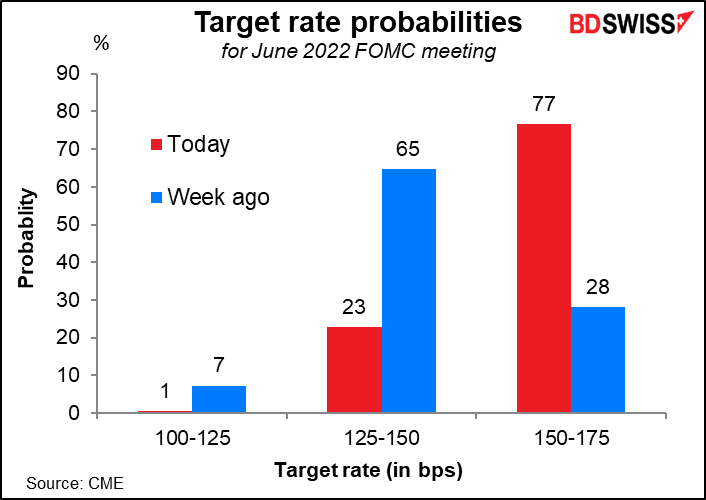 Plus a third 50 bps hike at the July meeting! A big change from a week ago. 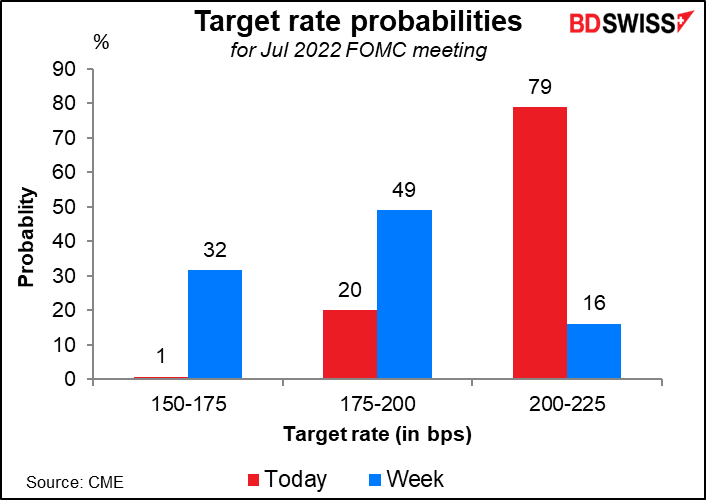 Speaking on the same panel, European Central Bank (ECB) President Lagarde noted that there are differences between Europe’s situation and the US, as she has before, but nevertheless didn’t rule out an increase in ECB policy rates as early as July. Other ECB Governing Council members have also mentioned July as a possibility. The market is now pricing in 26 bps of tightening by the July meeting and a total of 91 bps of tightening this year. 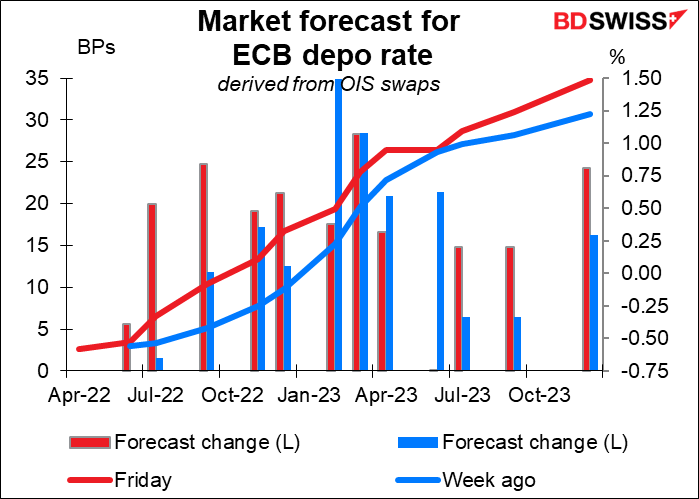 Fear of tightening sent stock markets lower across the globe on Friday. All Asian markets are lower today as are all European markets. This is causing a “risk-off” mood that’s dampened demand for AUD and other commodity currencies.

In addition, the further lockdown in China is affecting views on oil and other commodities. If people can’t leave their homes they won’t need to drive anywhere. Nor can construction workers build new homes. 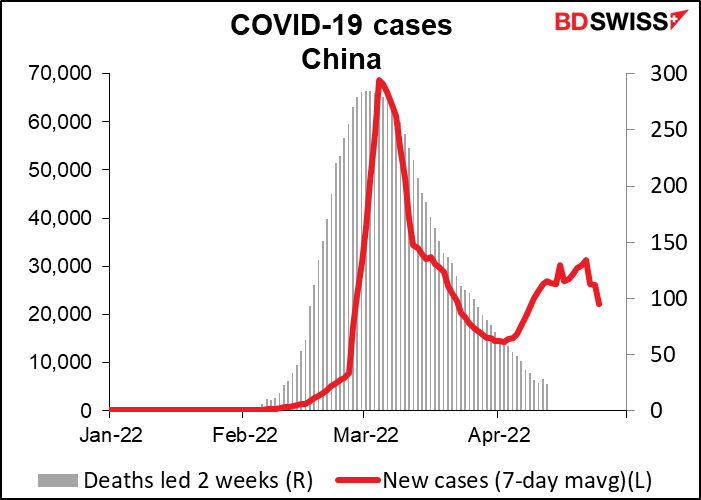 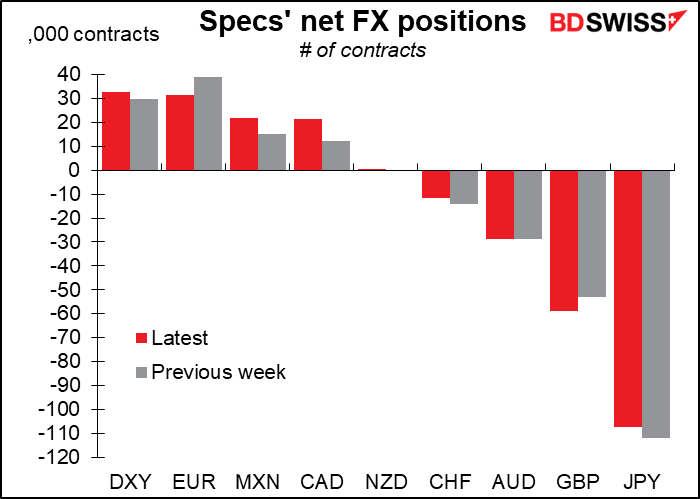 Hedge funds had several small but significant moves, namely they switched from short CAD to long CAD and from long EUR to short EUR. They almost closed out their short NZD and short CHF positions. They also trimmed their short AUD and JPY positions. 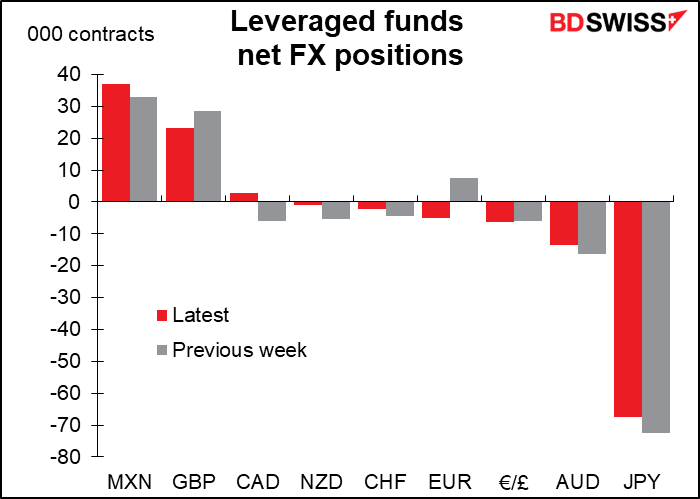 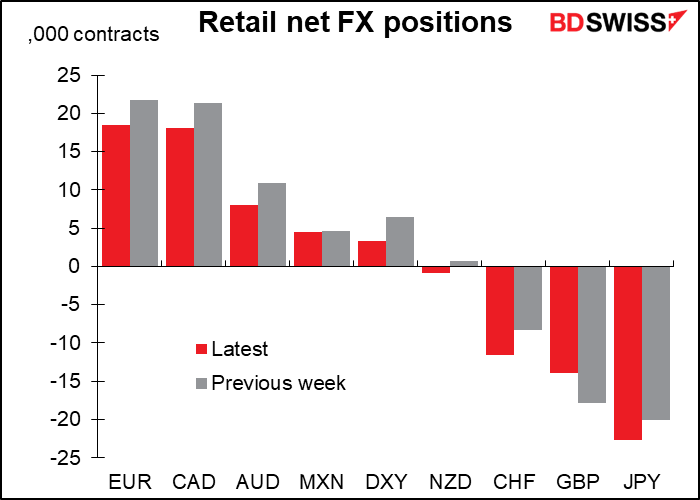 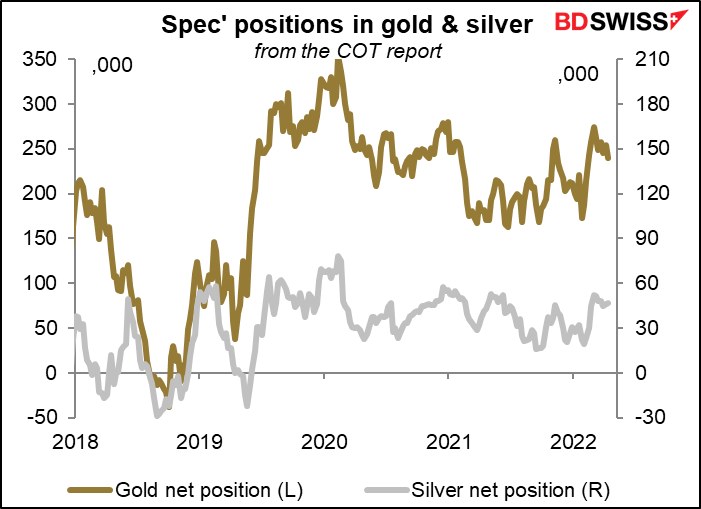 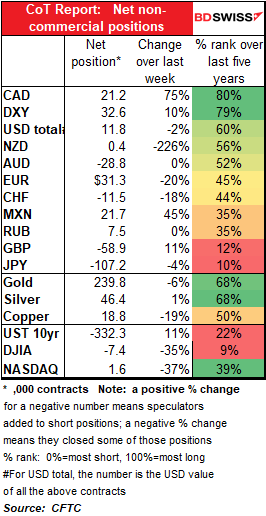 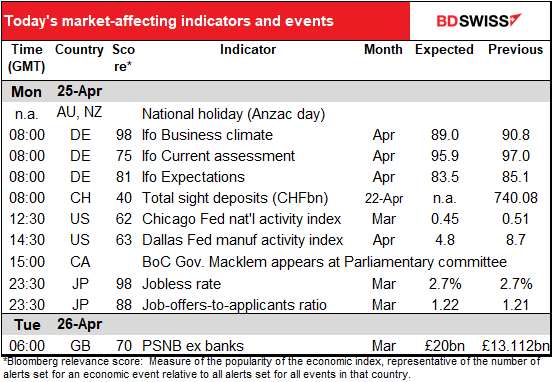 The European day starts with the Ifo business indices. (You get extra points if you’re not German and can tell me without googling what Ifo stands for.) Both the current sentiment and expectations are expected to decline, with expectations expected to fall more rapidly. The gap between the current situation and expectations is forecast to be 12.4 points – the widest since the pan-German Ifo index began in 2005. This is due to the war in Ukraine and its impact on German energy costs, no doubt. 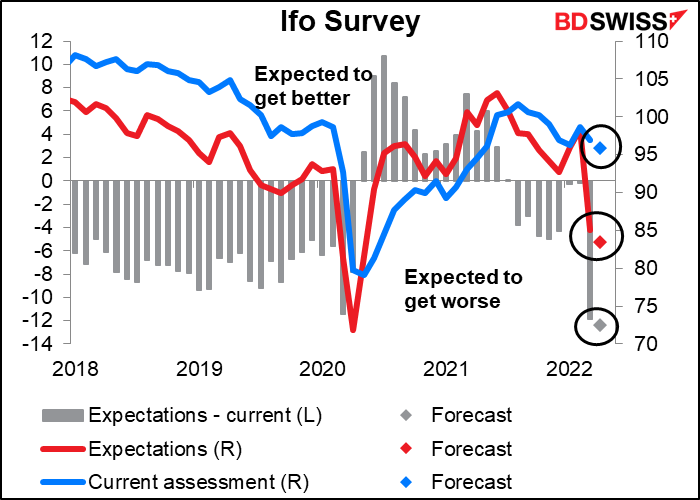 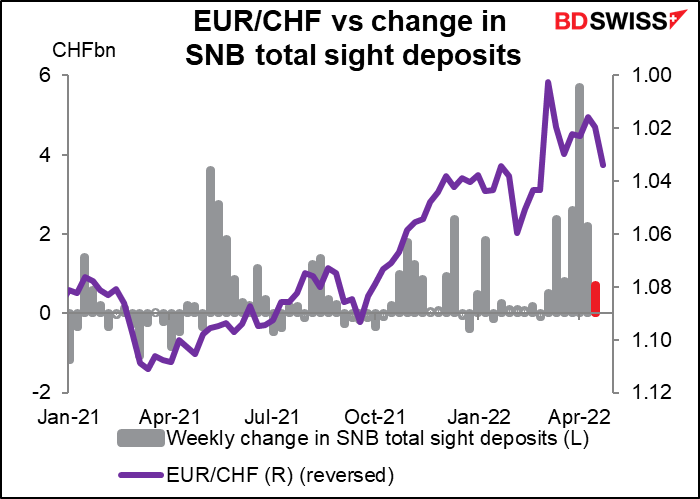 When the US starts up, we get the Chicago Fed National Activity Index (CFNAI). It’s different from the other regional Fed indices. It’s designed to gauge overall economic activity and related inflationary pressure on a national basis, not regional. A positive index reading corresponds to growth above trend and a negative index reading corresponds to growth below trend. However it’s difficult to interpret any one number, because the figures are so volatile. In this case it’s been pretty steady for the previous two months and this month is expected to be in line with the previous two, so I’d say it’s projecting pretty stable growth for the time being. USD+ 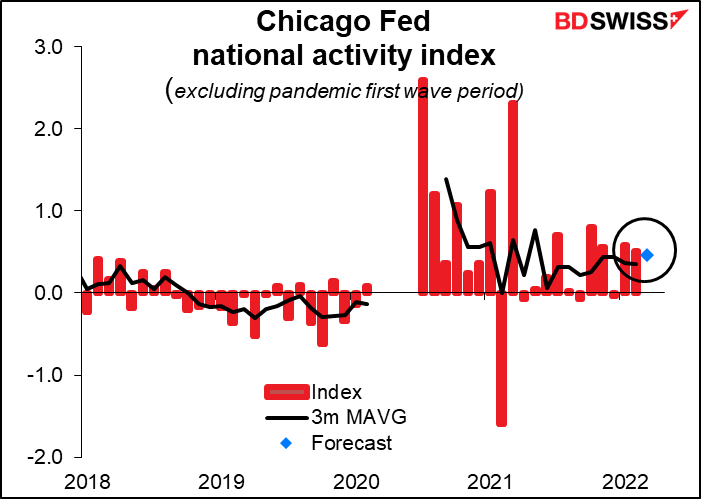 In contrast, I don’t pay much attention to the Dallas Fed index, because it’s so heavily affected by one industry, oil.

And that’s about it for the European and US days.

Overnight, Japan announces its jobless data, which has quite a high Bloomberg relevance score even though it’s among the least interesting indicators I follow (not very volatile at all, rarely moves more than one tic at a time). This time unemployment is expected to tic down one tic while the job-offers-to-applicants ratio is expected to move up a shocking two tics!! In any case it probably doesn’t matter. 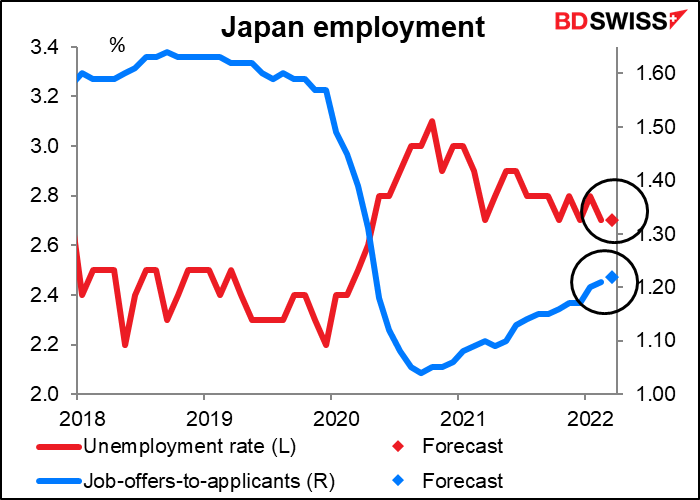 This might be a good indicator to trade as the yen does generally (but not always!) respond proportionately to whether the actual figure misses or beats the estimate. Watch the change in the unemployment rate, which has a much better correlation with the subsequent movement of USD/JPY than the job-offers-to-applicants ratio does.

Notice though a negative surprise as defined here would be unemployment being lower than expected, not higher. (We would consider that to be a positive surprise, but the definition used in this function for a  negative surprise is simply one that is lower than the estimate, regardless of whether that’s good or bad.) That for some reason tends to go along with a rise in USD/JPY! I must say this is counter-intuitive but that’s what the statistics say. This isn’t necessarily because it’s taking its cue from the stock market either. The change in the TOPIX index doesn’t have a very close correlation with the miss or beat and there’s no correlation between the change in the TOPIX index at any time horizon and the change in USD/JPY. 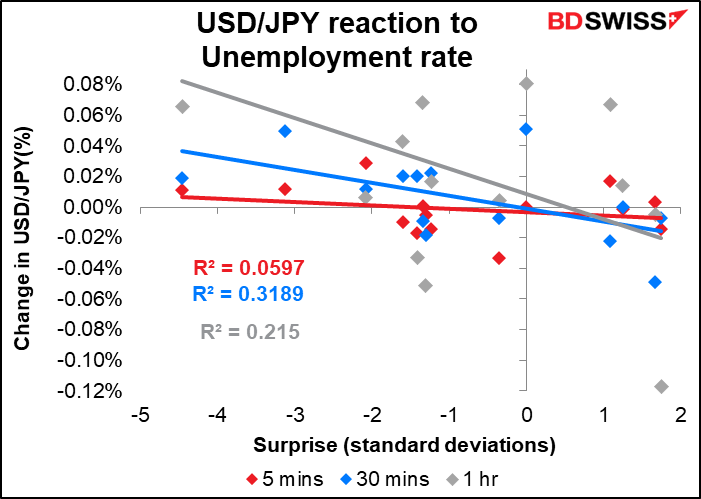 Then early Tuesday morning the UK public sector borrowing figures come out. They’re forecast to show the UK borrowing continued on a downward trend in March (at least the 12m moving average did – the figures aren’t seasonally adjusted so that’s a better indication of the trend than the month-to-month change.) 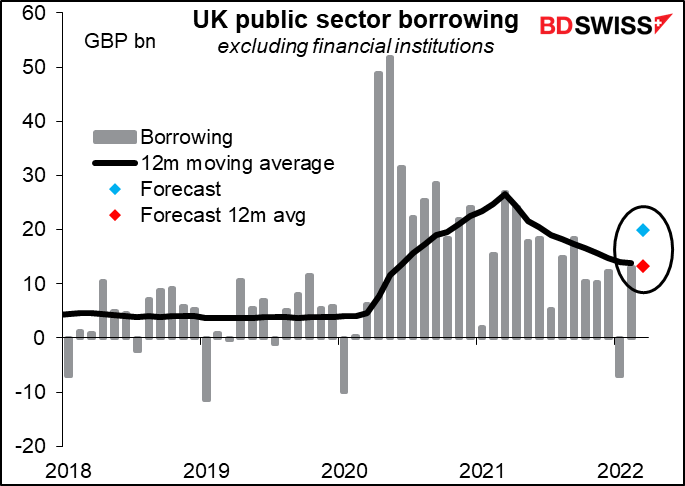 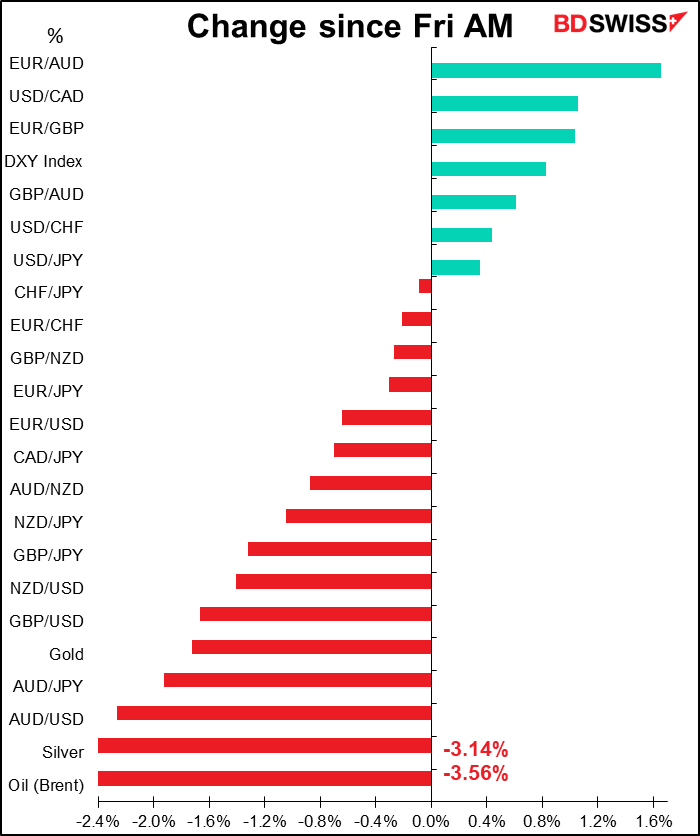