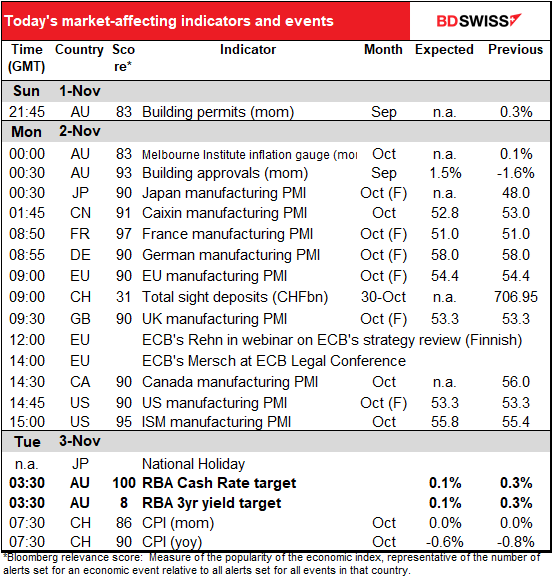 What I learned over the weekend: the biggest insight was this line from the Washington Post about the Senate races:

Neither side is certain of victory, and the quirks of each state’s vote-counting systems means it could be days, weeks or even a couple of months before senators know which party holds power over presidential appointments and sets the Senate agenda.

That would be dramatic. The new Senate is supposed to be seated on 6 January. What if there are two people trying to sit in one chair? What happens? I have no idea. But it obviously means more uncertainty for longer, which is never good for markets.

One reason it might take so long is explained by another WaPo headline:  Republicans shift from challenging rules to preparing to challenge individual ballots

In Nevada, the Trump campaign filed a lawsuit this week seeking images of the signature of every registered voter in Democratic-leaning Clark County — a potential first step toward challenging individual votes on grounds that the signed ballots don’t match the signatures on file…For months, Republicans have pushed largely unsuccessfully to limit new avenues for voting in the midst of the pandemic. But with next week’s election rapidly approaching, they have shifted their legal strategy in recent days to focus on tactics aimed at challenging ballots one by one, in some cases seeking to discard votes already cast during a swell of early voting.

The purpose of these challenges is twofold:  one, to disqualify as many Democratic votes as possible, and two, to delay the final count for so long that the state legislature has to cut it short and declare a winner by the 14 December deadline. (How long would it take to check millions of signatures one-by-one?) In that case, the Republicans hope that their voters will have an advantage, because they voted more in person than by mail.

Axios went even further, reporting that  Trump is planning on declaring victory Tuesday night if it looks like he’s ahead. Trump’s team is preparing to falsely claim that mail-in ballots counted after Nov. 3 — a legitimate count expected to favor Democrats — are evidence of election fraud. Of course his declaring victory doesn’t mean anything, but it does set the country up for a huge political & legal battle over the votes, perhaps descending into chaos and violence. This would be a disaster. It drives home the fact that what’s important is not only who wins, but also their margin of victory. If Biden has a commanding lead Tuesday night, Trump won’t be able to do this, but if it’s a close contest, then I fully expect Republican scorched-earth tactics that are likely to precipitate a constitutional crisis.

The big hope is that we might have a good idea who won the presidential election fairly quickly, because Trump has a limited path to the winning number of electoral votes (270). If a couple of big states go against him early on, such as Florida or Texas, it becomes almost impossible for him to win. But for the Senate, it’s going to be state-by-state. And without Democratic control of the Senate, the US is stuck with the same gridlock that it suffers from now. Even worse perhaps as the Republicans would be likely to dig in their heels to make life more difficult for a Democratic president.

Stocks were lower in a “risk-off” mood Friday, but this morning in Asia most markets are higher (most, but not all). USD benefitted in this risk-off environment.

EUR on the other hand is depressed in part as the counterpart to USD strength, part due to the lockdowns in Europe, which are raising fears of a slowdown in growth there.

These lockdowns and their threat to growth coincide with Libya ramping up its oil production.  Oil fell as a result, breaking through some stops which caused further selling and pushed it to a five-month low. The commodity currencies were dragged down with it

AUD has the additional burden of a likely further loosening of monetary policy tomorrow morning (see below). 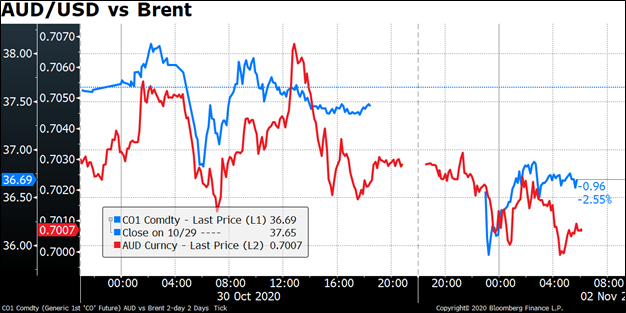 GBP was boosted by reports that a compromise is emerging on the thorny issue of what access EU boats will have to UK fishing waters, according to Bloomberg. A compromise on that difficult matter would solve one of the major obstacles to a Brexit agreement. It’s clearly GBP-positive if true.

The significant point is that GBP was up despite the the UK government’s unexpected announcement over the weekend of a second national lockdown. This implies either that Brexit is the more important factor for sterling, or that the market is rewarding the UK government for taking the right decision from a long-term perspective. That’s what happened in Israel and New Zealand, for example, where strong measures to  stop the virus worked and were therefore rewarded by the market. Once the lockdown goes into effect fully this week, activity in the UK will be significantly more restricted than in most of continental Europe, where the recent measures to cope with the pandemic have generally been lighter. That will temporarily dampen UK growth but may set the stage for a better long-term recovery. That could cause EUR/GBP to fall (i.e. GBP to strengthen relative to EUR). 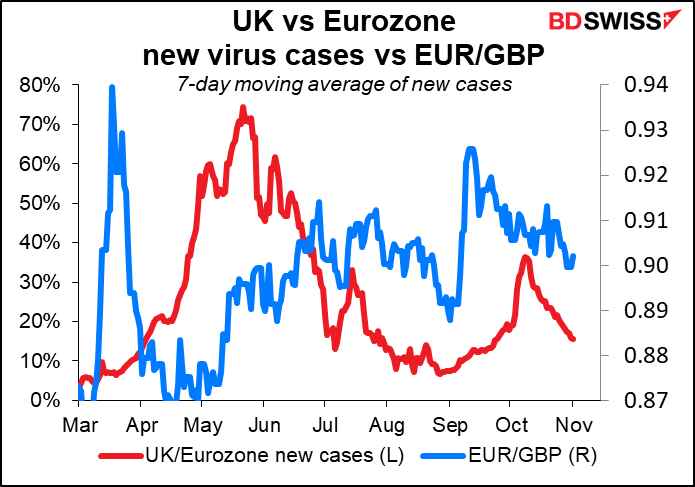 As usual, the week starts out with the weekly Swiss sight deposits. The Swiss National Bank seems to have come back in the market in the previous week. 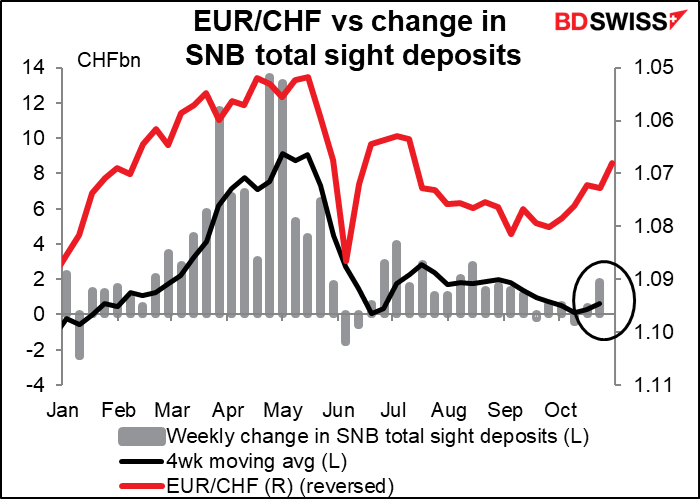 That means the focus today will be on the Institute of Supply Management (ISM) manufacturing PMI. It’s expected to rise a tiny bit (+0.4 point), which is more than the Markit version rose during the month (+0.1 point) but consistent with it. So I don’t think this should be any big surprise, nor should it have a noticeable impact on markets.

Besides, everyone in the US is totally preoccupied with the election! 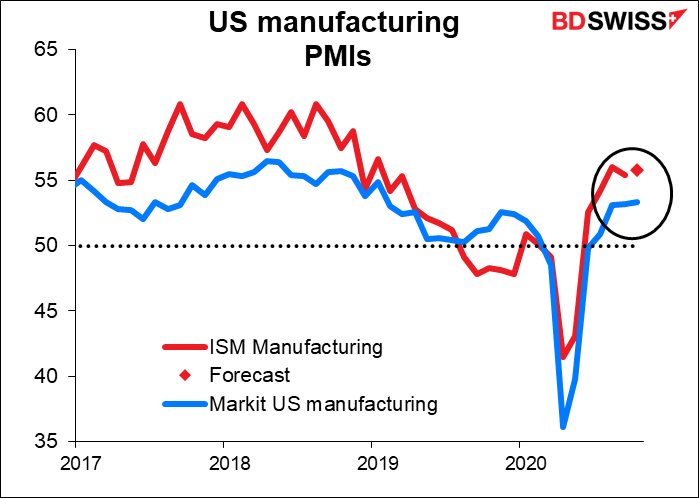 Then we have to wait for the Reserve Bank of Australia (RBA) meeting overnight. I dealt with this in my Weekly Outlook:  A Week to Remember  To repeat the conclusion, I expect the RBA to “recalibrate” its policy tools, as the European Central Bank put it recently. Possible measures include:

Market impact: could be big:  We have seen increased volatility on RBA days when they’ve changed rates. Then again, sometimes not, when the move was well telegraphed. Recently RBA days have had distinctly less-than-usual volatility. In this case, I think some move(s) is/are expected. The question is whether the RBA can beat estimates. If they can, we could be in for a volatile day. I think the moves are likely to weaken AUD. 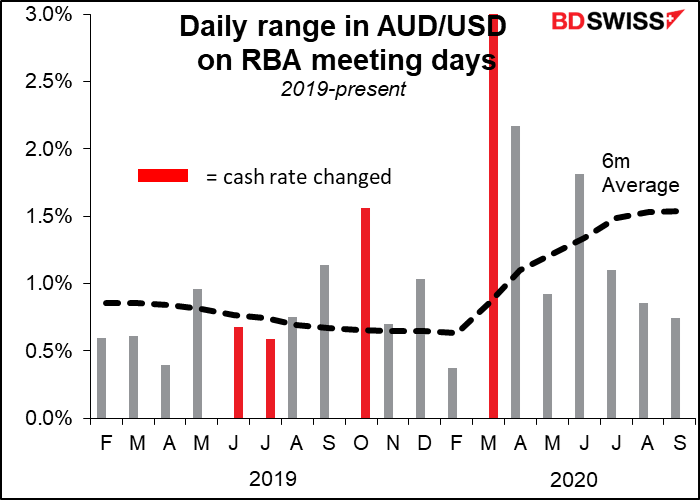 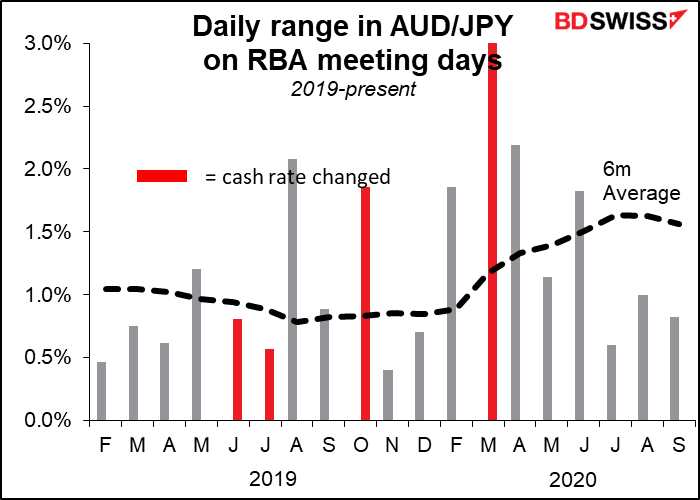 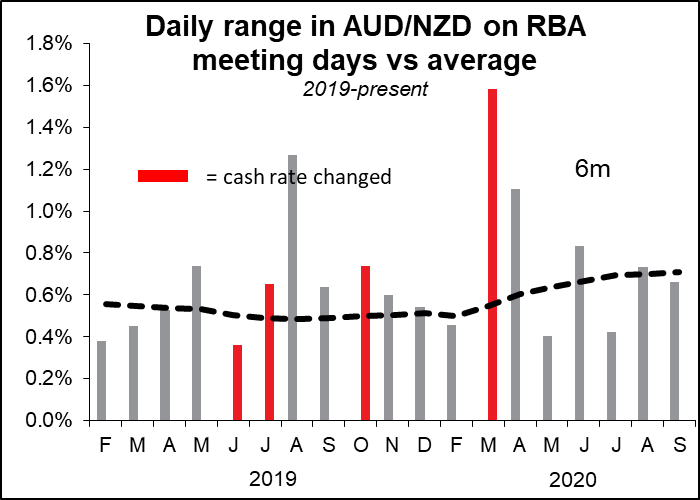 Finally, as dawn breaks over the Alps and gently kisses the sleeping faces of my beautiful wife and younger daughter, Switzerland announces its consumer price index. I’m not sure how much CHF reacts to Swiss economic indicators since the Swiss National Bank hasn’t changed its policy rate since 2015. But this does have a high Bloomberg relevance score so I thought I’d at least include a graph. Nonetheless I expect that the “risk-on” or “risk-off” mood is more important for determining the direction of CHF. 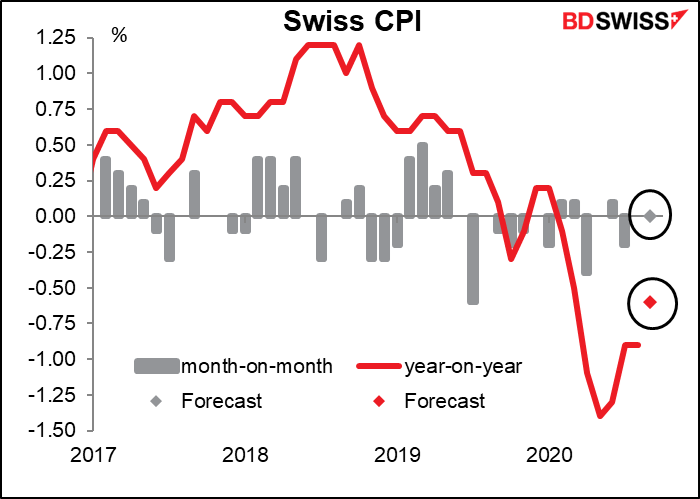 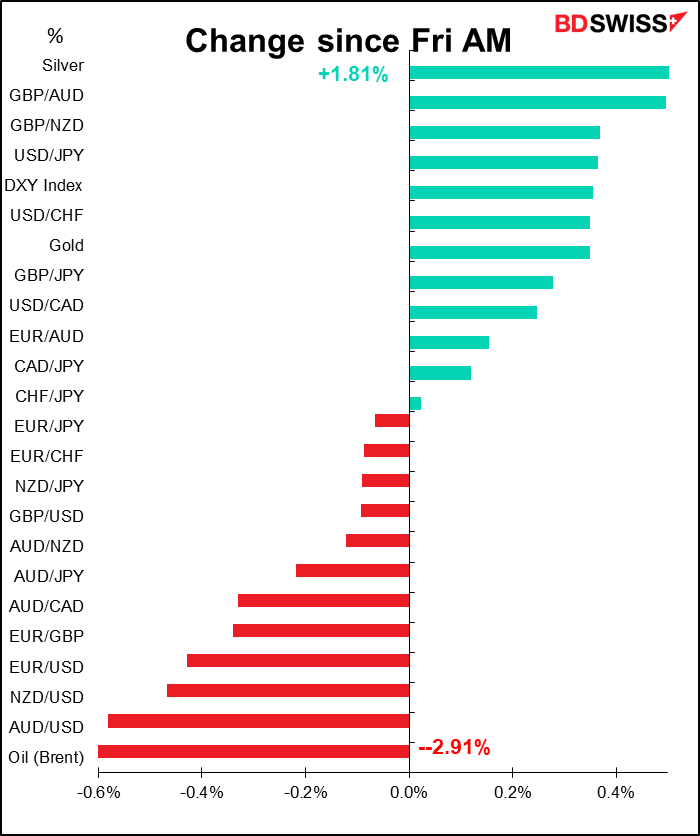