You are at:Home»MARKET PREVIEW»USD Falls as US Overtakes China in Virus Victims; US PCE Deflator

Collapse of the dollar! It’s happening just as I expected. Now that the surge in demand for dollars overseas has been met by the Fed’s new improved swap lines, economic and medical fundamentals are taking over. Face it:  the Trump regime has made a veritable dog’s dinner out of the preparations for this epidemic. The US now has more cases of COVID-19 than China did, and China has 3x the population. And it’s just getting started, thanks to the Very Stable Genius running the show.

The record 3.8mn jobless claims of course didn’t help matters any. But we didn’t see a big move in the US currency when that news came across. It was just general dollar selling all day.

One point to note from the jobless claims:  the two states that had the biggest increase in claims were Pennsylvania and Ohio, both of which voted for Trump last time.

The Fed’s balance sheet has surged in the last couple of days. It topped $5tn for the first time. 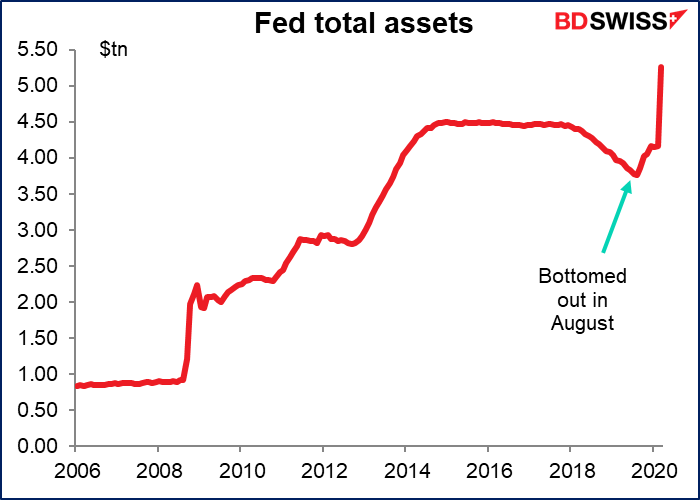 On the other hand, GBP gained vs USD for the third day in a row. I can’t see any particular reason why someone should buy pounds right now; on the contrary, the Bank of England Monetary Policy Committee (MPC) said that “there is a risk of longer-term damage to the economy, especially if there are business failures on a large scale or significant increases in unemployment.” The minutes also mentioned that “If needed, the MPC could expand asset purchases further” and the MPC “stood ready to respond further as necessary…”

I can only conclude then that market participants continue to buy back the most bombed-out currencies. (That would explain why NOK, which isn’t shown in my tables, was actually the best-performing G10 currency today.)

JPY was higher despite a general “risk on” mood in the markets. The S& P 500 closed up 6.2% but is indicated at the time of writing -0.7%. Most Asian stock markets are higher.

Oil fell further. It’s still above Monday’s opening level, but at this pace it will be worth nothing in the not-too-distant future.

Ordinarily I’d say today’s indicator was the biggest one of the week, but now? Inflation is the least of anyone’s worry.

The US personal consumption expenditure (PCE) deflator and its sub-index, the core PCE deflator. This, and not the consumer price index, is the Fed’s preferred inflation gauge. They didn’t spell out that they focus on the core PCE deflator, but it’s widely assumed because of various hints they’ve dropped over the years. That’s why I think that under normal circumstances, this is an important indicator. But right now central banks aren’t concerned about inflation or even deflation, they’re concerned about our survival as a species. So this indicator is of only passing interest now.

In any case, both the PCE deflators are expected to be +1.7% yoy. That would be an unchanged pace for the headline figure and a bit faster for the core rate. 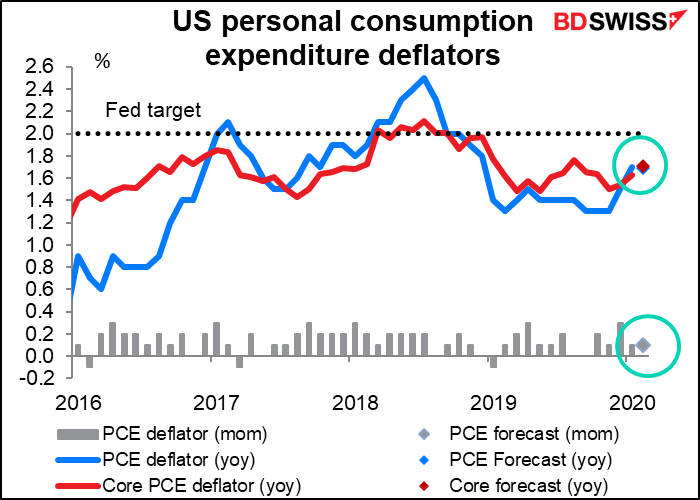 As for the personal income & spending, income is expected to grow a bit above trend and spending grow a bit below trend. Nice news but with 3.3mn newly unemployed people and no one able to go out of their house to go shopping anyway, what’s it going to be in March? 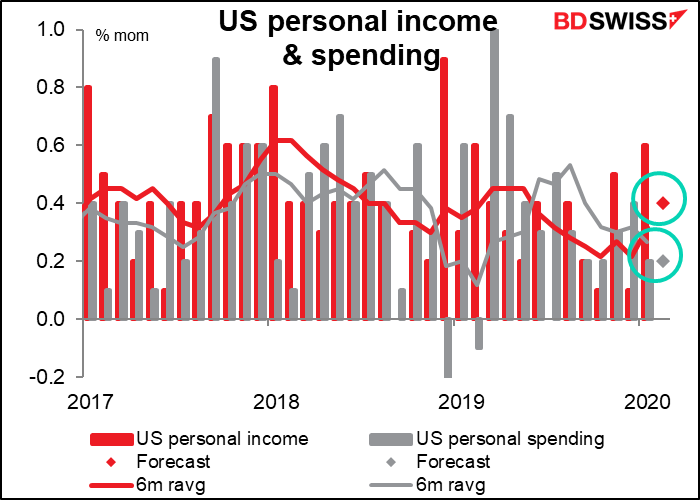 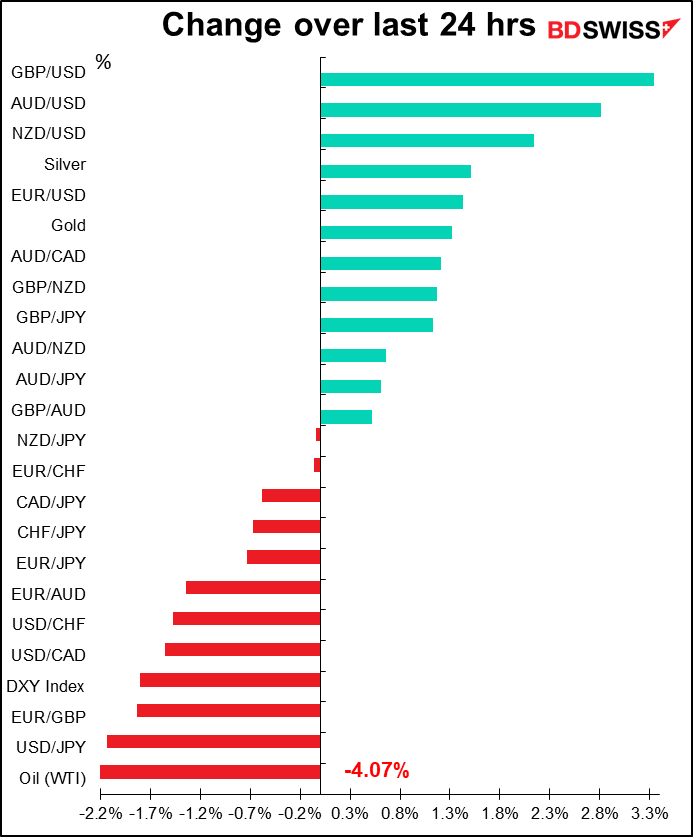