You are at:Home»MARKET PREVIEW»USD Down, Commodity Currencies Up as US Sentiment Sours; Lagarde, Bailey testimony 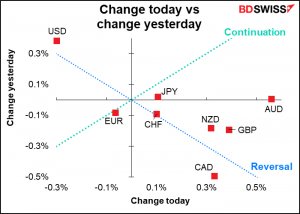 AUD was the main winner. I’d like to attribute it to the better-than-expected Chinese economic indicators out this morning, but in fact the big move came Friday when the U of M consumer sentiment index came out. It fell to 66.8, the lowest in exactly 10 years, from 71.7 instead of rising to 72.5 as expected. So the major impetus for the rise was the fall in the dollar, not necessarily anything good for the commodity currencies. 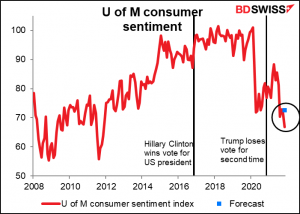 It’s noticeable that consumer sentiment declined further even though the pandemic seems to be abating. Sentiment was fairly closely aligned with the pandemic before, but now it seems to be related more to the inflation and especially higher gasoline prices that people face. 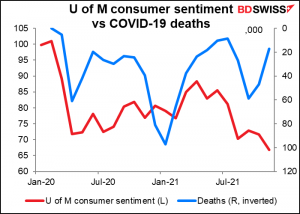 It’s my personal view though that a lot of the negative sentiment is due to the press constantly bombarding everyone with talk about what a miserable job President Biden is doing, despite the fact – fact — that he’s doing a great job and the main cause for higher gasoline prices was TFG pressuring Saudi Arabia and OPEC to cut oil production in order to rescue the US oil industry. As you can see, sentiment among Democrats is holding up a lot better than sentiment among Republicans, many of whom still believe President Biden stole the election etc etc. 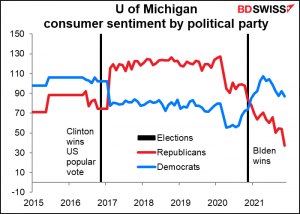 We’ll see how much real-world impact the worsening sentiment has when the US retail sales are announced tomorrow. The forecast for a relatively strong +1.3% mom increase in sales suggests that while people may say they’re unhappy, in fact they’re pretty confident about the future. The record quit rate in Friday’s Job Offers and Labor Turnover Survey (JOLTS) also suggests a lot of confidence in the future. So why the sad faces? Answer: constant bombardment by right-wing propaganda on top of higher gasoline prices.

I’m a bit perplexed though as to why GBP is #2 this morning. Bloomberg attributed the rise to “short-covering,” which is a good all-purpose excuse when you don’t know what the cause is (why were they covering their shorts? Could be closing out positions ahead of the weekend, but…)

In any event, the ever-falling level of the risk reversals suggests that the market is getting increasingly worried about the pound, which I suspect has something to do with the UK brinksmanship around Article 16. (Article 16 of the Brexit protocol sets out the process for taking unilateral “safeguard” measures if either the EU or UK concludes that the deal is leading to serious practical problems or causing diversion of trade with regards to Northern Ireland. Those safeguards would amount to suspending parts of the Brexit deal, which of course the EU wouldn’t look kindly upon.) 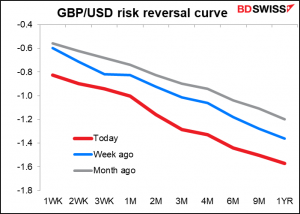 In case you need more evidence that economic fundamentals make no difference for Japan, the country’s GDP fell by a greater-than-expected 0.8% qoq (vs -0.2% expected) with both business spending and private consumption missing estimates – and inventory accumulation contributing more than expected. So bad all around. Yet JPY was slightly higher anyway. The assumption I guess is that the Bank of Japan can’t respond to anything at this point so there’s no point getting excited.

Also the fact that the TOPIX stock market index was up 0.35% anyway may give another hint as to the explanation: the government is set to reveal its fiscal stimulus package later this week and with growth sputtering, PM Kishida may decide to increase the size of the package. (The so-called “bad news is good news” phenomenon.) Also the figures were depressed by the so-called “state of emergency,” which was lifted at the end of September and the assumption is that activity will recover in Q4. Together with the tailwind of a large fiscal stimulus package (a staple of Japanese fiscal policy), that suggests a recovery in Q4 and after. 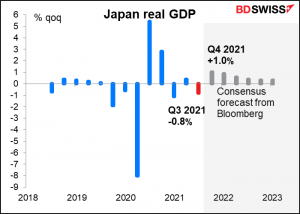 Still although Japan didn’t have the large downturn that some other countries did it also hasn’t recovered at the pace that they have either, meaning it’s a global laggard. Even the disastrous UK is expected to have outperformed Japan by the end of next year. 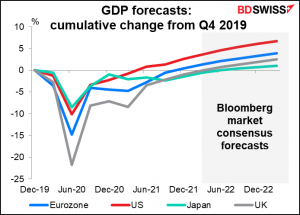 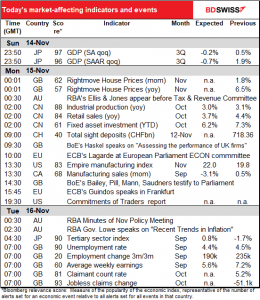 There are a number of speakers today. The main ones are:

ECB President Lagarde will make her fourth and final “Monetary Dialogue” for the year before the European Parliament’s ECON Committee. The main topics of debate will be: 1. The ECB’s Revised Inflation Target; 2. Inflation Measurement: Role of Owner-Occupied Housing Costs; and 3. Improving the ECB’s accountability framework.

Bank of England Gov. Bailey, BoE Chief Economist Pill, and Monetary Policy Committee members Mann and Saunders will testify to the Treasury Select Committee on the November Monetary Policy Report. Look for some detail on why they voted to keep rates unchanged. Saunders was one of the two who voted to raise rates (along with Ramsden) and will probably be grilled on that decision.

Overnight, Reserve Bank of Australia (RBA) Gov. Lowe will give a speech to the Australian Business Economists Webinar on “Recent Trends in Inflation.” I don’t think this webinar will be broadcast live, and the RBA’s website doesn’t say anything about posting the text, but it’s certainly a topic of great interest these days.

Aside from that, there are also some indicators.

Everyone is now simply riveted by the weekly Swiss sight deposits. The Swiss National Bank (SNB) has stepped up its intervention, but not enough to stop EUR/CHF from falling further (CHF appreciating vs EUR) and not as much as it did the last time EUR/CHF was at these levels. Is this a tacit approval of the FX market’s move? Are they just “smoothing” rather than “stopping”? It looks to me like they are and like EUR/CHF may continue its ineluctable decline. Tune in today for the next installment! 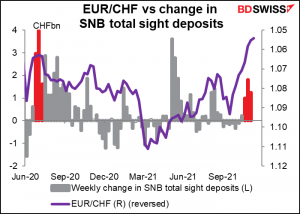 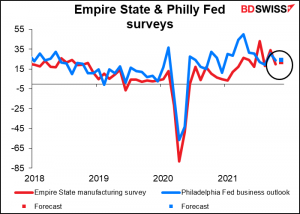 Investors will be scrutinizing the data to see whether the supply bottlenecks are easing or getting better. 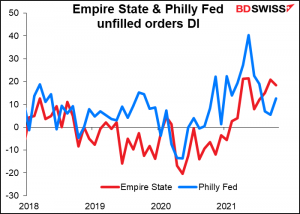 And of course what’s happening with prices. 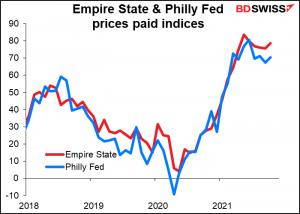 The Commitments of Traders (CoT) report that usually comes out Friday night comes out today because of last week’s Veteran’s Day holiday.

Overnight, Japan releases its tertiary sector index. The tertiary sector is the service sector. I don’t know why this is such a biggie when we also get the service-sector purchasing managers’ index (PMI) and the largely ignored Eco Watchers’ Survey, but it is. Expectations are for a modest rise in September, following two months of decline. The service sector has been hit by the (rather toothless) “States of Emergency” declared here and there throughout Japan, which bizarrely restrict the time bars have to close for example, rather than just closing these small, crowded, poorly ventilated places entirely. (Don’t ask me how I know so well what Japanese bars are like – just take my word for it.) 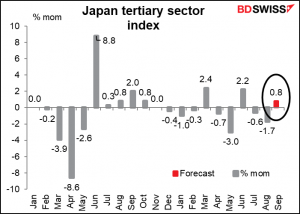 This forecast for the tertiary sector would put it exactly in line with the service-sector PMI for September. That’s significant because the PMI finally poked its nose above the 50 “boom or bust” line in October for the first time since the pandemic hit. Maybe next month the tertiary sector index will recover more strongly, too. 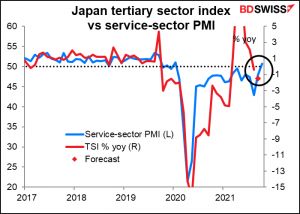 Then Tuesday morning at 7 o’clock as the day begins in London, Britain announces its employment data. Employment is expected to rise and the unemployment rate to fall.

This is a key indicator now because the Bank of England has focused a lot of its attention on the labor market as its key variable for deciding whether to raise rates. If it sees the unemployment rate falling despite the end of the government’s furlough scheme in September, and especially if it continues to see growth in average earnings running well above inflation, it may be more willing to trigger the oft-mooted “some modest tightening of monetary policy.” GBP+ 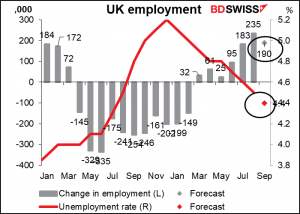 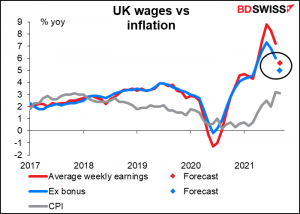 I present to you a graph of the jobless claims and claimant count rate. Even though the Office for National Statistics no longer believes these data are representative of the labor market and there are no forecasts available, they still have a high Bloomberg relevance number. 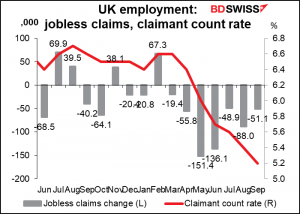 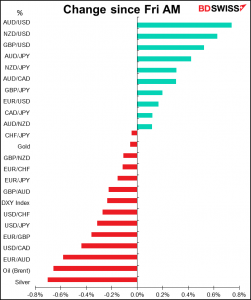