You are at:Home»MARKET PREVIEW»USD Down, CAD Up in “Risk-on” Rally after Biden wins; Not much on until UK Employment Data Tomorrow 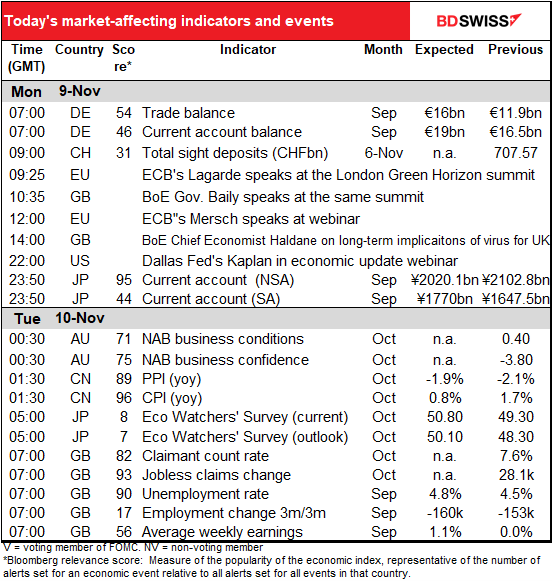 Well well well…It looks like it’s over! So far there are no signs of the expected assault via state legislatures. On the contrary, the Pennsylvania state Senate majority leader said they would “stay with the tradition of the popular vote winner getting the electors.” If Pennsylvania doesn’t go along, then Trump probably couldn’t get the votes this way even if some other states tried this kind of coup.

Much to my surprise, it now appears that the entire legal framework that that tactic is based on is not legally viable. According to two lawyers who argued a case about electors in front of the Supreme Court, “the Supreme Court has unanimously undercut the core premise to this argument for legislative superpower.” It boils down to this: since the showdown between President Bush and VP Gore in 2000, the Supreme Court has ruled that electors don’t have the right to vote the way they want but are required to vote in line with the popular vote in their state. If the electors are so constrained and can’t disregard the popular vote, then the state legislature is also similarly constrained.

I have to admit, this election looks like the Y2K of election results – an incredible amount of worrying about something that never happened. But then again, as one person involved in gaming out the possibilities ahead of time noted, it may be because of all the warnings and preparation that everything went smoothly.

(Why they didn’t write this article months ago, after various other articles had gotten millions of people concerned about this issue, I’ll never know. It would’ve saved me a lot of writing & worrying. And of course with three of the nine Supreme Court justices now Trump appointees, they might be able to reverse their earlier decision. But I doubt it.)

Trump is nonetheless trying to delay the certification in various states by calling for recounts etc. On Sunday he said, “Beginning Monday, our campaign will start prosecuting our case in court to ensure election laws are fully upheld and the rightful winner is seated.” And indeed they have filed suits in five states, but all of them have been rejected due to a complete lack of evidence. The courts aren’t biting, the legislatures aren’t cooperating and in any case Biden won too many states for this strategy to overturn the election. I think the disputes are just a fund-raising effort, plus a way to shield Trump from having to admit the truth: he lost.

Trump will probably never concede and will no doubt continue to insist that he won, just as he insisted that the crowd at his nomination was bigger than the crowd at President Obama’s and that Obama wasn’t born in the US. Nonetheless, like with the pandemic, he can deny reality but he can’t avoid it.

What will Trump do next?  I’ve thought he’ll probably leave the country, going somewhere that doesn’t have an extradition treaty with the US. He mused about that at a recent rally, saying “Could you imagine if I lose? I’m not going to feel so good. Maybe I’ll have to leave the country—I don’t know.” Barbara Res, who worked on construction projects for Trump for many years, was quoted in the New Yorker as saying if Trump lost, “he’ll never, ever acknowledge it—he’ll leave the country.” Mary Trump, his niece, said he’ll say, “I’m going to do something really important, like build the Trump Tower in Moscow.’” And indeed the Trump Organization renewed the TrumpTowerMoscow.com domain name in June.

However, Seth Abramson, author of several books on the Trump presidency, said he expects “a four-year Trump ‘shadow presidency’ coordinated from Mar-a-Lago and an eventual early-2021 announcement from Trump that he’s running for president in 2024.”  One purpose would be to impede any state or federal investigations of him, his businesses, or his associates – he could frame any such actions as political retribution against an active presidential candidate. And there are sure to be investigations – lots and lots of them. Trump may be out of office but he won’t be out of the news.

Stocks were little changed on Friday in the US as people waited to see the results of the election, but this morning it’s a big risk-on move, with almost all the Asian stock markets up sharply. Japan’s widely watched Nikkei stock index is at its highest level since 1991. (Of course part of that is due to the problems with the Nikkei, which is not a very good index. The TOPIX index, which is the one that professionals watch, is still below its recent high from January 2018.

CNY and MXN, the currencies most affected by Trump’s presidency, were both rallying in response to the news of Biden’s win.

CAD was the best-performing currency, and this time it doesn’t look like it’s entirely due to oil prices (although oil is indeed higher this morning). CAD is also benefiting from the end of the Trump regime.

On the other hand, the dollar is suffering as a result. Whether this is due to the usual “risk-on = weak USD” reaction or more fundamental concerns about the US currency, I don’t know. I spelled out in my Weekly Outlook why I think this combination of a Democratic presidency and (possible? Likely?) Republican control of the Senate is the worst case for the dollar – worse even perhaps than if Trump had gotten another term. Basically, it boils down to my expectations that the Republicans won’t cooperate with fiscal policy, so monetary policy will have to carry the burden of supporting the US economy.

JPY was the other major underperformer in this “risk-on” mood. As a result, AUD/JPY was unusually active this morning, according to CLS Group, a leading currency settlement company.

EUR/USD gained and is hovering just below 1.19. There’s over EUR 3bn of options expiring at that strike price today and market particpants who wrote calls at that level are trying to prevent it from going through. If it does, it’s likely to go substantially higher as the sellers hedge their positions.

If you want to know what kind of crazy markets we’re seeing now, Greek two-year bond yields went negative this morning (just -0.01%, but still…) Back in March 2012, Greek bonds of this maturity yielded 220%.

Not much on during the European day today. We’ve already had the German trade balance, which in any event isn’t that big a deal for the markets. The trade surplus beat expectations at EUR 20.8bn vs  Eur 16.0bn expected (EUR 12.8bn previously).

The Swiss National Bank (SNB) appears to have cut back on its intervention again, as EUR/CHF remained fairly stable. 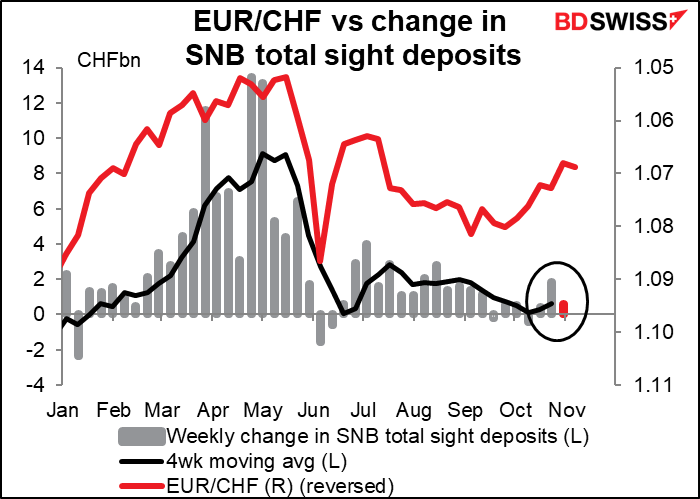 After that it’s just a couple of speeches on the schedule.

Then once in the orient when the gracious light lifts up his burning head, we get a whole bunch of indicators.

Japan’s current account balance is expected to show a slightly higher surplus on a seasonally adjusted basis. In theory that should be positive for the yen. 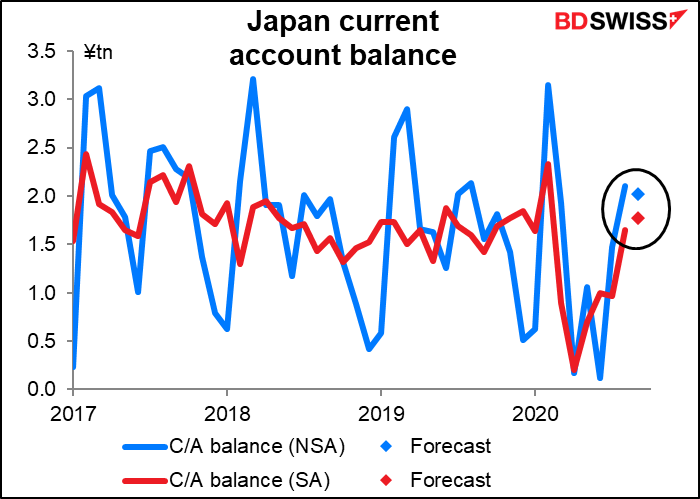 I have to admit though…does it really matter? I used to track Japan’s basic balance as an indicator of where the yen was headed [the basic balance being the current account balance plus longer-term financial flows, such as direct investment (narrow basic balance), and equities and bonds (broad basic balance)). Unfortunately there doesn’t seem to be any connection nowadays. On the contrary, the relationship seems to hold up better upside down – that the yen seems to strengthen as the basic balance moves against it. Yet another economic fundamental that’s gone out the window in the last few years. 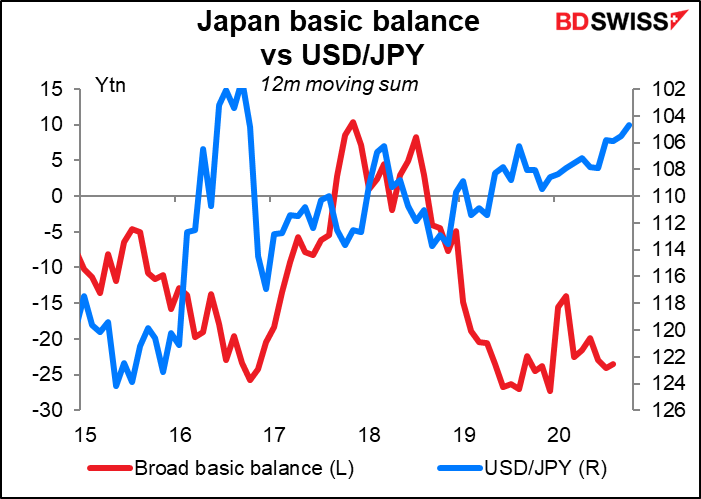 China’s inflation data is expected to show a continuation of the recent trend: consumer price inflation falling, producer price deflation narrowing. That’s good news for central banks around the world, because Chinese producer prices are a big determinant of other countries’ import prices. I haven’t seen that it directly affects any other currency though. 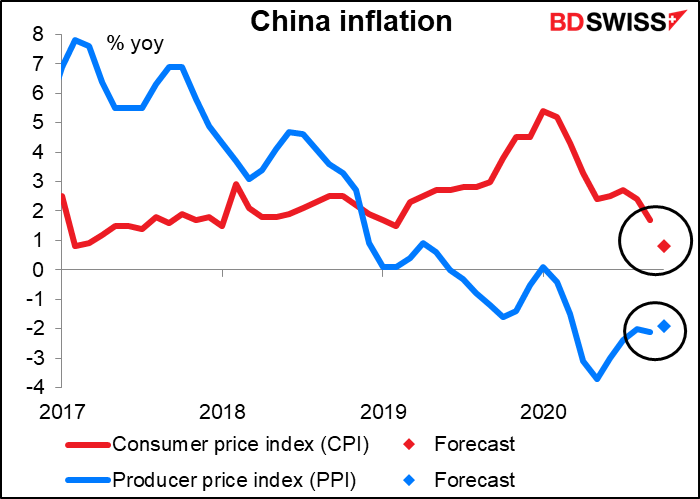 But insofar as inflation is an indicator of economic activity, lower inflation may indicate a soft economy – or more pigs, in China’s case, as food makes up an estimated 20% of the CPI basket and pork is the largest single component of that (estimated at 2.5% of the overall CPI, although the exact weights aren’t revealed). But as the graph below shows, it’s not just food inflation that’s slowing – excluding food, inflation was down to zero in September. That’s a sign that things aren’t entirely back to normal in China yet. 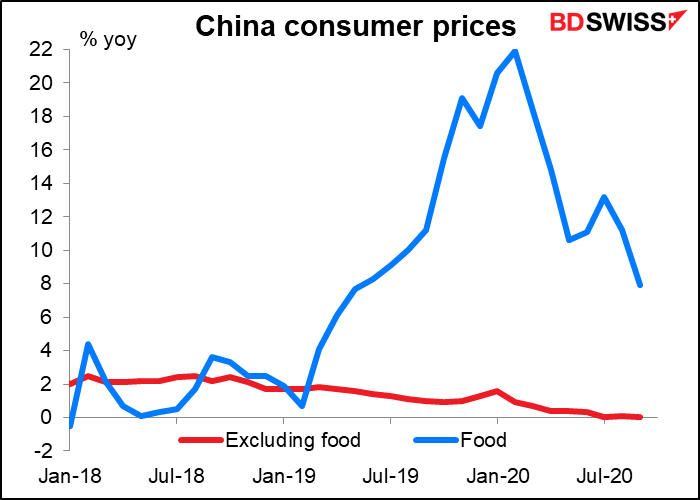 Japan’s Eco Watchers’ survey is expected to show these grass-roots observers of the service sector (taxi drivers, barbers, waitresses) back in “optimistic” territory for the first time in two years. Could this portend a recovery in the closely watched tertiary sector index or the service-sector purchasing managers’ index, which remains stubbornly below 50? Alas, no one cares. This indicator has the lowest Bloomberg relevance score of almost any indicator I’ve seen. But I should think this would be good for Japanese stocks at least, that is, if anyone were paying attention. 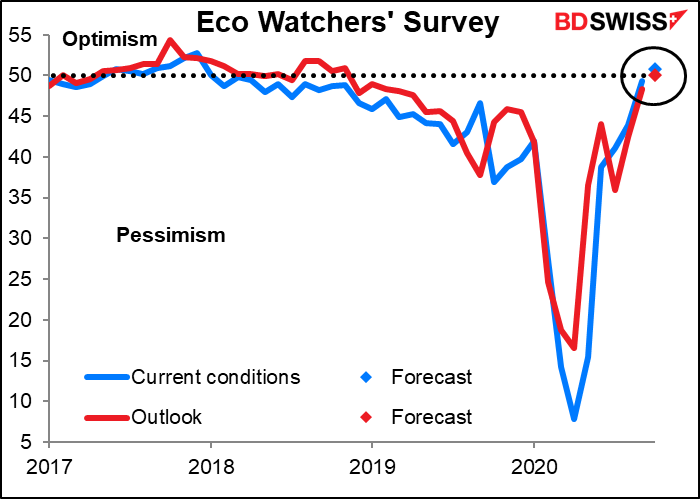 Then we wait for the sun’s diurnal journey to bring it over the English Channel and illuminate the UK employment data. The Bank of England has freely admitted that the economy is slowing, and it would be no surprise to see that reflected in the employment data. The focus this month is likely to be on the unemployment rate, as the trend there isn’t clear and the data has been volatile. Companies were reducing jobs as the scheduled end of the furlough scheme on 2 December approached, but the Chancellor last week extended the scheme for five months. That should keep the unemployment rate lower for longer, but at considerable expense to the UK government.

A sharp rise in the unemployment rate in line with the market forecast might be negative for the pound, I would think. But at the same time, the focus this week is likely to be on Brexit, not economics, as the deadline there draws near. 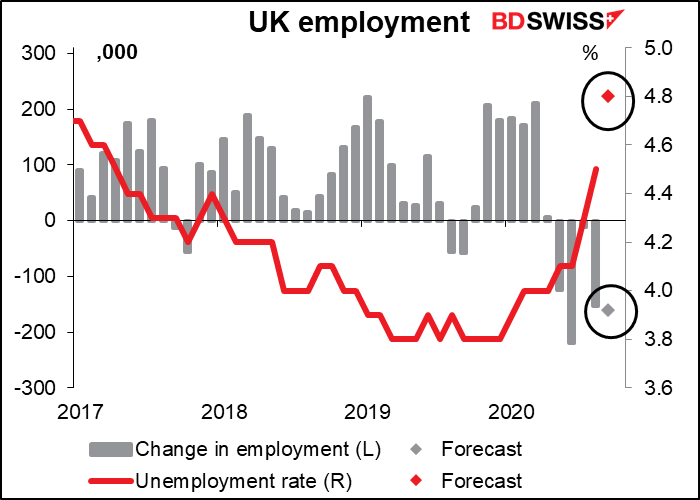 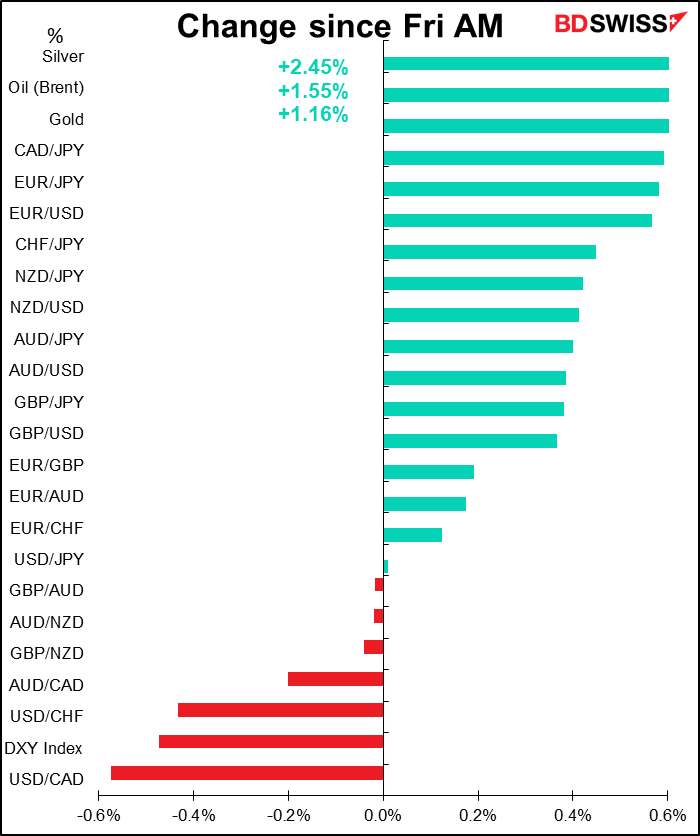