You are at:Home»MARKET PREVIEW»USD Down as Fed keeps Rate Forecasts Unchanged; Bank of England, Bank of Japan, US jobless claims

Yesterday’s meeting of the Federal Open Market Committee (FOMC), the rate-setting body of the US central bank, clarified how the group will react to changes in the economic picture in the context of its new flexible average inflation targeting (FAIT) framework. This new reaction function requires a much higher level of pressure on inflation to raise rates than previously. Accordingly, the market is likely to revise its forecast for when the Fed might start normalizing policy. That’s bearish for the dollar, as we quickly saw.

But remarkably, the median 2023 dot was unchanged despite the improved outlook and inflation ending the period slightly above the Fed’s 2% target.. Last time, five out of the 17 Committee members saw higher rates in 2023; this time, seven of 18. That means most of the Members expect to keep the Fed funds rate unchanged through the end of 2023 despite faster growth, on-target inflation and unemployment below what they estimate is the sustainable level over the longer term (4.0%). It’s clear that they are indeed sticking with what they’ve said: they won’t raise rates pre-emptively, but only until inflation has exceeded 2% for some time. 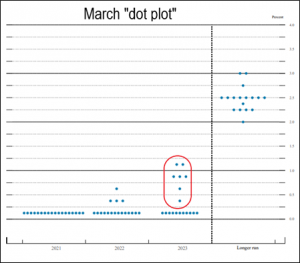 (Note too that four people saw higher rates in 2022, whereas last time only one did.)

The more aggressive forecasts raise the bar for what conditions they need to see before they start tapering down their $120bn-a-month asset purchases, because the forecasts establish a high benchmark against which they will judge whether “substantial further progress” – the prerequisite for tapering — has been made in getting the economy back to normal. In his press conference, Fed Chair Powell reiterated his previous comments that it’s too early to discuss tapering and that it will be “some time” before clarity on “substantial further progress” is achieved. He noted that they will need to see actual progress, not just forecasts of progress, to consider tapering.

As for the statement following the meeting, there were only minor changes to their assessment of the current situation. There were no changes to their assessment of the risks – they still say the virus “poses considerable risks to the economic outlook” – nor any changes to their forward guidance. The statement simply said that “Inflation continues to run below 2 percent” and made no mention of the likelihood of higher inflation due to base effects, which was reflected in the SEP’s 2.4% forecast for inflation this year.

Remarkably, the market didn’t adjust its view on the likely path of fed funds very much. The implied forecast from the fed funds futures only fell by about 1 bp across the curve. Clearly the market hasn’t adjusted to the new FAIT framework and the Fed’s new reaction function, not to mention the implication of President Biden filling the remaining vacancies on the Board of Governors with more dovish people. It may take a few more meetings before people learn that they’re serious about this. Note that projecting steady rates while assuming higher inflation is in effect forecasting lower real yields. That suggests to me that the dollar has room to fall further. 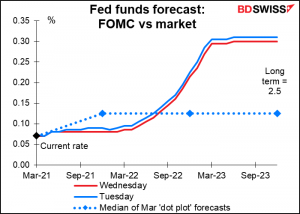 Against the background of a continued loose Fed, it’s no surprise that risk assets did well and that the commodity currencies benefited. I think we could see this trend continue today as I expect the Bank of England to remain similarly confident about the future.

AUD was also boosted by better-than-expected employment data this morning, with more new jobs than expected (+88.7k vs +30k expected) and the unemployment rate falling sharply to 5.8% from 6.4% (6.3% expected). 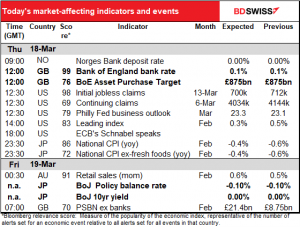 We have two major central bank meetings over the next 24 hours: the Bank of England today and the Bank of Japan overnight. I’ve dealt with them in depth & detail in my Weekly Outlook, The other Three of the Four Big Central Banks. Here I’ll just summarize my views:

Bank of England: nothing doing

The Bank of England, like the Fed, is expected to stay on hold for some time. The possibility of negative rates, which for some time has been the Sword of Bailey hanging over the market, has been priced out recently. On the other hand, the market thinks it might be two years before there’s a 10 bps hike in rates and three to four years before there’s a full 25-bps hike. Mark your calendars today! 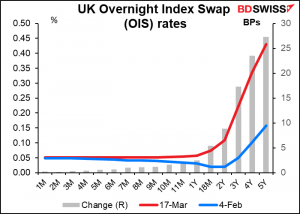 They could surprise us by announcing a reduction in their bond purchases, but I doubt it.

Accordingly, we will once again just be looking to see what they say about the likely pace of the recovery and any comments about higher bond yields, which have hit the UK Gilts market too. But even that’s not likely to be much of a surprise after BoE Gov. Bailey Monday said that the recent rise in rates “is consistent with the change in the economic outlook.”

Recently the pound has stayed within a normal range on Bank of England days when they don’t change policy. 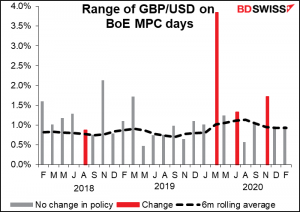 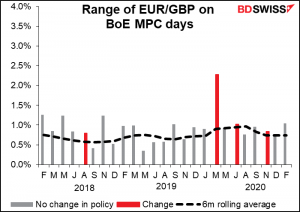 This is probably the most highly anticipated – and unpredictable — Bank of Japan Policy Board meeting since it introduced Yield Curve Control back in 2016. Nobody expects the BoJ to substantially change its monetary policy during the remainder of the Anthropocene Era. However, at the December Policy Board meeting they said they would “conduct an assessment for further effective and sustainable monetary easing… The Bank will assess various measures conducted under [the current monetary]framework and make public its findings, likely at the March 2021 Monetary Policy Meeting.” So tomorrow, will be the big reveal party when they will “recalibrate” their measures, as the ECB would say.

The review is likely to address three major themes, which Deputy Gov. Amamiya laid out in a speech last week. These are:

● More effective purchases of equity Exchange Traded Funds (ETFs)
● Alleviation of the adverse side-effects of the negative interest rate policy (NIRP), especially on the profitability of the banks; and
● Better functioning of the Japanese Government Bond (JGB) market.

The first might not have any direct influence on the FX rate, but it could influence the gradual trend of the yen if it means the Tokyo Stock Market will be better supported when it falls. That could reduce the “risk-off” periods that push the yen higher.

The second could weaken the yen directly if it means that they can loosen policy further. Their forward guidance says they won’t hesitate to take more steps if necessary to fight deflation, but everyone knows that’s impossible because of the impact of super-low rates on banks’ profitability. If they find some way to alleviate these problems then they could cut rates or expand their QE program more, although I doubt if they would do such a thing any time soon.

On the other hand, the third theme might require them to widen the trading band for the JGB market, currently limited to ±20 basis points in the 10-year sector (the so-called “yield curve control”). That could reduce the interest rate gap between JGBs and foreign bonds and reduce the attraction for investing abroad, thereby strengthening the yen. (Although to be fair, the Nikkei newspaper reported that they would probably only loosen it by 5 bps or so to ±25 bps, vs the 80 or more bps that some other countries’ 10-year yields have risen recently, hence it would by no means eliminate the appear of foreign bonds.)

Meanwhile, JPY is usually pretty quiescent on BoJ days. Probably people wait for them to announce something new and exciting, but they never do. This month though there is definitely the possibility of a surprise. If nothing else, BoJ Gov. Kuroda and Deputy Gov. Amamiya seem to have different views on what approach they would take to rejuvenate the JGB market, which is an important factor for the FX market too. 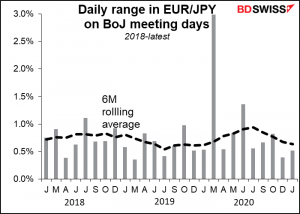 Other things in the news: We await the results of the European Medicines Agency (EMA)’s review of the AstraZeneca vaccine. Several European countries have suspended the use of the vaccine following reports of blood clots in people who were vaccinated. If they approve its use – which I expect, after the EMA said Monday that they thought the benefits outweighed the risks – that could relieve some concerns about EUR and push EUR/USD higher.

As for the indicators, the main one today is the dreaded weekly US jobless claims. They’re expected to be lower, but economists are being cautious about how much lower. Even though last week’s figure was much better than expected – -42k vs -20k as expected – they are still predicting this week’s will be down only by 12k, vs the four-week average of -34k. 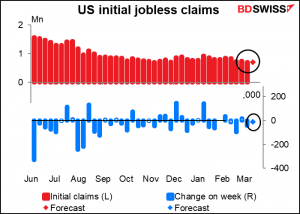 Continuing claims are expected to be down 110k. 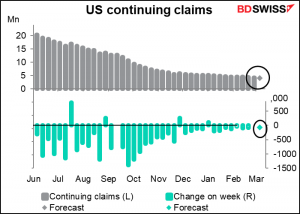 The Philadelphia Fed business survey is expected to be more or less unchanged. Tuesday’s Empire State index rose more than expected, to 17.4 from 12.1 (14.5 expected), but is still below the level of the Philly Fed index, so perhaps people feel the Philly Fed index is high enough for the current state of the economy. 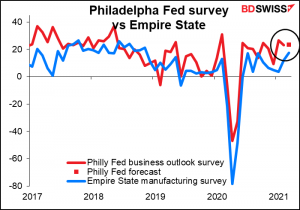 The US leading index has been trending lower since the big jump in May. The figures are consistent with a slowing recovery, which is indeed what we’ve been seeing. The NY Fed’s weekly economic index peaked in December and has been slowly trending lower. Japan’s national consumer price index (CPI) isn’t as closely watched as the Tokyo CPI, specifically the Tokyo core CPI (excluding energy and fresh foods), which comes out a couple of weeks earlier. In any event, the national deflation is expected to lessen a little bit as it did in Tokyo, but this is not necessarily significant. It’s nowhere near the 2% target and never will be during our lifetimes, as far as anyone can tell, so who are they kidding? 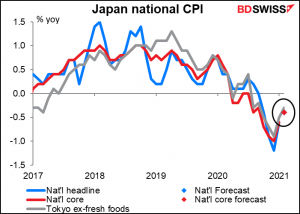 Australia’s retail sales are expected to be up 0.6% mom. Sales have been pretty weak recently. After the plunge in December there wasn’t much of a bounce in January nor does the market expect much recovery in February. Part of that is no doubt related to the “mini-lockdowns” in several states, including Queensland and Victoria, which both had one-week lockdowns in February. 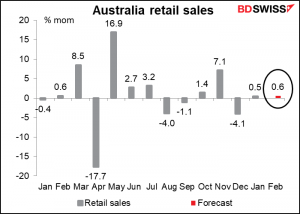 Still, Australia’s retail sales have generally outpaced those of other major countries since the pandemic began, so perhaps it’s no surprise if they’re slowing a bit now. 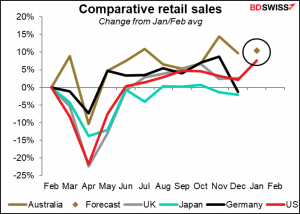 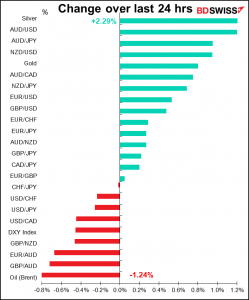