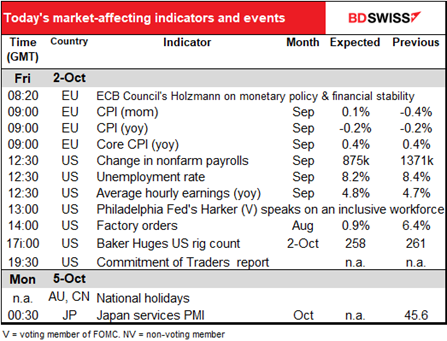 Tonight, @FLOTUS and I tested positive for COVID-19. We will begin our quarantine and recovery process immediately. We will get through this TOGETHER!

This is really serious.  Trump is 74, obese and has a host of other ailments that make him a prime candidate for the intensive care unit. I would expect him to be incapacitated for some time, at least. His age cohort has a 92% survival rate and he will be getting the best care available in the US. Nonetheless, a man of his age with his comorbidities is a serious case.

What happens if Trump dies before the election? Answer: like much having to do with the US election process, it’s not clear. It’s never happened. (There was one Vice President who died in late October, but the guy he was running with lost anyway.)

It might not be a problem, because technically people in the US aren’t voting for a candidate, they’re voting for electors who are pledged to vote for that candidate. The electors would just shift their vote to whoever the party decided, which in this case would probably be VP Pence (unless the Republican National Committee were to pull a fast one and run Ivanka!). The problem is though that each state makes its own laws about whom the electors can vote for. In some states, the electors are required by law to vote for the candidate. But if the candidate’s dead? Probably the Supreme Court would have to rule on that one.

But assuming Trump survives, there are still serious implications. Will he be healthy enough to carry on? He clearly had a host of other health problems beforehand. People who survive the virus often complain of loss of energy and muddled thinking. He already had heart problems allegedly, which might be exacerbated. He may have to withdraw for health reasons even if he survives.

And even if he’s healthy enough to continue, what message does this give to his supporters, who believed him when he consistently downplayed the severity of the virus, said it was going to “disappear,” and said his administration’s response to it was “perfect”? Moreover, Trump’s whole persona is based on an aura of “winning.” If he’s seen to be a victim, that might cause people to doubt the advice he’s been giving about the virus up to now. Disillusioned with their leader, they’re much more likely to vote Democrat.

The risk in my view is that he withdraws from the election and Pence becomes the Republican candidate. Then I think a lot of “never Trump” people who were willing to vote for Biden might decide to vote for Pence instead. That would complicate the outlook for markets. But what if they’ve already cast their ballot by mail? Oh dear…

But of course Pence never wore a mask when he was around Trump, so Pence may have the virus too…

What happens if both Trump and Pence are incapacitated? Then the Speaker of the House, Nancy Pelosi — a Democrat — would become Presitdent temporarily.

With all these new uncertainties, this is a big “risk-off” move for today’s market. I would expect the “safe-haven” currencies – USD, JPY and CHF – to rise and the commodity currencies to fall.

The day started with a “risk-on” tone as VP Biden’s improving prospects encouraged the markets. That put downward pressure on USD. However, later in the day the House approved the Democrats’ $2.2tn coronavirus stimulus plan, which has zero chance of passing the Senate. Although House Speaker Pelosi said talks with Treasury Secretary Mnuchin continue, the distance between the two sides is enormous – the Senate Republicans might balk at anything over $1tn.The seeming impossibility of reaching an agreement caused a “risk-off “ tone that boosted the dollar.

However, flows in the options market continue to reflect demand for protection against a further weakening in the dollar (except with regards to JPY). This indicates that the election is seen as a more important factor for the dollar longer-term than the fiscal problems. 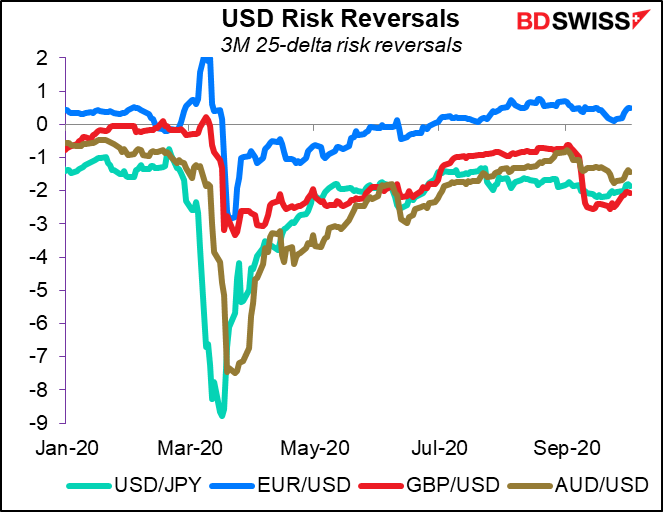 GBP was the focus of activity yesterday. It initially gained after a Financial Times reporter tweeted that a “landing zone” for state aid had been identified and that the difficult topic of fishing zones was the last sticking point. But three hours later, GBP turned around and fell sharply after an EU official dismissed the tweet as unfounded “UK spin.”

The next step will be to see what the chief negotiators — Frost on the UK side and Barnier for the EU — say today. It’s not the end if they don’t confirm that there’s a “landing zone” (= mutual positions that might provide the basis for an agreement) or that they’re “entering the tunnel” (intensified negotiations between small teams from the UK and EU, insulated as far as possible from the pressures of leaks and media scrutiny) this week. We just need to see that talks are likely to continue over the next few weeks until the EU Council meeting Oct. 15-16.

The Swiss National Bank (SNB) released its new currency intervention data yesterday. It turns out the SNB intervened to the tune of CHF 90bn in the first half of 2020, more than it did in the previous three years combined. Yet over that time EUR/CHF went from 1.085 to 1.064. In other words, all they did was manage to slow its appreciation, not stop it.

It’s nonfarm payrolls (NFP) day! The big excitement this afternoon. After Wednesday’s higher-than-expected ADP report, the consensus forecast for the NFP has been creeping up. Before the ADP report came out it was 850k; now it’s 875k.

I went over the NFP in excruciating detail in my weekly comment, but banking on the fact (?) that no one reads that, I’ll just repeat what I said over again and get paid for it twice.

The NFP is expected to be disappointing, which isn’t surprising as the weekly jobless claims figures have been disappointing, too. The third consecutive decline in payrolls is likely to be negative for the dollar, in my view. The only question is whether people are perhaps braced for a fall in jobs and therefore any rise could be taken as a positive. But no, the Bloomberg “whisper” number – which is just a guess from 64 random Bloomberg subscribers – is higher than the median forecast by economists. But it too is below last month’s level, so again, expecting a slowdown in jobs growth. 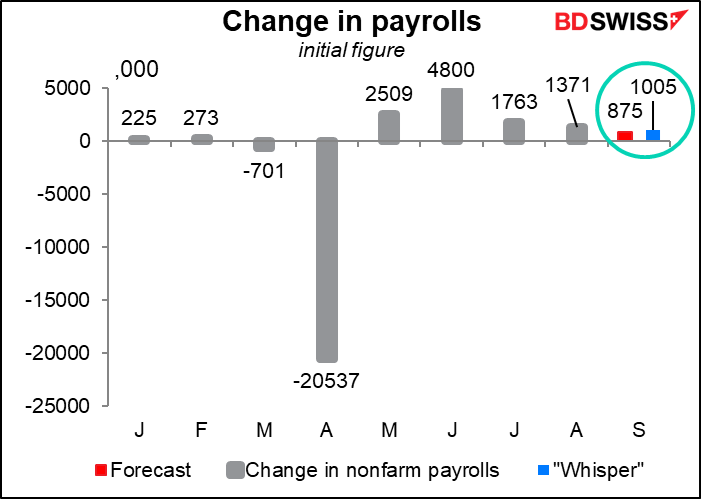 In my weekly I said “the announcement generates a lot of heat but not much light,” but actually that’s backwards – it generates a lot of light, as in the pixels on your screen certainly flash a lot, but the market often doesn’t heat up.   The market is often less volatile than usual on NFP days regardless of whether the figure beats or misses expectations. 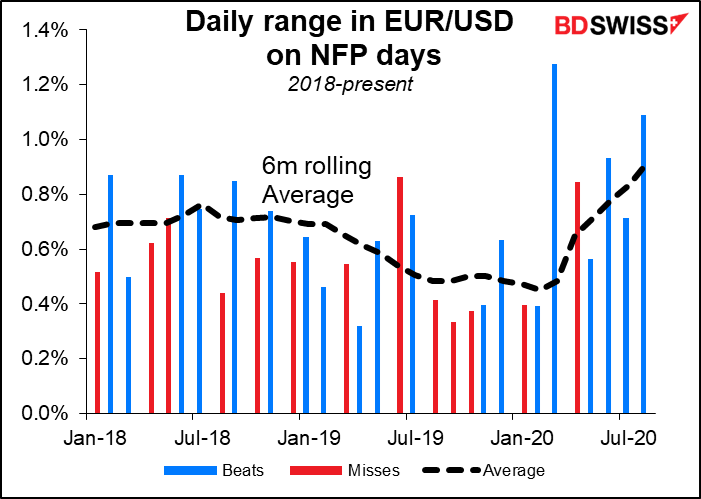 Average hourly earnings used to be big – often as important if not more important than the NFP itself – but now it’s so distorted, no one pays any attention to it. It’s distorted because more low-paid workers are losing their jobs than higher-paid workers, so it’s rising just because of survivor bias, not because people are getting paid more.

There are only a couple of other indicators out today. EU inflation is expected to bounce on a mom basis, but prices are expected to fall yoy at the same pace that they did the previous month. This follows Tuesday’s German inflation data, which showed the country falling back into deflation – the consumer price index (CPI) was -0.2% yoy, vs an expected unchanged yoy. But as I mentioned yesterday, the ECB is expecting deflation for the time being, so this won’t bother them. 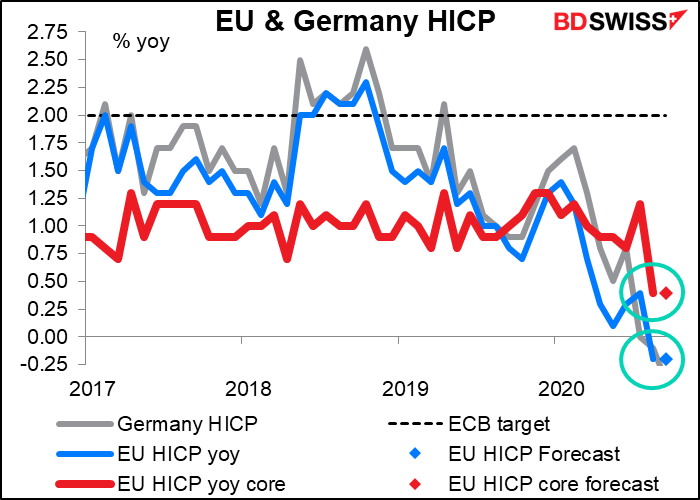 US factory orders are pretty much a function of durable goods orders.Nonetheless they’re still closely watched. 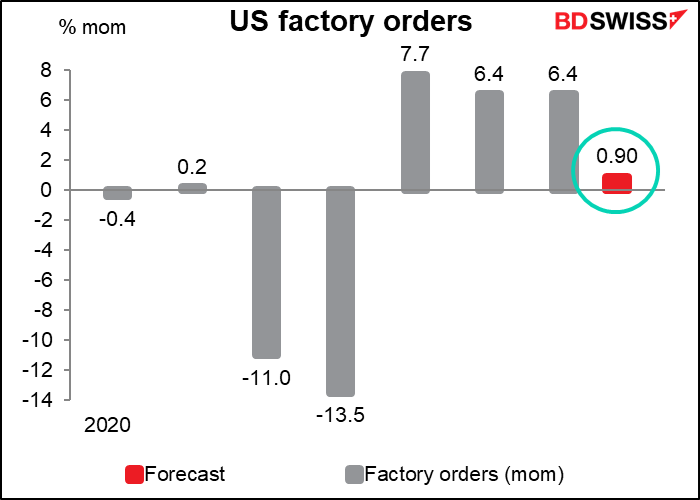 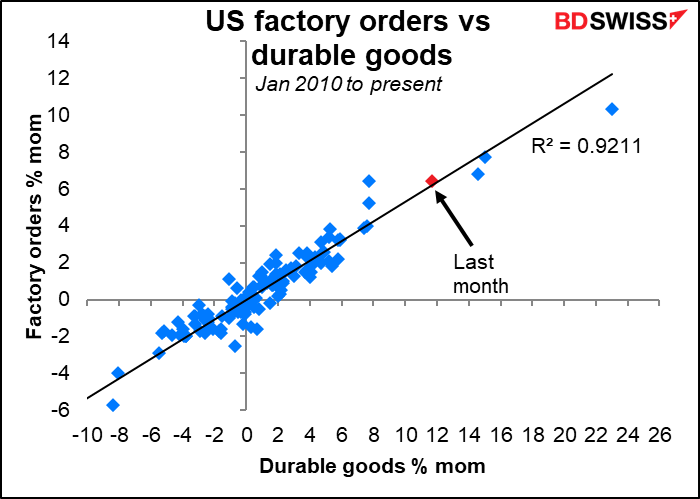 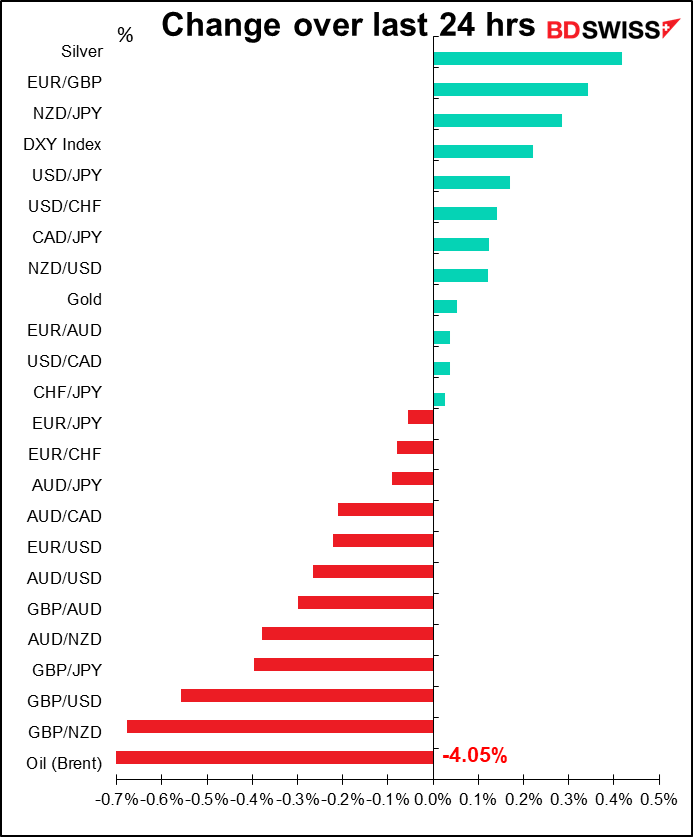